In the world of table tennis, when you hit a shot with wicked spin, it’s called putting “english” on the ball. It’s not dissimilar from what writers do, we spin words and ideas and emotions; we put “english” on our English. I thought it would be fun to combine the two, to have a conversation about writing while playing ping-pong. So I invited the writer and noted table tennis enthusiast, Geoff Dyer, to play a friendly game and have a conversation about our work. We both write fiction and nonfiction. We both like playing ping-pong. The idea was to create an experimental mashup of a fast-paced paddle sport and witty banter mixed with maybe a bit of actual serious insights into our writing and our writing process.

I picked Geoff up at his home in Venice and we headed to the cavernous Westside Table Tennis Center.

I am a decent enough player, I’ve even had a few lessons with former US Women’s Champion and Table Tennis Hall of Fame inductee Wei Wang; but Geoff is a very good player, in some ways a complete player with a strong power game and an arsenal of tricky spin shots. He’s also a lefty, which means his strongest shot, his forehand smash, plays to my backhand. My backhand is, if I’m being generous, unreliable, and makes me look like a drunk attempting to fend off a swarm of bees. My best shot is a forehand loop—a stroke that looks like a soft lob, but carries a deceptive amount of topspin so that when the ball hits the table it takes off in an unpredictable way. Ideally my forehand loop would play to his backhand and be tricky to return. Which is all a fairly technical way of saying that our respective games don’t match well. Not that it mattered that much, we were going to be talking about writing. That was the plan, anyway.

I set my digital recorder on the table, pressed record, and we began to warm up.

I’d like to say that we brought the same intensity to our ping-pong as we do to our writing but that wouldn’t be true, we are much more intense about our ping-pong. For two writers who have nine novels, eight books of nonfiction, and three essay collections between them (the essay collections are Geoff’s) you would think we would have something to say about the writing life. The recorder reveals otherwise:

Geoff Dyer: I would recommend you not try that backspin shot. 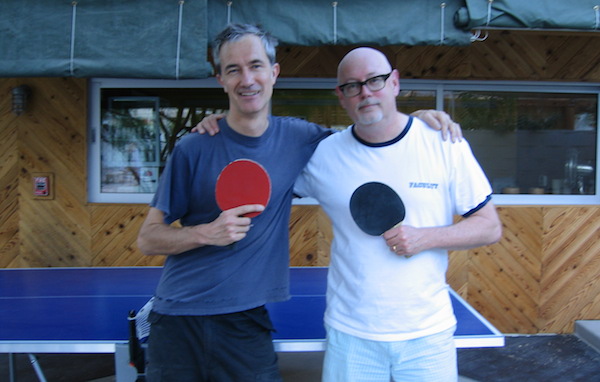 Geoff Dyer and Mark Haskell Smith. One of them is holding a dry paddle.

The recording is filled with sounds of balls and paddles, grunts and apologies (from me, mostly), and sighs of exasperation (from Geoff, mostly).

More troubling, I couldn’t get enough spin on my forehand loop, which allowed Geoff an easy kill. I was saved when Wei, the aforementioned US Champ, came over and examined my paddle.

I didn’t know paddles could dry out, but apparently the rubber loses its sticky quality over time. Wei gave me her paddle and my game instantly improved. The forehand loop began working and I could deal somewhat more effectively with Geoff’s backspin shots. Which is not to say that I was suddenly beating him—Wei’s racket was not magic—but our rallies were lasting a bit longer and I was presenting more of a challenge. Which was fantastic from a table tennis point of view, but disastrous for a literary conversation.

With the score egregiously lopsided in Geoff’s favor, we realized we’d covered the burning topic of my backhand and chop shot but not how we approach our fiction and non-fiction differently, and what it means to put yourself out in the world as a participatory journalist. Geoff’s last book, Another Great Day at Sea, is about his two-week stint as a writer-in-residence on board an American aircraft carrier. I had intended to ask Geoff how he approached such an unusual experience. I wanted to compare notes, to see which experience would be potentially more unsettling: being in the heart of the military/industrial complex or, as I did for my new book, Naked at Lunch, shopping for groceries in the south of France in the nude. But when faced with an onslaught of backspins and smashes, well, there’s not a lot of time for journalistic inquiry.

When Geoff crushed another forehand winner, we decided to put the recorder away and play without the burden of trying to sound interesting. We could chat in the car on the ride back to Geoff’s house.

But there was an accident on Olympic Boulevard. A bad one. The recording reveals us commenting on the traffic, the accident, and which route would be the best to avoid the gridlock caused by the pileup; all punctuated by the voice of the GPS admonishing us for ignoring the directions provided by the route guidance system.  Here’s a representative snippet:

Geoff: It wants us to turn left.

MHS: There’s no way we can turn left. Look at the traffic.

Geoff: It does look fairly impenetrable.

Further listening reveals several attempts by both myself and Geoff to spark some semblance of a literary conversation. We talk about how we got started. Me writing plays in New York, Geoff writing book reviews in London. We tried to talk about my new book on nudism; how Geoff felt that he “could never do what you did in your recent book, for all sorts of reasons.” I dispensed some solid advice on sunscreen, “Any SPF over 30 is a scam.”

And while we did talk about some interesting writerly things—like how the “I” in immersive nonfiction can be a literary construct as much as a character in a novel—these insights sound weirdly out of context in a conversation distracted by the traffic, the robotic chatter of the GPS, and our own private jokes that are not suitable for publication.

After reading through the transcript, Geoff sent me an email and said, “Sorry, I should have realized at the outset that unless I’m in an artificial environment—on a stage in public—I am incapable of serious discussion, especially with a friend. But the lure of ping-pong was too strong.”

It occurred to me that this entire endeavor, this complete and utter failure, was, essentially, a representative Dyerian undertaking. In what is one of my favorite books, Out of Sheer Rage, Geoff starts off intending to write a serious study of D.H. Lawrence and becomes side-tracked by life, by entropy, by his pursuit of pastries. And while he fails miserably at an academic examination of Lawrence, he ends up creating one of the best books on writing and the writer’s life ever written. Perhaps failing to do the thing that you set out to do, and coming up with something different, is just what it means to be a writer.

Mark Haskell Smith’s Naked at Lunch: A Reluctant Nudist’s Adventures in the Clothing-Optional World is out June 2, from Grove Atlantic.

Mark Haskell Smith is the author of six novels with one-word titles including Moist, Salty, and Blown; as well as the non-fiction books Heart of Dankness: Underground Botanists, Outlaw Farmers, and the Race for the Cannabis Cup and Naked at Lunch: A Reluctant Nudist’s Adventures in the Clothing-Optional World. His work has appeared in the Los Angeles Times, the Los Angeles Review of Books, Salon, Vulture, Alta, and Literary Hub. He is an associate professor in the MFA program for Writing and Writing for the Performing Arts at the University of California Riverside, Palm Desert Graduate Center.

The Poet on His Island 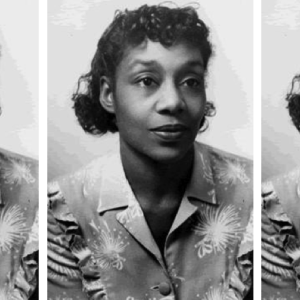 Mark Haskell Smith and Geoff Dyer play ping-pong together. | Literary Hub If you’re having trouble keeping up with...
© LitHub
Back to top
Loading Comments...