"I am still in Baghdad. I almost died yesterday, and the day before, and am tired and stressed."

Via Penguin Press
By Lynsey Addario

so nice to hear from you. i’m doing well. still chasing explosions almost every day, though it seems quiet strangely. we don’t usually find out about the bombs until three hours have already passed, and it makes the scene difficult to cover as a journalist. typically, the americans seal the area and keep us so far away that we can’t see anything, and the iraqis are so enraged about what has happened that they turn their anger on us.

i was going to call you yesterday because I had such a traumatic experience, but i decided against calling because often words can’t describe what i have seen. i was doing a story in the children’s cancer ward of this hospital in baghdad, where the hospital is in such bad condition that raw sewage mixes with the drinking water and patients end up sicker than when they first checked in. it is understood that there are hundreds more cancer victims in iraq since the gulf war, because the u.s. used bombs which emit depleted uranium, and many people in the country are now suffering from cancer. so, i went to the cancer ward, and it was so emotionally overwhelming that i couldn’t handle it. the first woman i saw was unrelated to these cases. she was the grandmother of a newborn with jaundice. the baby was the color of a banana, and the young newlyweds couldn’t even look at the baby as it screamed over and over. the grandmother just sat on the bed, alone, rocking the baby, and at some point, she started asking for the doctor, calmly, saying that the baby was cold. the nurse walked over and bluntly said the baby was going to die, at which point the grandmother, still alone because the parents couldn’t deal with the trauma, started weeping alone on the bed with her banana colored baby. i photographed her. the mother came in and stood off to the side. the grandmother continued weeping.

i then returned to abdullah, 11, who i had been photographing. he has leukemia. he wears a nike hat to cover his baldness, and is now too weak to hold a pencil. he used to be at the top of his class, and his mother just sat on his bed, complaining how he no longer can play, can go to school, can do anything but sleep and cry. the nurse called out his name to give him his daily medication dose before his chemo treatment, and his mother went over to collect 25 bottles of fluid to be injected in him for the day. one day. he lied on his side, swimming in this medication, and his mother started looking for a nurse to give him the chemo. we went into a bare room, where the boy started crying at the mere sight of the needles. apparently they missed his vein in his hand in the morning, and he was in a lot of pain. the mother, father, and doctor stood by the bed while another child with cancer waited behind him, bald, who had been undergoing treatment for three years already. Omar was about 12 years old. as the doctor put the needle in abdullah’s hand, he started screaming at the top of his lungs, and his father, a sturdy, proud, arab man, started crying as he tried to calm his son. the mother left the room. abdullah continued screaming. the father walked away to wipe his tears. i was crying so hard at this point that i just kept the camera in front of my face in shame, and I eventually had to go out on the balcony because i couldn’t stop crying.

then i thought how little it would take to help these kids and their families. maybe enough so they had medication or tissues or a cafeteria where the food wasn’t boiled in sewage. i don’t know, mom. I’ve seen so much money and so much poverty, and i can’t understand why they aren’t more equally distributed. 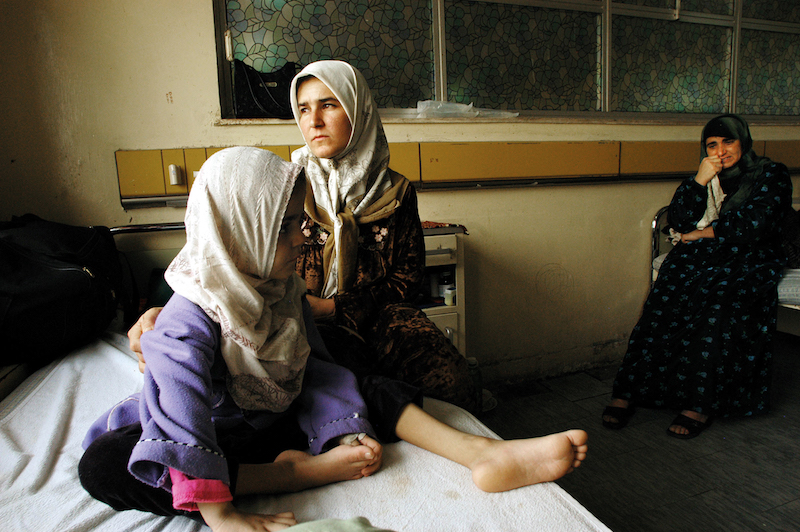 Miriam Hadi, 6, sits with her mother, and aunt, right, in the oncology ward of the Baghdad central pediatric hospital February 12, 2004, in Baghdad, Iraq. Miriam has Leukemia, and is blind and possibly deaf, and is from the Northern Iraqi city of Sulaimaniya. She and her family have travelled to this Baghdad hospital for treatment. Since the fall of Saddam Hussein’s regime in April 2003, the state of hospitals around Baghdad has declined, suffering from a continued lack of resources, cleanliness, electricity, among other things. (Lynsey Addario/Corbis, for The New York Times)

I am still in baghdad. I almost died yesterday, and the day before, and am tired and stressed, and counting the days before I can come home, or find the most deserted beach on earth (and possibly a boyfriend for rent), so i can sit down with some chilly margaritas and watch the ocean swallow my feet. this country has sunken into the depths of hell. there is the potential for a complete uprising against the americans almost any day now, and with every fight between the americans and the iraqis, it becomes more and more difficult to work. My judgement of what is dangerous and what is reasonable are so skewed right now that, last night, I drove into the middle of a gun-battle in Sadr City, the Shiite neighborhood in Baghdad, and skipped out of the car while my armed escort, a heavily bearded, former iraqi army guy, cowered in the front seat, adamantly refusing to get out of the car to offer me protection. Tires burned along the sides of the main roads, the air thick with black, rubbery smoke, and the streets were barren, save for the occasional man, warning any pedestrian who dared to enter Sadr City to get out. They were worried—‘get out, get out . . . pointed at my driver, qais, and I . . . they will kill you . . . she is a foreign woman . . . get out.’

I spotted Muqtada al Sadr’s office, in flames and at the end of an infernal road, and pointed my camera and began shooting. I had faith the Iraqis wouldn’t kill me, and was in this zone of immense concentration, when I felt qais’ hand heavy on the nape of my neck. I was confused . . . shots rang out, louder and louder until they were deafening, and qais started screaming, ‘the Americans are coming . . . tanks, Americans . . . ’ repeatedly. I had always had this feeling that in the end, my fate might be at the hands of the Americans . . . and this was the end, I was sure. The tanks plowed towards us, opening fire from I have no idea where, and I froze. qais, clenching my abeya, and wrapping arms around my waist, ran me into the nearest home which opened his door to us. Everything remains a blur. We scampered through puddles of raw sewage on the main floor, and I remember thinking of my obituary—she was found face-down in a puddle of raw sewage, and I got a bit depressed. I had a little bulletproof vest hidden under my abaya, with basically two plates that I had no confidence could save me from a stabbing much less tank fire. Qais and the Iraqi man led me up a concrete stairwell, up half a flight, and qais and I crouched low underneath a window, behind the continuation of the stairwell, him covering my body with his own. the owner of the house crouched directly beneath the window, and I thought—shit, I should be taking photos. Only in times like this do I actually pray and revert back to ten hail mary’s I once recited after my first confession, when I lied to the priest because I had nothing to confess. I told him I had stolen bubble gum and was instructed to recite the same hail mary’s I always start saying when I am about to die . . . maybe because it is the only prayer I ever actually learned growing up? the sound of tank fire ricocheted all around me, that I realized I am completely crazy. 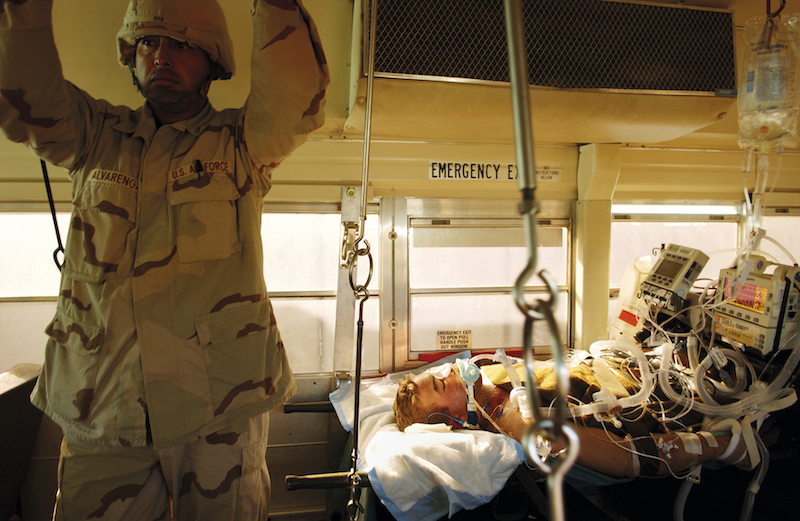 US Marines wounded in the Battle of Fallujah are treated by Navy doctors and prepared for evacuation to Germany at the Balad Military Hospital, Iraq, November 2004. (Lynsey Addario)

Freelance photographer Lynsey Addario and New York Times reporter Jeffrey Gettleman were detained at gunpoint on the road to Falluja today at approximately 4:00 p.m. Iraqi time. They were held for about three hours and later released unharmed, according to Times foreign picture editor Cecilia Bohan.

A spokesperson for Corbis, Addario’s agency, described the photographer as “shaken” but “fine and safe.” Addario and Gettleman were reportedly on the road to Falluja, a flashpoint in the violent Sunni uprising, when the abduction occurred. 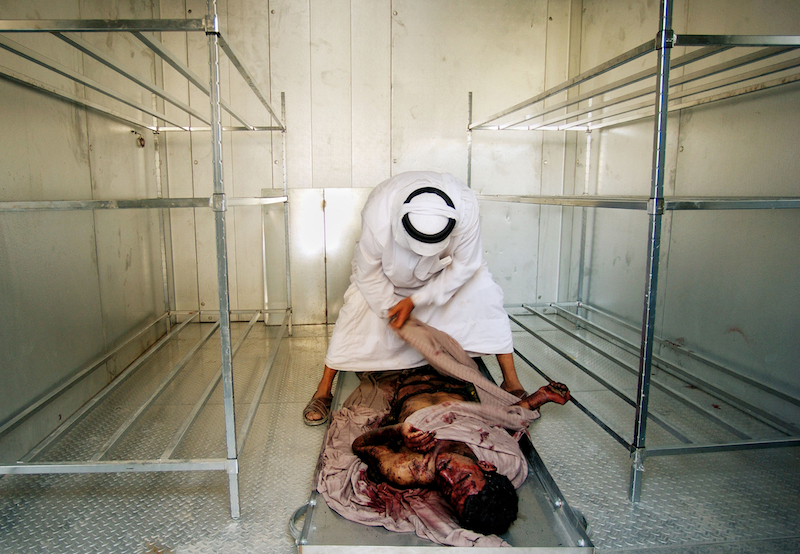 Abdul Munim Ali Hamood wraps the body of his only son in the Al Karama morgue after he was killed in this morning’s car bomb attack in Baghdad, Iraq, June 17, 2004. At least 31 Iraqis were killed this morning in Baghdad as a bomb ripped into a throng of men waiting today to sign up for the new Iraqi army. (Lynsey Addario, for The New York Times) 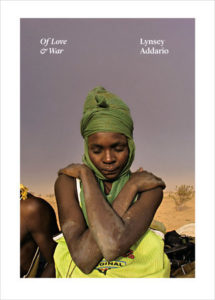 From Of Love & War by Lynsey Addario, published by Penguin Press, an imprint of Penguin Publishing Group, a division of Penguin Random House, LLC. Copyright © 2018 by Lukas, Inc.

Lynsey Addario is an American photojournalist whose work appears regularly in The New York Times, National Geographic, and Time magazine. She has covered conflicts in Afghanistan, Iraq, Lebanon, Darfur, and the Congo, and has received numerous awards, including the MacArthur Genius Grant and the Pulitzer Prize in International Reporting. 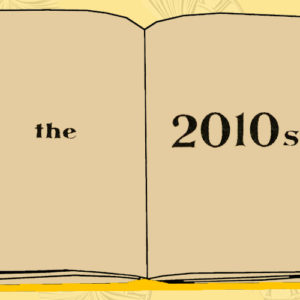 A Century of Reading: The 10 Books That Have Defined the 2010s (So Far) Some books are flashes in the pan, read for entertainment and then left on a bus seat for the next lucky person to pick up and enjoy,...
© LitHub
Back to top
Loading Comments...