Phantom Menace: Rereading “Turn of the Screw” Every Fall

I’ve done it so often I feel like Bill Murray in Groundhog Day, able to predict everything because I’ve seen it all before. I’m not as on the money as Murray is; my guesses are more open to interpretation, like the prophecies of Nostradamus (or simply like a person who makes good educated guesses based on observable facts). I know I’m going to see a lot of NYU students, some in the middle of their honeymoon period living in New York, away from home without any parents to bug them. Others, mostly the seniors and graduate students, seem more jaded, had hearts broken by New York, been evicted from an apartment because the basement houses an illegal matzo factory, or some other absurd “Only in New York” occurrence. There will be people doing things for money: playing the theme from The Godfather on the violin, juggling bowling pins, drawing in pink and blue chalk on the sidewalk, and some crust punks will make fun of the students whether they do or don’t give them spare change. And then there will be me: I’m the guy that every year during the first week of autumn can be found sitting on a bench in Washington Square Park, somewhere on the southern end, perfectly aligned with the arch straight ahead of me, reading my 1957 Modern Library copy of The Turn of the Screw by Henry James. I do this every year because it is my literary tradition. The exact same spot, 364 days between readings.

I’ve read a lot of Henry James: his novels, a hearty chunk of the essays and criticism, Michael Gorra’s Portrait of a Novel: Henry James and the Making of an American Masterpiece, some of his short stories, and a bunch of the film adaptations. Even though reading James—and his famously long sentences—can at times seem like a task, I find myself closing his books feeling I’ve had a great experience. Reading James requires no small amount of endurance, so I don’t think that I’d ever go back and read his books a second time (but don’t hold me to that), yet I crack open The Turn of the Screw annually. It’s not because its literary DNA can be found everywhere from Alfred Hitchcock to Kelly Link, or even because I’m trying to figure out once and for all if the evil lurking in its pages is human or otherworldly; it’s something more personal.

The first year I sat in Washington Square Park reading my copy of the novella—purchased at a little used bookstore in Great Barrington, MA. for seven dollars—I was a resident of the neighborhood, the same one where James was born and after which he titled his 1880 novel. Of course, much like the novel Washington Square, The Turn of the Screw was written long after James made the move to Europe, where he’d spend the bulk of his life until his death in 1916. James didn’t much like the New York City he’d left behind: in what could be considered one of the original “Goodbye to All That” essays, James revisited his old neighborhood to find that New York University had torn down his childhood home, and replaced 2 Washington Place with a “tall building, grossly tall and grossly ugly,” as he wrote for Harper’s in “New York Revisited.” The Turn of the Screw isn’t even set anywhere near Washington Square; it takes place in a spooky and remote old English country estate. Aside from the fact that it’s small and written by a local boy, and there’s a definitive seasonal feeling to it, there’s really no reason I should find myself in the same place starting the same book every year. It’s not that I get deeply into the story that lasts a little over 130 pages, it’s just something I have to do. I have to start The Turn of the Screw in Washington Square Park drinking a hot coffee at the start of fall. I have to hold up the tradition.

“It is light outside. Bright and clear. A good day for ceremony,” writes Ander Monson in his 2007 essay for The Believer, “Ceremony.” While Monson’s piece was more a meditation on the New Order song of the same name, Michigan, and the funeral procession of President Gerald through that state, I read the article during a turbulent time in my life, a period where, somewhat like James, I found myself leaving New York and moving back to a place I swore I’d left for good all with the hope of writing a book that would ultimately never get finished. The sun having set on a bright, clear early autumn day in Chicago I sat on a bench underneath a lamppost, my back to the Graceland Cemetery fence, the place where some of the city’s most influential figures are buried. I’d been spending my nights on that bench, glad I’d found such a quiet spot in a big city, albeit one where most of the people around me were dead, but also because I swore I’d seen some kind of canine on the grounds—maybe a guard dog or a roaming coyote—my first night sitting there. I wanted to know for sure, so I’d sit there for hours, waiting for the animal to come back, confident there was no way it could squeeze past the iron bars and attack me. I wondered if the animal I’d seen was real, something I’d imagined, or possibly some specter, some ghostly hound that roamed the grounds looking for its master.

It reminded me of that book I’d read in high school, the one by Henry James that I actually liked back then, the one where you couldn’t tell if a ghost or the governess was responsible for the book’s shocking ending. I definitely had seen something on four legs roaming the grounds a few nights earlier, it looked at me, thought for a second, and then turned around after making a huffing sound. As I sat there on my nightly stakeout with that copy of The Believer in my hands, my mind began to wander. I started humming the lyrics to the New Order song Monson’s article was named for (the best New Order song, which should’ve been a Joy Division song), and began to think of ceremonies and traditions. I sat there, possibly alone, possibly among the spirits or whatever roaming the grounds behind me, and I thought about how I didn’t have anything in my life to look forward to. I’ve never been close with my family, so I don’t have holidays I return home to, and I’m not much for religion, so the things I do on a yearly basis are few. As I sat with the dead to my back, I thought about how much I wanted to change that. I needed more constancy in my life, things I could tether myself to. I stood up, confident I’d set out to find those things the next day… But then I heard panting. I turned, and saw the animal’s eyes through the wrought-iron fence. It was gnashing its teeth in something like anger—and for someone who grew up with ferocious German Shepherds, and who has very little fear of dogs, I didn’t feel like sticking around to get a good look at whatever the Canis was had been watching me from the shadows. I got home fast.

Three years later, I sat on a bench in Washington Square Park with my new-used copy of The Turn of the Screw for the first time. I admired the neat mylar job over the book’s dust jacket, the perfect clear lined up by the hand of some obsessive type (cut from a roll and not one of the individual covers you can buy in a pack). It was pressed tightly as if bonded to the cover and I thought about how maybe someday I could read James’ ghost story to my own children from that same copy, if I took care with the book. I wasn’t reading it in Washington Square Park that first year thinking I’d establish anything, but I’d been starting to think more about traditions after falling in love with the person I’d eventually marry, thoughts that aligned with my longing for customs and ceremony. I cracked open the book to the opening words, “The story had held us,” and remembered that night outside the cemetery, how I’d vowed to institute things in my life I could look forward to, markers on the calendar that meant something to me, and eventually maybe to mine. I remember thinking—just before encountering what may have been a hellhound—how much I wanted those things in my life.

I kept reading, sitting where Henry James may once have sat, not realizing I was beginning a very personal tradition that would carry on to this very fall, that may—if I am lucky—carry on for very many years to come. 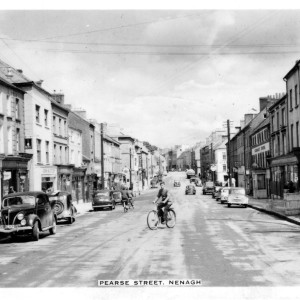 For the next 10 days Literary Hub will help in counting down the days until the seventh-annual Irish Arts Center PoetryFest...
© LitHub
Back to top