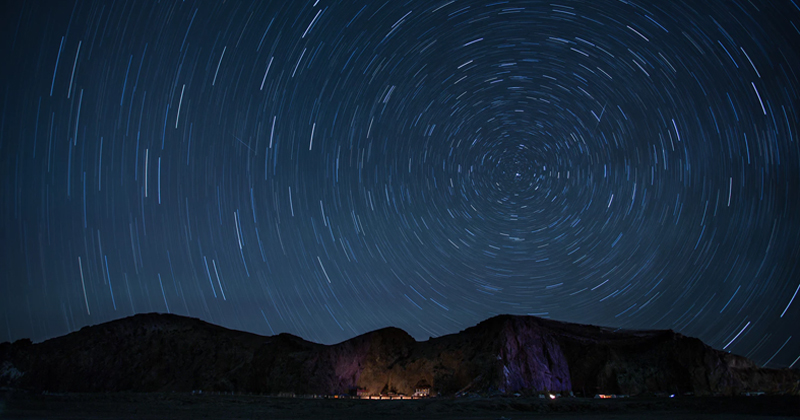 Peter Wohlleben on the Not So Secret Life of Stars

A Beginner's Guide to the Observable Night Sky

Night after night, you can observe one of the greatest wonders of nature from your garden, as long as the weather plays along. I have long been interested in astronomy, the study of the stars and other celestial bodies. In contrast to astrology, which deals with interpreting the future on the basis of the constellations, astronomy focuses on a scientific analysis of the universe.

A glimpse into the endless, dark expanse of space makes it clear how small and fragile our little rock called Earth really is. For this reason alone, it is worthwhile considering the celestial sphere of the night sky.

I find it especially fascinating to think that when we observe the night sky we are looking into the past. For the stars are nothing but very, very distant suns, whose light has taken centuries, if not millennia, to reach us. In the meantime, they have long since moved on, flared up more brightly or even burned out altogether. The constellations, including the 12 signs of the zodiac used by astrologers to predict the future, may well have already regrouped themselves into quite different arrangements—heaven only knows.

If you have a camera that allows you to adjust the shutter speed, then you can capture a long-exposure image showing the rotation of the Earth. Mount the camera on a tripod and point the lens at a section of the night sky, ideally due north. Set the exposure for as long as possible, hours if you can. Sometimes there is the option for a remote shutter release, meaning the shutter is only activated when pressed again. The resulting photo shows the stars as curved lines arching through the sky, because the Earth (and with it your camera) has spun on its axis beneath them while the image was being taken. The longer the exposure time, the longer the tracks will run in an arc across the sky.

When the air is clear, you can see up to 3,000 stars with the naked eye on a dark night. Which begs the question: Isn’t it dark every night? Well, no; in cities and residential areas where there are streetlamps, it clearly isn’t: the artificial light blocks out most of the view. But the full moon can also make it more difficult to see the stars, at least in that part of the sky.

When can we say it is night, after all? When the sun goes down, it’s dusk. The resulting half-light, or twilight, is the result of the Earth’s atmosphere. The sun is already beyond the horizon, but its light beams are refracted through the atmosphere and diffused into parts of the sky that are not directly in sunlight. This indirect illumination fades gradually, and depending on the season it can be one or two hours until it is finally pitch dark. It’s only then that the faintest stars become visible and that the Milky Way unfurls its pale band across the sky. In June, when the nights are their shortest, this true darkness lasts only four hours.

And what of the stars? They are distant suns so far away that even in the most powerful telescopes they still appear as mere dots. But when your eyes get used to the dark (and this can take up to 30 minutes), the dots reveal something else: you might be surprised to find that many of them are colored. Stars can be red, blue, yellow, or white, depending on their temperature and the type of radiation they emit.

You’ll see a lot more stars after a rain front has passed, when it suddenly clears up and the air is hosed down and dust free. If the sky is clear in the evening after a shower, this can be taken as a sign that the temperature will fall sharply the following night. Without the warming cloud cover, the evaporating moisture of the recent rainfall quickly cools the air close to the ground.

During a period of fine weather, on the other hand, a light haze often forms, which swallows the light of the fainter stars, especially near the horizon. In this case, poorer stargazing conditions and a slightly hazy sky indicate good weather the following day.

“When you gaze at the sky on a still night, consider the thought that everything is in fact racing around at top speed.”

The Milky Way is a remarkable sight. We are all part of an enormous disc-shaped galaxy containing hundreds of billions of stars, with many spiraling arms swirling around the center. From our perspective, the Milky Way looks like

a band streaking across the night sky, because we are looking through the disc from the position of our solar system in one of the spiral arms.

The Milky Way takes its name from its whitish appearance. It is made up of an almost endless number of stars, whose light blends to a foggy blur because of the huge distance. Only the nearest stars, the 3,000 dots mentioned above, can be seen individually.

Together with the stars in our “neighborhood,” our solar system (and with it you and me) is careening through space in a huge circular orbit around the center of the Milky Way, at a speed of more than half a million miles per hour. So when you gaze at the sky on a still night, consider the thought that everything is in fact racing around at top speed.

Shooting stars are the smallest heavenly bodies, if we can even call them that. They are regarded as a lucky omen, and to this day it’s customary to make a wish for the future if you see one.

Shooting stars, or meteoroids, are bits of dust and rock that are hurtling through the universe and that burn up as they pass through the Earth’s atmosphere. The glow as they burn up can be seen from very far away, depending on their size. You have particularly good chances of seeing one when the Earth crosses the orbit of a comet. Comets are just like huge dirty snowballs, consisting of ice mixed with dust particles. As the comet comes closer to the sun, parts break off, forming its characteristic tail, which is nothing more than a trail of debris left behind as it crumbles. The most well-known intersection of the Earth’s orbit with that of a comet occurs in early August, when we can enjoy the annual Perseid meteor shower. Hundreds of shooting stars are visible every hour: this is the debris shed by comet Swift-Tuttle.

Nowadays, it’s easy to confuse shooting stars with wandering satellites. These are illuminated by the sun and appear as tiny dots as they traverse the night sky, but at a second glance they can be distinguished from natural phenomena. Their trajectory is relatively slow, in contrast to how quickly a shooting star flares up and burns out. It is easy to follow the route of the satellite because you can track it until it disappears in the haze near the horizon.

Shooting stars cause a constant cloud of dust that rains down on us. This cosmic rain was, and still is, of great importance to the Earth (and, of course, to your garden): a considerable part of the water on our planet comes from larger orbiting bodies, such as comets, which smashed into the Earth way back in the mists of time. And even the tiny shooting stars add up to a staggering 10,000 tons that falls to

Earth per day. A tiny speck of that is sure to land on your flower beds or vegetable patch.

Phases of the Moon

There are more than a hundred different books on the subject of the moon and gardening, so I will go into a few other aspects. It’s undisputable that the moon influences life on Earth. The evidence most commonly cited is the tides. The moon and the Earth both orbit around a common center of gravity. The moon exerts a pulling force on the sea, creating a small bulge, or wave peak, of about a foot. On the side of the Earth facing away from the moon, a second wave peak is formed, but here it is created by centrifugal forces—the outward pull felt by a spinning object like a carousel. As the Earth spins throughout the course of the day, the wave bulge moves across the surface of the Earth, always on the side facing the Moon, and so does the corresponding bulge on the opposite side of the planet. And so the water washes up higher on the beach or pulls away from the shore as this bulge passes by. The rise of the seabed towards the coast means that a minuscule wave bulge might be exacerbated by a dozen feet, depending on the terrain, so that when the tide is in, for example on the North Sea coast, a stretch of beach two miles deep can disappear beneath the salt water.

Now, you might not think that your garden is affected by tides. Well, in fact, the moon’s gravitational pull tugs at not only the seawater but also the Earth’s crust. Over the course of the day, your garden can bob anywhere between 24 and 32 inches up and down without you noticing it. These movements are on such a huge scale and so consistent that they can only be discerned with complicated measuring devices.

With such forces at work on the ground and in the sea, it is not surprising that many marine organisms use the moon as a kind of calendar to spawn synchronously, the advantage being safety in numbers: predators cannot eat all the offspring if they all come at once. Depending on the species, it might be the full moon, the crescent moon, or the new moon (that is, complete darkness) that prompts the reproduction process in a given month of the year.

Might it perhaps be conceivable that even the organisms deep in the soil of our gardens use the daily rise and fall of the Earth as a kind of clock? Day and night, and the seasons of the year—which set the life rhythms for every species above the ground—have no impact on life three feet below the surface. Deep underground, it’s always the same temperature and it’s always pitch black. How do the thousands of species that live in these deeper layers order their lives? It may well be that the tidal forces are the only marker of the passage of time for these tiny creatures, but this has not yet been the subject of much research. And while many species remain undiscovered, let alone the focus of any scientific study, this topic may long stay shrouded in darkness. 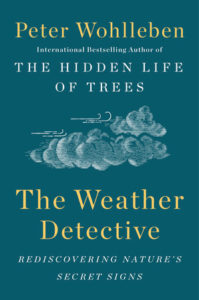 From The Weather Detective. Used with permission of Dutton. Copyright © 2018 by Peter Wohlleben.

Peter Wohlleben spent over 20 years working for the forestry commission in Germany before leaving to put his ideas of ecology into practice. He now runs an environmentally-friendly woodland in Germany, where he is working toward the return of primeval forests. He is the author of numerous books about the natural world including the New York Times bestseller The Hidden Life of Trees, The Inner Lives of Animals, and The Secret Wisdom of Nature, which together make up his bestselling "The Mysteries of Nature" Series. He has also written numerous books for children including Can You Hear the Trees Talking? and Peter and the Tree Children. 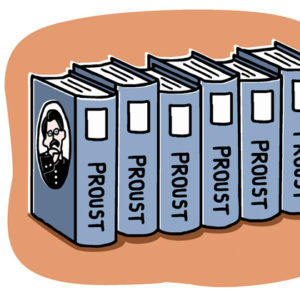 The following highly efficient summaries are from Abridged Classics: Brief Summaries of Books You Were Supposed to Read...
© LitHub
Back to top
Loading Comments...