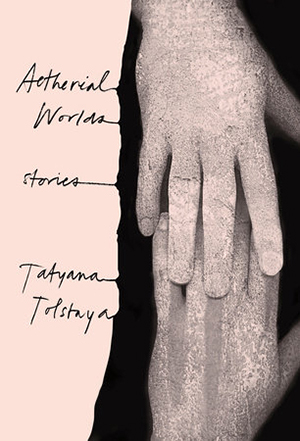 The following is from Tatyana Tolstaya's story collection, Aetherial Worlds. The 18 stories are a blend of humor and poetry, exploring politics, identity, love, and loss. This is Tatyana Tolstaya's first collection translated into English in over 20 years. Her previous books include White Walls, The Slynx, and Sleepwalker in a Fog. For 12 years, Tatyana Tolstaya was a host on The School for Scandal, a Russian talk show covering culture and politics.

Of course, there are rational explanations for this strange and selective disappearance phenomenon. Basically, three of them:

1. The washing machine sucks the socks in through the holes in the drum during the spincycle.

This explanation is ignorant and ridiculous.

2. Socks get entangled in the other laundry, perhaps slipping into the corners of duvet covers and staying there quietly, like flattened mice.

This isn’t actually so much an explanation as it is an attempt at avoiding one—every experienced doer of laundry, furious at yet another disappearance, shakes and turns all bed linens inside out. And besides, duvet covers must be ironed—there is no place to hide.

Nope, not imagining. I spent almost a decade in an apartment I absolutely loved, but all good things must come to an end, and I had to move out. The apartment was stripped bare to the wallpaper, and I ended up taking that down, too, by way of revenge on the new tenant, a young communist-turned-priest, who pulled some political strings to evict me unfairly, just as the rain did to the itsy-bitsy spider. Not only did I strip off the wallpaper, I also removed all the doors. So with everything open to view, in the corners, under the ghosts of beds and sofas, a few socks were recovered. Four socks, to be exact, unmatched.

I had long suspected that my washing machine was up to no good, so I developed a system: any unpaired sock that was extracted from it, instead of getting thrown out, was carefully stored in a special box. Times were tough—Soviet tough—good socks didn’t grow on trees, and I had two boys and my husband to think of: that’s six feet total! But I wasn’t saving these socks out of poverty or thrift, but rather out of spite. The machine’s name was Oka. She was semiautomatic. I hated her. And so, after recovering those four single socks and finding their pairs in my sock box, I counted the rest: there were forty-seven single socks. Forty-seven! That’s what my “Oka” had swallowed in eight years. So no, I’m not imagining. Not at all.

Other things dear to one’s heart also tend to disappear: they were just here, and now they’re nowhere to be found, but no one could have taken them, and there is no explanation for this. That little jar—it was just on this shelf! Where is it? Where did it go?

But never does it come to pass that you open up your closet and wham—there is an extra jar, out of nowhere. Or that a third boot suddenly appears next to an existing pair.

“Times were tough—Soviet tough—good socks didn’t grow on trees, and I had two boys and my husband to think of: that’s six feet total!”

So this means that the universe in not symmetrical! Someday I’ll write a story about its creation and describe the structure according to which it was built, as it presents itself to me. But not now. Right now, I’d like to say the following: If things disappear into “who knows where,” there must be a “there,” some unknown location where all this stuff is just sitting, piled high or neatly placed on shelves—we don’t know. Maybe that world is exactly like ours but in miniature; maybe it can all fit in a nutshell. Maybe all the missing things are stretched out lengthwise there. Or maybe they’re rolled up.

I have an apartment in Saint Petersburg. I don’t get to spend much time there. It’s like a dream—everything is in its proper place, nothing gets moved or changed. Sometimes my friends or my siblings spend the night there, but, out of politeness and tact, they

don’t move furniture around and don’t scatter their stuff, but rather glide through the still air, pulling up their legs so as not to touch the parquet floor. All they might leave behind is a package of smoked salmon in the freezer, as a pleasant surprise for when I return.

But lately someone has taken up residence in this apartment. He’s small. This year, when I went there, I found a tiny—no more than an inch or so—dagger, dirk, or something, I’m not sure. A black-and-gold naval one. I asked everyone who could have passed through the apartment, but no one knew a thing. They were all just as perplexed.

Then a little crystal ball with a short chain was found—also about an inch in length. What is it? I said to myself, full of dread from that sensation of a draft blowing in from another dimension. What is this ball? Multifaceted, the size of a big cranberry or an underdeveloped cherry.

Something transpired here while I was gone. Inhabitants from other worlds, parallel to our own or perhaps even perpendicular—Lobachevsky is dead and no one is left to calmly and kindly enlighten me—the inhabitants of these worlds were up to something in my apartment. They chose it as . . . what? A battlefield? And for what—sacrifices? Or romantic rendezvous? The latter appeals the most to my imagination. A male and a female, both small—ten inches in height, no more— arranged to meet here for a date, a romantic evening. He had a sword, she had a sparkly ball. Don’t ask me what that ball is for in their invisible, secret dimension, but clearly it belongs to the female—all you have to do is look at it. They met, were delighted, they talked, they loved—that much is clear. He unbuckled his sword, she cast aside her ball. And then someone spooked them, they made a run for it, they climbed over the fence, or over the prickly bushes, he held out his hand to her, she gathered up the hem of her skirt, and their hearts were pounding, their cheeks aflame. But they made it. Nothing else was left behind.

I took their belongings, set them out on a blue, filigreed saucer—I have one that dates back to an olden world that was drowned a hundred years ago. I put the saucer on top of the bedroom dresser, by the mirror; the reflection doubled their possessions. Let them come, let those looking-glass lovers return, I’ve saved all their stuff, they can retrieve it whenever they want.

I know that one day I’ll walk into the bedroom and the saucer will be empty. Except, perhaps, for a long, squiggly scratch made with an unknown object.

From Aetherial Worlds. Used with permission of Knopf. Copyright © 2018 by Tatyana Tolstaya.

On Finding a Hero in Alison Bechdel

10 Literary Classics We (Not So) Secretly Hate 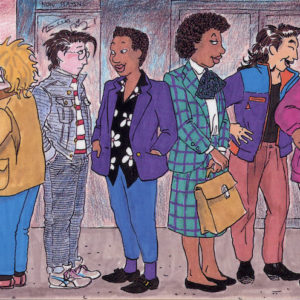 On Finding a Hero in Alison Bechdel Any culture has a shared set of something: rituals, values, heroes. It’s the glue that binds. Queerness has its own set of heroes:...
© LitHub
Back to top