Overhead at Literary Speed Dating: Scenes from the Center for Fiction

Kathleen Radigan on Looking for Love Among the Shelves

Just outside, the line for the bar extended, silent as a funeral procession. While waiting for his gin and tonic, one gentleman read from a fat volume of Rilke’s collected poems. The condensed nervous energy evoked a freshman-orientation mixer—and instead of mystery punch in solo cups, the crowd sipped Cabernet.

“Booking for Love” was a speed-dating event for literature enthusiasts conceived by the Center for Fiction’s brilliant PR & Marketing manager, Celeste Kaufman. This particular edition was targeted at heterosexual-identifying singles. (The week before, they’d hosted an LGBTQ event.) I’d never been to a speed-dating event before, nor had anyone else there who I spoke with.

Upon arrival, each guest received a sheet denoting their dates’ names. Throughout the night, they would place check-marks next to those they’d like to see again. Later, they’d hand in their sheets, and pairs who’d expressed mutual interest would receive congratulatory emails. For those of us accustomed to swiping in our bedrooms, this matchmaking ceremony felt quaint—a relic of our grandparents’ time. Why not lean in? One woman shrugged and said, “I went through a pandemic breakup. I’m dipping my toes back in.”

At around 6:15 pm, when most of the stragglers had shuffled in with plastic cups of wine, Celeste stood onstage and spoke into the microphone, “I think we can all agree that we’re here because we’re sick of the apps.” The participants chuckled, settling into their folding chairs.

Throughout the next two hours, each guest went on 24 mini-dates. At the chime of a bell, the chatter died down and an unmusical dance ensued: The men stood up and shuffled into the next seat, while the women remained. Most participants had brought copies of their favorite books as a conversation starter, so throughout their rotations, the guys toted dog-eared copies of Dante’s Inferno and My Year of Rest and Relaxation in their arms like transitional objects.

“There are just way too many Sally Rooney fans in this city.”

A few last-minute male no-shows skewed the ratio, so each woman sat alone for a few four-minute slots, half-listening to the surrounding chatter, scrolling on their phones, and applying lipstick. When they heard the bell, they looked up to find their next date waiting.

Astute readers know that four minutes is plenty of time to get to know someone. Characters reveal themselves through their mannerisms: the clasp of hands, the way they tie their hair up when they’re thinking. As I watched each pair learn to read each other, I felt a nebulous community forming. It is hard to feel it on the apps, but there is camaraderie in the pursuit of recognition. Like a good book, a good speed-dating event engages us in dialogue with a chorus of fully formed voices who reflect and expand our worlds. Like a hot spring beneath the small talk, I could feel it wafting up, coloring their inflections, forming prisms in their glasses—hope. 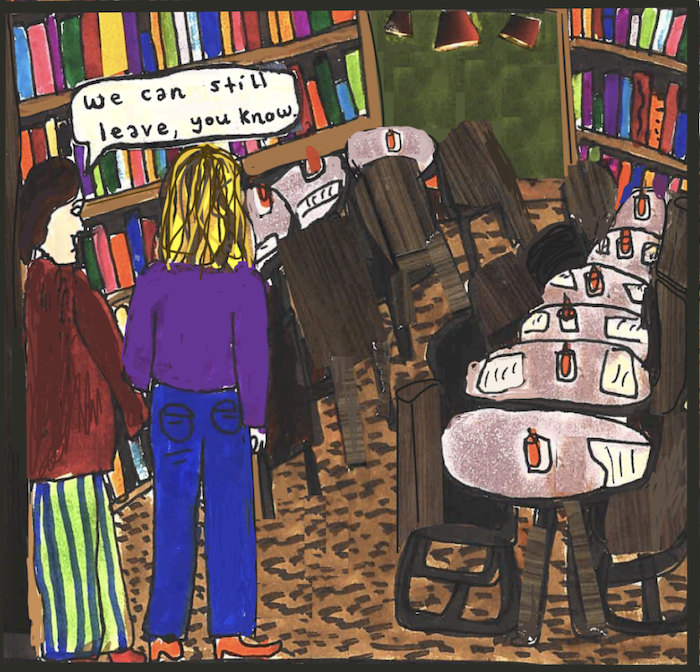 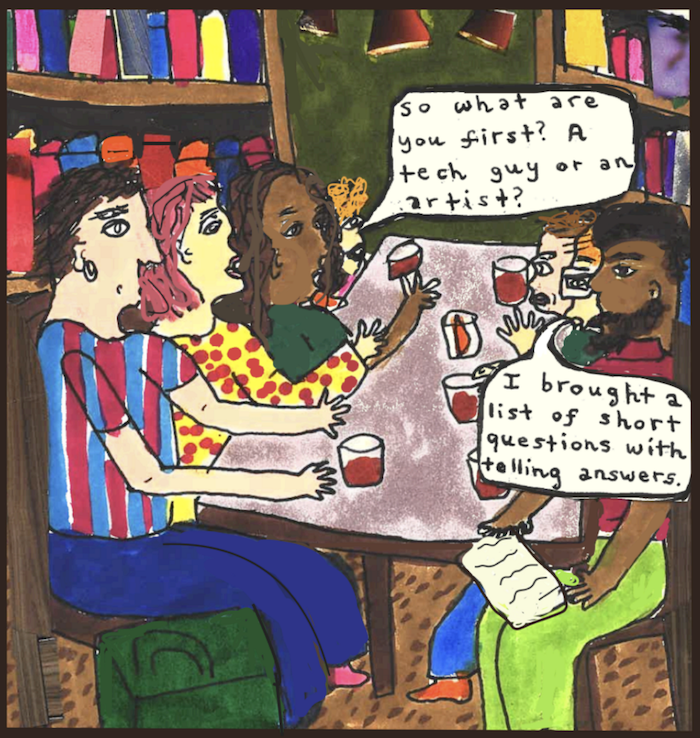 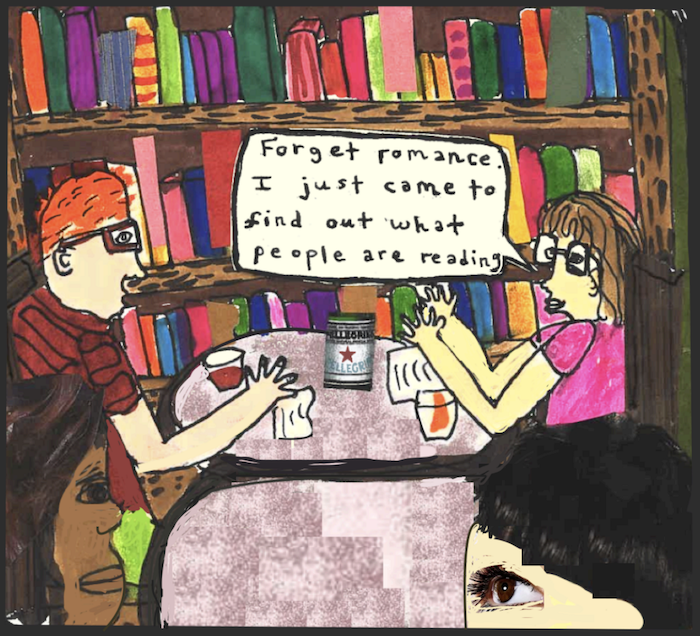 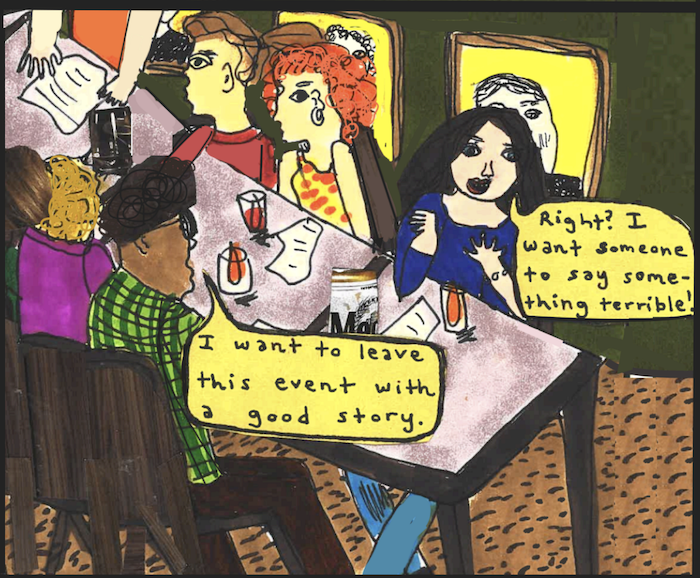 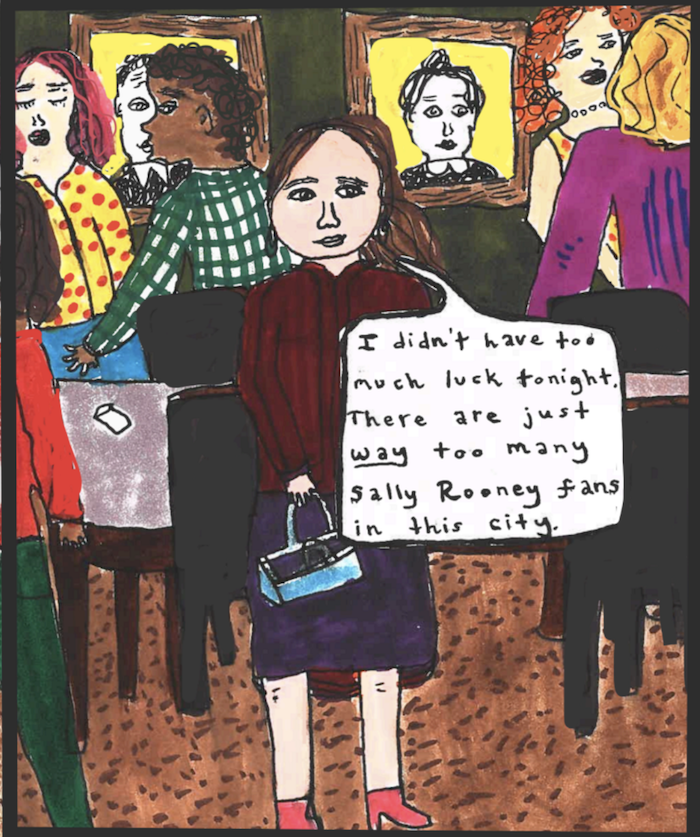 Kathleen Radigan is a writer and cartoonist whose work has been featured in The New Yorker, Guernica, The Sun, The Rumpus, and The Baffler, among other places. She teaches high school English in New York City.

David Yoon on Writing Racial Dynamics in YA Fiction 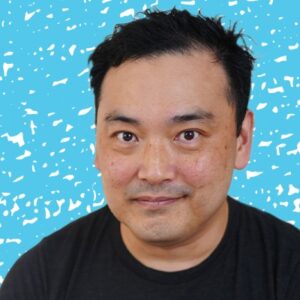 David Yoon on Writing Racial Dynamics in YA Fiction