Our Love of True Stories Has Destroyed Our Sense of Truth

Rebecca Wolff on Octavia Butler, Digital Emptiness, and the Unreality of the End Times

And then there is the trend or developing story of autofiction, a meta-practice as practiced by Sheila Heti and many others: what we make out of our self-narration which blends or deconstructs the tropes of real vs. true, me as a metaphor for me.

I am a poet and fiction writer and writer in general because I assume that I am just like everyone. My experience and the stories that I might tell about it, in the forms I choose to contain them, apply across the boundaries and differences, one to the other. I am not a writer because I assume that my life is so snowy, so flakey, that I will entertain others with those stories in their various forms, or that the qualities that they are imbued with need or deserve to be shared for their uniqueness. I tell them out of a conviction that “I” am a metaphor for “you,” and that therefore the language I produce by means of associative logics that pertain within my body and my heart and my soul will, however, externally disjunctive or “personal,” make meaning that is legible to you. This conviction is a difficult one to assert because it takes some degree of what we call “authority,” the quality or condition of believing or having faith in one’s self as an author, to hold that conviction and not effectively doubt it: effective doubt produces silence in which we keep ourselves to ourself.

I read a recent review by the revered memoirist Vivian Gornick of a novel by Sigrid Nunez. Her apprehension of the functionality of self-fiction or auto-fiction is refreshingly simple and perhaps best describes an opening through which we might arrive at a sense of sympathy for narrators who simply cannot spare the extra fancy to invent a whole other character:

I realized, reading these pages—which by the way strike the only awkward note in the book—that never once did I experience The Friend as a work of fiction, never felt the narrator was anyone other than the author herself or that anything she described hadn’t had its origin in some actual occurrence. From beginning to end, I thought myself engaged with what we now call the personal narrative.

So I ask myself what it is that makes a reader believe she can easily tell the difference between a fictional and a nonfictional narrator, and I am not asking the question rhetorically. I do not have some clever answer up my sleeve—I genuinely desire an answer to the question. Then I stop asking the question, because clearly there are times when the point is not worth belaboring. If the writing in a book is such that it moves the heart, stimulates the intellect, and enlivens the spirit, we can conclude that it is a work of literature—period—and as such is entitled to make its own laws. On that note I leave The Friend to go out into the world of the common reader, where it is sure to connect swiftly with its natural soul mates, of whom I am certain there will be many.

And then there is the trope of resiliency, within the struggle: the walking, the gathering of converts, the narrow escapes, the beautiful resourcefulness and growing trust established, mistrust overcome, what follows is the fiction of the reality of how hard it is and will be. “There is no end / To what a living world / Will demand of you.”

I read science fiction as a child because my older brother was a geek and a fan, and I enjoyed sharing not in his geekdom and fandom—I stayed cool—but in the pleasures of his reading, which visibly included immersion; absorption; occupation; stillness; quietness; peace. You sit and read a book for hours in a quiet spot, mostly undisturbed, in comfort and with activity around you but not disturbing your relationship with that book—you are not sequestered in that relationship because you are relating, through that interface, with another world—one which in the degree to which it successfully arrives at a complete metaphor for reality, allows us to feel more complete.

Fiction completes us. It reifies and enhances the intellectual need we have as humans to know that we are not alone; that our consciousness is shared and shareable. The mental action of metaphor, a kind of perfected translation not possible from language to language or from image to image as these are all contextually dependent and constructed, is a tool or muscle of intersubjectivity, the only subjectivity that will save us if we let it.

During the time I was reading the Parable of the Sower for my book club, in which we read only novels by living women authors except when we make the rare exception for a dead woman author, I was also participating in a fellowship in my community of the Hudson Valley called the Good Work Institute. This was, to put it bluntly, leadership training in regenerative capitalism. I have struggled to know how to describe it to friends and family; it was a six-month program in which “entrepreneurs, community leaders, and place-makers” of the Hudson Valley were variously instructed, entertained, and put through their paces to learn new tools and skills for connectivity and engagement. How, you may wonder, did I dare to identify myself as any of those: entrepreneur, community leader, place-maker?

The altruistic goal of the Good Work Institute is to make people who are already interested in doing good in their communities better able to do that good. Lessons in how to lead include lessons in how to collaborate; it’s the double-edged sword that Lauren wields so brilliantly as she walks her people north. We were put endlessly into excruciatingly rotating, self-selected pairs, a true trial for a sufferer of social anxiety to request partnership over and over and over. Speakers came to talk to us, international leaders in permaculture and the new economy and other imperatives against business as usual, business that extracts resources and competes ruth- and mindlessly. These were the most exciting, somber, heightened moments of the fellowship—when we came to feel the urgency with which we were being exhorted to step up our games, to assume the mantles that we all, possibly, have the capacity to assume—that we may all not be annihilated, starved, washed away in storms, oppressed by the racism that oppresses us all, the capitalism that has held us in our racism. The more serious it felt, the better it felt. To be an exemplary human in this context meant to “show up,” in the parlance of the day. How are you showing up, we are asked, when we check in with ourselves. As Lauren says: “It isn’t enough for us to survive, limping along, playing business as usual while things get worse and worse.”

Lauren as Sower is not a figure of exceptionalism—she is not a chosen one, not blessed or ordained. Instead she is an ordinary leader, a figure of the hidden fact that regular people are called upon to show extraordinary bravery and strength all the time. What is exceptional is how little we expect this to be true. “I don’t even know how to pass on what I do have,” she says, “I’ve got to learn to do that. It scares me how many things I’ve got to learn. How will I learn them? Is any of this real?” It is hard for me not to read this last question as a tip of the hat toward a metafictional meaning delivery system—which direction does not interest Butler much—the ways in which this story might know itself. As a science fiction it knows the territory of science fiction: “Cities controlled by big companies are old hat in such fictions.” As a parable it is firmly grounded and has no need for decorative flights of fancy other than the tropes of epigraph and chapter titles. The wisdom Lauren receives, that God is Change, and humans the partners of God, is a human wisdom, not divine, and she brings it to other humans not from an elevation but from a secure plateau.

The artist and writer Hannah Black, in reviewing a collection of essays by Ta-Nehisi Coates, says: “After Obama-as-symbol, there will probably never be a president in the fullest sense indicated by the Constitution ever again. The white Enlightenment that made its false universality possible . . . is dying of a congenital heart defect, and probably people not yet born will have to work out the many things that will come next. . . Contrary to Coates’s love of father figures, and in consonance with his appealing hesitance at being appointed to the office of public intellectual, no one person working alone, not even the most highly praised pundit, can know exactly what is to be done.”

This can prepare us for Lauren as our leader. A metaphor for our own selves leading. She is going to have to lead, is meant to lead, must lead. “To bury money and other necessities in the ground where thieves won’t find them.” “Money, food, clothing, matches, a blanket.” To make acorn bread. What we are going to learn from her is not literal, but real. “Tell me what I can do that won’t get me in trouble or make everyone think I’m crazy. Just tell me something.” “At last. Have you read all your family’s books?” “Some of them. Not all. They aren’t all worth reading. Books aren’t going to save us.” “Nothing is going to save us. If we don’t save ourselves, we’re dead. Now use your imagination . . . Even some fiction might be useful.” “She gave me a sidelong glance. “I’ll bet,” she said.”

The wholeness and health that Lauren represents is possible to find even in the face—and instrumental against the face—of despair/deconstruction/conditions AS THEY ARE. “Strange how normal it’s become,” she says, “for us to lie on the ground and listen while nearby, people try to kill each other.” The Parable of the Sower is a parable of our urgent need to get over what barriers there are within each of our minds and hearts to reconciling/waking up to the reality we are living in NOW, a stone’s throw. Lauren is that awareness we all spend so much of our time and mental constructs to keep at bay, and she is also the figure of our own individual capacity to respond appropriately to that awareness. Someone is hungry and eating a child’s leg nearby our campsite. Focus your mind. I am hungry and eating a child’s leg.

Wikipedia says that a parable “rests upon a single principle and a single moral, and it is intended that the reader or listener shall conclude that the moral applies equally well to his own concerns.” Reader, did you conclude from this parable that you need to wake up and prepare yourself? Prepare yourself to lead, and to be led. To read, and to be read.

Rebecca Wolff is a contributing editor to Lit Hub. She is a poet, fiction writer, and the editor both of Fence magazine and of Fence Books. She is a fellow at the New York State Writers Institute. 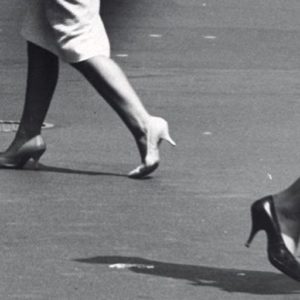 Power Walking Pretty Girl I am 20. I am walking along the King’s Road in Chelsea in London. It is the 1980s. Three men are coming towards...
© LitHub
Back to top