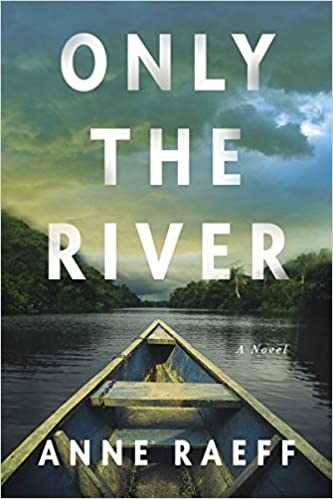 The following is excerpted from Anne Raeff's new novel, Only the River. Raeff's short story collection, The Jungle Around Us, won the 2015 Flannery O’Connor Award for Short Fiction. The collection was a finalist for the California Book Award and named one of the 100 Best Books of 2016 by San Francisco Chronicle. Her stories and essays have appeared in New England Review, ZYZZYVA, and Guernica, among other places.

When her parents returned from the jungle, their clothes caked in red mud, their breaths smelling of hunger, Pepa washed their clothes, stomping and rinsing them over and over again, the water flowing red like blood. Then she made a twelve-egg omelet, for the protein, and fed them mounds of rice and fried bananas. After the meal, which they ate dutifully and in silence, they slept for twenty-four hours straight.

Her parents began sleeping in the clinic. They had painted it a soothing blue like the eyes of an Alaskan husky, like winter. The house, they said, had a strange odor, something sweet that kept them up at night, gave them headaches. Pepa understood, however, that it was not about the smell. Rather, at night, when there was time to think, to remember their careers at the best hospital in Vienna, they needed not a soft mattress to lie upon or the sound of their children breathing in the next room but the certainty of steel instruments and the clean smell of alcohol. “We are just on the other side of the patio if you need us,” her father said every night before they retired to the clinic, where they spent the evenings listening to the radio, waiting for scraps of news about the war.

They were far from the dangers of Europe now, as far as one could be. At night they kept the louvers open just a crack, just enough to let the breeze in and keep the monkeys out. The monkeys were the only danger. They could destroy the house in a few minutes—pull all the dishes from the shelves, smash them on the cool tile floor, rip the sheets from the bed, urinate on the walls.

In the market, the cabbage woman did not even know there was a war on. “What are they fighting about?” she asked Pepa, and Pepa did not know how to answer her.

“They are fighting over Europe,” she said, and the woman smiled.

“They will regret it in the end,” the woman said. “They always do.”

At night, after Kurt had gone to sleep, she lay in her dark room listening to the sounds of the night—insects, monkeys, the rain. She imagined her parents lying on the jungle floor burning up with fever, clutching at the red earth, gasping for breath. She made herself look into their wide-open dead eyes. She lay there perfectly still, arms at her side, palms up, her heart beating slowly as if she were asleep. She would never be afraid again. That is what she learned when her parents went to where the yellow fever was.

Pepa began going out at night. She walked all the way to the edge of town to where the jungle began. She walked into the jungle, pulling the branches apart as she went. Each time she went farther and farther, but always she found her way out. She could sense the path, sense which branches she had touched before, and, always, she found herself back out on the dirt path that led to the town and the river. When she had mastered the jungle and no longer thought about the possibility of getting lost in its rubbery shadows, she began spending her evenings, after she finished her lessons, on the church steps. On Friday and Saturday nights she went to the plaza where the banda played and people danced and she watched, counting the steps, counting the beats. Gradually she moved closer and closer to the dancers. Every night she came a little closer until she stood among the young women who were waiting to be asked to dance, and on the second night, a somber young man approached her. “I am Guillermo and you are the doctors’ daughter, no?”

“Yes,” she said, and he led her to where the people were dancing.

That first night they did not speak again until after the banda stopped playing. Pepa concentrated on the music and on Guillermo’s hand pressed against her back. When the members of the banda had put away their instruments and the dancers had dispersed, Guillermo wanted to walk her home, but Pepa said that she liked walking by herself.

“You are not afraid?” he asked.

“Are you afraid?” she asked.

“You see, there is nothing to be afraid of,” she said, and she began walking away toward her house. That is how it started with Guillermo.

The next night Guillermo was waiting for her. “I thought you wouldn’t come tonight,” he said.

“Why did you think that?” she asked.

“I thought you were angry because I said that you might be afraid,” he explained.

“That is no reason to be angry,” Pepa said, and the music started, and Pepa took his hand and led him to where the other dancers were, and after the dancing was over they walked up the hill to the ruins of the Spanish fortress and looked out at the river. “Can you hear the rapids?” Guillermo asked, and Pepa nodded.

“Have you ever seen a jaguar?” Pepa asked.

“Only a dead one that my father had to shoot because it killed our pig.”

“I thought they didn’t come into settled areas.”

“It was a long time ago, before they cleared the jungle and planted the rubber trees,” Guillermo said. “I helped him skin it so he could sell the pelt. He went all the way to San Carlos to sell it.”

“I don’t know, but with the money he made he bought another pig.”

“And the body? What happened to it?” Pepa asked.

“We threw it into the river.”

“I wonder whether the body made it all the way to the sea,” Pepa said.

“It probably got hung up on some rocks or a fallen tree and was eaten by vultures.”

“It could have made it,” Pepa said. “I want to go deep enough into the jungle to see a jaguar.”

“Only the Indians know how to see them now,” Guillermo said.

“My parents went to where the Indians are.”

“And did they see a jaguar?”

“Only the Rama can see them.”

“It’s because they weren’t looking. They were busy taking care of the sick. A year ago, when I first came to El Castillo, I couldn’t see the parrots or the monkeys in the trees. I could hear birds rustling in the leaves, but when I looked up, I saw nothing but green, and then one day, I saw a parrot, a red and blue one, and then I saw that there were many of them, that the tree was full of parrots.”

“Do you really believe that, or are you just scared to go far into the jungle?”

They walked then to the edge of the town, to where the jungle started, and Pepa led him into the thickness of the jungle. “Close your eyes,” she said. “It is better to feel the way than to try to see,” so he closed his eyes and took her hand. Around them was the sound of millions of insects. After a while they stopped, and the sound of the insects grew louder, like applause or water plunging onto rock. Guillermo kissed her and she was not afraid of his tongue and his hands on her body, and she wanted to stay with him all night, wanted to lie down on the wet earth, but he turned around and began walking back, pulling her behind him, and soon they were out on the road and the sound of the insects grew distant, and the trees no longer protected them from the stars. “Don’t look up. The stars will blind you,” Pepa said, and Guillermo laughed, but he did not look up.

Excerpted from Only the River by Anne Raeff. Reprinted with permission of the publisher, Counterpoint Press.

Even in His Retirement, Philip Roth Wrote Thousands of Pages

20 new books to look forward to this week. 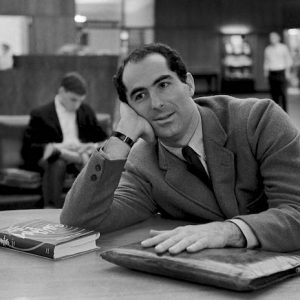 Even in His Retirement, Philip Roth Wrote Thousands of Pages To say Philip Roth stopped writing is inaccurate. He stopped making art. But his old way of coping with any embattlement,...
© LitHub
Back to top