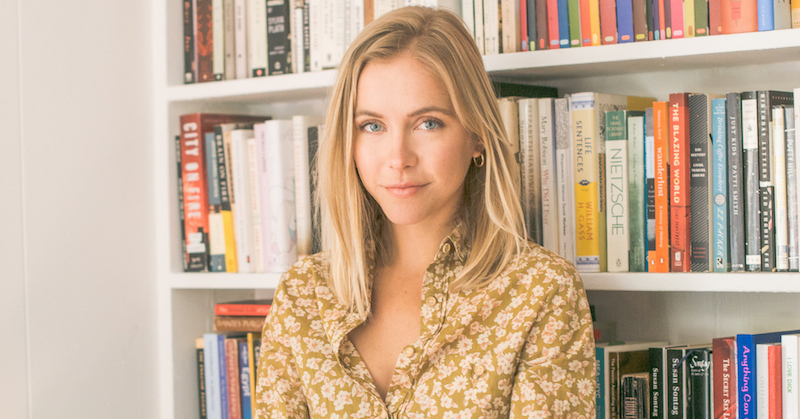 It’s the morning of Stephanie Danler’s book-release day, Tuesday, May 24th, 2016. She and I have an interview scheduled for 2pm Eastern time—although Danler now lives in LA’s Laurel Canyon, she’s in Manhattan for several launch events, including a swanky penthouse party that is the very contrast of the places she found herself in during her first year in New York City, 2006.

Back then, Danler worked as a “backwaiter” (read: busboy) at Union Square Café, an experience she’s used to great effect in her debut novel, Sweetbitter (Knopf). Her protagonist Tess may get to taste the finest wines and interact with a glittering clientele, but she also has to crawl beneath prep sinks to confront rot, filth, and fruit flies.

Danler moved on from service at that restaurant to a stint as a waiter at Buvette—where she met Peter Gethers, editor at large for Penguin Random House, and talked to him about her manuscript. In the interim she’d worked as a wine waiter at Tìa Pol and elsewhere, but more important, had earned her MFA at the New School and finished the draft of what would become Sweetbitter.

That meeting resulted in a two-book deal for Danler with Knopf. The icing on her artisanal cake? A few hours before we spoke, The New York Times published a glowing review of Sweetbitter, written by star chef (and fellow MFA) Gabrielle Hamilton. “When I saw that this morning I thought, I can never ask for anything again for the rest of my life,” Danler said to me. “No Christmas presents, no wishes, nothing! It is such a beautifully written review, too, and that is what is so exciting to me: To see a writer I admire so much write so well about my book.”

Stephanie Danler: What I was exploring with Tess was the minute movement between being a girl, and being a woman. Today—as opposed to even 20 or 30 years ago, let alone the 19th

century—when you’re 22, it’s the first time you’re not protected by an institution: College, hometown, parents. You have autonomy and you are confronting your destiny. I really wanted to explore the “becoming” process, a coming-of-age novel that doesn’t end in marriage and/or children, but in a woman expanding her boundaries. I resisted an epiphany or transformation at the end. Transitions are subtle, but they accumulate, and we group up. My protagonist is in the midst of that process.

BP: Transitions are subtle, too, between generations. Could you talk a bit more about why Tess in 2006 is on her way to something new?

SD: I think that now, especially in urban places, and New York City epitomizes “urban places,” the traditional ideas of what it means to be a grownup have given way to something different. It’s no longer about a steady job, owning real estate, establishing a family—it’s about experiences. Tess is fully part of a generation that one of my dining clients once described as “people who would give up their next 10 years for 10 more minutes of fun.” It’s true, and why shouldn’t it be? Our generation lives in a different cultural and social landscape. We don’t have the possibility of steady jobs and lots of real estate, yet we’re still aging; we still have to deal with the consequences of our actions. We still have to learn to apologize, to take up space confidently, to enjoy sex, to fight back, to not take everything at face value. We may experience things differently, but it’s still true that the loss of illusion equals a gain in knowledge. I believe Tess is at a stronger place at the end of the book, even if she takes one step forward and ten steps back over and over again.

SD: It was definitely a decision that I never wavered from. In my earlier drafts she didn’t even have a name, but giving her name back to her became an important moment of recognition of her as a character. I was working in the literary tradition of orphans moving to New York City full of unfocused ambition. They want to become themselves, but that involves reinventing themselves—Jay Gatsby is the obvious ancestor. You drop your past at the bridge!

Tess is a character created for the present tense. I needed her to be grounded in those early scenes; we need to know that she has some damage, even if that damage is unspecified. When you work in restaurants, this is the kind of thing you pick up on really quickly. You know that someone like Tess is sensitive and that’s she’s driven—she’s literally driven herself East! She has this kind of naivete that makes her much more courageous than she should be.

BP: Can you give an example?

SD: In her early interview scene with the restaurant manager, Howard, at one point she says “Enough.” That was when I thought, “There she is!” I knew that she had edges and boundaries, and that she was choosing to be entirely in the present tense, which is what gives her observations their immediacy. There was so much pressure to have her move from Point A to Point B to kind of seal the story off in a way that was satisfying but my priority was that the novel be true to real life.

She thinks she’s very powerful, and she finds that she’s mistaken. I needed her to be a work in progress and not a fairy tale “I healed myself!” kind of person. That’s not real life. We’re always negotiating boundaries and always making mistakes. There’s no grand catharsis. We’re a constant work in progress.

BP: There’s an element of autodidacticism for Tess, despite her degree in lit.

SD: What happens when Tess moves is a common experience: Her New York education takes over from her formal schooling. Despite a degree, Tess has no knowledge of things not in the mainstream canon, the things that New Yorkers get that make us feel like we’re living on the edge of whatever field we’ve chosen. In the places where Tess is from, people have often ceased being curious. But New Yorkers are still very curious, still pushing, still trying to grow. The people she’s meeting now don’t just go home from work each night and flip on the TV. That’s not who she wanted to be or who she wanted to meet. The entire novel is a sentimental education in poetry, in wine, in food, in love, in lust, in intimacy.

BP: The intimacy education isn’t always pretty, either—I’m thinking of Tess after a rough night out, but I’m also thinking of some of the rankness behind all facades.

SD: Messiness. The messiness of being a woman of that age! It can be hard to watch a character do that, but the sincerity of her wanting that experience is important in the same way it was important to me to represent the grittier details of restaurant life. Restaurants are really beautiful, but beneath their snow-white napery and polished glass is a dirty city of sewers and gutters and trash, all of which are a huge part of New York life. It’s the sweet and the bitter, the balance of all the highbrow glamor of her position: She gets to have foie gras as an afternoon snack, but she also has to dig through the trash to find her work shoes.

SD: I love that! That’s so good—and it’s so true, you have like your ten adjectives and your patented phrases. Oh Melville, he’s quite postmodern! Oh burgundy, there’s strawberries. . .

But when you get someone like my character Simone who’s walking the walk, who really knows her wines, you see how real knowledge strikes fear in people’s hearts. Howard, the manager, maintains his power through secrets, silence, and watching; he ruins Simone by withholding information and diminishing her rightly earned expertise. I wanted to show that fear because it’s the opposite of what “The Owner” does. The Owner (based, of course, on Danny Meyer) empowers and educates his subordinates. That’s the real way forward.

BP: Tess has a real issue with being a vessel. She wants and needs it but bridles against it, too. I think that’s important.

BP: How and when did you decide to leave restaurant service and get your MFA?

SD: It was not an easy decision. I had a very fulfilling fulltime career in wine service. I loved my life, but I came to New York to be a writer. At 29, my life felt like it was taking on a kind of permanence. I was married at the time and we were talking about having children. It was a now or never moment, a moment of desperation. And I do mean desperation. My marriage dissolved. It was a very fraught time. It doesn’t look like a crisis now—I have a book deal, I’m happy—but I try to pay respect to how scary it was because it wasn’t easy, that stuff never is.

BP: Speaking of moments, one of your characters has had hers, a long time ago—Mrs. Neely. Could we talk about this elderly New York matron and her interactions with your Tess?

SD: She’s wonderful, right? Mrs. Neely is modeled on a customer I used to wait on at USC who was very dear to my heart. When Tess moves to NYC she has this vision of a woman and her apartment; Mrs. Neely might have had her own version of that glamor, but she’s one of those rare creatures that has gone past her moment and survived, survived New York. She’s a woman, alone and in her eighties, and this city is for the very young—but it’s also a city that has been a safe haven for independent women for a long time. You can have a very full life here and not necessarily subscribe to man, marriage, offspring. I miss the Mrs. Neelys now that I’m no longer in New York, the kind of independent, artistic women who have not followed a prescribed path. Mrs. Neely shows Tess what is possible. 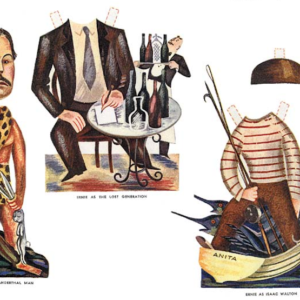