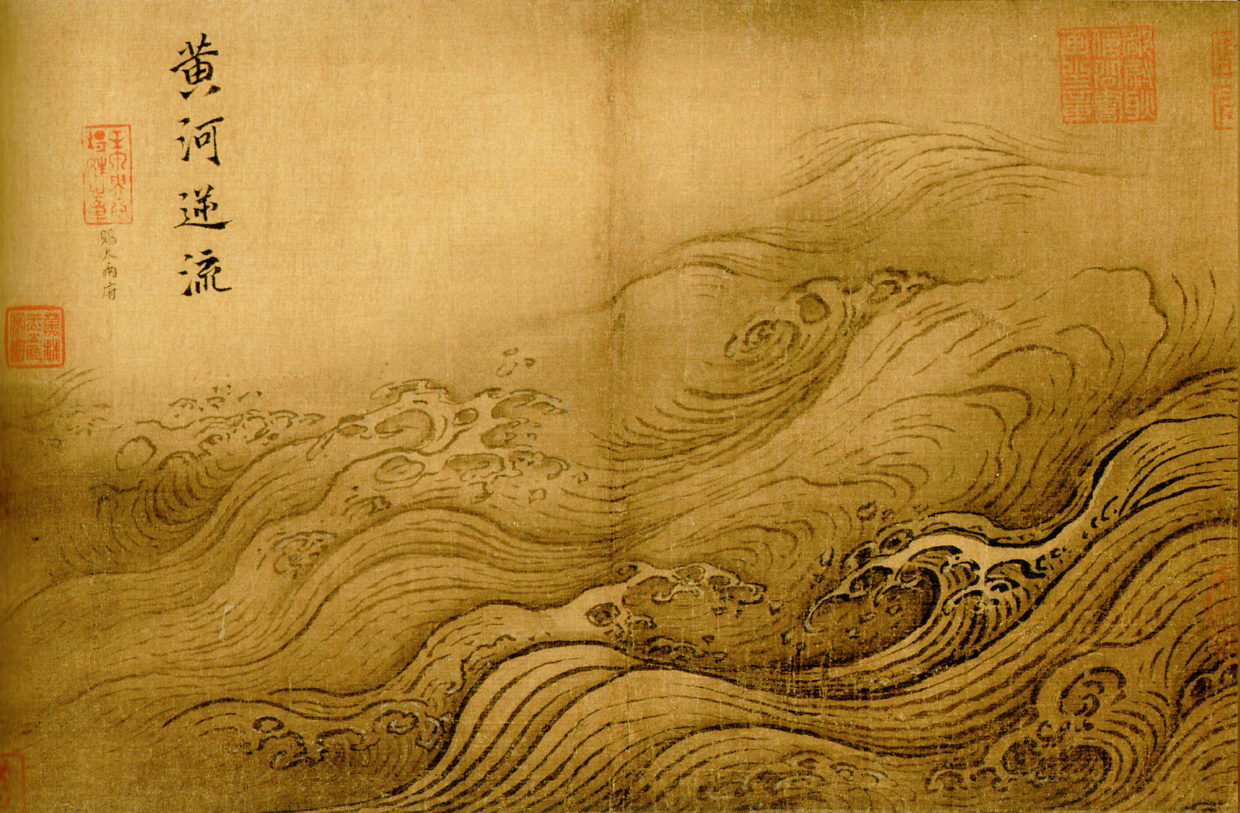 Shifting Narratives, Oral Histories, and the Tricky Nature of the Facts

“Destructive in their spread are the waters of the inundation. In their vast extent they embrace the hills and overtop the great heights, threatening the heavens with their floods.”
–Book of Documents, Canon of Yao

Such familiar stories, these out-of-disaster-comes-rebirth legends. In China the most famous of them is “Great Yu Controls the Waters.” Emperor Yu of the Xia Dynasty built irrigation channels and dredged riverbeds instead of trying to stop up the water behind dams the way his predecessors had done. He sacrificed his body for the project, accumulating calluses as he toiled alongside the common laborers. He left his family for years to see the task accomplished, and ultimately separated water from land, pulled order from chaos. He began a political system that would endure for thousands of years. His story appears in multiple texts: the Book of Documents, the Bamboo Annals, Records of the Grand Historian. There’s just one problem: the texts were written hundreds of years after Yu was believed to have existed. There’s no evidence from Yu’s era (about 2000 BC) that he existed, or that such a great flood occurred. For years, scholars have viewed Yu and his irrigation system as they’ve viewed Noah and his ark: a myth to build an empire (or religion) upon.

Then, this August, archaeologists and geologists revealed they’d found evidence of a great flood along the Yellow River in China. The flood happened some 4,000 years ago, on the river that Yu tamed, during the period he’s supposed to have tamed it. Suddenly scholars are considering a new interpretation of an old story. Yu might not be a myth at all.

This discovery was announced four months after my first nonfiction book was published, and one week after I learned that a second book had been published on the exact same topic as mine. It wasn’t a crisis for me as an author; the crisis had come years earlier. But news of the flood combined with learning about the other book got me wondering. Who controls the narrative of an event after it’s happened?

I first learned about the other author two months before finishing grad school. I was halfway finished with a book proposal about a group of men who traveled from Montreal to the Gulf of Mexico (3,300 miles) in handmade canoes and 17th-century period clothing. It was my largest project before graduation. Of all the problems that can arise during the reporting process—uncooperative sources, misinformation, lack of information, threats of lawsuits—none felt as insurmountable as this. Learning there was a man who planned to write the exact same book I wanted to write—who was already well underway—was devastating. Even worse, he was actually there for the event we both wanted to write about. He saw it happening and I didn’t, because it took place more than a decade before I was born. Yes, memory is fallible, but he wrote about the expedition at the time as a young reporter. He had first-hand experience, while I had only reconstruction. He had visceral feelings from being there; I had second-hand emotions gleaned from the expedition’s participants. I would never be on equal footing with the other author.

There’s a turn of phrase people like to use for revelations or obstacles like this: they “cast doubt” over a previously clear course. It makes adversity sound so delicate. Like holding up a parasol during a sunny picnic to cast a weak shadow. News of the other author wasn’t a parasol. This guy cast doubt on my project the way a world-ending meteor casts shade over the planet its about to destroy. Was I being overly dramatic? Yes. But I’d survived a year that had been personally and academically grueling, and this book proposal was going to rescue me by securing a book deal. The possibility of someone beating me to it felt like the universe shaking its finger at me and saying, “You didn’t really think you could be a writer, did you?” I was tempted to quit the project then and there, but it was a major component for my final grade and there was no way I’d be able to come up with another book idea before the end of the year. Besides, I’d worked so hard. I didn’t want to relinquish what I thought of as “my story.”

It occurred to me later that perhaps the other author felt the same way about me, since he undoubtedly knew about my plans to write a book. Or maybe he was unconcerned. I was only a student at that point, after all.

I tried to forget the other author. I finished grad school, edited my proposal, found an agent who helped me edit some more, and then, miraculously, a publisher bought the book. I did more interviews and visited more archives and very occasionally I googled the other author’s name. I could never find anything about him—not articles he’d written, not news about his book. This was disconcerting as well as reassuring. I wondered if he was one of those journalists who never made the transition to digital. Maybe all his stories were on microfiche somewhere, or in the stacks of a library. I told myself it didn’t matter; my book was going to be published as long as I finished writing it. But I still wondered—what if his book comes out at the same time as mine? What will people think about two versions of the same event?

The story of the scientists on the Yellow River fascinates me not only because they’ve offered physical evidence for what was previously a legend, but also for how they’re doing it. With tests and evidence and hypotheses. With samples of earth that came from the flood, that were deposited far from where it began thanks to the violent waters. Their sources, in other words, were there for the event.

During the press conference the scientists said things like “radiocarbon dating” and “reconstructed” and “direct evidence” and “legitimization of the political center.” Scholars and scientists use a different vocabulary than journalists, but they’re telling stories all the same. They’re reanimating a vanished world, relying on observable patterns to guide them. The story they’ve created is dramatic, but sparsely populated. An earthquake caused a landslide that created a dam 800 feet above the modern river’s level. Six to nine months of water from the Yellow River gathered ominously behind that accidental earthen dam in the Jishi Gorge. Then came a raging torrent, one of the world’s largest floods in the past 10,000 years. Its effects were felt as far as 1,250 miles downstream. The event happened 4,000 years ago, when the ancient documents say Emperor Yu controlled the floods.

But the geologists and archaeologists still don’t know if this was the flood Yu tamed, or if Yu was real. Scholars of Chinese history say those stories are legends meant to legitimize state rule. The flood was certainly real, and the earthquake that caused it. We have evidence for those things now. So, too, were the people killed by both natural disasters, but we don’t know much about them. How many people were there, and what size were the towns they lived in? All we have are the bones of three children found in Lajia, a village along the Yellow River. The children were crushed and preserved in rubble, killed by an earthquake but their bodies kept safe from the flood. Radiocarbon dating of their remains gave scientists the date for the flood of mythical proportions. Their bodies offer concrete evidence, but there’s nothing they can share directly, of their own volition. Were they family or friends? Did they care for each other, or only spend time together for safety or convenience? Did they go outside each morning and marvel at the sunlight glinting off the river? The rocks and bones can’t tell us. The knowledge they offer is such a limited fragment. But at least they were there for the event.

The Bamboo Annals and the Book of Documents were written centuries after the flood. The books’ authors weren’t concerned with the lives of all people—only the lives of the most powerful. They had stories they wanted to tell for various reasons: to educate, to preserve history, to set down morals and obligations. But they told their stories of Yu from a great temporal distance. Like me, they looked at the past and interpreted.

Scientists test and excavate their way to certain truths. They’re rigorous. They try to acknowledge their biases and aim for replication. Yes, there’s interpretation, but when geologists study the Earth’s past, they look at physical evidence, unmediated by secondary sources. Does that mean the narratives they produce are the ones we must believe? Or are they only the latest iteration of a story whose end we haven’t reached? Like the asymptote in geometry, those narratives are a line approaching a curve of truth that it will never, ever be able to touch.

I’ve read chunks of the other author’s book. It’s structured differently than mine, without the history of the French explorer La Salle who inspired this 20th-century expedition. In some ways, his feels more like oral history. I wanted to explore themes like “human vs. nature” and “seeking the past” and “what is history for?” He seems to have wanted to dig into the nitty-gritty, the trials of every day life in canoes. We both write about the minutiae of the expedition, the hunger and discomfort and the scratchiness of wool and canvas clothing. But we seem to do it with different goals.

“You can tell one book was written by a woman and the other by a man,” one of the expedition’s members told me after reading both books. “One is artistic and full of narratives and is tactful. The other is harsh and dramatic. You can even see it in the titles. The Last Voyageurs and Hard Rivers.”

How had we both written about the same journey, using the same sources (though I lacked the benefit of firsthand experience), and produced such different narratives? And whose narrative would be held up as the truth? Ernest Hemingway greatly admired George Orwell’s Homage to Catalonia, but everyone reads For Whom the Bell Tolls when it comes to stories about the Spanish Civil War. And Hemingway’s book was fiction while Orwell’s was reportage. The geologic evidence for a great flood on the Yellow River was only recently discovered; true or not, the story of the Great Yu has been around for millennia.

I work as a journalist, so of course I think the truth matters. But I also know how hard it is to pin down “truth,” even with all our data crunching and hypothesis-testing and scientific standards. Objectivity is impossible; lived human experience is subjective. Storytellers—be they writers, journalists, scientists, or scholars—can convey the facts, but it’s ultimately up to the audience to decide which package is most enticing. River sediments deposited by a flood 4,000 years ago, or Yu’s tireless toiling alongside the commoners? A novel or a memoir? A man’s harsh story, or a woman’s artistic one?

There’s no final answer, of course. There will always be multiple versions of the same story. But I take comfort in knowing the world is big enough for both mine and the other author’s.

Lorraine Boissoneault is an Ohio native who currently lives in Chicago. She writers about science, history, and adventure for publications like The Atlantic, Chicago Magazine, Salon, Mental_Floss, JSTOR Daily, and Nautilus. The Last Voyageurs is her first nonfiction book. 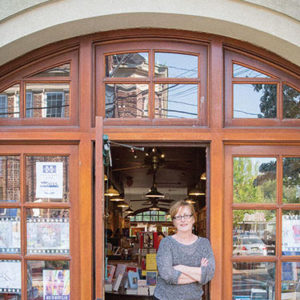 At its peak, the New Jersey township of Montclair had seven bookstores. As I sat in its second-oldest bookshop, Watchung...
© LitHub
Back to top