One Decade, Two Writers, Many Actors, and Finally My Book Became a Movie

There’s an old joke about selling your book to Hollywood. It goes something like: you give them your heart and soul, one of your literary children, and they tear it to shreds, crush the heart and soul out of it, defile it, and basically render the original work unrecognizable to the author. And what do they give you? A fortune. Or at least the promise of a fortune.

When Hollywood came calling for me, it was a trans-Atlantic conference call. On the far end of the line was director Simon West calling from London; his producing partner, Jib Polhemus, was somewhere in the hills of Hollywood; with my book-to-film agent chiming in from Beverly Hills. Simon and Jib had been interested in optioning my novel Salty and were ready to “pull the trigger.” They believed the story of a depressed heavy metal rock star trying to rescue his wife from kidnappers could translate well to the big screen.

Simon is a successful action director, but he also possess a great sense of humor—one of those dry and witty English sensibilities that might be tempted to make Jason Statham do a funny walk while he’s kicking ass. But Simon realizes that comic invention might not be appropriate for high-octane action films and that Hollywood studios had pigeonholed him as an “action guy.” He wanted to make Salty without a committee of studio executives telling him how to make it not funny. To do that, he needed to make it as a low-budget independent production. As a writer, I know that “indie film” means “independent of payment for your services,” and Simon freely admitted that he didn’t have money to pay for the rights to the book or for me to adapt the screenplay. So he asked, “What do you need to make this happen?”

I thought about it for a moment and replied, “I want a piñata filled with gold coins.  Preferably Spanish doubloons, but I will accept Krugerrand. ”

My agent chimed in. “And a silver bat.”

“To whack the piñata with.”

The next morning a messenger arrived at my house and handed me a magnum of Patrón tequila.

I have adapted a few literary properties in my career—a TC Boyle short story, a Brazilian play, an unpublished novel—and it can be tricky. Fiction is often long, complex, and much of the important action takes place inside the character’s heads, while screenplays are short, direct, and the action is on the screen. Richness and nuance are often sacrificed for exposition or, as studio executives like to say, “help our audience understand what’s happening here.” With apologies to any vegetarian readers: it’s a bit like trying to turn a cow into a hot dog, some parts will be left out, others ground until they’re unrecognizable.  The goal is to make it easy to consume.

I remembered something I’d heard David Lean say about adapting E.M. Forster’s A Passage to India where he claimed that he’d simply read the book and used a highlighter to mark the sections that would be good in a movie. Which isn’t a bad approach. It is less traumatic to adapt other writers; you can be clinical, refer to it as “source material” and swing your machete with gusto. But authors adapting their own works often struggle against the constraints of the screenplay; they want to preserve certain parts, favorite characters, a few really good bits of dialogue. In other words, it’s hard to cut something you might’ve developed a sentimental attachment to.

In Salty the story unfolds from four or five different points of view, but for the script I focused on only one, the main protagonist in the novel, the hapless rock star. It was, after all, the part that we would need a movie star for. I collapsed scenes, cut subplots, and combined characters, and tried everything I could think of to jam a 300-page novel into 120-pages of double-spaced screenplay.

And then I had an epiphany. Unlike a screenplay, which needs a director and production team to be realized, a book is its own thing. I’d already told this story the way I wanted to, my version existed, and it was in bookstores and libraries. The movie could be a different thing. Instead of forcing the narrative to be something it wasn’t, I could play with what I’d already written and make something new.

In an interview in Entertainment Weekly, Gillian Flynn talks about the same impulse when she adapted her novel Gone Girl, “There was something thrilling about taking this piece of work that I’d spent about two years painstakingly putting together with all its 8 million Lego pieces and take a hammer to it and bash it apart and reassemble it into a movie.”

Of course it’s not all unicorns and kittens, adaptations don’t often end well, Stephen King famously described Stanley Kubrick’s adaptation of The Shining as “like a big, beautiful Cadillac with no engine inside it” and Anne Rice felt the film adaptation of Interview with a Vampire “mutilated” her novel. There’s a reason people say, I liked the book better.

The first few drafts of my screenplay, revised with notes from Simon and Jib, came together quickly and then the producers went off to do whatever it is producers do. Time passed. Financiers read the script. Some expressed interest. One movie star wanted the protagonist to be the singer or lead guitarist. Being a bass player, he thought, was not star material. Which was the point of it, actually. Occasionally it looked like the movie was moving forward only for the star or the money or some other intangible to drop out. The script was not, as they say, an easy sell. Although the hero does wear tights, he has no super powers beyond playing an electric bass, drinking mass quantities of beer, and having sustained sexual intercourse.

I made a margarita with the last of the Patrón and didn’t think about the movie for a few years.

When Simon heard a radio comedy written by Toby Davies—a comedy writer on the excellent BBC series: That Mitchell and Webb Look—he thought that maybe the screenplay could use a little “freshening.” Simon asked if I was okay with this, which was really considerate of him, and I’ll admit I had to wrestle with the idea; I am not an egoless meditator living in Tibet and I had put a lot of effort into the adaptation. But film is, oxymoronically, a collaborative art form and a director’s medium.

Typically writers don’t like to be re-written. And they really don’t like it when the revisions are good. And yet there was something about Toby’s approach and his sense of humor that blended well with the spirit of the novel. The characters were the characters, the story was the story, and yet Toby gave it a tighter shape and added comedic touches and a bolt of absurdist zing that I thought were fantastic. He cut one of my favorite characters. He cut the sex scenes. He made the script better. I can admit that.

We had some of the budget, we had a foreign sales company hawking the project at Cannes and other film markets, but to make a movie, even a low budget independent movie, you needed a movie star. This delicate dance between agents, managers, and producers lasted almost two years before Jib emailed me and said: “Simon wants to know how you feel about Antonio Banderas.”

Banderas got it. He knew the character needed to be a bass player. He understood what it’s like to be rich, pampered, and inept. He didn’t mind looking like a beer-goggled nitwit. That’s another part of adapting a book, no matter what you write, the actors are going to bring their ideas about the character, and their energy to the film. It’s the same with the wardrobe, art department, editor and cinematographer; everyone brings something. The director acts as the ultimate arbiter of all these ideas, picking the best ones and folding them into the film; another layer of adaptation.

Then there are things that happen that you can’t foresee, world events or hurricanes that no screenplay adapter can adapt to. Riots in Bangkok meant that Thailand was a bit of a security issue, so the production switched to Chile. Days before we were to begin filming, Brexit happened, the pound sterling lost 17 percent of its value overnight, which meant a hole was blown through the budget that the producers had to scramble to repair. If you wonder why a movie about a band called Metal Assassin isn’t packed with songs by AC/DC or Motörhead, you can blame the British electorate.

After ten years of being a project called Salty, the US distributor decided to rename the finished film, Gun Shy. Please see: hot dog metaphor above. And despite Banderas’s character never touching a gun in the film, he’s holding one on the poster. The marketing of a film becomes yet another kind of adaptation. This one out of the writer or director’s hands.

That an independent film gets made is a small miracle, that it gets made the way the producers and directors and writers initially intended, a slightly larger miracle. I’m happy to say that the end result was worth all the effort. The story in the novel is the same as the story in the movie and yet the film is its own thing. Maybe it’s the difference between a book, which is a singular expression of ideas and emotions, and a film, which is forged by a collective enthusiasm, random events, and a director’s vision.

Mark Haskell Smith is the author of six novels with one-word titles including Moist, Salty, and Blown; as well as the non-fiction books Heart of Dankness: Underground Botanists, Outlaw Farmers, and the Race for the Cannabis Cup and Naked at Lunch: A Reluctant Nudist’s Adventures in the Clothing-Optional World. His work has appeared in the Los Angeles Times, the Los Angeles Review of Books, Salon, Vulture, Alta, and Literary Hub. He is an associate professor in the MFA program for Writing and Writing for the Performing Arts at the University of California Riverside, Palm Desert Graduate Center.

Scenes from an Emergency Clinic in the Sonoran Desert 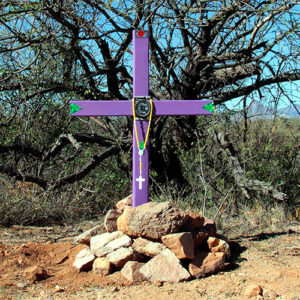 Scenes from an Emergency Clinic in the Sonoran Desert

There are three shrines in a mountain saddle in the Altar Valley. The saddle looks like a half-moon, as if someone from above...
© LitHub
Back to top