Via University of California Press

From Perón to Trump, the Political Art of Spinning Lies Into Myth

Fascism and populism both appeal to the political trinity, leader, nation, and people, as their main source of legitimation. In both formations, there is no contradiction between the people, the nation, and the representation of the people in the persona of the leader. These ideologies believe in personification as representation, which means, in effect, that achieving the will of the people is fully delegated to the leader. This three-part myth of representation rests on the fantasy that somehow a single leader is the same as a nation and its people—an identification of one person and two concepts.

In fascism, however, this personification did not require any rational or procedural mediation, such as electoral representation. In contrast, in populism, elections are important in confirming the truth of the divine supremacy of the leader, and spreading lies about them is a crucial part of maintaining the leader’s idea of his place in history.

By winning plebiscitary elections the populist leader confirms the dual nature of his power; he is at the same time an elected representative and a quasi-transcendental conductor of people. As Perón often said, “The people should know . . . that the conductor is born. He is not made, not by decree nor by elections.” He added, “It is essential that the conductor finds his own molds, to later fill them with a content that will be in direct relation, according to his efficiency, with the sacred oil of Samuel that the conductor has received from God.”

The idea of eternal incarnation led in fascism, and leads in populism, to the proclamation of the leader’s infallibility, even to the extent that the selection of the leader represents the last opportunity for the nation. This sense of emergency and imminent danger to the nation and the people is a result of the leader’s projection of friend-enemy positions and military strategies onto the intentions of his opponents. As then-candidate Trump claimed, referring to the upcoming presidential election of 2016, “For them [his enemies] it’s a war, and for them nothing at all is out of bounds. This is a struggle for the survival of our nation, believe me. And this will be our last chance to save it on November 8th—remember that.”

Revising the history of fascism renders it mythical rather than historical, suggesting that the fascism of the past was not that bad—or not even fascism at all.

Trump told his followers that his election marked “our independence day.” Perón similarly identified his own election in 1946 with a second “independence,” maintaining, “God put me on earth for the independence and the freedom of the Argentine people.” He also identified his leadership with a long history of military conquerors who were, like him, conductors of the people: “The history of the world, through the examples of Alexander, Julius Caesar, Frederick or Napoleon, shows that victory belongs to those that know to lift and conduct the people.”

If when modern populism gained power after 1945 it reformulated fascism in a democratic key, the new populists of the contemporary Right are getting closer to the fascist dream of the destruction of history and its replacement with the myth of the infallible leader. Early populist leaders had a certain hesitation about radically changing the historical record, as the fascists had done. This has changed with the right-wing populists of this new century. They are reverse engineering their own history, especially with respect to the history of fascism itself.

The distortion of fascist history in general, and Nazi history in particular, has been a fundamental feature of the new populist brand. Israeli Prime Minister Benjamin Netanyahu, at times allied with racist and xenophobic parties in Israel and abroad, has also distorted Holocaust history to suit his political interests, most recently by suggesting that an interwar pro-Nazi Palestinian leader was a key actor in the extermination of European Jews.

According to Netanyahu, in 1941 Adolf Hitler asked the mufti’s advice: “What should I do with them?” The mufti replied, “Burn them.” There is no evidence that this dialogue ever took place. Similarly, the American caudillo Donald Trump denounced his enemies for supposedly adopting Gestapo tactics but also attacked “anti-fa” and claimed that even among neo-Nazis there were “good people.”

Why do populist leaders want to forgive, distort, or displace the actual history of Nazism and fascism? Because, as these leaders draw from the well of fascist ideology, rhetoric, and tactics, they have to neuter the history of fascism to normalize their politics. Revising the history of fascism renders it mythical rather than historical, suggesting that the fascism of the past was not that bad—or not even fascism at all. This is, of course, a lie.

The past has become an indispensable part of what Hannah Arendt identified as the fabrication and centralization of lying.

Rewriting history is therefore central to the populist project. In Brazil, President Jair Bolsonaro is doing this not just with the Nazi past but with his own country’s history as well. For those worried about Bolsonaro’s defense of political violence and desire to expand the powers of the presidency, his push to whitewash the country’s dictatorial past was symptomatic of a larger pattern of populist lying about history—and deeply troubling. In 2019, Bolsonaro wanted to officially celebrate the 1964 coup that led to the most murderous military dictatorship in Brazil’s history. Moreover, he falsely claimed that this dictatorship had established democracy in Brazil, even arguing that it had not really been a dictatorship.

In 2018, Bolsonaro talked with Viktor Orban, the autocratic and racist populist leader of Hungary, and claimed that the Brazilian people did not know what a dictatorship is, suggesting that the military junta that ran the country from 1964 to 1985 could not be classified this way. This attempt was no different from the classic fascist lie that fascist dictatorships were true forms of democracy.

Like the historians of fascism who laid these lies to rest, historians of Brazil who have studied the authoritarian regime have shown the opposite. And according to the Brazilian Truth Commission, the Brazilian dictatorship that Bolsonaro wanted to commemorate was responsible for, among other things, 434 deaths and disappearances of its opponents, as well as the massacre of more than 8,000 native people.

Bolsonaro’s normalization, even celebration, of a deadly regime was not just limited to his take on Brazilian history. He heaped praise on several dictators, including the Chilean president Augusto Pinochet, who was arrested for numerous human rights violations, and the Paraguayan president Alfredo Stroessner, who kept the nation under martial law for almost all of his 35 years in power. By claiming these dictators were their countries’ saviors, leaders like Bolsonaro and Trump replace history with myth.

The past has become an indispensable part of what Hannah Arendt identified as the fabrication and centralization of lying. For Arendt, when followers become believers of these lies, they are unable to regard reality as such. In this context, politicians use “deliberate falsehood as a weapon against the truth.” As the historian Ruth Ben-Ghiat observed regarding Trump’s deep connection with the propaganda machines of authoritarian states in the past, “Since taking office, Trump has set up an information apparatus that presents him and his loyalists as the only arbiters of truth and that labels critics as partisan purveyors of falsity.”

In this revisionist world the most irrational, messianic, and paranoid views are falsely presented as history. 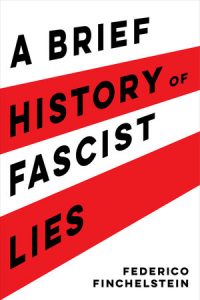 Federico Finchelstein is Professor of History at the New School for Social Research and Eugene Lang College in New York City. He is the author of several books, including From Fascism to Populism in History, Transatlantic Fascism, and The Ideological Origins of the Dirty War. His books have been translated into many languages, including Spanish, Portuguese, Turkish, and Italian. He contributes to major American, European, and Latin American media, including the New York Times, the Washington Post, the Guardian, CNN, Foreign Policy, Clarín, Corriere della Sera, Nexos, and Folha de S.Paulo.

Out of This Disaster, New Approaches to Art May Emerge 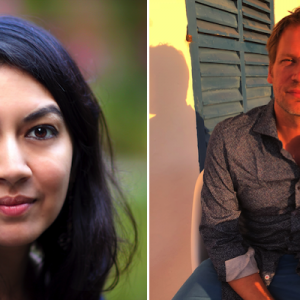 In this episode, poet and editor John Freeman talks to Fiction/Non/Fiction podcast co-hosts V.V. Ganeshananthan and Whitney...
© LitHub
Back to top
Loading Comments...