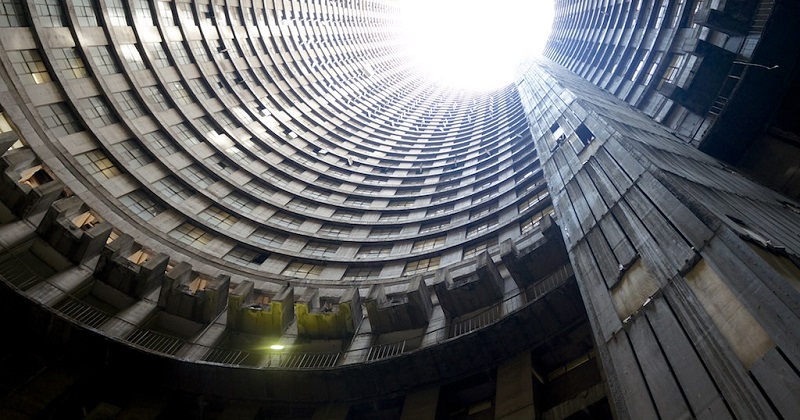 Katharine Kilalea Wonders About the Temptations We Fail to Resist

There is an essay called Mimicry and Legendary Psychasthenia by Roger Caillois which explores the idea of camouflage. Why does a creature transform itself into its surroundings? Does the urge come from within (does a stick insect want to be a branch) or from without (does the branch issue the invitation)?

I think about this temptation by space, as Caillois calls it, in relation to an apartment building in the center of Johannesburg, where I grew up. Ponte is the tallest residential skyscraper in Africa, a circular building with a hollow core, or light well, giving the apartments dual aspects. What began as a luxurious address had, by the time I was growing up, been taken over by drug dealers and prostitutes. It was a symbol of depravation, a place so dangerous that even ambulances wouldn’t enter without army support. The idea of Ponte haunted me. It symbolized the hole in its center. That void, as the artist Mikhael Subotzky put it, occupied the city’s collective imagination. Rumors circulated about what went on inside it. The hole, we heard, had become a giant garbage bin. Its contents rose five stories high. It contained drug debris, mattress coils and dead bodies, because Ponte a popular suicide spot.

What was it about Ponte which was an invitation to die? Did its perfect circularity—too regular, too inhuman—seem deathly? Or did its height invite people to fall from it? Or did that hole, like a suction, become a receptacle for the things that weren’t wanted anymore?

Several years ago, a friend committed suicide. Nobody understood why, or rather, everyone understood it differently. Her lack of money, not having a partner, the death of her brother, these were all possibilities. Whenever I thought of it I thought of the weekend I’d spent once, in her tiny apartment which smelled of vintage clothes and aromatherapy and was so hot that the only comfortable place was in a cold bath. She’d joked, more than once, about committing sewage pipe and that coriander depresses me. Perhaps people joke about unhappiness because nobody can allow for the possibility of how unbearable things can really be.

About a year later, tests revealed that I had a zero percent chance of falling pregnant. The news came as a terrible shock, despite my not being sure that I’d wanted a baby. Every time I saw a photograph of a woman with a baby, I wished it were a photograph of me. It was as though the idea of having a baby was so hardwired into my idea of my future that being split from it called into question the idea of having a future at all. Which was unbearable, only of course it wasn’t, because I didn’t die. I did, however, become philosophical. This hole in me, the hole in which a baby could not be, invited morbid thoughts, morbid imaginings. I thought of my friend’s suicide note—I can be of no use to society—until the quotient of horror became so great that I had to think about something else. I had the kind of deep and bottomless thoughts—thoughts about the meaning of life—which nobody should have. I let my thoughts go all the way down, as if trying to get to the bottom of something, something to do with death and things associated with dying, because I was depressed, yes, but also because I felt unwanted, as if the world, in this way, had let me know that it did not entirely approve of my existence. (To which I, acquiescing, responded by not eating, working, seeing friends, exercising, etc., as if reducing myself to lifelessness. . .

Only of course, one doesn’t die from losing the will to live). “What was it about Ponte which was an invitation to die? Did its perfect circularity—too regular, too inhuman—seem deathly? Or did its height invite people to fall from it?”

Then, during that British winter several years ago when it was really snowing, I fell pregnant. The flat we were living in at the time was badly insulated and I warded off the cold by warming my feet in a bucket of hot water. I remember going to an obstetric appointment in the snow boots I’d bought the previous year for a trip to the Alps.

The obstetrician was in her late forties or early fifties, a gaunt Canadian woman whose hands were so cold—she apologized for this—that when she touched me my whole body grimaced. How are you feeling, she said and I said, Freezing and constantly nauseous. I felt worried also, but didn’t say so. She responded, as doctors do, pragmatically, advising me to Wait till it subsides, or lie on your side or that I was just picking up on ordinary feelings, feelings that are always there but you just don’t notice them. Her speech had a great sense of pause. It reminded me of Ezra Pound’s Cathay poems, where each line is distinct, a full sentence. It evoked the sparseness of the Canadian landscape, or at least the northern parts I’ve seen in the photographs my father brings back from mine visits.

On screen, the probe pushed an organ slowly to one side. I had a strange sense of dissociation from my inner self. How weird that we cannot feel our insides as we can our skin! A measurement appeared which she translated as some niggles and prescribed progesterone. I must have looked concerned. It’s not a science, she said.

As a child, I kept a notebook in which I transcribed all the horrible things anyone said to me. My mother found the notebook and was furious with me for having written down such unpleasant things. Why did I write them down? I often wonder about that. Is writing an outlet? Does writing down unpleasant things let them out?

With pregnancy, my life’s efforts shifted from letting things out ­to keeping them in. Even in the early days, when the baby seemed toxic because she made me so sick, I willed my body to hold onto her. I was aware, for the first time, of having a body with a hole in it, a hole in which things could be put. The hole frightened me because I was seeing it from outside, and because it was hard to tell from the scans, with their curious dappled walls and globby tissues—No foetus yet, just a pregnancy sac—what was the baby and what was me. I had no way of knowing, because I couldn’t see her or feel her, whether she was alive.

There was a painting in the consulting room of a renaissance-style woman reclining on a chaise. Above her were the words, It is the mind that makes the body, though a side effect of my pregnancy was an inability to write or speak properly. I could no longer call to mind the right word at the right time. I had the idea that I couldn’t articulate myself for emotional reasons. Because, all at once, I felt everything intensely—my own feelings (the few diary entries I made all start with, I feel. . .

)—but also the feelings of people around me. Every time I turned on the radio (the news was always about sick children or children dying) I had to pull over until the radio seemed so hazardous that I stopped turning it on. Even the baby seemed like a mental sensation: when she moved my stomach lurched as if something had frightened me; when I got a fright, she kicked.

I found it difficult to communicate this problem to the obstetrician because I couldn’t remember the word volatile. So, as the snow fell outside, in its peculiarly clumsy English way—not down, but from side to side—I lay on her bed and, not for the first time, cried until my hands, wiping my face, were just sloshing around. Let it all out, the obstetrician said. Then, also not for the first time, she joked that what had prepared her for obstetrics was a rotation in psychiatry. I love mad people, she said.

Katharine Kilalea grew up in South Africa and moved to London for an M.A. in Creative Writing from the University of East Anglia. She has published a poetry collection, One Eye’d Leigh, which was shortlisted for the Costa Poetry Award and longlisted for the International Dylan Thomas Prize. She lives in London. Her debut novel, OK, Mr. Field, is forthcoming from Tim Duggan Books. 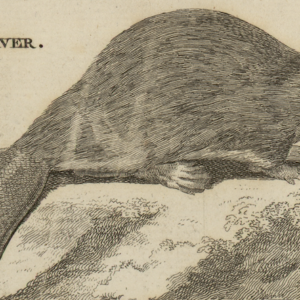 The first time I tried to meet Drew Reed, the most prolific beaver mover in the state of Wyoming, I was thwarted by a sick...
© LitHub
Back to top