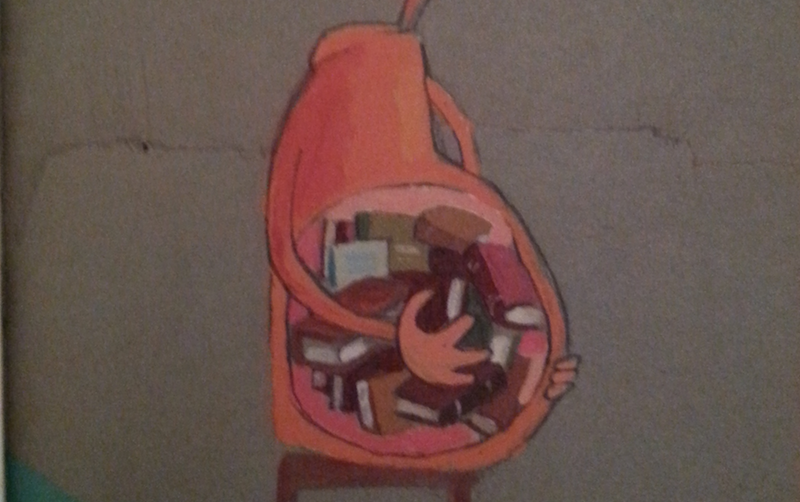 The DSM-IV was published in 1994, but I found a copy at a library book sale in 1999, the weekend John F. Kennedy Jr.’s plane crashed into the Atlantic Ocean. I was 14, and for a year I’d been in treatment for anorexia nervosa. In its earliest manifestations, my eating disorder had been all about definitions, defining my adolescent self in relation to the known entity of anorexia, to—by disappearing—fit in. Enrapt, I found my behaviors in the psychologist’s bible.

Of course the experience was largely masturbatory, a private pat on the back. I didn’t need the DSM-IV to identify symptoms for me: they were familiar—odds are, they would’ve been familiar to most American teenagers, too. What was novel, though, was thinking of anorexia in the context of mental health.

I don’t make movies or television shows. I write stories and poems and novels and essays. Because I’ve lived with some permutation of an eating disorder since 1998 (roughly as long as I’ve identified as a writer), some of my work deals with, explicitly or implicitly, the body: its hunger, its satiation, its habits, its weights, its expansion and contraction, its bones and its fat, its movement or stalling in space. Food, too, and clothes and exercise and the bodies of other women—the set dressing of the mental health issue with which I am most familiar.

Crass as it sounds, mental health is hot. May marked mental health awareness month; every week, another novel captures the unknowable conditions of a disordered mind. With each bullet fired in a mass shooting, the call for a better understanding of the mentally ill grows more resounding.

So why is there less art about eating disorders than about other mental health issues? Last year, Mark Ruffalo starred as a bipolar father in the indie darling Infinitely Polar Bear. Why are stories about bulimic mothers confined to Lifetime? Why continually ascribe eating disorders to the realm of afterschool special? What fear keeps more eating disorders from being depicted—and written—with edge and quirk?

I say fear because I think there is a fear. Once, a magazine editor responded to a story of mine by telling me that eating disorders are “overdone.” In the midst of a one-on-one conference, a poetry professor asked me why I “needed to write” about my misapprehension of my body’s dimensions. “You know you’re in good shape,” he said. “How much do you weigh?”

Where does this position (a dismissal, a denial, a distate) come from? I asked Kate Johnson, a literary agent at Wolf Literary Services, about eating disorders and the publishing industry. Johnson, who “struggled with eating disorders in various iterations for several years,” told me:

I’m both drawn to and cautious about reading/representing works on the subject, the way—maybe?—a veteran or army brat might be simultaneously curious about and wary of war stories… For all of my interest in it, I’ve never taken on a novel or memoir that deals with eating disorders head-on, though I’ve come close. It’s possible I’ve felt industry pressure to tread carefully, but more likely it’s my own personal resistance, for two reasons. For one, because eating disorder memoirs can sound wistful and nostalgic, like yearning for a bad ex-boyfriend, and because even the most painful recounting of an eating disorder can sound desirable to a disordered reader … For a second, less personal reason: to me, eating disorders fit into the larger scope of addiction memoirs, and there’s a conundrum here, which is that to honestly capture the experience of, say, anorexia or alcohol addiction, you have to capture a sort of daily tedium. Addiction—to the high/self-soothing of drugs or to the high/self-soothing of restraint or purging or extreme exercise—is kind of boring, on the surface of it. There’s a lot of fascinating thought behind the procedural drudgery, and to capture both at once takes some pretty exceptional writing (think David Foster Wallace writing about a tax office in The Pale King…). But then, can you explore the fascinating elements without glorifying the disordered thinking?

Johnson has “less shame about [her past with eating disorders]”; she’s enthusiastic about some “fantastic books recently that … whether as essay or autofiction, look at bodies and anguish in an intellectual and, I think, productive way.” This is progress—I agree. In Sarah Gerard’s Binary Star, anorexia’s pulse nearly beats off the page; in Ottessa Moshfegh’s Eileen, rumination and purging disorder drive numerous scenes; in You Too Can Have A Body Like Mine, Alexandra Kleeman, according to Slate, “captures the beatific zeal of the orthorexic.” Roxane Gay’s essay “My Body Is Wildly Undisciplined And I Deny Myself Nearly Everything I Desire” interrogates our obsession with reality-TV weight loss competitions like The Biggest Loser—and our IRL obsession with “so many rules for the body—often unspoken and ever shifting.”

But there’s room for more. In her essay “Grand Unified Theory of Female Pain,” Leslie Jamison writes, “It’s news if a woman feels terrible about herself in the world—anywhere, anytime, ever.” I agree with her, but I wonder: isn’t news when anyone feels terrible?

I talked to poet Nina Puro about their experiences writing about eating disorders. “I process the world somatically because how my body felt in space and the amount of space it took up was most of what I (and everyone around me) thought about, and my emotions were directly tied into what I had consumed,” they told me. “My perception—and, thus, my poems—is marked by this somatic processing. Everything I write contains something of my history, as is true of anything anyone writes—it comes from the body that lived that history.”

Puro’s history with an eating disorder informs their poetry. “The experience informs the shape the poems take on the page—vacillation between compression (of the body—into neatness, comprehension, legibility) and alternately excess (outpouring, a sort of TMI maximalism pagebarf)… hesitation and repetition. I’ve been thinking a lot about flinching, stuttering, tantrums, convulsions—involuntary reactions of aversion. An eating disorder is akin to a very long flinch.”

Like many people whose eating disorders began in adolescence, I read everything I could about them. As a kid, I was a picky bookworm: when I received an abridged copy of Jane Eyre as a gift, I made a stink and promptly returned the plasticky hardcover. To read about anorexia I compromised my standards.

I read The Best Little Girl in the World and its sequel Kessa and Stick Figure: A Diary of My Former Self. I read Goodbye, Paper Doll once and still remember the protagonist’s name is Rosemary. Second Star to the Right. The Passion of Alice. Sweet Valley High #74: The Perfect Girl. Sometimes I found offerings for adults: My Sister’s Bones by Cathi Hanauer and Eve’s Apple by Jonathan Rosen, the memoirs of Pat Boone’s daughter and ballerina Gelsey Kirkland and a writer named Aimee Liu. And, again and again, I read Wasted: A Memoir of Anorexia and Bulimia Marya Hornbacher’s memoir.

Even when the DSM-IV entered my world, none of these books offered me what I could have used—depictions of how to manage an eating disorder, models of what life with something other than recovery might look like. In a recent article on YA author John Corey Whaley, Bustle Books Editor, Cristina Arreola writes about Whaley’s latest novel, Highly Illogical Behavior. In that book, protagonist Solomon Reed is a 16-year-old agoraphobe. “Yes, he’s agoraphobic,” writes Arreola, “but he and his parents have developed a precise system of life hacks that keep him happy, healthy, and relatively sane.” In other words, “[he] doesn’t really need to be fixed.”

I guess I’m wondering why depictions of eating disorders demand fixing. I agree with Leslie Jamison when she writes in her essay “Grand Unified Theory of Female Pain,” “suffering is interesting but so is getting better,” but I also believe getting better is relative. And maybe misrepresenting recovery’s prevalence or power is irresponsible. As Puro told me: “I… feel a visceral resistance to packaging my experience or trauma in a “safe” comprehensible way.”

In a recent interview with Kristen Martin here at Lit Hub, Leslie Jamison spoke about her next project, The Recovering, which analyzes addiction and recovery narratives: “…I want to honor what narrative can do by not making a false promise that it always does everything or saves everything,” Jamison said. “I think about it as a complicated homage to what recovery can be and the role that narrative can play in recovery.”

In my own experience, recovery—whatever piece of it I could swallow—leads to writing. There’s the simple matter of time. Starving, purging, whatever: an eating disorder subtracts hours from the day. Of course (and maybe this is why total recovery and not an abstention from behaviors is the aim of treatment), there’s also the issue of headspace. Living with an eating disorder is like being one of the “high media multitaskers” who fare so poorly in Verena von Pfetten’s recent article on monotasking.

I asked Binary Star author Sarah Gerard about her relationship with her eating disorder. “[It] isn’t at the forefront of my mind,” she told me.

It’s not something I think about all the time while I’m writing, or that I can give a lot of time to thinking about. I try not to think about it much these days, and my mind is deep in other things. I’m really enjoying this freedom. It might just be that I’m at a stage in my recovery where I need to distance myself a bit from the mode of thinking I had while I was sick. I feel that I’ve reached a place where I understand it and can choose not to inhabit it.

We need writers like Gerard, who can both show us what inhabiting an eating disorder looks like and also attest that said disorder does not need to be inhabited. We need Gay and Moshfegh and Kleeman and Jamison, poets like Nina Puro and Cynthia Cruz and Louise Glück, Marni Ludwig and Michelle Chan Brown. We need The Skinny and its star Jessie Kahnweiler, who told Cosmo: “Bulimia is something I am going to have forever.” We need that the polyphony of experiences—is that awareness?—every day, every week, every month. We need to include eating disorders in the larger conversation about mental health lest they continue to remain—to the greater public—dismissible, peculiarities of girlhood.

JoAnna Novak is author of the novel I Must Have You and two books of poetry: Noirmania and Abeyance, North America. Her work has appeared in The Paris Review, The New York Times, The Atlantic, Conjunctions, AGNI, BOMB, and many other publications. She is cofounder of the literary journal and chapbook publisher Tammy. 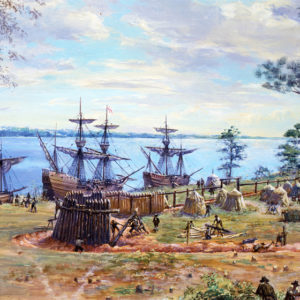 We know what class is. Or think we do: economic stratification created by wealth and privilege. The problem is that...
© LitHub
Back to top