Turns Out It Was *Actually* a Fear of Empowered Women

By Margaret Marsh and Wanda Ronner

The United States suffers from an epidemic of infertility, in-vitro fertilization (IVF) expert Martin Quigley told Time magazine in 1984. According to the magazine, the rate of infertility in the United States had tripled over the past 20 years, and the childbearing potential of American women was in jeopardy. “Doctors place much of the blame” for the “epidemic,” wrote reporter Otto Friedrich, on “liberalized sexual attitudes,” resulting in an increase in pelvic inflammatory disease, delayed childbearing, and the stress of a career.

Newsweek delivered the “traumatic news” in 1986, claiming that “dire statistics confirmed” a finding that “everybody suspected all along”: high-achieving, educated women who were “still single at 30” had only a 20 percent chance of finding a husband. And if they were unable to find one by the time they turned 40, they were almost surely doomed to permanent spinsterhood. In the article’s most famous line, single women over 40 were “more likely to be killed by a terrorist” than to marry, with “a minuscule 2.6 percent probability of tying the knot.”

These alarming assertions became baked into the culture of the 1980s. Neither was true. The Newsweek story was so egregiously false that the magazine took the rare step 20 years later of retracting the entire article. But both of these claims struck a familiar chord, warning young women that if they chose to make their work a priority they would never find a husband, or if they did manage to marry, the stress from their careers would make them infertile.

After a decade of legal, professional, and educational gains for women, the forces of reaction were setting in. What better way to undermine those gains than to tell young women that their ambitions would lead to a lonely and sterile middle age? But as wrong on the facts as they were, the articles and books and the reams of commentary they generated struck a powerful emotional chord in the 1980s. This was a decade of deeply contested ideas about gender roles and sexuality. The fears evoked by these claims helped frame the public’s response to the new reproductive technologies, shaping the particular—and uniquely American—ways in which these technologies emerged, expanded, and were received during the decade.

Four interacting forces drove this process. The first was a new wave of pronatalism acting in concert with a simmering backlash against feminism. Societal pressure to procreate merged with a call for women to scale back their professional ambitions to focus on their families. The second was a significant increase in demand for infertility treatment, arising in part from the widespread publicity that accompanied the first IVF babies born in various regions of the country. It would have been almost impossible for any newspaper reader to miss these stories, which not only highlighted the successes of the new technology but also showed readers where to find treatment if they were having difficulty conceiving.

By 1980, stories celebrating the pleasures of a life without children . . . had virtually disappeared from the nation’s magazines and newspapers.

Third, the first two developments were undergirded by the rise of conservatism during the two terms of Ronald Reagan’s presidency. And finally, there was widespread media coverage of both the lack of regulation and the high cost of the new reproductive technologies. Democrats, who controlled the House of Representatives but not the Senate, came to believe that these new ways of making babies should be regulated at the national level.

Because government was divided, with Republicans controlling the Senate and the White House, Democrats sought ways to find common ground. That proved difficult. A total of five congressional hearings were held. Four of them failed utterly. The fifth did indeed result in legislation, but only because it reframed the legislative issues from regulation to consumer protection.

By 1980, stories celebrating the pleasures of a life without children, so prevalent in the prior decade, had virtually disappeared from the nation’s magazines and newspapers. Marriage and parenthood were back in fashion in the media and in real life, and the children of the baby boom who were now in their mid- to late twenties were marrying and starting families. They were joined by their slightly older counterparts who, having waited even longer to settle down, were now tying the knot and decorating their nurseries.

Many of these women expected to have careers—or at least jobs—as well as families. Practically speaking, a comfortable middle-class standard of living still often required a two-earner household; although the high inflation rates of the late 1970s and early 1980s had begun to ease, wages remained stagnant. Furthermore, women who had gone to college and perhaps to graduate, medical, or law school in the 1970s and early 1980s, when the feminist movement was at its peak, expected to have professional careers, just like men.

But by the mid-1980s, after a decade or so of gains for women under the law, progress ground to a halt. Anti-feminism, masquerading as postfeminism or even as a new version of feminism, promoted the message that women’s empowerment could be displayed by staying at home and being supported by a man. Studies showed that by the end of the 1980s, men had become “less likely than women to support equal roles for the sexes in business and government, less likely to support the Equal Rights Amendment—and more likely to say they preferred the ‘traditional family’ where the wife stayed home.”

This backlash—the word became the title of journalist Susan Faludi’s book on the subject—set back the movement for gender equality and cleverly co-opted the language of women’s rights to promote an anti-feminist agenda. Career-minded women were told that if they focused too much on their professional lives, they’d likely never marry, and if they did marry and continued to work in high-powered jobs, the stress they would inevitably experience could make them infertile. Even some of those who were willing to pay that price believed that the premise was true. “Infertility,” writer Susan Lang proclaimed, incorrectly, “was the unexpected fallout of the women’s revolution.”

The medical profession itself was not immune to these attitudes. In 1982, the New England Journal of Medicine published a study of pregnancies after donor insemination, which concluded that fertility in women began to decline at 30, not at 35 as previously believed. The fact that the study found only a “slight decline” in fertility between 30 and 35 did not stop Alan DeCherney and his colleague Gertrud Berkowitz from advising young women in an accompanying editorial not to postpone childbearing to satisfy their professional ambitions.

Consider having your children in your twenties, they wrote, and wait to start your career until your thirties. Those at whom the advice was directed pushed back. Why, Harvard Medical School students Edith Brickman and John Beckworth responded, should women hold off on their professional dreams if they wanted to have children? A combination of “universal day care and equal parenting by father and mother” would be a much more appropriate way to address such a problem than the one proposed by DeCherney and Berkowitz. “Scientific facts,” these students concluded, “in themselves do not lead to social conclusions.”

Women who were in their twenties and thirties in the 1980s . . . were primed to believe that reproductive decisions were under their control.

This editorial and the response to it also reflected a more general assumption within the medical profession that infertility rates were rising. In fact, the opposite was true. Infertility rates declined again, although only slightly, during the 1980s, from 8.5 percent in 1982 to 7.9 percent in 1988. And although the perception was that educated women had the highest risk for infertility, in reality the women most likely to suffer from the condition were African American women and women of all races of lower socioeconomic backgrounds.

In 1982, when the infertility rate in white women was 8.1 percent, it was 13.1 percent in African American women. And among whites, infertility rates were lower for college educated women than those with less education. These data did not fit the dominant narrative, however, and the facts did little to change impressions. It was difficult to persuade physicians that infertility had declined in the 1980s, because greater numbers of women were seeking treatment. But there were more women in doctors’ offices not because infertility rates were rising, but because the baby boom generation was larger than the generation before it by about 21 million people, and because this generation was more likely to seek medical treatment when they failed to conceive.

Women who were in their twenties and thirties in the 1980s, having grown up in the era of the birth control pill, were primed to believe that reproductive decisions were under their control. Not only could they prevent unintentional conception, but if they used the Pill they were also accustomed to regular visits to a physician, because oral contraceptives were available by prescription only. Surely, with the Pill making it possible for them to choose not to get pregnant, they believed, when they stopped taking it, they would conceive. And if they failed to get pregnant on schedule, shouldn’t there be a solution to that problem as well?

Since many women already went to the doctor for contraception, at least they knew where to turn for diagnosis and treatment. The attention given to the first waves of what the press and the public invariably called “test-tube” babies in local newspapers and on television shows across the country put the issue of infertility in the news on a regular basis, making the idea of medical help for an infertility problem seem almost a given.

Many of the stories also provided information on where to find that help. And if such advice was not readily at hand, would-be parents could turn to RESOLVE, which had become a national organization by the end of the 1980s. Over the course of the decade, gynecologists and reproductive endocrinologists were seeing greater numbers of infertility patients; it was only natural for them to think that this increase in their patient population meant that infertility was on the rise. 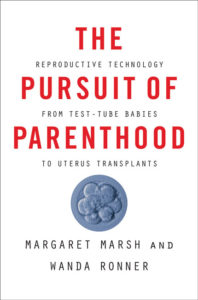 Excerpted from The Pursuit of Parenthood. Used with permission of the publisher Johns Hopkins University Press. Copyright © 2019 by Margaret Marsh and Wanda Ronner.

Margaret Marsh is a university professor of history at Rutgers University.

Wanda Ronner is a professor of clinical obstetrics and gynecology at the Perelman School of Medicine of the University of Pennsylvania. They are the authors of The Empty Cradle: Infertility in America from Colonial Times to the Present and The Fertility Doctor: John Rock and the Reproductive Revolution. 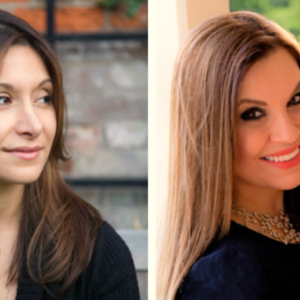 In this episode of the Fiction/Non/Fiction podcast, Iranian-American novelists and memoirists Jasmin Darznik and Dina Nayeri...
© LitHub
Back to top
Loading Comments...