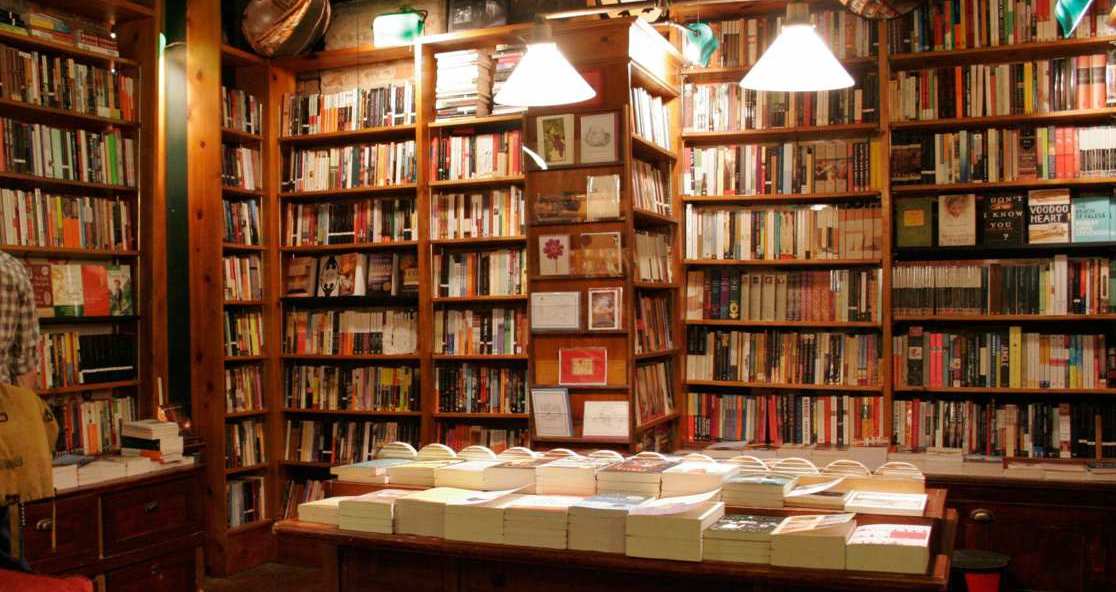 On the Experience of Entering a Bookstore in Your Forties (vs. Your Twenties)

Steve Edwards on the Meaning of Books as You Grow Older

In my twenties the question was never “What do I want to read?” but rather “Who do I want to be?”—and bookstores were shrines I pilgrimaged to for answers. I didn’t have much money and had to be intentional in my selections. I’d pull a book from the shelf and study its cover, smell its pages, wander into the weather of its first lines and imagine the storms to come—imagine a wiser, wilder me for having been swept away by them. It’s something I still feel in my forties. I’m still dazzled by possibilities when I walk into a bookstore.

But it’s not the same.

Now when I wander the aisles, it’s not just some future self I imagine but a past one. There aren’t just books to read but books I’ve already read. Lives I’ve lived. Hopes abandoned. Dreams deferred. The bookstore is still a shrine but more and more what I find aren’t answers to questions but my own unwritten histories.

I’d started coming to bookstores because I wanted to learn how to write and the only consistent advice I got from established writers was to read everything. It was good advice. It’s still good advice. It’s also impossible. No one reads everything, nor even all the books they’d like to. You make your choices, come what may. John Muir’s famous quote about ecology might as well have been about choosing what books to buy: “When we try to pick out anything by itself, we find it hitched to everything else in the Universe.” The bookstore is a liminal space. Even if like me you don’t have the cash to buy a box of new titles and reinvent yourself week to week, you have the moment of the choosing and everything it tugs upon.

I’d started coming to bookstores because I wanted to learn how to write and the only consistent advice I got from established writers was to read everything.

As a young writer, I thought I had to read widely in order to learn different authors’ styles and sentence structures and voices. I thought I needed a sense of what sang and what sold, what had been done and done to death. But what I needed more than anything were the consequences of my choices. I needed to live the lives the books I read compelled me to lead—to be brave, big-hearted, open to surprise and welcoming of mystery. Until I had lived, my study of sentences was nothing more than a corkboard of pin-stuck insects arranged by genus and species. I could gain knowledge from such cold classifications but it wasn’t the same as standing in some open mountain meadow, flowers teeming with wings, crickets under every rock. What I needed was the quality of attention the writers I loved brought to the page, their fidelity to translating perception into sequences of language that edified me for losing (and finding) myself in them. If I wanted to understand crickets, I had to become like the grasses in the meadow soaking up every call.

Entering a bookstore now, at 44, with the benefit of hindsight, the choices I made as a young writer seem almost inevitable. My early love of Thoreau and nature writing and solitude led me to John Muir, Rachel Carson, Mary Austin, Loren Eiseley. Then I found Edward Abbey, Wendell Berry, Barry Lopez, Annie Dillard, Linda Hogan. I read Alice Walker’s In Search of our Mother’s Gardens. Leslie Marmon Silko’s Ceremony.

I wanted to know what they knew and make a practice of looking at the world—critically and creatively—through the lens of place.

In my own writing, I began to see my little hometown in Indiana as though for the first time. The cornfields weren’t just cornfields—they were manifestations of agricultural colonialism built upon stolen land, drained swamps, and leveled forests. The nitrogen used to fertilize them ran off with hard rains, spilling from feeder creeks like the Wildcat, which ran behind my house, and into the Wabash, the Ohio, and ultimately the Mississippi, before finally reaching the Gulf of Mexico where instead of corn it fertilized giant blooms of toxic algae and created a hypoxic dead-zone the size of New Jersey. As a kid, I’d waded those creeks and streams with my dad, fishing, watching dragonflies skim the surface. As a teenager, I’d spent six summers wading the cornfields, pulling tassels stalk by stalk for minimum wage. How strange that it took reading about Walden Pond to set me on the path toward understanding my own home.

And how strange to think about where writing to understand my own home took me. On the strength of an unpublished novella about my years as a corn detasseler, I won a writing contest whose prize was seven months as the caretaker of a backcountry homestead along the Rogue River in Oregon. In the span of a few years, I’d gone from reading about Thoreau’s experiment in self-sufficiency to living one of my own. As luck would have it, the story of that half-year became my first published book, and the book helped me land a teaching job in Massachusetts.

Now I live a dozen miles from Walden Pond. In the “local authors” section of the bookstore I frequent Henry David’s guileless, lamb-chopped mug peers out from cover after cover, reminding me of where I am—and who I am. Other books do the same. They’re not merely items on a shelf but points on a map, convergences I can trace to former versions of myself. Last week my nine-year-old son and I wandered into an aisle given over to coffee table books with stunning photographs of the natural world. One was about rivers and I opened it and turned to a picture of the Rogue River. I showed him. I said, “This is where Daddy lived a long time ago—in Oregon—before you were born. Isn’t it beautiful?” But to him it was just another picture of a scenic river. He took a quick glance and said it was pretty cool and drifted off in search of his own possibilities.

The little sting of his indifference I could handle. It was the picture of the Rogue that floored me. There waiting in an inconspicuous bookstore in Concord, Massachusetts, in a glossy oversized coffee table book, was a glassy-green piece of my heart, a glimpse of a life I couldn’t get back. And other shelves harbored similar pangs. You can only read To the Lighthouse for the first time once before you’ll always know they never made it there. Eventually Holden Caufield becomes less an arbiter of truth and more just another sad, mean kid. The years you dedicated to Faulkner? Gone. You thought you might take up baking bread with a little help from the Tassajara Bread Book? Now you’ve got kids, bills, the stress of a job.

All the people you could have been had you chosen differently—they haunt the bookstore alongside the person you became and could still become. If you want that bread badly enough, you’ll find a way. But it comes at a price. You might have to give up ever reading Ulysses. Or the Teddy Roosevelt biography you’re eying. Or about the shamans of Peru, or regional wines, or Darwin’s voyages on the HMS Beagle.

All the people you could have been had you chosen differently—they haunt the bookstore alongside the person you became and could still become.

Choosing is always a sweet sorrow. I don’t mean to lament that fact only to point out that, as with rivers, you never step into the same bookstore twice. And while I remain dazzled by the promise and possibility bookstores offer, I’ve found myself becoming somewhat apprehensive of them. Who needs the reminder of all you never were? Or of all you were but won’t ever be again? At 44 I feel a pressure that wasn’t there in my twenties. As my father so eloquently reminded me last year when I mentioned I’d been shoveling snow: “Be careful, Bud: You’re in the heart-attack zone.” How many books do I have left to read?

In terms of problems, of course, deciding what to read is a good one to have. We all know the world is on fire, in some instances quite literally, and the luxury of having more books to choose from than at any point in human history isn’t something to complain about. But I’m sentimental. How could I not be curious about the implications of an activity that has touched every part of my life? I’m reminded of Rachel Carson’s writing about tides and what causes them: “In theory,” she says, “there is a gravitational attraction between every drop of seawater and even the outermost star of the universe.” Is there anything that isn’t worthy of our consideration? Taken together, what is the pull of our collective engagement with books? What trouble do we face that isn’t somehow mediated by them? When I read a children’s book about Jane Goodall to my son at bedtime, what is it I’m really doing? When the tiger is shot and killed at the end of Kate DiCamillo’s The Tiger Rising, and my son cries real tears for an animal made solely of words, what is it I’ve done? Books don’t just tell us a story—they become us. Who do we want to be? How much say do we have in that? The holy power to which the bookstore is a shrine frightens me.

But I’ll tell you who doesn’t seem bothered. I see them in the aisles in their cardigans and too-big sunglasses, tote bags slung over their shoulders. They scan titles and pull books from the shelf and study dust-jackets in deep concentration: older folks in their fifties, sixties, seventies, and beyond. People with far more stories than my meager few. Lifelong readers. Book addicts. I watch them sometimes and wonder what drives their choices. How does reading evolve? Are books to us as leaves are to trees, feeding us while we hold them, then decomposing and feeding us again after we’ve let them go? I’m heartened by my elders. Humbled. I wonder if instead of asking “Who do I want to be?” they ask themselves, “What do I want to read?”

Toward an Expanded Canon of Black Literature 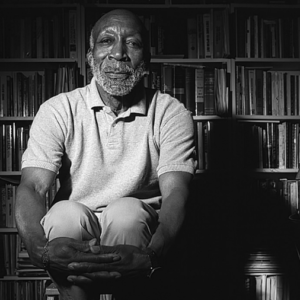