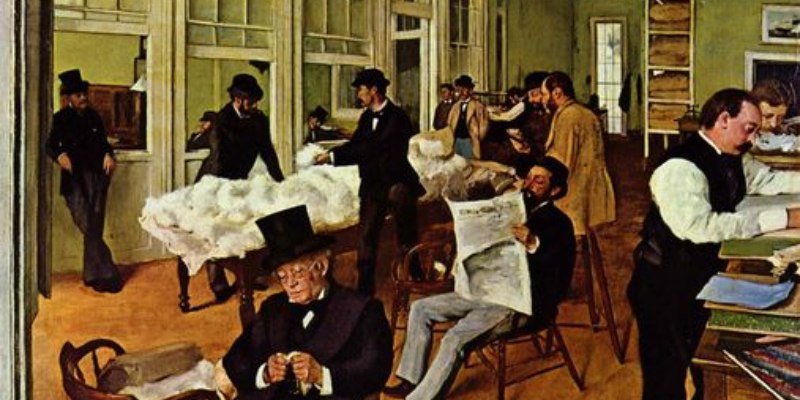 Most people think of Edgar Degas as a French painter of ballerinas. But few have heard that his mother came from New Orleans or that he spent five months in that city between October 1872 and February 1873. That five-month period proved crucial to Degas’s career, moving him from the status of a relative unknown dabbling in the not-quite-respectable world of the Paris Opera into an artist of renown. And although he went back to painting ballerinas—many of his most famous works date from 1873 and later—it was his study of his brothers, A Cotton Office in New Orleans, that won him the critical acclaim that pushed him into the next stage of his career.

In Estelle (She Writes Press, 2020), Linda Stewart Henley takes this vital transition as her starting point for a dual-time story in which a young woman named Anne Gautier, twenty-two years old and fresh out of college, inherits an old house on Esplanade Avenue in New Orleans in 1970. While overseeing renovations and dealing with protestors opposed to urban renewal that displaces the poor, Anne discovers an old journal that sheds light on Degas, his friends and family and sojourn in the city—in a house just down the street from hers. Her attempts to uncover more information reveal mysteries both personal and artistic, and soon Anne must tackle some very basic questions regarding what she wants from life.

Interspersed with Anne’s story is the narrative of Degas’s sister-in-law, the Estelle of the title, as she welcomes her visiting brother-in-law and observes his adjustment to family life. Estelle has troubles of her own: she’s pregnant with her third child, she’s losing her eyesight, and her marriage suffers as the family cotton business struggles to stay afloat in the aftermath of the US Civil War. Yet she perseveres, and these relatively quiet domestic scenes contrast well with Anne’s more dramatic conflicts and with the occasional diary entries reproduced from the journal Anne has discovered. The end result is a thoroughly enjoyable tale of the changing fortunes of a great city and the life of an artist, told through the perspectives of three women governed by expectations that are in some ways quite similar, although the options available to them are not similar at all.

C. P. Lesley: How did you find out about this period in Degas’s life? What made you want to tell his story?

Linda Stewart Henley: It was serendipity, because I was thinking of a location where I might want to set a story, and I bought a guidebook of New Orleans. I had gone to college there, so I knew the city, but I didn’t know that Degas had lived there for five months in 1872 and 1873. That was in the guidebook. I began to research that and decided it would be something to write about. That’s how it started.

C. P. Lesley: And before we get into the specifics, what made you decide to craft the novel as a dual-time story? What does the contemporary perspective add?

Linda Stewart Henley: Many people don’t know that Degas lived in New Orleans for those five months, and not much has been written about it. So when I looked at all the information—the facts we have—I realized it wasn’t very much of a story. I thought it would be more interesting if I created a more contemporary thread that could add more drama to the book—a protagonist in the 20th century who wanted to find out more about Degas, because she knew he was a neighbor of her ancestors who lived on the same street. I also wanted to create a bit of a contrast between women’s lives in the 19th and 20th centuries, in New Orleans.

C. P. Lesley: The older part of the story begins with Edgar Degas’s arrival in Louisiana in October 1872. Where are Estelle and her husband—René, who is Edgar’s brother—at this point in their lives?

Linda Stewart Henley: René married Estelle rather quickly; he followed her back to New Orleans and decided he wanted to work in her father’s cotton business. Her father needs help, because he has only daughters, and daughters in those days didn’t work in offices. So René married Estelle, and at the point when the story starts, they’ve been married for three years and have two children, with one more on the way.

C. P. Lesley: Critics at the time considered A Cotton Office in New Orleans, in modern parlance, Degas’s breakout work. Do you have a sense of what makes this painting of his brothers such a landmark in his career?

Linda Stewart Henley: It’s hard to understand it now, but in 1872, America was viewed by Europe as a kind of enigma. The French in particular admired American business, the kind of entrepreneurship that was possible there, and many French people came to New Orleans because they thought they could make their fortune there, in this country they equated with enormous opportunity. So when people saw this painting, it answered some of their questions. They saw it as an example of American industry, American business.

Interestingly, it didn’t have the same appeal in England. When Degas painted it, he expected to sell it to a dealer in England because so much cotton was exported from New Orleans to England, where they had many textile mills supplied by US cotton. But when the cotton ceased to come after the Civil War, that whole industry declined, and people in England were no longer interested in a depiction of a cotton office. When he exhibited the painting in France, it generated a lot of interest. Eventually he sold it to a museum located near the Pyrenees—the first painting he ever sold to a museum.

Linda Stewart Henley is an English-born American who moved to the United States at sixteen. She is a graduate of Newcomb College of Tulane University in New Orleans. She currently lives with her husband in Anacortes, Washington. This is her first novel. 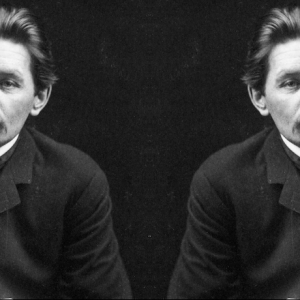 “I want to try to think about Cy Twombly through the poems of Catullus. These two spirits seem to me somehow in tune.”...
© LitHub
Back to top