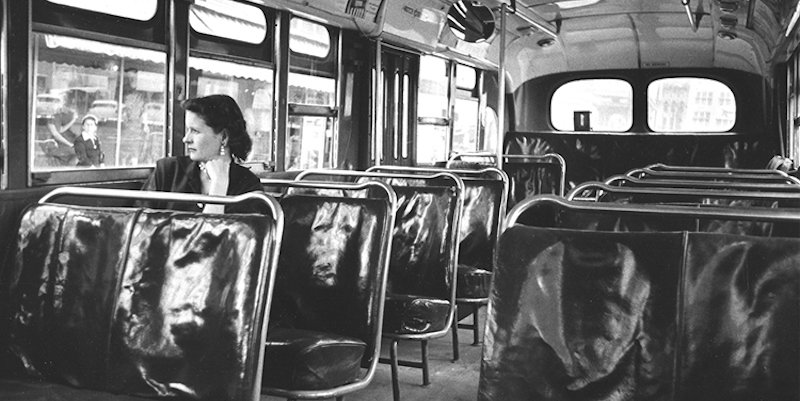 On the Courage of the Earliest Civil Rights Bus Protesters

Carrie Lee Fitzgerald was sick with worry when she boarded the Trailways bus in Lynchburg headed to her home on the rural outskirts of Danville, Virginia, in January 1944. She had just visited her husband of forty-two years at the hospital for “coloreds,” where he was being treated for kidney disease. She left fearing it might be the last time she saw him alive. And, indeed, he would die just a few weeks later. Perhaps her grief and state of mind explain her unexpected actions that day. Or perhaps it was the blatant contradiction between her treatment and the fact that at that very moment one of her three sons was serving with the American invasion army in Europe, while the husband of her youngest daughter—the one who accompanied her that day—was in the Pacific fighting on yet another front to “save the world for democracy.” Or perhaps it was simply the accumulated insults over the course of her 66 years in a state that systematically demeaned and disrespected Black life.

Whatever the cause, to her daughter’s horror, she took a seat in the front of the bus—the section reserved for “whites.” The driver noticed; he barked an order that she move to the back. Her reply cracked like a whip through the suddenly quiet bus, a tone all too familiar to her family and friends. She refused. Refused in no uncertain terms. The “cullid” seats, she pointed out, had been taken by the overflow of white college students who had filled the bus before she got on, so she was taking the first one freed by a departing passenger. Perhaps the driver found the prospect of wrestling an old lady out of her seat distasteful and the delay of waiting for the police inconvenient; in any event he decided to leave well enough alone, Virginia law and custom be damned. Thus Carrie rode the rest of the 60 miles to Danville undisturbed. Years later, family lore would celebrate her rebellion as “a Rosa Parks moment,” an unsung rehearsal for the iconic beginning of the Civil Rights Movement ten years later.

Contrary to family lore, however, what is most notable about Carrie’s rebellion is how representative it was of that moment in the history of Black life in America, for there were certainly many similar rebellions, before and after. Indeed, just six months later, 27-year-old Irene Morgan, an employee of a defense contractor building fighter aircraft, would make a similar protest when she boarded a Greyhound bus at the Hayes Store stop near Gloucester, Virginia, for her trip home to Baltimore, Maryland.

Unlike Carrie Fitzgerald, Irene Morgan was arrested, and her case subsequently attracted the attention of the nation and the legal team of the National Association for the Advancement of Colored People (NAACP), leading to a landmark decision three years later in which the US Supreme Court declared that because hers was a journey across state borders, the discrimination she suffered was an unconstitutional violation of her civil rights. Morgan’s challenge to Virginia’s Jim Crow laws may well have reflected her coming of age in a border state and the wartime activism of Black Americans there, but each of these facts also reflects the changed environment across the nation for Black aspirations for equal treatment and respect. 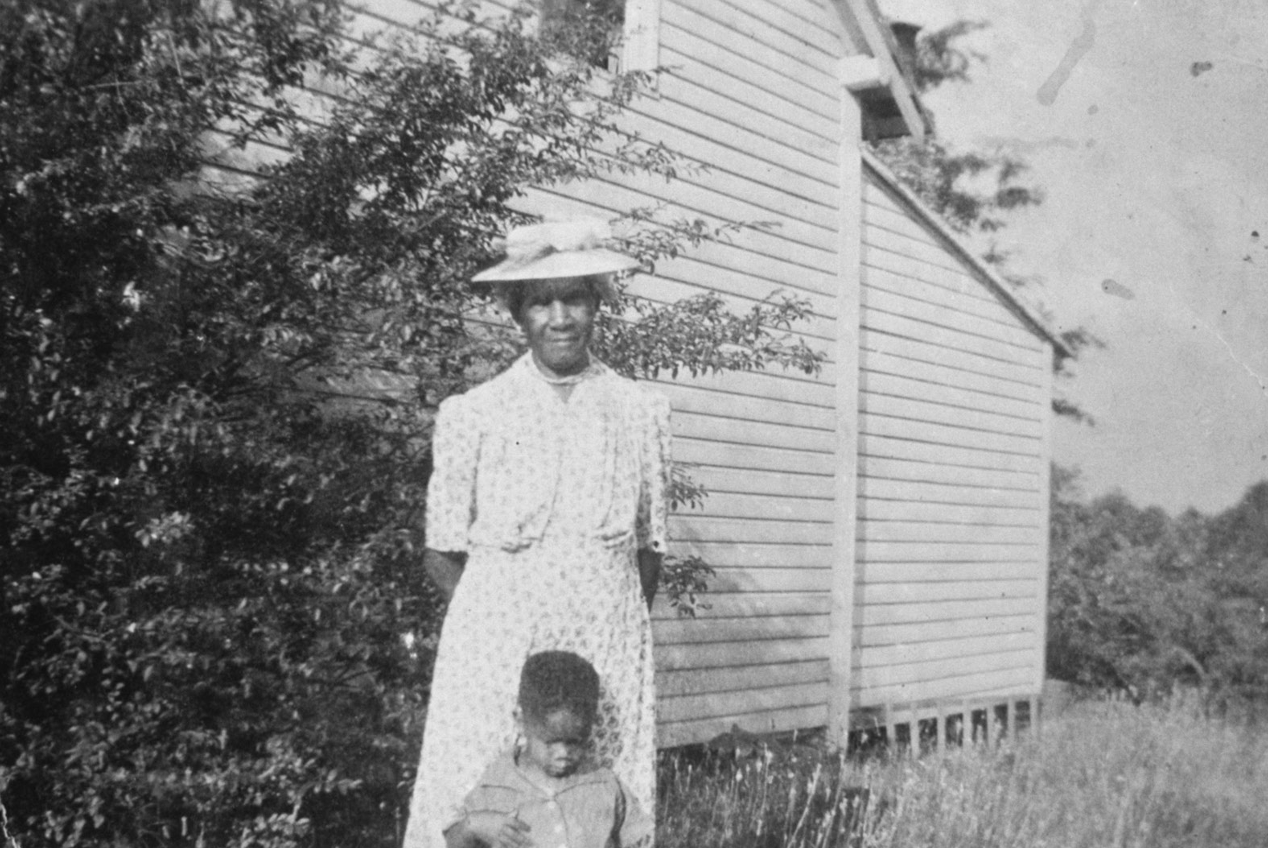 The life of Carrie Fitzgerald, shown here with the author several months after challenging Virginia’s segregation laws, bridged the struggles and aspirations of the generation born after the first Reconstruction and that of her grandchildren, who forged the second. Photo courtesy of Katherine Holt Jewett.

Fitzgerald’s world in 1944 was very different from Morgan’s, but it was also unlike the one she had been born into in 1878, just a year after the dreams of a democratically reconstructed South died in bloody violence and political betrayal. Not only did the war against Nazism offer promise of reviving that dream, but so had the material circumstances that made Carrie’s resistance possible. Having left agricultural labor behind a decade earlier, her family was no longer dependent on the whims of a plantation boss for either subsistence or shelter. The dependents’ allowance the army paid to her youngest daughter had enabled the purchase of the two-story log cabin that the family had previously rented. So there would be no landlord demanding an explanation for her actions on the bus that day. Nor was there anyone to threaten the jobs of her grown children, for by then those not in military service were employed in the southern or northern urban labor markets that had expanded to satisfy wartime demand, setting a pattern that would consolidate the massive demographic transformation that reshaped Black life by the second half of the twentieth century.

The challenges to the Jim Crow order between 1955 and 1965 were clearly rooted in the generations of resistance that came before, and they cannot be understood without that prior history, but one must be clear that Carrie Fitzgerald’s rebellion was not yet part of a mass social movement.

Thus does Carrie Fitzgerald’s story—arguably more than Irene Morgan’s—reflect the crucial changes of the decades preceding the advent of the Civil Rights Movement. Nonetheless, like many similar events, recorded or lost to history, Carrie’s individual and momentary challenge to the South’s Jim Crow regime should not be conflated with later events as simply an early episode in what some have called “the long civil rights movement.” Rather it must be seen as at best a prelude to that movement, one emblematic of the ongoing historical transformations that made a broader rebellion possible ten years later. The challenges to the Jim Crow order between 1955 and 1965 were clearly rooted in the generations of resistance that came before, and they cannot be understood without that prior history, but one must be clear that Carrie Fitzgerald’s rebellion was not yet part of a mass social movement.

In contrast to protests a decade later, there would be no community mobilization to build on her individual protest, nor much immediate change in her own disposition toward the oppression she had briefly challenged. She would quietly return to her usual routines, minding her garden and grandchildren. What many scholars have called the “classic” Civil Rights Movement, which spanned the decade between 1955 and 1965, is best understood, then, as a unique moment in the long history of African American resistance and struggle against racist oppression, a moment that included many of the elements missing from Carrie’s story. We must recognize as well, however, that that later moment was rooted in and built on the social, economic, and geopolitical transformations that made Carrie’s actions possible and that also shaped the conditions of possibility for the coming storm. In Carrie’s story, then, we find the seeds of the larger story that would unfold for her children and grandchildren over the decades to come, all of whom would come of age in a different world than the one she had known.

Carrie’s story also exposes some of the popular misconceptions about the character of, and the social forces driving, the movement that came later. The Civil Rights Movement has become a well narrated era of recent American history. Its images re-broadcast every January and February in tandem with celebrations of Martin Luther King Jr.’s birthday and Black History Month have far too often been reduced to select soundbites of King’s eloquence. Even when supplemented with the image of Rosa Parks’s iconic sit-in on that Montgomery bus, the Movement is most often represented as the individual or collective acts of heroic and charismatic male leaders. Much like Carrie’s lone act of rebellion, however, a deeper examination of the Movement reveals a resistance less driven by heroic male leaders showing the way than simply the accumulated grievances of ordinary citizens—most often women like Carrie Fitzgerald, Irene Morgan, and Rosa Parks—newly conscious of the means and possibility to act. Understanding both the limitations and the achievements of the Civil Rights Movement, therefore, requires that we recover the features, the historical conjuncture, that made it truly a social movement—collective, sustained, and world-changing.

The most active participants in the social movement that gripped the country for roughly a decade during the mid-twentieth century were very cognizant of its distinctive qualities: collective action, sustained commitment, and the determination to achieve fundamental changes in the social order and in the power relations that sustained it. Those activists summarized that engagement in two words, “The Movement.” Occurring in different places, under different organizational auspices, with sometimes different specific objectives, its singular character—signaled textually by the definite article and the capital letters—was that ordinary people were moving in unison to achieve what they hoped would be revolutionary change.

Certainly, there was a touch of arrogance and demonstrable error in some of the younger activists’ assumptions that they were the very first to challenge and resist the absurdities and brutalities of America’s racial order. On that point Carrie Fitzgerald and Irene Morgan could have set them straight. Their intuitive sense that they were coming of age at a distinctive moment in the long history of that freedom struggle was correct, however. Let us hope that a better understanding of the conditions of possibility shaping that struggle will be of use to the continuing struggle for social justice and human dignity. 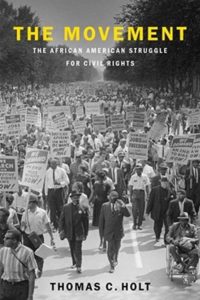 Thomas C. Holt is James Westfall Thompson Professor Emeritus of American and African American History at the University of Chicago and the author of Children of Fire: A History of African Americans and The Problem of Race in the Twenty-First Century. 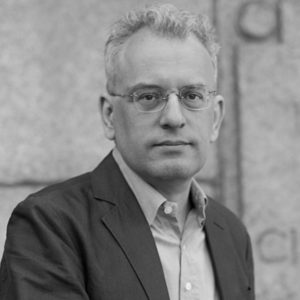 This week on The Maris Review, Christopher Bonanos joins Maris Kreizman to discuss his new book, The Encyclopedia of New York,...
© LitHub
Back to top
Loading Comments...