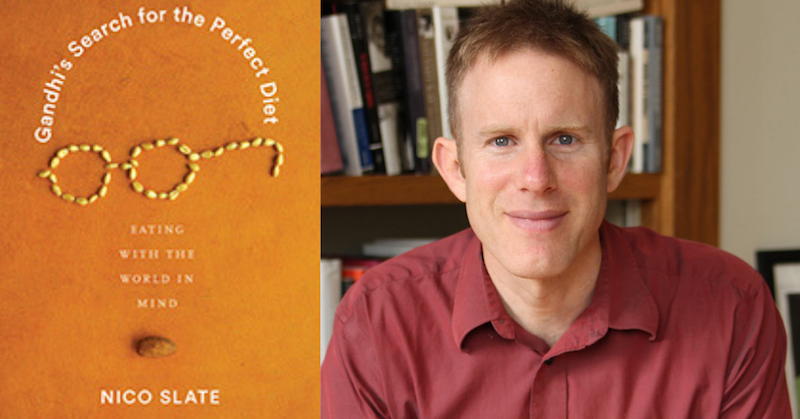 On the Connection Between Gandhi’s Diet and His Politics

This week on New Books in Food, Carrie Tippen talks with Nico Slate, professor of history at Carnegie Mellon University, about the intersections between diet, spirituality, health, and politics for one of the world’s most famous nonviolent political activists, Mahatma Gandhi. Dr. Slate, who researches anti-racist activism in the United States and India, researched Gandhi’s experiments with vegetarianism and veganism (and vegetarianism again), raw food, nut milks, fasting, and prohibitions against salt, chocolate, coffee, and flavorful foods like ginger and mangoes that might inflame the passions.

In Gandhi’s Search for the Perfect Diet: Eating with the World in Mind (University of Washington Press, 2019), Slate explores the ways that Ghandi linked his diet to nonviolent political action through protesting salt taxes, fasting for peace, and abstaining from chocolate produced by slave-like labor. But more importantly, Slate examines the moments when Gandhi’s diet turned from purposeful action to unhealthy obsession, as well as the moments when Gandhi humbly changes his diet to accept new information or welcomes cooperation with individuals and groups who cannot share his convictions. This episode brings a new perspective to a familiar figure through an investigation of the archive of diet.

Nico Slate is a professor of history and director of graduate studies at Carnegie Mellon University and founder and director of Bajaj Rural Development Lab and SocialChange101.org.

Carrie Tippen: I was struck too by how often you describe him changing his mind or developing nuance in his thinking as he gained more information. What strikes you as the most interesting of the contradictions?

Nico Slate: Mangoes are one of his great passions, but a difficult, complicated one for him. There’s a wonderful moment in the conclusion of the book, which I call “The Mango and the Mahatma,” in which I talk about these two episodes where, in one, he gets this crate of mangoes and he writes a letter to a dear friend saying, “I’m so sorry you weren’t here for me to share these wonderful mangoes with you,” and then 20 years later, he gets a crates of mangoes sent to help with patients he’s gone to take care of. He ends up eating some of them himself and curses them, says they’re a cursed fruit, because they’re so delicious. I think it’s easy to suggest possible reasons why in one case he supports mangoes and in another he doesn’t. Is it that in one case the mangoes were destined for medical patients he’s treating, or that he’s grown more austere with age?

Studying Gandhi’s diet is a wonderful way to be cautioned about believing that any one diet will solve all the problems.

But I found he maintains that tension, the tension between loving the flavor of food and seeing it as a danger. He maintains that throughout his adult life, and never fully reconciles that. I find that very appealing for me personally because I see both sides. For me, personally, there’s something very beautiful about eating a delicious meal, and I’d never want to give that up, in fact I’d say there’s something spiritually important about that kind of beauty. It pulls us out of ourselves, it broadens us and opens us up to a greater world. It can also do the opposite, drive us back into ourselves and narrow our realm of interests, particularly if we fall into a certain gluttonous hedonism. So I think that tension’s very productive.

CT: You connect Gandhi’s raw diet to today’s paleo trends. What problems or issues or questions about diet did he face that we still deal with today? What do you think he has to offer us now? Wisdom or caution?

NS: Definitely both. The caution and the wisdom often collide. For example, I think studying Gandhi’s diet is a wonderful way to be cautioned about believing that any one diet will solve all the problems. I think there’s still a very strong tendency in our world, driven in large part by money, trying to sell books and diets, to tell people aha! you’re struggling with this, that, or the other—well, come do this diet, whether it’s the paleo diet or various fasting diets. There are so many get-healthy-quick schemes out there that can lead people to be really hard on themselves, for one thing, when things don’t live up to their hopes and expectations; people often take it as a personal failure. Or it can lead to a certain extremism or absolutism. Gandhi’s both a cautionary note and also an example for us, because even though he could be quite absolute and extreme at times, taken as a whole, he’s an example of someone who really believed in evidence-based diets, and recognizing limitations and failures, owning up to them and being humble.

Let me give you another example. He had a long-standing debate with a few British nutritional scientists who worked for the empire, and here’s Gandhi writing from this radical position, both politically and nutritionally, and yet Gandhi is able to accept on more than one occasion when his views on food and vitamins are wrong. Vitamins are a fascinating thing for Gandhi because our knowledge for vitamins was just growing when he first became interested in nutrition. Early on, he believed, for example, that he could get vitamin D from various food sources, and after he was told by scientists that no, you get vitamin D from exposure to the sun, Gandhi accepts that, he embraces it and changes his opinion. 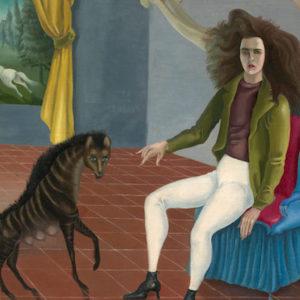 According to Screen Daily, there's a new, as-yet untitled biopic in the works about your very favorite surrealist writer...
© LitHub
Back to top