On the Cinematic Precursors of Donald Trump

David Thomson in Conversation with Andrew Keen on Keen On

On today’s episode, David Thomson, author of The New Biographical Dictionary of Film, discusses his life in film and why Trump is trying to replace reality.

Andrew Keen: A lot has been written about the cinematic or the television quality of Donald Trump. I think one of the best books was James Poniewozik’s Audience of One. He’s the TV critic. There’s a long tradition of this, of course; Neil Postman’s Amusing Ourselves to Death is an iconic book in this category. What’s your take on the—and I use these words carefully because I know they’re not the same—the cinematic or the television quality of Trump’s America, and particularly of Donald Trump himself?

David Thomson: Well, I think he is the most completely evil, deranged figure I’ve ever come across. And I think he exemplifies something that we have kind of masked from ourselves, which is the way in which the movies have taught us—this is going back decades—have taught us to love evil figures. And we love them in part because they are exercising energies we feel we can’t exercise, but also because they’re doing damage, but the damage doesn’t affect us. It doesn’t make us responsible.

I think you have to relate that to, well, two great cultural figures from the movies. I think this goes back to Michael Corleone. And I think it goes back to 007. Now, you’re supposed not to challenge 007, particularly in the aftermath of Sean Connery’s death, but I think James Bond was a cultural disaster of immense proportions in that it really taught us to admire, to imitate, and try to be a kind of thug. That strikes horror in your heart when you realize that it might have been a role model for Trump. Just as I think Michael Corleone was, just as I think once upon a time Charles Foster Kane was.

Andrew Keen: Well, let’s move to Charles Foster Kane. You wrote a wonderful book, David, about Orson Welles and Kane called Rosebud. Is the Trump narrative in many ways similar to at least the movie Citizen Kane?

David Thomson: Well, Kane is about an outsider figure who rises not quite as high as Trump has risen, but rises to the heights of American power. And he’s a monster. He behaves terribly to individuals. But he has an extraordinary on-camera charm. For all the books that have been written about Trump, I think there is one that remains to be written, which is really how he handles the camera.

Andrew Keen: You mean him on camera?

David Thomson: Absolutely. I’m not sure that he knows what he’s doing. He may, but I think it may be innate and instinctive. He is just a master of playing to the camera and playing to the audience behind the camera. And that comes from being a child of the movies. He’s a few years younger than I am, and he probably started seeing movies when he was four. I would not be surprised if he felt that mixture of delight and dread that I was telling you about earlier. I don’t think he reads at all. He has a signature that makes you aware that he can hardly write. I think he watches television. And really, it seems to me that his chief function in the White House governing, allegedly, has been staying up all hours to watch TV and to be on TV. I think the ultimate Trump situation is him watching himself.

David Thomson has taught film studies at Dartmouth College, has served on the selection committee for the New York Film Festival, and has been a regular contributor to The Guardian, The Independent, The New York Times, The Nation, Movieline, The New Republic, and Salon. His other books include “Have You Seen . . . ?”: A Personal Introduction to 1,000 Films; Showman: The Life of David O. Selznick; and three works of fiction: Suspects, Silver Light, and Warren Beatty and Desert Eyes. Thomson lives in San Francisco with his family. 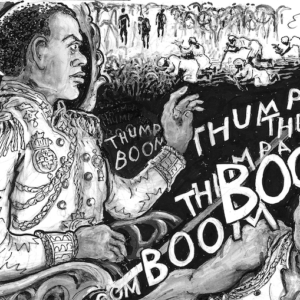