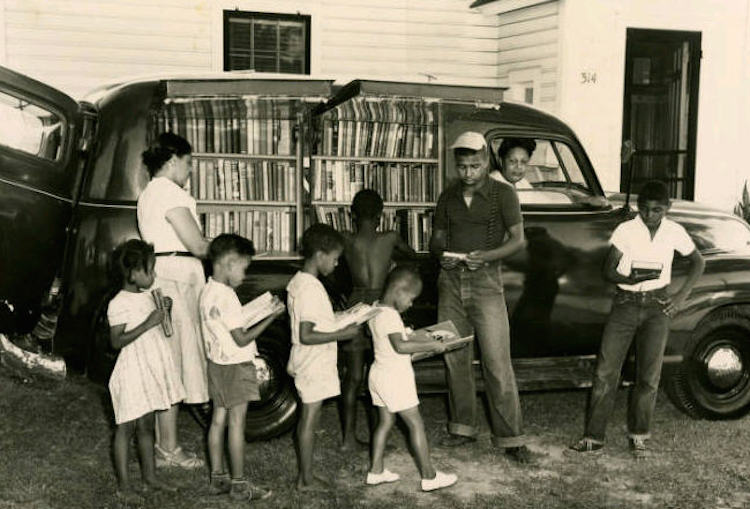 On the Battle to Desegregate the Nation’s Libraries

When the Public Library Wasn't So Public

On May 28, 1945, Violet Wallach of Locust, New Jersey, complained that black residents in her area had to enter a back door in the Navesink township library. Once they entered, black would-be readers were shuttled to a small room isolated from the main reading room for white patrons.

Wallach was not merely an observant bystander. A member of the Navesink Library Association in Monmouth County, she had made her objections known to the association. But on that day, Wallach went one better and met with an NAACP lawyer—perhaps because she was frustrated because she had not received a satisfactory response from library leadership.

The story of the Navesink library and its racial exclusion is a story told mostly in letters and bureaucratic memos.

Months before, in September 1944, Wallach had sent a letter to the chair of the library’s trustee board.

“Dear Mr. Crane: It is with great surprise that I recently learned that the Negroes, desiring to borrow books from the Navesink Library, must use a back door and a back room for this purpose. When we hear of such conditions existing in the South we are deeply shocked—and justly so—at such bigotry. That the Negroes in our vicinity are denied the front entrance and use of the front room is no less shocking.”

She found the library policy galling “especially today when the Negroes are fighting and dying on an equal basis with white men” in World War II. And Wallach’s “today” may have had special resonance; her letter was dated September 28, 1944, when the Allies were entering an intense and bloody battle to take the key northern French port city of Calais.

Wallach’s May 1945 visit aroused the interest of attorney Edward P. Dudley, the NAACP special counsel who would later become the first Black ambassador to head an overseas U.S. mission. For the NAACP’s leading minds had been keeping on their collective eye on libraries. They understood that these facilities often maintained white supremacy alongside their massive card catalogs, and that educational parity happened on varied terrains.

The realization that the public library—idealized as a democratic place of learning and sanctuary, where the life of the mind was more ostensibly important than the color of skin—was not a haven for all was not new. As scholar Karla Holloway has written in BookMarks: Reading in Black and White, Black Americans knew that they had a “vulnerable relationship” to public libraries and found ways to “contradict the value that those segregated spaces explicitly assigned.” In 1925, NAACP Secretary Walter White mounted opposition to the establishment of a library science school at the all-Black Hampton Institute, reasoning that the creation of a segregated training program would only bolster an already segregated profession or create boundaries where they were being deliberately and incrementally torn down. A decade later, the American Library Association would be on the hot seat when it held its 1936 conference in the old Confederate capital, Richmond, Virginia; Black participants were allowed, but were seated in their own section in meeting halls and were not invited to any events where meals were served.

So long before President Lyndon Johnson signed the Civil Rights Act of 1964—which included libraries as institutions where desegregation was mandated but did not name them specifically—the national NAACP and chapters had launched small campaigns that did everything from championing the cause of a Black librarian assistant’s promotion in the New York Public Library system or, in this case, investigating Violet Wallach’s allegations about her hometown library.

No sooner than Wallach had departed their meeting, attorney Dudley fired off a letter of his own to alert NAACP branches in the state.

“Mrs. Wallach is a Jew and seems very much concerned about the problem,” he wrote—a reference that acknowledged Jewish Americans’ long activism in the NAACP and the continuing unfolding horrors of the Holocaust.

He added that an estimated 300 Black people were affected and inquired whether someone nearby could look into the matter, marshal local opposition and “stop this foolishness.”

But it was not until December 1945 when a two-man team, including New Jersey civil rights attorney Ira Katchen, went to the library. They quizzed a Black young girl whom they spotted walking down the street and carrying a load of books. She guided them to the library’s back entrance and a room that measured, by the activists’ best guess, 10 feet square.

As it turned out, the Navesink library limited black patrons, mostly children, to only six hours of library access on Wednesdays. And it was a policy about which staff disagreed; one library assistant commented that the “present set-up is terrible and unfair but she asked not to be quoted.” Not so Harriet Trumaine, the library’s treasurer, who treated the men to a pointed explanation of why Black children were literally relegated to the back of the building.

Wednesdays’ short hours were enough for the children, Trumaine said, because “we don’t believe in social equality for Negroes. We don’t want our white children associating with them on the same level. The Negroes are a different race. They should be proud of it but keep to themselves.”

The Navesink campaign was largely—if the archival vestiges in the NAACP papers are any indication—social change by correspondence and veiled threats, though there are references to involving Black congregations in advocacy. If attitudes like those of Ms. Trumaine were impervious, the NAACP legal team wrote letters that wielded pragmatic big sticks: losing face, but possibly losing funding and facing a lawsuit.

By February 1946, the library’s front entrance and entire facility were still no-go zones for African-Americans. Katchen turned to New Jersey’s anti-discrimination law, hoping that state law could bolster the case.

But New Jersey and library officials feinted and bobbed-and-weaved with defenses that publicly deplored but defended the segregation.

First, the library association was a private entity, not subject to existing civil rights law.

Or the discrimination law only applied to employment situations.

Or that the segregation existed only in this library and none of area’s other public book-lenders, as an unfortunate holdover related to the preferences of the library association’s Founding Funders. As a functionary in the New Jersey Department of Education informed those challenging the segregation, “these two families imposed racial restrictions in setting up the [Navesink Library] Association and endowing it; and all trustees thenceforth have followed that pattern” since 1914.

Custom—bequeathed by someone else, of course—ruled. But even more was at stake than whether 300 black residents could browse the Navesink bookshelves with the same freedom as whites. The library building also housed a bowling facility and gymnasium, the kind of places where interracial bodies could come in uncomfortable proximity and where “social equality” could get out of hand. Tennis costumes, the sporting facilities, and the library’s main spaces would remain white.

So the jousting continued, as the NAACP searched for a legal remedy and a Black plaintiff who could sue as a citizen deprived of his or her rights.

By January 1947, the documentary trail thinned, though new names pop up. Thurgood Marshall signed off on a payment for $4 for yet another bout of travel to wrangle with the Navesink library.

Then finally, on January 27, the paper trial comes to an abrupt end with this brief note: “We have been informed that the Navesink library, pursuant to our demands, has ceased its discriminatory practice of refusing admission to Negroes into its main library room.”

The pace of racial change was slow. Library associations that tried to admit Black librarians—another front on this bookish war against discrimination—often found themselves riven by conflict among white members who favored it, those who wanted professional integration but not broader equality, and those who would fly the flag of resistance until the end, some even proposing closing libraries before “capitulating.” In Deep South Alabama, efforts to bring in black members started in the late 1940s, but were stymied until the Civil Rights Act of 1964.

Indeed, change was so slow that by the 1960s—when it was clear that de jure Jim Crow was headed toward extinction, pushed there by Black resistance and litigation—libraries were more overt battlegrounds. In the spirit of the 1939 library sit-ins in Alexandria, Virginia, Black students and citizens launched library protests in places such as Petersburg, Virginia and Wilmington, North Carolina. Others disrupted segregated voting drives that took place on library premises.

And that same year, the U.S. Commission on Civil Rights began surveying segregation in rural library systems that had received federal funds, a survey that revealed just much work there was to be done and the many forms segregation could take. “Are books at the Negro branch generally cast-offs of the white library?” it asked along with questions about the staff’s racial demographics and whether Blacks could use the bathrooms among the books. Were reference books available to both populations equally? Would African-Americans be considered for librarian posts?

Segregated libraries, many but not all in the South, had developed both obvious and subtle mechanisms to keep their spaces white. If their towns were big enough, they sometimes built separate reading rooms or black libraries, often funded by Carnegie endowment money that constructed more than a thousand “Carnegie free libraries” across the nation. Bookmobiles circulated to reach readers throughout their communities, but bookmobiles also helped to divert Black readers from browsing among the stacks. As in Navesink, some libraries offered special days and hours for black patrons.

In states such as North Carolina, the survey showed variety within the theme of exclusion. In the Appalachian mountain town of Marshall, there was no library segregation because there were so few Black people, period. In Greenville city in the eastern part of the state, white borrowers picked from 62,000 circulating volumes while African-Americans chose from 3,296. Near the South Carolina border, Rockingham County had white and Black libraries and also Black staff, the latter who performed their clerical work at the headquarters and attended meetings with white staff. “All books interchangeable,” wrote librarian William O’ Shea.

This was, one supposes, progress when Blacks and whites could share office space and books. While some libraries across North Carolina reported having janitors as their only African-American employees, O’Shea noted, “No Negro has been rejected for employment since I have been Librarian. We hired Negro teen-agers to help put main library in order after recent painting.” He added, in a penciled scrawl and without irony, the parenthetical reference that “painting in white library was done by Negro painters.”

Dr. Cynthia Greenlee is a Duke Univerity-trained historian of the African-American experience and the law. She is also the senior editor at Rewire News. A resident of North Carolina, her work has appeared in American Prospect, Dissent, EBONY.com and Rolling Stone, among other publications. She is also a member of Echoing Ida, a Black women's writing collective. Follow her on Twitter @CynthiaGreenlee

The Art of the Short Story: Helen Phillips and Matthew Vollmer 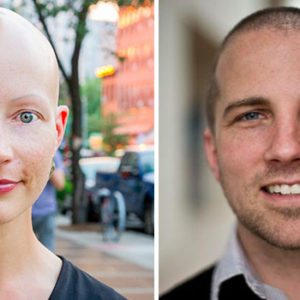 The Art of the Short Story: Helen Phillips and Matthew Vollmer

Writer Charles D’Ambrosio said of one of Matthew Vollmer’s story collections: “Virtuosic in its variations yet held...
© LitHub
Back to top