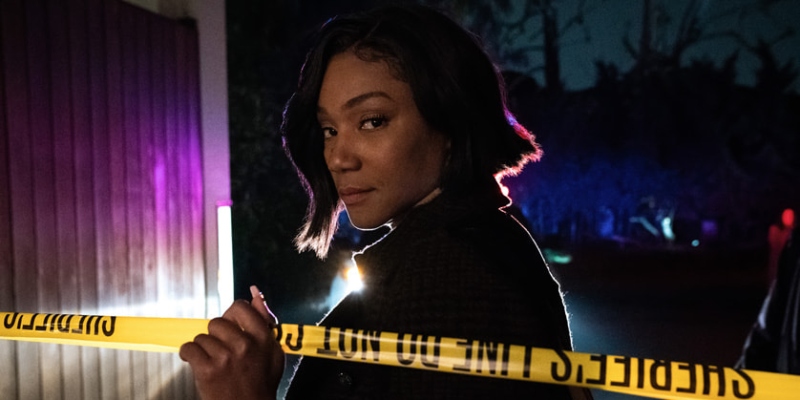 About one minute into episode one of the new Apple TV+ series The Afterparty, a young man in a purple suit (Dave Franco) plummets from the balcony of a cliffside mansion, falling to his death on the rocks below. At the four-minute mark, the two detectives who have examined the body (Tiffany Haddish and John Early) determine that the cause of death was homicide—and what initially seems like haste on the part of the writers is quickly reframed as haste on the part of the characters.

Detective Danner (Haddish’s clever, ambitious, and bubbly hawkshaw) has swooped into the investigation after hearing about the death on her scanner; her captain tells her that this case is too high-profile for her to take over, but she’s determined to solve it herself anyway. And she doesn’t have a lot of time before the real detective in charge arrives.

The speed with which The Afterparty cuts to the chase reveals an eagerness for the situation to become a murder mystery. Upstairs in the mansion are a motley group of thirty-somethings, all former acquaintances of the deceased. We learn quickly that he, a musician-cum-actor named Xavier, had been hosting an afterparty for his high school reunion at the time of his death. Inside are ten figures from his past, any of whom might have harbored a motive to kill him. They’re all given stock identities (the nerd, the cool guy, the nobody, the popular girls, etc.), and they’re each wearing their own distinct color. When Detective Danner and her partner, Culp, enter the house, they might as well have walked into a live action game of Clue. Or, kind of, the movie Clue.

The Afterparty is clearly raring to participate in a whodunnit just as much as its lead character is. The series reads the murder mystery as a generous genre, providing opportunities for characters to change their lives for the better. This is a more reflexive, postmodern, even self-directed take on the whodunnit, moving away from the charming Golden Age mysteries of the 1920s and 30s, which were only about the intriguing puzzle presented by the murder, unconcerned with the boons that the solving of the murder might provide its detective. For Danner, the murder mystery can give way to professional success; for the others—well, we’ll get to that in a moment.

Allow me to submit that The Afterparty participates in a new subgenre I term “the millennial whodunnit.”

Danner tells the group that her method for crime-solving is a bit more cinematic than they might expect. She wants to do more than take down everyone’s statement; she wants each suspect to tell her their story, their whole story. “We’re all stars of our own movie,” she tells them. “The same thing could happen, but you see it in a different way.”  She adds, “I want to hear your story… I want to hear your mind-movie.” This speech offers a fascinating perspective on the modern subject’s personal relationship with criminal investigations, which in our true crime era often involves the conflation of solving a crime with being a star—or at least, being the protagonist of a story. And it’s not the first television series to dwell on this theme.

Three things that resemble one another constitute a phenomenon and beg for a new categorical distinction, so allow me to submit that The Afterparty participates in a new subgenre I term “the millennial whodunnit,” a contemporary genre of murder mystery not so much about mystery or any of the other genres it samples, so much as it is about the possibilities presented by the murder mystery as a mode.

Think Search Party (which just wrapped up at five seasons), a story about several bumbling young Brooklynites whose lives find new meanings, as well as new thematic motifs, after they begin investigating the disappearance of a college classmate. Or Only Murders in the Building, a story about three true-crime obsessed neighbors who find social and personal fulfillment while making a podcast about their amateur investigation into a suspicious death in their Upper West Side apartment building. (That two of these three neighbors are played by septuagenarians Steve Martin and Martin Short doesn’t discount its millennial-ness; the fact that it’s about the production of a podcast, which is an inherently millennial genre, as well as the presence of actors like Selena Gomez and Jaboukie Young-White, clearly place it in conversation with the sensibilities of this generation.)

The function of the word “millennial” in this nomenclature is to signal the cultural fascination with true crime series produced by members of that generation, but also the sense that there is something enlivening about an investigation of this nature. Millennials, famously referred to by the critic Anne Helen Petersen as “the burnout generation,” share a particular condition: a need to constantly work hard and try to get ahead, all while experiencing crushing exhaustion and stress (from chronically low pay and massive debt, and an expectation from older generations, based on outmoded circumstances, that millennials might achieve financial stability if they simply worked hard for it). These shows represent the murder mystery as an escapist fantasy of control for its characters: that they might be able to break free from their meaningless grinds and autonomously fight a meaningful battle.

In The Afterparty, each of the main characters leads a life they didn’t expect, and they gather at their high school reunion in pursuit of a second chance, in hopes of a life-improving change. Dorky smart guy Aniq (Sam Richardson) is an escape room designer who hopes to finally sweep his high school crush off her feet. Zoe (Zoe Chao) is an artist working as a Vice Principal at her own alma mater, hoping to reconnect following a messy divorce from her immature high school boyfriend Brett (Ike Barinholtz), who’s determined to win her back. Yasper (Ben Schwartz) is an AV equipment installer dreaming that a conversation with his former bandmate Xavier will finally get him into the music business. Chelsea (Ilana Glazer), a self-loathing “screw-up,” is determined to prove to everyone that they’re wrong about her. Walt (Jamie Demetriou) just wants someone to remember his name, which no one ever did back in high school. And Xavier…? We don’t know yet.

In the millennial whodunnit, characters lead unfulfilling, unhappy lives, until a murder in close proximity serves to make life interesting again, propelling their daily existence into another genre entirely—the kind of genre that can only be experienced on television or in movies or even via podcasts. While each of these three programs frames “trying to solve a murder” as a liberating, life-changing, empowering event, it simultaneously reveals the ways in which it disorients characters into feeling like they’re living inside a production.

In The Afterparty, when each partygoer reveals to Detective Danner their “mind movie,” they each represent an associated film genre. Most of these stories take up an entire episode, which means that the show itself switches genres over and over depending on each character’s perspective—art house film, rom-com, action movie, and in the standout episode, displaying Ben Schwartz’s manifold talent, a rock/hip-hop musical.

The genre-sampling of The Afterparty, and its compatriots Search Party and Only Murders in the Building, exists to underscore the power of the mystery genre to effect change, reading it as a key to genre rather than a finite identity on its own. But The Afterparty is more of a piñata than the other two series, happily stuffing in as many tropes from as many genres as it can into a mere eight episodes and then spilling them out everywhere. That it doesn’t feel like too much is thanks to the show’s veritable murderer’s row of an ensemble.

The Afterparty, which was created and directed by Christopher Miller, is well-cast with deft performers, capable of juggling familiar conventions all while producing characters more than the sum of their (stock) parts. Haddish’s keen, ebullient detective is eminently watchable, a bit Columbo-ish in the way she handles the crowd. And Sam Richardson’s sensitive scholar Aniq delivers some of the show’s most charming one-liners as well as physical comedy—not to mention, again, Ben Schwartz, whose bouncy, infectious energy alone could power Xavier’s giant Belvedere home.

The series itself isn’t as thoughtful an investigation into our relationships with crime stories as Search Party and Only Murders in the Building, but it does offer quite a lot to think about. Its best feature is its playfulness; it understands that the murder mystery genre is foundationally a game, and it wants to play along. Which means… it’s party time.

The 12 Best Book Covers
of January 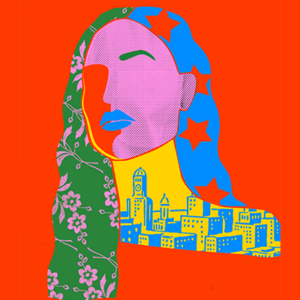 The 12 Best Book Covers
of January

While 2022 may have started with a whimper when it comes to the things that really matter—voting rights, filibuster reform,...
© LitHub
Back to top