On Office Life: Who Am I If I Fail Here?

Irina Reyn Searches for Meaning in the Cubicles

My obsession with office life was born in the movies. When I was a teenager in the 1980s and early 1990s, it felt as though screens were bursting with images of the busy working woman. She rushed from meeting to meeting, dressed in sharp suits capped by shoulder pads. Her personal life was in tatters, but at work, she was rising quickly, a bright star of efficiency and expertise. I’m thinking of Melanie Griffith in Working Girl, Holly Hunter in Broadcast News, Diane Keaton in Baby Boom (before the baby, the apple sauce and Sam Shepherd). And on television, of course, there was Murphy Brown and the absurd controversy that swirled around her ability to parent and work without a male partner. It didn’t occur to me then that the most pervasive association with office work was drudgery, bureaucracy, and existential ennui. In my mind, offices were places of external validation, endless possibility, a place where all of one’s best qualities could be maximized. I was sure that would one day I would join the ranks of the hair-sprayed professionals with their soft leather cases, reading important briefs on a Staten Island Ferry commute.

As a reader, I yearned to discover that same rush of office excitement in my books. I wanted to experience the jobs of others in vivid prose. I have realized that the pleasures of the office—a place where millions spend their entire working lives—are largely absent in fiction. When I think of favorite novels with characters in office settings, the disconnect between self and the corporate culture is often played for laughs. “Blistering office satire,” is how these books are often described on their covers. Characters with full-time jobs tend to start out as naïve (Dave Eggers’s start-up newbie in The Circle or in Jessica Winter’s forthcoming Break In Case of Emergency) or are depicted as bedraggled (some of Joshua Ferris’s advertising staff in Then We Came to the End or Sam Lipsyte’s nonprofit employee in The Ask). The reasons for this might hark back to writer’s own ambivalent relationship to work that needed to be done to pay bills or keep the writing afloat. In any case, it’s no surprise that the writer, always on the lookout for the drama in conflict, would find a discordant office atmosphere comical or even ominous.

You would think that once I graduated college and embarked on my first job, the office myth would be immediately dispelled. I was shocked to discover that I was facing some growing pains en route to my new Working Girl persona: I became a publicist without the extroversion or other talents crucial for succeeding as a publicist. Everything in my personality dreaded cold-calling editors and harassing producers. That job lasted less than two years, but I assumed it was just a bad fit. I went on to work in television news, at a non-profit immigration agency, in book publishing, literary agencies, advertising, and magazines that focused on television, brides and diamonds.

If I was not extraordinarily brilliant in any of these positions, all around me I saw excellence, especially in the female employees. Their daily tasks were not always glamorous or interesting, but they were accomplished with such assurance and attention to detail. Competence fascinated me. Would I ever attain it for myself?

I pictured this competence as a switch, and I waited for it to be flicked on. I kept thinking of this scene in Richard Yates’s Revolutionary Road: Frank Wheeler, having decided he was quitting his job at Knox Industries to move with his family to Paris, has put in his notice. With vague dreams of European escape on the horizon, he begins to attack his previously detested work with unprecedented gusto: “Fingering through the papers from the central file with his free hand, lifting a sentence here and a paragraph there, he continued to recite into the Dictaphone until he’d explained all the advantages of using a computer to coordinate the details of factory production. It sounded very authoritative when he played it back (‘Once the bill of materials has been exploding,’ he heard his own voice saying, ‘the computer’s next step is to scan the updated parts inventory.’ No one could have told that he didn’t quite know what he was talking about.” How beautifully this passage captures a person awakening to his competence at work, and how neatly Yates inserts the corporate language, elevating it through Frank’s growing confidence. Sure, this brief awakening leads to tragic results by book’s end, but for a little while, Yates perfectly captures the state of “flow” (as coined by psychologist Mihaly Csikszentmihalyi), the feeling of being so immersed in a task that time rushes by.

I continued to think that an office job would lend me meaning, a larger goal. That it would lift me from an invisible identity to someone seen, fiery with purpose. I kept gunning for the next job, the next possible essential self. I never tired of novels that opened doors to jobs foreign to me. These were other lives, other versions of what I could become. Laura Hemphill’s Buying In allowed me a glimpse into the world of a Wall Street analyst, and turned work that made no intuitive sense to me into something universal. At each new company, I initially threw myself behind its mission, and then wilted when its boundaries began enclosing around me. How many original articles about weddings could one write? How many playlists or bouquet ideas? At my lowest point, I suggested Guns n’ Roses for a rehearsal dinner playlist: “Welcome to the Jungle.” “You know where you are? You’re in the jungle baby. You gonna dieeeee.” But I would shake free from unproductive ruminations and resolve to embody an impassioned mission of work, like the one espoused by Jane Takagi-Little, a coordinator for a Japanese television production company in Ruth Ozeki’s My Year of Meats: “I was determined to use this window into mainstream network television to educate. Perhaps it was naïve, but I believed, honestly, that I could use wives to sell meat in service of The Larger Truth.” That was the employee I wanted to be, but it seemed so difficult to embody her.

I know this was a counterintuitive impulse. It’s no coincidence that both Ferris’s Then We Came to the End and Ed Park’s Personal Days were written from the first-person plural point of view. That “we” perspective was a means to remind the reader that an employee was always part of a larger construct. Like a chorus, the characters sang in sync, occasionally stepping out of the collective to present some touching personal characteristic. If that were me, I wouldn’t have minded.

Admittedly, there were many dull moments, and some more than worthy of satire. In one job, the woman in the cubicle next to mine played Johnny Cash’s “Ring of Fire” on auto-repeat. Today, I still cannot listen to the opening chords of the song. In another job, the man in a neighboring office belched so often that we called him “The Burpster.” There were a lot of ways to spend the time, especially before 2001 when the world changed, or in 2008, when jobs were scarcer and more difficult to find: there was soccer and golf in the hallways, The Godfather and music video marathons, sipping wine from empty coffee cups, leisurely lunches with a team that had no intention of discussing work. I can see why absurdist moments of dripping time are most prevalent in office fiction. But they are so poignant too; a Xerox machine out of ink, a lost account, a meeting to which one is not invited, can turn into tragedies of Shakespearean proportions. These are real, vulnerable lives beholden to powerful forces. When the Burpster was fired after 30 years at the company, my heart ached for him. When Secret Santa gift-giving during the holidays turned edgy and competitive, you could see the raw edge of humanity struggling to emerge. Who am I if I fail here?, I wondered constantly.

But in the end, there were also many moments in which the office served as refuge, especially when not much was riding on the work. I took the first stab toward writing fiction on my lunch break. And I’m not sure I’ve ever found a better writing place; that includes a peaceful residency with meandering cows in fields where lovely meals were prepared in wicker baskets. Nothing beat the sound of heels against linoleum, the scent of burnt coffee, the sound of ringing phones. The particular yellow of the fluorescent lights set into drop ceilings. I love the moments in fiction where offices become places of solace, and home is the more contested or painful terrain. I can’t help but think of the newspaper obituary writer Arthur in Tom Rachman’s The Imperfectionists, who finds that work is the one thing that soothes him after his young daughter dies. Instead of leaving his job after the tragedy, he angles for a promotion that might have seemed inconceivable before. “These days he prefers to stay late at work. After-hours, he admires his new office. True it is smaller than that of the other section chiefs. And he is farther from the cupboard of pens. Then again, the watercooler is a good deal nearer. And this is a consolation.”

In my very last office job, before I headed to the academic sphere where I at last discovered my competency, it finally occurred to me that I would never be Working Girl. My days of always being Andie in Lauren Weisberger’s The Devil Wears Prada were behind me. Even the notion of jumping from one office job to the other was gone, and the possibility of rising to distinction in that arena vanished. I thought of the office books I loved where it seemed as though male protagonists were allowed to struggle most with their dignity, women with being recognized. The plot chronology in office novels with male protagonists tended to place them in medias res, their work lives well underway. Female protagonist office novels needed to provide the appropriate backstory to explain how the woman wound up in the job and difficulties she faced climbing the ranks. I notice all this now of course, the novel and all those office jobs behind me. And these days, the people I used to admire, who had flourished at the office, are now admitting to me that they are leaving, or thinking of leaving, the corporate sphere. Sometimes it was their choice, and sometimes it wasn’t. They called to mind the ambitious editor Russell Calloway in Jay McInerney’s Brightness Falls who has worked so hard to take the helm at his publishing company: “For years he had trained himself to do one thing, and he did it well, but he doesn’t know whether he wants to keep doing it for the rest of his life or even, for that matter, whether anyone will let him.”

Irina Reyn is the author of Mother Country, What Happened to Anna K: A Novel and The Imperial Wife. She is also the editor of the anthology Living on the Edge of the World: New Jersey Writers Take on the Garden State. She has reviewed books for the Los Angeles Times, San Francisco Chronicle, Pittsburgh Post-Gazette, Minneapolis Star-Tribune, The Forward, and other publications. Her fiction and nonfiction has appeared in One Story, Tin House, Town & Country Travel and Poets & Writers. She teaches fiction writing at the University of Pittsburgh.

Reading and Writing My Way Through the AIDS Crisis 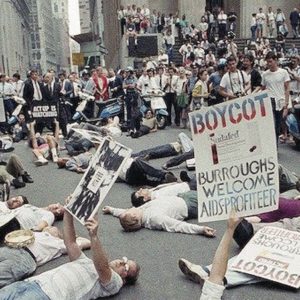 Reading and Writing My Way Through the AIDS Crisis

The last third of A Long Gay Book records the discovery of the new reality. She confronts a world of magnificent, joyous...
© LitHub
Back to top