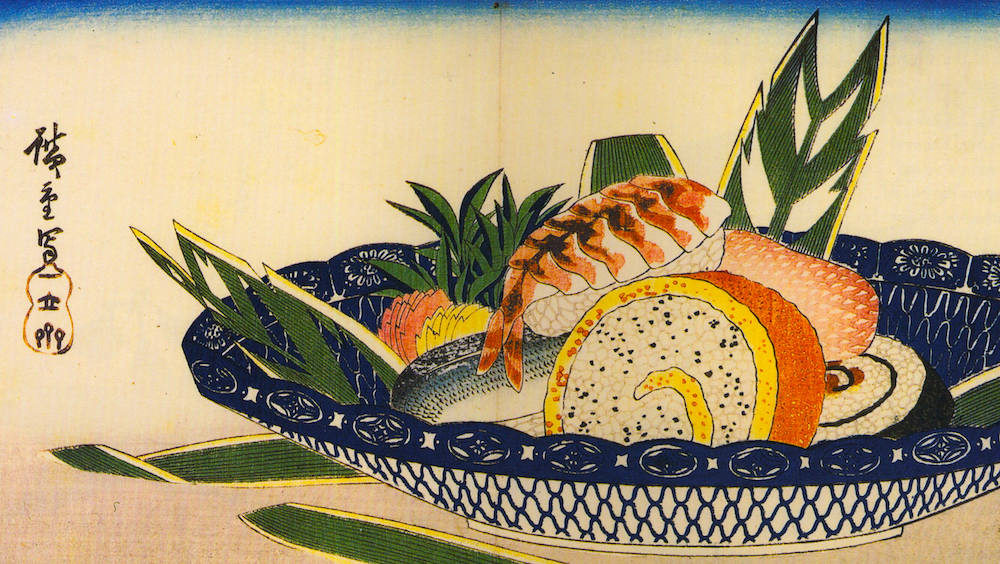 On Negotiating and Embracing the Differences Between Japanese and American Culture

Elizabeth Miki Brina Makes the Journey Back to Okinawa

My mother loved Elvis. She loved his sultry balmy voice. She loved his thick upswept hair, his brooding eyes and chiseled jaw. She loved the rock n’ roll of him, the cool of him, the quintessential America of him. Growing up in Okinawa, she looked for him in the faces and mannerisms of GIs stationed on nearby bases, GIs who ordered drinks at the nightclub where she worked as a waitress. She served them and flirted with them, hoping to find Elvis, his charm, his promise of a heartfelt and soulful life.

In 1977, three years after my parents were married, on the night Elvis died, my mother had a dream that Elvis died. She woke up the next morning and told my father. Distressed. Disturbed. Later that day, they heard the news.

This uncanny fact was told to me as a testament of her love for him, her bond to him. To Elvis or my father? Or both?

Perhaps it was this mutual objectification, this preconceived romanticization, more than history and circumstance, that brought my mother and father together.

By 1977, the delusional basis for their initial attraction to each other had dissipated. My father was not rock n’ roll. My father was not cool. But he was quintessential America: pursuing his happiness, his career aspirations, earning an MBA at Northwestern University, opting to fight for his country through free and fair enterprise. My mother was not the daughter of a daimyo, not a peasant he rescued. She wasn’t even really Japanese, she was Okinawan—a distinction that was disregarded in my household until relatively recently. But she followed him from city to city, from Kadena, where my mother grew up, to Manhattan, where my father grew up, to Phoenix and then Chicago, and she learned English, though she would never know it as well as my father.

I was 31 years old when I started asking my mother questions, direct questions, about her life, her heritage. I remember the first occasion. We were eating at a restaurant, just the two of us. I was with my mother, not my father, not my mother and my father, because I broke my left wrist and fractured my right elbow in a bicycle accident, and I needed her to help me bathe and dress. We were eating Ethiopian, sitting on wicker chairs, listening to jazz, because Ethiopian was one of the only foods I felt comfortable eating because I could eat with my hands. My mother didn’t feel comfortable eating with her hands, so she used a knife and fork, slicing the injara with the knife, scooping and jabbing the lentils and cabbage with a fork. She learned how to use a knife and fork from my grandmother, my father’s mother, whom I visited every Thanksgiving and Christmas and spring break and for a week every summer throughout childhood. I asked my mother about my grandmother, my mother’s mother, whom I visited once when I was three years old and once when I was twelve years old.

Perhaps I was inspired by the rekindling of intimacy, of her washing my hair and patting me dry, of her tying my shoelaces.

“What was your mother’s name?” I asked. “Where was she born?” I asked.

Because I learned from my father that if you want someone to know something, you have to do the telling.

I asked my father about everything. Everything about the world. Everything about me. I asked him how I got my first name, which is English. I asked him how I got my middle name, which is Japanese. He told me my middle name means “beautiful princess” and many years later, I will be unable to find this precise translation. Was he wrong? Was he telling me what he wanted it to mean? What he wanted me to mean?

I was 31 years old when I started asking my mother questions, direct questions, about her life, her heritage.

I was eighteen years old when I asked my father to help me find the kanji for my middle name. My father and I thumbed through an English-Japanese dictionary to search for the definition and settled upon “beautiful destiny” or “good fortune.” Close enough.

I got a tattoo of this false translation on my back: the kanji inside of a red sun with a white crane flying toward it. I got this tattoo from a white woman wearing dreads.

However, I did feel rather foolish when I finally traveled Japan, and every time I wanted to swim in a pool at a hotel or soak in an onsen at a ryokan, I would have to cover my tattoo with bandages because visible tattoos were prohibited. A few times, an attendant would have to cover the parts I couldn’t reach. I felt like such a poser even though I’m half Japanese, especially because I’m half Japanese.

For much of my life, I tried to keep this half separate from the other, hidden from the other. As if this half contaminated the other. As if this half made me seem messy, made me seem confusing. I either denied or ignored this half of my heritage, at first fearing that it hindered my ability to assimilate and later assuming that it was too large and formidable, too much for me to handle. There was too much I didn’t recognize or understand. I would acknowledge and flaunt aspects of my Japanese identity only if it seemed useful, only if it might impress someone or gain so-called advantage. I would brag about the art on my bedroom walls and the figurines on my bookshelves. I would cook tofu and bittermelon or cold soba noodles and tamago for new lovers on third dates.

My idiosyncratic eating habit is just one of the more obvious ways my compulsion to separate manifests itself. Each day must adhere to a particular ethnic theme. Miso soup for breakfast, pork steam buns for lunch, and pad thai for dinner. Spinach and feta omelet for breakfast, gyro for lunch, spaghetti bolognese for dinner. Asian cuisine on Asian Day. European cuisine on European Day. I can eat tacos on Asian Day. I can eat hamburgers and french fries on European Day. Except Asian and European can’t mix, can’t cross over, not on the same day, certainly not the same meal.

This habit continues now and is still a running joke in my family. My mother would finish pan-frying some harumaki, but also suggest chopping the tomatoes and basil from her garden and the leftover mozzarella in the fridge to prepare a caprese salad. “Does it match?” she would ask. “Doesn’t match!” I would answer. Otokonomiyaki and shishito peppers. “Does it match?” she would ask. “Of course it matches!” I would answer. My father would chuckle at our interaction. He’ll eat anything she puts in front of him, in whatever arrangement. “Shall we have red wine with our Japanese dinner?” my father would ask, teasing, chiming. “No! Sake!”

Are they accepting me or overindulging me? Or both?

For five years, as I was writing my book, researching the history, learning the language, I tried to embrace and connect to this half, this Japanese, or rather, Okinawan half. After I finished the book, although I felt a tremendous relief and acceptance of myself, I realized this half will always remain disproportionate, always remain less than the other, not because I consider it to be inferior, but because I started so late. I’ll never catch up. I read passages I wrote about my ancestors, my family, my mother, and they come off the page at me as noticeably mythical and one-dimensional, over-simplified. I can’t get inside this half. I can’t write from within this half. I still write from within my white half, my American half, and always for my white half, my American half. I’m still observing, still a spectator, still a tourist. I’m still pretending and performing.

I might be biracial, but I’ll never be bicultural. I’ll never flow freely and fluently between these two halves.

But, at least, I tried. The intention is there, and knowing what I’m lacking, what I’m missing, is still knowing something I didn’t know for far too long.

And so, the separation persists. Occasionally, when the opportunity arises, I’ll wear my costume and I’ll wear it proudly.

In their 45 years of marriage, my parents have also practiced a dynamic of separation. They each have their own bedrooms and their own televisions. My mother watches NHK. My father watches Fox News and baseball or football. They convene for meals, for errands, to call me on the phone.

When I’m with my parents, we do almost everything separately as well. I cook and garden and go shopping with my mother. I watch movies and talk about movies and books and current events with my father. These interactions don’t mix, don’t cross over.

For five years, as I was writing my book, researching the history, learning the language, I tried to embrace and connect to this half, this Japanese, or rather, Okinawan half.

Perhaps it’s not ideal, but it works for us.

But no matter what the theme of the cuisine, salmon teriyaki and steamed rice or meatloaf and mashed potatoes, we always say “itatakimasu” (let’s eat) before our first bite, and “kampai” (cheers) before our first sip.

My mother never listens to Elvis anymore. Not since I was a child. I believe she’s outgrown him. My father often has to hold back tears during dinner when he explains the plot of Hare Kiri or Seven Samurai for the tenth or so time. I believe he cries because he knows he’s outgrown this part of his life as well. I believe he knows it wasn’t real. 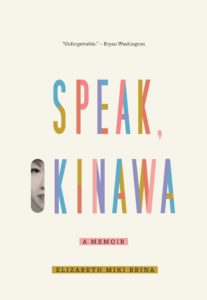 Elizabeth Miki Brina is the recipient of a Rona Jaffe Bread Loaf Scholarship and a New York State Summer Writers Institute Scholarship. She currently lives and teaches in New Orleans.

In Saraqeb, Syria, the Horror of a Poison-Gas Attack, and a Race to Preserve the Evidence 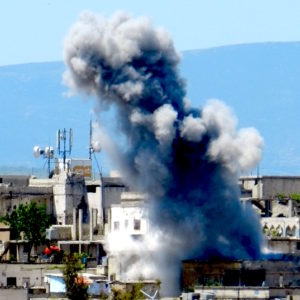 In Saraqeb, Syria, the Horror of a Poison-Gas Attack, and a Race to Preserve the Evidence

Saraqeb, Syria. April 29, 2013 Just before the start of afternoon prayers, the Syrian guns fell eerily silent. Throughout...
© LitHub
Back to top
Loading Comments...