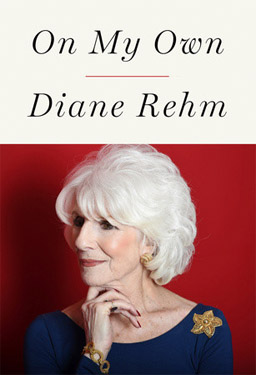 The following is from Diane Rehm's memoir, On My Own. Rehm has hosted The Diane Rehm Show on WAMU 88.5 FM in Washington, D.C.—distributed by NPR—since 1979; the show has a weekly listening audience of two and a half million. Currently, it is broadcast on nearly two hundred stations and Sirius Satellite Radio across the country, as well as internationally by Armed Forces Radio Network. She lives in Washington, D.C.

On June 14, 2014, my husband, John Rehm—age eighty-three—began his withdrawal from life. The aides at Brighton Gardens were instructed to stop bringing medications, menus, or water. His decision to die came after a long and difficult conversation the day before with Dr. Roy Fried, his primary physician; our son, David; our daughter, Jennifer, who was on the phone from Boston; and me.

John declared to Dr. Fried that because Parkinson’s disease had so affected him that he no longer had the use of his hands, arms, or legs, because he could no longer stand, walk, eat, bathe, or in any way care for himself on his own, he was now ready to die. He said that he understood the disease was progressing, taking him further and further into incapacity, with no hope of improvement. Therefore, he wanted to end his life.

Clearly, his expectation—and his misunderstanding—was that, now that he had made his decision, he could simply be “put to sleep” immediately, with medication. When Dr. Fried explained that he was unable to carry out John’s wishes, that he was prohibited from committing such an act in the state of Maryland, John became very angry. He said, “I feel betrayed.” Tears came into his eyes, tears of frustration and disappointment. Here was a man who had lived his life able, for the most part, to take charge of events, to be certain that his well-considered decisions would be carried out. And now he was making the ultimate decision, and having it thwarted.

It was then that Dr. Fried explained that the only alternative John had, if he truly wished to die, was to stop eating, drinking fluids, or taking medications. In other words, he could bring his life to an end through those means, but no one could do it for him. Dr. Fried added that he hoped John would not make the decision to end his life, but that, if he did so, as his physician he would honor it.

My husband had moved into assisted living at Brighton Gardens in Chevy Chase, Maryland, in November 2012, because he could no longer stand or walk without falling, or care for himself without assistance. We’d spent months talking about the decision we both knew was coming. We went over and over various possibilities, such as having someone move into our apartment to care for him on a twenty-four-hour basis, but we knew that wouldn’t work: there was simply not enough room for another human to be here full-time.

Most days I spent part of the afternoon with John at Brighton Gardens. Sometimes we’d sit silently, particularly in the weeks immediately after he moved in. Although he never admitted feeling resentful, it was clear he was unhappy. He had a private room, but was now in an institution, in the company of strangers, eating foods he didn’t care for in a large communal dining room, and feeling an extreme loss of privacy. But slowly he regained his sense of humor, his interest in world events, and his happiness each time I walked through the door.

Over the years, John and I had talked many times about how we wanted to die. We had promised that we would do everything we could to support each other’s wishes in the face of debilitating and unalterable conditions. Yet here I was, helpless to keep my promise. I could do nothing but listen as he railed against a medical and judicial system that prohibited a doctor from helping him die, even knowing that what awaited him was prolonged misery, further decline, and, to his mind, loss of dignity.

So John did what I dreaded, but knew in my heart he would do: he declared he would stop eating, drinking, or taking medications. He asked Dr. Fried how long the process of dying would last and was told it could be ten days to two weeks. John wanted to know, “Will I be in pain?” “Absolutely not,” responded Dr. Fried. “I promise you, you will be kept comfortable.”

A few months before this, John had come down with what’s so often been called the old man’s blessing. I was in South America, on a cruise with NPR listeners. It was a Saturday evening in March, and before I went to join the group for dinner, I called Brighton Gardens to check in. Our dear friends David and Mary Beth Busby were there with John, and Mary Beth answered the phone. When I asked how John was, she said, to my shock, “He’s not responsive.” I wasn’t sure I was hearing correctly. “What do you mean, Mary Beth?” “Well, just that,” she said. The two of them had been sitting there with John for an hour or so, and he was simply not moving; he was in a deep sleep, not responding to their questions, not moving when they prodded him. I asked her to feel his head. “Warm,” she said. I immediately called Dr. Fried, who instructed an aide to take his temperature. It was 101.5 degrees. Dr. Fried said John was probably experiencing pneumonia. Urgently I demanded to know what he would do next. Dr. Fried said he would order oral antibiotics for him, but warned it could be four hours before they arrived, and that John might not be able to swallow them. At this point, I lost all composure. I screamed into the phone, “But he could be dead in four hours!” Dr. Fried then said he would go to a nearby pharmacy to obtain an injectable form of antibiotic, which he did, taking it to Brighton Gardens that night and giving John what may have been a lifesaving dose of the drug. It was 6:30 Saturday evening, and I was in Buenos Aires. I tried to get a flight out that very evening, but it was too late, so I flew to Miami the next night and then home to Washington on Monday.

By the time I arrived, John had responded well to the medication and was making a good recovery. All of our friends, as well as our son, David, who had hovered over him during the critical period of my absence, were amazed and delighted at the turnaround.

Sadly, within three weeks of my return, pneumonia again crept into John’s lungs. Whether it was a remnant of the first infection or a brand-new one, he was again feverish, coughing, and exhibiting all the other symptoms he’d had earlier. He was put back on antibiotics, this time for a longer period.

After the second bout of pneumonia, and lengthy and extraordinarily frank and compassionate discussions with Dr. Fried and me, John said he no longer wished to be treated with antibiotics should he experience pneumonia yet again. He was clearly in a more weakened state.

Two months later, he was placed under hospice care, which meant the doctor had concluded that he had six months or less to live. John had already made clear his wishes for “comfort care only.”

And so on June 14, John began to carry out his decision to withdraw from life. Some of the aides at Brighton Gardens were clearly uncomfortable with the instructions to cease bringing all food, water, and medications, and during the first two days came to see him, asking whether he didn’t want to change his mind. John said “No” pleasantly, even cheerfully, as though, somehow, he had taken back his life and could do with it as he chose. So I sat by my husband’s side as he slowly died.

I rage at a system that would not allow John to be helped toward his own death. He was of rational mind, with no hope of recovery, knowing full well that the only way ahead was a slow downward slide, moving toward more incapacity and even greater indignity. Why should it be that only a few states allow aid in dying with help from a trained physician willing to offer the ultimate gift? Why should my husband have to starve him- self to death? I wonder, too, why John should have had to be so alone in the dying process. I cry at the loss of what might have been this final intimacy between us, replaced by a long descent into oblivion, unaware of his family and friends beside him offering him a loving farewell and wishing him a peaceful journey.

On the day John made his decision, I brought him a photograph album I’d made for him many years earlier recording his childhood and youth, from his birth in Paris, where his mother and dad had met, to his graduation from Friends Seminary in New York. He loved seeing the photos of the pond near the little house in France where he had spent the first six years of his life. His father worked the night shift at the Paris Herald Tribune, and therefore slept a good part of every day. John remembered attending a small French school at age three, and having the teacher put a pen into his hand on the very first day.

That hour, as I sat beside him on his bed going through the photographs, was extraordinary. Here was a man who had just decided he wanted to end his life experiencing so much joy as he reflected on his early years, while I, as I always had, adored gazing at his baby pictures. He was a beautiful child and a beautiful young man.

From ON MY OWN. Used with permission of Alfred A. Knopf, an imprint of The Knopf
Doubleday Publishing Group, a division of Penguin Random House LLC. Copyright © 2016 by Diane Rehm.

When a Self-Declared Genius Asks You to Read His Masterpiece

When a Self-Declared Genius Asks You to Read His Masterpiece I think nearly every writer who’s ever published a book receives the occasional email from a stranger asking you to read...
© LitHub
Back to top