Red Newsom Considers the Line Between Experience and Fiction

Just a month into 2020 and my wishlist is already straining under the weight of all the new titles I’m looking forward to being published. Maybe it’s working in a bookshop or the concentrated effort I’ve been making to retreat into a fantasy-bubble when I’m at home, but I’ve found myself excited for new fiction more this year than in previous ones.

One of the novels I was most excited for everyone to read was My Dark Vanessa, which is due for release in March. I’ve been thrusting my proof copy at friends, confident that they will enjoy it as much as I did. So I was genuinely rocked when Wendy Ortiz took to Twitter to criticize the seven-figure purchase of a debut novel by Kate Elizabeth Russell, claiming that the plot of My Dark Vanessa was suspiciously close to her memoir, Excavation, which was published by Future Tense in 2014. (Ortiz has since stated that she had not used the word “plagiarism” in regards to Russell’s novel, only that “there are others who read it and noticed similarities.”)

I’ve followed the “scandal” on Twitter, becoming more and more uncomfortable with the responses calling Russell’s apparent theft of Wendy’s life story “disgusting.” Russell disappeared from social media, hopefully as an act of self-care rather than to shut off a torrent of abuse. An official statement posted on her website over the weekend said she hoped her novel would spark a conversation about sexual violence and coercion, but sharing details of trauma was a personal choice , one that has the potential to be be “retraumatizing” in such a public arena.

Whilst I make no claims to friendship with the author, Kate and I inhabited the same internet community on Livejournal in 2011 and 2012 and her posts would frequently appear on my friends list. She would talk about her life and post excerpts of her writing which would later become the novel she’d been working on for the majority of her adult life. My Dark Vanessa. It’s worth mentioning that these pieces were written years before Ortiz published her own brave and difficult story.

When the time came to shop Excavation to various publishers, Ortiz reports that the feedback she was given was that this was not the time for another memoir. To use one quote from her recently published article, “In the end, though, it was a no; I’m finding that it’s harder to get memoirs like this one their fair share of attention as people become somewhat inured to tales of slow discovery of trespass.” In short, your pain isn’t profitable.

I understand Ortiz feels robbed, but it is the publishing industry who has robbed her.

And it sucks. It really sucks that in 2013-2014, the majority of publishing houses felt that Ortiz’s story wasn’t needed or worth taking a chance on. I can’t imagine how it must feel to put so much of your life into a piece of writing such as this and have it rejected. Especially as agents also tried to sweeten the blow by saying how talented she is. Like, thanks? (As an aside, I am not qualified to speak on the subject of race, but if Ortiz feels like she was passed over for not being another white voice, I believe her.)

More recently it feels like essays and personal memoirs are becoming a much more dominant part of our reading lists. So many smart and magnetic women are spilling their truths, be it in an academic, funny or informative way. Jia Tolentino (2019), Samantha Irby (2017), Emilie Pine (2018), Leslie Jamison (2019). Books on discovering sexuality, addiction and difficult relationships. One would like to think that in the post-#MeToo climate, Excavation would have been given the attention it deserved, especially as My Dark Vanessa has been hailed as an important voice of the movement.

But that isn’t Russell’s fault. Another criticism of My Dark Vanessa in the shadow of Excavation, is that Russell has fictionalized a very real experience of another author. Ortiz herself writes in the aforelinked article, “I wonder about an industry that wants to pay seven figures for a fictional book about sexual abuse.” Let me tell you, if I ever manage to condense my feelings surrounding the relationship I had as an adult with the man who taught me from age 14 to 18, I would dress it in fiction too. I’m not saying Kate’s novel is a fictionalized version of a truth she lived, but I also think dismissing a piece of fiction as an exploitative creative writing project is wrong. Authors draw from their own experiences, and authors invent. They reveal what they are comfortable revealing about themselves.

I’ve read both books. I finished the ARC of My Dark Vanessa last year and felt winded. It resonated with me. I finished Excavation today. Are they similar? In as much as both young women are manipulated by predators, and write with the hindsight that comes with adulthood. A cursory googling of blurbs will lead you to believe that this is the same story published four years later. It is not.

Is statutory rape an intellectual property? Does one person have the rights to a story that happens to kids from all walks of life, everywhere? Whilst a novel isn’t a call to action, a raising of awareness, in the same way a memoir can achieve, My Dark Vanessa will help people process their own similar or adjacent experiences. Russell isn’t obligated to defend herself by saying “This happened to me,” but I worry she will be forced to out herself as a victim as more people flood to criticize the similarities between the two books.

I understand Ortiz feels robbed, but it is the publishing industry who has robbed her. This is no consolation, but I believe this is where any anger should be directed. She deserves better. As Ortiz points out at the start of Excavation, stories of student-teacher relationships are not an anomaly. “It is any given day,” she writes, and she is correct.

And now, it is the writer-publisher relationship that deserves our scrutiny. Crying “plagiarism” is a cop-out and distracts from the real issue. Was Excavation‘s fate a product of publishing-decreed “bad timing”? To those jumping in to immediately criticize I would say: the real reasons this excellent memoir was passed on should be the focus of this debate. Not the authors treading similar ground who each put their own hearts, souls and experiences into their work.

Red Newsom is an essayist and poet from Manchester, England. She blogs at waitingtoleave.com 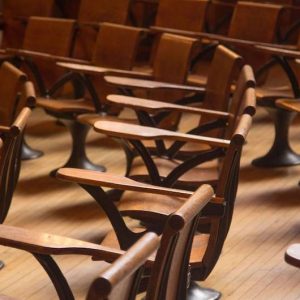 Is 2020 the year you finally go get that MFA you’ve been secretly contemplating since your undergrad years? While I know...
© LitHub
Back to top