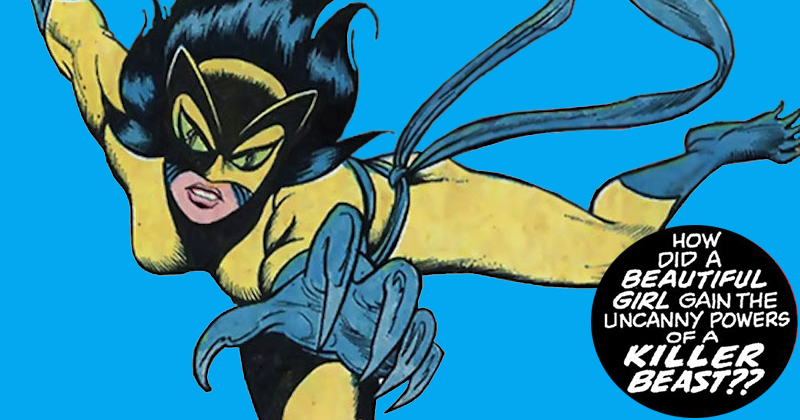 VIA UNIVERSITY OF TEXAS PRESS

On Marvel’s First Female Superhero Written By A Woman

The Claws of the Cat was one of three ongoing series starring female characters that Marvel debuted in 1972, all of which were written by women; the others were Night Nurse (an action-romance written by Jean Thomas) and Shanna the She-Devil (a throwback to the “Jungle Girl” comics of the 1940s and 1950s written by Carole Seuling). The “Marvel Bullpen Bulletin” from November of that year foregrounds the female writers of these series as a potential selling point while also emphasizing the titles’ wide appeal: “That’s right, effendi—three great new comic mags, all written by gals—yet aimed neither at girls nor at guys, but at true lovers of comix literature everywhere!” Nonetheless, The Cat, the only superhero title of the three, can and should be viewed as Marvel’s first attempt to appeal to female readers by adapting superhero conventions to the context of second-wave feminism. 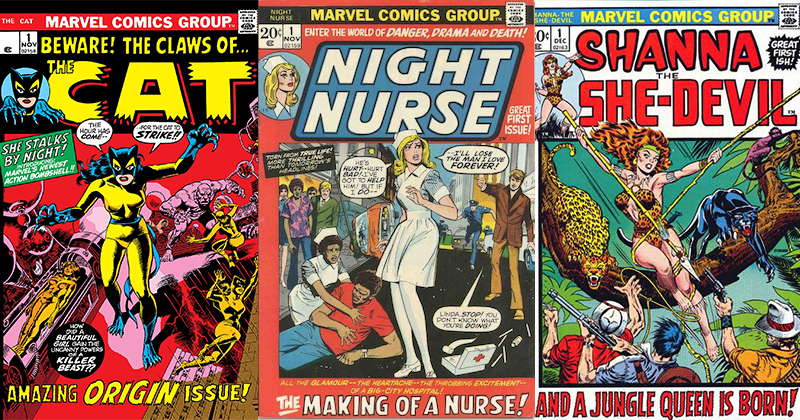 The first issues of The Cat, Night Nurse, and Shanna the She-Devil

In issue no. 1, the Cat, aka Greer Nelson, begins her heroic journey after her policeman husband Bill, in a clear reference to the origin story of Batman, is shot and killed by a mugger while the couple are leaving a movie theater. The feminist twist on this familiar tale is that Bill’s death does not motivate Greer to vengeance so much as liberate her. Before his death, Bill actively limited Greer’s independence, refusing to allow her to finish her college degree or drive a car. On their wedding day, Bill had told Greer, “You’re my little girl now—and that’s the way it’s gonna be forever!” The narration also states that after the wedding, “Bill cherished and protected her—and she felt more helpless than ever before, because he seemed to like that in a woman.”

In this comic, Bill is an exaggerated patriarchal lover/father, treating his wife/daughter as an object of exchange rather than a fully fledged individual. The Cat’s first villainous opponent, Mal Donalbain, is also an exaggerated patriarch; Donalbain is a health-club owner whose evil scheme involves creating an army of superwomen whom he plans to control. He will do this by using a “will-nullifier” that “renders the wearer helpless against the superior wishes of [his] superior mind.” In the final pages of the issue, the Cat provokes Donalbain’s death in a scene redolent with rape imagery. Knowing that the maniacal Donalbain has an intense phobia of being touched, Greer corners him in a dark room and slowly advances on him while uttering suggestive threats. This scene can be read as both a connotatively female revenge fantasy and an implied critique of patriarchal masculinity; because Donalbain prefers death to being touched by the active (or phallic) woman, his masculine need for dominance and control proves literally self-destructive.

“The commercially perfect female superhero has needed to be strong enough for a woman, while still being made (primarily) for a man.

In its very first issue, The Cat revises several key tropes related to female action heroes. One of the most significant revisions involves the introduction of a female mentor. After being turned down for all of the jobs she applies for after Bill’s death—a state of affairs that causes “women’s lib . . . to have new meaning”—Greer is finally hired as a lab assistant by Dr. Tumolo, a kindly, gray-haired female scientist who nurtures Greer’s intellectual talents, and whose experiments are the source of Greer’s superheroic transformation. As Jennifer Stuller has elaborated, female action heroes, mirroring the motherless Athena, generally have male mentors, sending the message that such characters “can only be as independent as they are because they lack a mother’s womanly—almost always implied as passive—influence” (Ink-Stained Amazons 107).

Yet Greer’s enriching relationship with Dr. Tumolo, especially when contrasted with her destructive relationship with Bill, situates the Cat’s superheroism outside of, and even in opposition to, male authority and/or the quest for male approval. Many of Marvel’s female superheroes of the 1960s, including the Invisible Girl, the Wasp, and Marvel Girl, become and remain superheroes primarily to stay close to their male love interests; Greer’s heroism is instead inspired by a surrogate mother figure. Thinks Greer: “Dr. Tumolo really makes me proud to be a woman. I can’t let her—or myself—down” (The Cat no. 1).

The Cat also revises tropes related to the physicality of female superheroes. As Trina Robbins observes, almost all of Marvel’s female superheroes from the 1960s have “hands off” powers, exemplified by the force fields of the Invisible Girl (later the Invisible Woman) and the telekinesis of Marvel Girl (later Phoenix) (The Great Women Super Heroes, 113). Mike Madrid similarly notes that female superheroes commonly possess “‘strike a pose and point’ powers,” which allow them to “keep their looks intact in the heat of battle” (292). In contrast, the Cat is an explicitly physical superhero, using her razor-sharp claws and advanced acrobatic skills to scale buildings and engage in hand-to-hand combat.

However, the way the Cat comes by her physicality is, at best, problematic. She is empowered via a scientific experiment whose reputed goal, as Dr. Tumolo states in issue no. 1, is to “someday make it possible for any woman to totally fulfill her physical and mental potential—despite the handicaps that society places on her.” As Stuller observes, “While the message resonates with consciousness-raising politics of Women’s Liberation in the 1970s . . . [u]sing a machine to amplify women’s abilities excuses them from the responsibilities of empowering themselves” (Ink-Stained Amazons, 40). 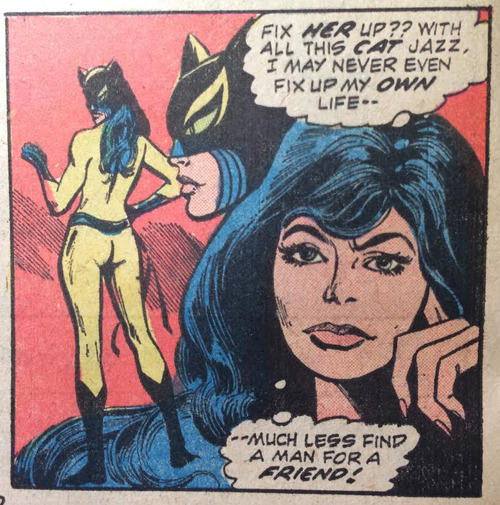 It is worth noting, too, that aspects of the Cat’s power-set essentialize her femininity. In issue no. 1, the narration states that “[Greer’s] intensified perceptions were like an embodiment of that mythical quality known as woman’s intuition.” Greer’s “superpowered intuition” allows her to both instinctively solve mechanical problems and feel the pain in the paw of an injured squirrel; as such, her power-set heightens stereotypically feminine qualities of empathy and emotionality alongside, or perhaps in compensation for, more stereotypically masculine capabilities related to engineering and problem solving.

After several convoluted plots that often strayed from the feminist purpose of its first issue, The Cat was abruptly canceled at issue no. 4. Yet despite its short existence, The Cat established a paradigm for adapting superhero narratives to female experiences and desires. This series crystallized, but left unresolved, the major contradiction that the next several decades of female superheroes would be compelled to negotiate. The Cat invokes this contradiction in the last panel of issue no. 1, after the death of Donalbain and the near-death of Dr. Tumolo: “All our plans for the betterment of womankind—! I did what I set out to do, and I did it well—but have I misused my powers? Did I become a stronger woman—only to become a poorer human being?”

Since The Cat, designing female superheroes that can appeal to female readers without alienating the traditionally male fan base has meant negotiating the meaning and consequences of female strength; in general, female superheroes created during and after second-wave feminism represent attempts to devise ways of empowering female lives and bodies that seem liberating to girls and women, while not being threatening to boys and men (or, more broadly, patriarchal gender norms). To repurpose a timeworn antiperspirant ad: during and since the era of The Cat, the commercially perfect female superhero has needed to be strong enough for a woman, while still being made (primarily) for a man.

From “This Female Fights Back!”, which originally appeared Make Ours Marvel, edited by Matt Yockey. Used with permission of University of Texas Press. Copyright © 2017 by Anna F. Peppard.

Anna F. Peppard is a PhD candidate in English at York University in Toronto, where her research has focused on representations of gender, race, and sexuality in American literature and popular media, including film, television, genre fiction, and comics. Her work has been published in the Canadian Review of American Studies, the International Journal of Comic Art, and the Journal of the Fantastic in the Arts.

Pico Iyer Sits in Silence for 5 Hours Every Morning 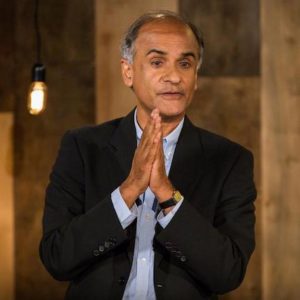 Pico Iyer Sits in Silence for 5 Hours Every Morning

In this episode of A Phone Call From Paul, Paul Holdengraber talks to the essayist and novelist Pico Iyer about the attention...
© LitHub
Back to top
Loading Comments...