“You are what you love, not what loves you.”

In 1996, a few years out of college, I landed a job at one of Harvard’s closed-stack libraries. My boss was the only other person in the building. He’d been the head of stacks at Widener for more than a decade; now, nearing retirement, he’d found himself shipped across the Charles River, warehoused in a library that was both out of sight and out of mind. There wasn’t enough work to keep one person busy, so they’d hired two of us and let us decide how to fill our time. In return for my energy, I received an adequate salary and health care. For a person wanting to create books, the job was almost perfect.

For the first few months we dusted, straightened, and made an inventory of the building’s holdings. Out of the blue, a man rang the buzzer and convinced us to let him inside. He was an I.T. technician. He commandeered our desktop computer, installed some software, and introduced us to the World Wide Web.

Nothing we did in that building required web access; we’d merely been benefactors of a campus-wide initiative. For the first few days we ran comparisons between random card catalog entries and the electronic database. At some point my boss stumbled onto a Xena: Warrior Princess fan site. From that time onward, he would spend a few hours each day printing out screen captures of the show’s star, Lucy Lawless. Rather than hide his obsession, he asked me to assist him in collating the blurry black and white images as they fluttered from our office printer.

Despite the fact that Lawless’s costumes consisted of kilts, metal bustiers, and leather mini-dresses that made her resemble a Viking cheerleader (the Germanic Norse seafarers, not Minnesota’s NFL team), I never sensed that my boss’s interest was prurient. He treated the images with the reverence usually reserved for religious icons, fanning them out across any horizontal surface to allow the ink to dry. At the end of each day he’d file his new pages in the drawer of his green tanker desk.

I suppose inviting me to help him allowed my boss to pretend that we were downloading the pictures together—or, at the very least, that he wasn’t doing anything explicitly anti-social. A similar impulse may have been behind the decision of the person making the screen captures to post the pictures online.

My boss and I never talked about his attachment to Lawless. She was a tall New Zealander in her middle twenties; my boss was in his mid-sixties and almost pathologically short (one time, after he told me he was five-foot-six, I bet him lunch that he wasn’t even five-four; he accepted the wager and, after locating a yardstick on the loading dock, he wound up treating me to tea-soaked duck at the Harvard faculty club). For some reason, asking about his fixation seemed needlessly cruel. If there was a social component to my boss’s behavior it existed between him and the person posting the images. Every page that spit out of the printer was another point of allegiance between my boss and that anonymous person, his secret sharer.

Anyone who has ever collected vinyl records or action figures, traded concert tapes or baseball cards, is familiar with the impulse to hoard. We are what we love, which is why our loyalties wind up on the bumper stickers of our cars, silk-screened on the clothes we wear, and inked (even carved) into our skin. Depending on our means, we might collect the complete works of Cormac McCarthy or his battered Olivetti, a Joy Division concert-tee or Ian Curtis’s signature on a record sleeve.

The Internet does a remarkable job of connecting people who love the same things. I am certain there is a place for people who like punk polka bands, and that the people assembling Minecraft fanfiction have their own sandbox. If I don’t think about it too closely, it can seem remarkable that a once revolutionary information platform would change so little over twenty years. The truth, I believe, is more unsettling.

The quaintness of the “World Wide Web”—a metaphor about the interconnectedness of everything—has been abandoned for the more corporate sounding “Internet,” and its promise of seamless travel between places. Increasingly, social networking sites like Facebook and Instagram are turning their focus away from connecting us with others and toward greeting us with comforting reflections of ourselves. So, while a James Baldwin fan can easily stumble upon Nicholson Baker in a brick and mortar bookstore, Amazon’s algorithms will never permit that leap.

As we abdicate more decisions to the cheerless processors bent on steering us towards things we adore, we forfeit the opportunity to brush against anything that might offend our sensibilities. That is an awful lot to lose. After all, aren’t points of friction as affirming as any constellation of one’s affinities?

It’s nice to know that there’s a place in the word for Lucy Lawless fanciers, but I don’t even think my old boss would choose to be shipwrecked on that island. For that matter, I don’t want to spend the rest of my days nodding to the echo of my own declaration of Joy Williams’s genius.

Justin Tussing is the author of the Ken Kesey Award-winning novel The Best People in the World, and his short fiction has appeared in The New Yorker, Triquarterly, and A Public Space, among other periodicals. He is a graduate of the Iowa Writers' Workshop and currently directs the University of Southern Maine's Low-Residency MFA Program in Portland, Maine. His new novel, Vexation Lullaby, is published by Catapult.

The Time I Almost Died On the Appalachian Trail 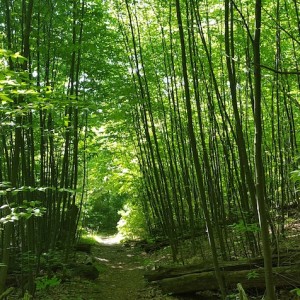 The Time I Almost Died On the Appalachian Trail

When I was 12 years old, my parents—realizing I wasn’t getting there on my own—bought me a collection of tiny books...
© LitHub
Back to top