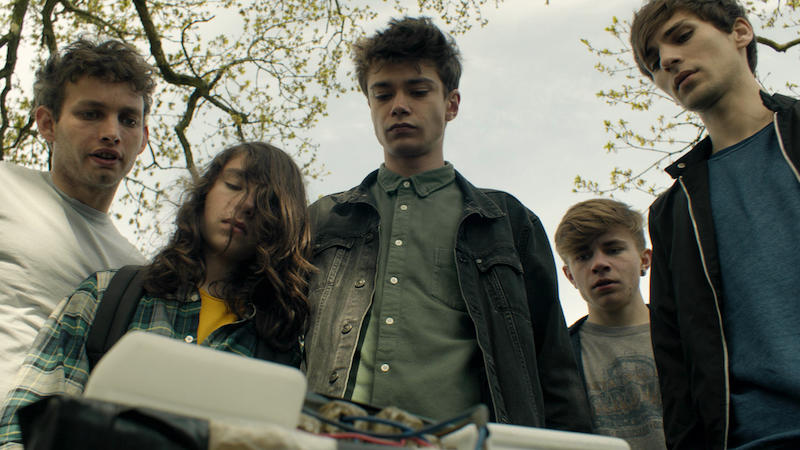 It’s rare for novelists to make the leap to becoming filmmakers, but Dennis Cooper has not only made the transition, his latest movie Permanent Green Light is one of the year’s best. It reworks his longtime themes of young people, intimacy, and violence to create an affecting story of friendship, trauma, and attempted transcendence.

Dennis Cooper is best known for critically acclaimed novels like his five book George Miles Cycle, Lambda Award-winner The Sluts, and The Marbled Swarm. Since relocating from Los Angeles to Paris in 2005, he’s actively explored other mediums. He has written nine theater pieces for director Gisèle Vienne that have toured the world. His innovative GIF novels have been shown in galleries and international art fairs, as well as featured on his remarkable daily blog, itself another art project.

Permanent Green Light is his second film, following 2015’s Like Cattle Towards Glow, both made with French visual and video artist Zac Farley. The story centers around Roman, a teenager obsessed with the idea of disappearing. He acquires a homemade bomb with the intention of blowing himself up—not as an act of violence, but as the ultimate magic trick. It’s a provocative conceit, though the movie itself is hushed and tender, following the connections that arise between Roman’s friends as they struggle to understand his project. With its unexpected plot turns and hypnotic tone, it’s the sort of unclassifiable art film that increasingly seems like an endangered species.

Both films were born out of the unusually close collaboration between Cooper and Farley. “There is no splitting of the duties,” Cooper says. “Zac and I are very likeminded. So, from coming up with the idea for the film, developing it, casting, rehearsing, shooting, editing . . . we do everything together equally. The only exceptions are in the script writing, where I, being a lifelong writer, do most of the work, although always with Zac’s continuing and thorough input on every detail, and in the directing. Zac has a strong visual sense and knows how to realize his visualization, whereas I have ideas about visuals but no natural gift or skill for how those ideas can be realized.”

It’s not surprising that one of Permanent Green Light’s most striking features is its use of dialogue. Where most contemporary movies treat dialogue as an afterthought, Cooper draws on his novelistic talents to craft revealing, emotionally complex, and slyly hilarious exchanges between the characters. “I think language might be the most important aspect of film,” he says, “or it’s where a great deal of film happens.”

“Dennis and I share an interest for this kind of subtle approach to performance,” Farley says.

Writing for Gisèle Vienne’s theater pieces has also shaped his approach to dialogue. “I’ve learned what it’s like to write for a particular person/body, to use the performer as an outline and to study a performer’s strengths, weaknesses, secret strengths and secret weaknesses, and then shape and fine tune the dialogue so the performer is as fully utilized and powered up as is possible.”

The film’s visuals also pull their weight. Shot in the suburbs of Cherbourg, France, the town’s nondescript architecture is carefully framed to create an ambiance of blankness and dislocation. That mood beautifully contrasts with the attention the camera lavishes on the characters. “One of the imperatives was to put the performers front and center, with little to distract from their faces,” Zac Farley says. “We worked with [cinematographer] Michael Salerno. He has a great sense of framing, very still and pure in a way that really brings a lot to the film.”

While Permanent Green Light mostly features non-actors with no previous film experience, the performances are exceptional across the board. Emotion plays out on the actors’ faces such subtle ways that they seem almost accidentally expressive. The effect is deeply moving.

“Dennis and I share an interest for this kind of subtle approach to performance,” Farley says. “It’s always somewhat embarrassing for me to watch actors that are almost violently trying to make the viewer feel something. When we work with performers, we’re very careful about asking them to develop a relationship—with the text, with their surroundings, with each other—that isn’t so much ‘acting’ but rather a kind of intense focus and presence.”

“We tried to be very careful and thoughtful in the casting,” Cooper adds. “We knew what kind of presence and what kinds of charisma we wanted the characters to have, so we were looking for that. Then it was mostly a matter of having them perform within a rather tight emotional register. When they exceeded it, it was because they felt what they were being asked to say and show made it emotionally necessary for them to break the boundaries. So that gave their performances a great sincerity.”

The film’s most powerful scene takes place toward the end when Roman’s friend Guillaume realizes that he truly intends to blow himself up. Filmed inside a car in a single take, the two performers navigate the emotionally charged conversation with devastating honesty.

Cooper says, “We needed that kind of focused, intimate relationship between the film and viewer to happen or the film wouldn’t work.”

“That’s my favorite scene,” Cooper says. “We had spent the entire day, a very long day, shooting the ‘river’ scene that proceeds the car scene. Benjamin Sulpice (‘Roman’) and  Sylvain Decloitre (‘Guillaume’) were very cold and very tired by the end of it. Then we had to immediately shoot the car scene. And that was tough also because it started pounding rain, and we had to wait for a long time for the rain stop, wipe the car dry, and then try to shoot the scene before the rain started up again. I think all of those conditions contributed to how amazing their performances were. They just nailed it at level beyond what we had even hoped. Tears were literally streaming down my face watching them. It was just one those inexplicably magic things. We had always intended for it to be one shot because it was very important that the scene felt completely authentic and driven by their performances without external manipulation. And we shot it entirely from that one angle, so there was no choice when it came time to edit but to let it run in total because any cuts would have been glaringly obvious.”

As the film builds toward its memorable finale, it becomes clear that Roman’s seemingly fanciful desire to disappear has deeply rooted origins. “It was important that the film very gradually revealed what was happening and that the viewer was asked to pay unusually close attention to what was happening and being said and revealed,” Cooper says. “We needed that kind of focused, intimate relationship between the film and viewer to happen or the film wouldn’t work.”

Critical reception to the film in France has been extremely positive and while it hasn’t garnered as much attention in the US, John Waters picked it as one of his favorite films of the year in Artforum and the cinema streaming platform Mubi made it a featured selection.

When writing about the movie, critics have frequently invoked French director Robert Bresson, who also employed non-actors in his films. While Cooper has cited Bresson as an inspiration for his fiction, he finds that influence on Permanent Green Light to be greatly overstated. “Critics always want to find points of comparison, visible influences, and I think that’s pretty lazy and unadventurous, but that’s the way films by ‘new’ voices are always initially characterized.”

Cooper and Farley have already written their next film, titled Room Temperature, which should make those comparisons obsolete. “Unlike in Permanent Green Light, where the setting was important but also a blank, the setting itself—a family turning their house into a ‘haunted house’ attraction—is very present to the point of being one of the main stars of the film,” Cooper says. “It will also require performances that are much more extroverted. The filming itself will need to be very physical and active, unlike PGL where the filming is very present but very still.”

“We’re striving to find a different way to work with sound and with music,” Farley adds. “In our previous film, we were really set on using music sparingly and almost exclusively diegetically, not wanting to take the risk of music acting as a kind of buffer, or worse, as an emotional cue. For this next project, we’re building the music into the structure of the film, it’ll get loud and intense.”

They’re excited that electronic musician Puce Mary has signed on to create the film’s immersive soundtrack. They are currently working with their French producer to raise money for the project, planning a similarly modest budget as Permanent Green Light.

While he’s energized about continuing to make films, Dennis Cooper hasn’t turned his back on fiction. He recently completed a new novel, his first since 2011’s The Marbled Swarm. Similar to the new movie, he’s made sure the novel is tackling fresh artistic problems and that he isn’t repeating himself.

“It’s pretty different from my earlier novels in a lot of ways,” he says. “It’s very personal and emotional and demanding in that sense. It’s very un-novel-like. It’s about my real relationship with George Miles, the namesake and muse of my five book cycle. It’s a bit hard to characterize. It’s called I Wished. We’ll see. I’m very into it, at least.”

Permanent Green Light can be streamed on Kanopy and iTunes. It’s also available on DVD and Blu-ray with extra features.

Jeff Jackson is the author of the acclaimed novels Destroy All Monsters (FSG Originals, 2018) and Mira Corpora (Two Dollar Radio, 2013). Seven of his plays have been produced in New York City.

On Finding Archipelagos of Beauty in the Eternal City 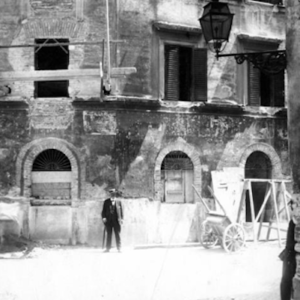 On Finding Archipelagos of Beauty in the Eternal City

What follows is a set of vignettes, or "islands," from the recently published book Islands—New Islands (Fontanella Press,...
© LitHub
Back to top