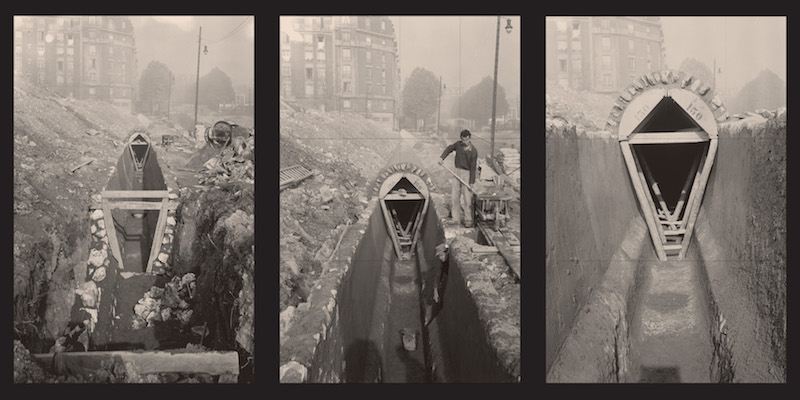 On (and In) The Sewers (and Sewage) That Transformed Paris

The Secret of a World Class City

The sewers of Paris have occupied an infamous place in the nation’s history and literature. In 1791, the Jacobin revolutionary Jean-Paul Marat sheltered in the sewers while fleeing from his enemies and it was probably in those fetid depths that he contracted or exacerbated the skin disease that required him to be immersed for much of his time in a medicinal bath (he would eventually be murdered in it by Charlotte Corday—the subject later of a famous painting by Jacques-Louis David).

And in Victor Hugo’s Les Misérables (1862), set in the period 1815–32, the principal protagonist, Jean Valjean, makes his escape from the villainous police inspector Javert through them, along with his wounded friend Marius. The cleaning of the sewers was sporadic and mostly dependent upon rainfall and sewermen equipped with rabots—poles 2 m (7 ft) long, with paddles at right angles, which were used to free accumulated sewage.

In December 1848, after the eighth such demonstration, Louis Napoleon was chosen as president of the French Republic promising stability, justice and prosperity for all. The disruptive tendencies of his fellow citizens did not pass unnoticed by the new president. They were to inform his ambitious plans for the reconstruction of the French capital, whose narrow streets and foul slums lent themselves to the construction of barricades and the breeding of discontent. Napoleon persuaded his fellow Frenchmen to grant him something approaching dictatorial powers which, alone, would guarantee the peace and which he deployed to reconstruct the French capital.

Louis had spent his early years in exile, some of it in England, where he came to admire London’s parks and the works of John Nash (1752–1835) in the creation of thoroughfares such as Regent Street. Louis envisaged the reconstruction of the French capital as part of his plan to perpetuate his rule. Narrow passages and alleyways would be replaced by broad boulevards suitable for the deployment of artillery and cavalry. Pure water would be brought from distant springs to replace the waters of the Seine into which the city’s waste was emptied. And finally, magnificent sewers beneath the streets would take the waste to a point downstream where it would no longer threaten the health of the populace.

Moreover, the unemployed masses who were the principal source of discontent would be usefully occupied in the reconstruction of the city. And the achievement was colossal. The English sanitary reformer Edwin Chadwick informed the Emperor, his host on a visit to the French capital, that his city was “fair above, foul below” and added: “It was said of Augustus that he found Rome brick and left it marble. May it be said of you that you found Paris stinking and left it sweet.”

To achieve his vision, the Emperor needed a public servant with the qualities to carry it out and he found him in the person of Georges-Eugène Haussmann (1809–91), prefect of Bordeaux, who had attracted the attention of Louis Napoleon during a visit to Bordeaux in his campaign to become ruler. He instructed Victor de Persigny (1808–72), his interior minister, to interview Haussmann. De Persigny recorded his impressions:

It was Monsieur Haussmann who impressed me the most. I had in front of me one of the most extraordinary men of our time; big, strong, vigorous, energetic, and at the same time clever and devious, with a spirit full of resources. I told him about the Paris works and offered to put him in charge.

It was an inspired choice. Haussmann, who was over 2 m (6 ft) tall, had the qualities that the job, and the Emperor, demanded and between 1853 and 1870 he executed Louis Napoleon’s vision. The boulevards were 20–40 m (66–132 ft) wide compared to the 1–2 m (3–7 ft) of the alleys they replaced, many of the thoroughfares radiating from grand squares such as the Place de l’Arc de Triomphe and the Place de la Bastille. Moreover, they were connected to the railway stations, so they would also enable troops to be brought swiftly into the city to subdue rioters.

In all, 418 km (260 miles) of new, broad streets replaced narrow warrens and passages. Some critics complained that the city of Honoré de Balzac and Victor Hugo had disappeared and in 1867, as Haussmann’s projects proceeded relentlessly, the historian Léon Halévy begged: “There will be a 20th century. Let us leave something for them to do!” But as long as he had the support of Napoleon III, Haussmann’s own determination was more than enough to face down his critics.

The unemployed masses who were the principal source of discontent would be usefully occupied in the reconstruction of the city.

Before he could execute the Emperor’s ambitious plans, however, he needed an engineer with the necessary technical expertise. Having created a new Service des égouts et eaux (“service of sewers and water”) in 1855 Haussmann’s choice fell upon Eugène Belgrand (1810–78), a graduate of the prestigious École Polytechnique and later of the École Nationale des Ponts et Chaussées, whose knowledge of geology and water management had impressed Haussmann in supplying water to the Burgundian town of Avallon.

Haussmann interviewed Belgrand and recorded: “I was astonished to find in this large, bald man, whose peasant exterior gave no hint of superior intelligence, a highly accomplished geologist and hydrologist.” Belgrand’s skills in water management were important because in the early stages of his work Haussmann’s main concern was the improvement of the water supply to Paris, whose rapidly expanding population was served mainly by supplies drawn from the Seine, into which the 142 km (88 miles) of existing sewers emptied much of their contents.

This mostly consisted of street garbage, horse droppings and urine, since solid human excrement was collected at night by teams of nightsoilmen (known as vidangeurs) and delivered to farmers or to foul-smelling dumps.

In the late 18th century, an idea had arisen that waste, including sewage, could be a source of wealth. The basic idea lay in the potential for sewage to be used as an exceptionally good fertilizer, which could be used to successfully increase the productivity of land. Various early proponents suggested ways in which this alchemy of gold from sewage could be achieved. French novelist Nicolas-Edme Restif (1734–1806) suggested that instead of Parisians dumping their waste in the Seine they could sell it to farmers to fund a public street-cleansing service.

Philosopher Pierre Leroux’s (1797–1871) “Circulus” theory proposed that the recycling of human waste would improve soil fertility so much as to allow the yield from the fields to easily keep pace with population growth. Moreover he suggested that “each would religiously gather his dung to give it to the state, that is to say the tax collector, in place of a tax.”

Fellow Channel Islands exile, Victor Hugo, visited Leroux and joined him as an advocate of the “Circulus.” His strong views on the matter even made it into Les Misérables where he wrote, in reference to Paris’s waste disposal via the Seine, that “Paris throws 25 million francs a year into the water. And this is no metaphor. We believe we are purging the city. We are weakening the population.” The wealth thus discarded “if used for welfare and for pleasures, would double the splendor of Paris. Its marvelous fete, its gold flowing from full hands, its splendor, its luxury, its magnificence, is its sewer.”

German chemist Justus von Liebig (1803–73) developed the idea further by identifying the importance of minerals such as potassium in plant nutrition, and on these grounds criticized the practice of dumping sewage into rivers and seas as a shocking waste of valuable fertilizer. In England the Revd Henry Moule (1801–80) devised a practical application of this concept with his 1850s invention of a “dry earth closet.” This consisted of a receptacle (such as a bucket) full of earth into which feces and urine were received and then buried under another layer of earth. This could be repeated until the receptacle was full at which point the contents could be emptied onto the owner’s garden as an effective fertilizer.

“Subterranean galleries are the internal organs of the great city and they function like those of the human body.”

Meanwhile, cholera epidemics were believed to be caused by a “miasma” of foul air arising from pollution and although this was not correct (water itself being the culprit) it was beginning to be appreciated that water drawn from a river as polluted as the Seine had become was, at the very least, unpalatable.

Belgrand built a series of aqueducts and conduits to bring drinking water from the river Dhuis, a sub-tributary of the Marne to the east of Paris, and the river Vanne to the south-east; to conserve this eau potable, the sullied waters of the Seine were used for street cleaning. To this day, the expressions eau potable and eau non potable are commonly seen in Paris and elsewhere in France. Having improved the water supply, Belgrand turned his attention to the infamous sewers of Paris.

Belgrand increased their mileage fourfold, to almost 800 km (497 miles), to deal with the extra flow emanating from the improved water supply. And Belgrand’s sewers were not like the narrow passages in which Marat had hidden. The smaller street sewers were egg-shaped, in accordance with the latest designs to concentrate and hence speed the movement of liquid at times of low flow, but at 2.3 m (7 ft 6 in.) high and 1.3 m (4 ft 3 in.) wide they were large enough for a man to stand comfortably to clear obstructions and execute repairs.

However, Belgrand is mostly remembered for his colossal “collector” sewers, which gathered the waste from street sewers and conveyed it to the Seine at Asnières—then just beyond the City boundary. In doing so, he took advantage of a bend in the Seine, so the outfall at Asnières was almost 8 km (5 miles) downstream from the center of Paris. Moreover, since the Seine through Paris is not tidal the flow of the river immediately conveyed the sewage downstream.

The scale and nature of these sewers was expressed by Haussmann in heroic language: “Subterranean galleries are the internal organs of the great city and they function like those of the human body . . . secretions are mysteriously performed and public health maintained without disturbing the running of the city or spoiling its beauty.” There were 11 of these main sewers, amounting to 64.3 km (40 miles) in length. The largest, the outfall to Asnières, is over 5 km (3 miles) long and measures 4.3 m (14 ft) high and 5.5 m (18 ft) wide—more than four times the capacity of the sewers that were being constructed at the same time by Joseph Bazalgette in London, a much larger city.

A narrow channel in the bottom of the sewer is itself 3.5 m (11 ft 5 in.) wide by 1.35 m (4 ft 5 in.) deep. The sewer was completed in 1859. A siphon conveyed the sewage from the collectors on the Left Bank and added it to that of the Right Bank so that it could all be taken to the Asnières outfall. The siphon, near the Pont d’Alma, consisted of two sealed iron tubes, 150 m (492 ft) long, which were lowered into the Seine attached to iron weights. The river was closed to traffic for a week while this was done. This was not a popular move, but the authority of the Emperor made it possible. 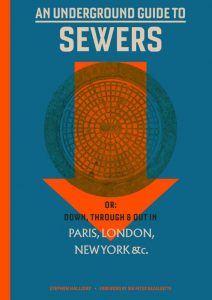 Excerpt from An Underground Guide to Sewers or: Down, Through, and Out in Paris, London, New York, &c. by Stephen Halliday, © 2019 Thames & Hudson Ltd, London. Published by arrangement with Thames & Hudson, Ltd., London, by the MIT Press.

Stephen Halliday is the author of Water: A Turbulent History, Amazing and Extraordinary London Underground Facts, and The Great Stink: Sir Joseph Bazalgette and the Cleansing of the Victorian Metropolis. 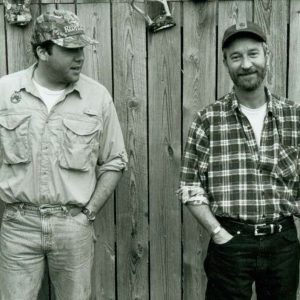 Larry hated me telling this story. But Larry also understood that the most natural place to begin is at the beginning, and this...
© LitHub
Back to top
Loading Comments...