A 19th-Century Vision of Black and Native American Resistance

In his discussion of the postbellum prospects for “abolition democracy” in Black Reconstruction, W.E.B. Du Bois credits Thaddeus Stevens, the white Radical Republican congressman from Pennsylvania, with prophetic vision, referring to him as a “seer.” He cites Stevens’s plan to confiscate and redistribute the assets of the planter class, laid out in a speech at Lancaster, Pennsylvania, on September 6th, 1865. At the end of the summer after the surrender at Appomattox, the total wealth of the Confederacy might have become the economic base of a new social organization:

There are about 6 million of freedmen in the South. The number of acres of land is 465,000,000. Of this those who own above 200 acres each number about 70,000 persons, holding in aggregate—together with the States—about 394,000,000 acres, leaving for all the others below 200 each about 71,000,000 acres. By thus forfeiting the estates of the leading rebels the government would have 394,000,000 of acres, besides their town property, and yet nine-tenths of the people would remain untouched.

Stevens’s calculations elaborate on General Sherman’s “Special Field Orders No. 15,” which sought to divide 400,000 acres of Southern territory along the coastline between Florida and South Carolina among freed people in parcels of 40 acres each. For Du Bois, Northern leaders’ refusal to take plans like this seriously allowed what he called “the counter-revolution of property” and the retrenchment of white supremacy in the decades after Reconstruction.

Stevens’s plan for the South did not come to pass, of course, and neither did other abolitionist proposals focused on land ownership for the recently freed. The radicals’ grand plans for land redistribution, however, did parallel the settlement of the West over these same years. Horace Greeley’s 1854 prescription, that “The public lands are the great regulator of the relations between Labor and Capital, the safety valve of our industrial and social engine,” had come to justify the federal dispossession of Native land and its sale to white settlers and railroad corporations via the Homestead Acts in 1862 and 1866.

Early 20th-century literary historian Vernon Parrington described this process as “the Great Barbecue,” noting the “inconspicuous persons” who had not received invitations. Among these were the freed people. In lieu of real reparations, the rhetoric of possessive individualism came to disguise the usurious and exploitative debt-peonage arrangements that defined the economics of Black life in the New South.

The premise of Black yeomanry became an important ideological mechanism for the management of Black people, especially in the South but also in the West, in the decades after the war. The industrialization and incorporation of the American West had made the Jeffersonian fantasy of a continent of small freeholders untenable, while the entrapment of newly freed African Americans in profitless relation to agricultural production succeeded only in remaking the planter class as rentier elites.

Literary critic Houston Baker sums up African Americans’ alienation from the frontier myth and the yeoman ideal: “Tales of pioneers enduring the hardships of the West for the promise of immense wealth are not the tales of black America.” This categorical claim does not, however, mean that Black people had no frontier myths of their own. Greeley’s safety valve may not have liberated Black people, but the spatial facts of North America still generated alternative forms of Black romance. Melvin Dixon contends that during slavery, “the wilderness” functioned “as a place of refuge beyond the restricted world of the plantation.”

After the war, African Americans formulated a range of visions of the American landscape, the West, and the frontier that suggest they saw in its vastness some hope of reprieve. The Black Romantic poets, as they reckoned the problem of slavery in the middle decades of the century, played a key role in articulating African Americans’ relation to New World spaces, places, and homelands.

Some, like James Monroe Whitfield and James Madison Bell, moved to California during the war, and looked directly on the foreshortened prospects for Black people at the culmination of Manifest Destiny. Others, like George Moses Horton and Martin Delany, imagined emigrationist or colonizationist pastorals beyond the reach of US territory, which nonetheless eerily recapitulate settler/planter understandings of land and nature.

In the middle of these contradictions around Black relations to the land as the mythic basis of US national identity, the most popular African American poet in the wake of Reconstruction, Albery Allson Whitman, wrote vast lyric epic romances about frontier history in which Black and Native characters take center stage. Whitman was unique among his contemporaries in considering Indigenous communities and experiences at length, and this perspective led him to what can best be described as an impossibly radical depiction of American life.

Whitman’s most creative period, during which he came to be known as the “Poet Laureate of the Negro Race,” overlaps with a catastrophic phase in both African-American history (from the Compromise of 1877 to Plessy v. Fergusonin 1896) and Native American history (from the Great Sioux War of the late 1870s through the Dawes Act of 1887 and Wounded Knee in 1890). His two most important long poems project the brutal disappointments of this moment back onto scenes of colonial violence that took place some 50 years before their publication.

Not a Man, and Yet a Man (1877) focuses on the Blackhawk War (1830–32), while The Rape of Florida (1884, reprinted as Twasinta’s Seminoles [1885]) represents the First and Second Seminole Wars (1816–18, 1835–42). In these vast and richly aestheticized romances, Whitman puts Jacksonian historical subjects and antiquated poetic forms to the service of an aesthetic critique of postbellum colonialism, racism, and capitalism.

Because of their length, subject matter, and rhetorical complexity, these works did not have the obvious activist utility of the short lyrics of Francis Ellen Watkins Harper or Joshua McCarter Simpson. However, Whitman was deeply involved, through the African Methodist Episcopal Church, in post-Reconstruction Black community-building across the South and Midwest. He saw his poetry as an extension of revolutionary abolition.

The romance as an American form had long worked through the cultural norms of US frontier life and the contradictions of settler colonialism. Whitman’s romances linked slavery to Native American genocide, and thus the onset of segregation to the reservation system, and led him to apocalyptic conclusions about postbellum reunification and the consummation of Manifest Destiny. The historical dissonance of his formal choices made for an insurrectionary response to the end of Reconstruction.

In mid-19th-century America, historical romances had made the violence of settlement a literary tradition to rival the national histories of Europe. In its more deluded and self-aggrandizing forms, the antebellum historical romance justified the brutality of planter aristocracy. Mark Twain diagnosed the South and especially the Confederacy with what he called “the Sir Walter disease”; he finds its “jejune romanticism of an absurd past … in great measure responsible for the war.”

Whitman’s historical romances do not suffer from the disorientation of an entrenched elite; instead, they depict moments of interethnic resistance on the antebellum frontier in protest of Jim Crow social policy. This gesture to moments of Black and Native anticolonial struggle recalled to Whitman’s audiences the role of Western lands in exacerbating the conflict around slavery, and to collaborations between abolitionists and activists against Indian removal.

The concatenation of antiquated forms and subjects in his work queries narratives of civilizational progress; the echo between border wars of the ante- and postbellum calls attention to white supremacy’s reinvented dominion over people of color after the end of slavery.

The historical romance in the US context had long focused on the ways captivity and sexual violence result from territorial disputes. Whitman sets this preoccupation of the genre against the ideals of character that drove racial uplift. In his compulsive digressions from the complex plots of his epics, Whitman poses aesthetic and ideological challenges to uplift, shading in the contrast between sexual violence as a historical fact of settler slavery and sexual “hygiene” as a mode of social control in emergent industrial society.

He rewrites the frontier myth to center the opposition between white rapacity and anticolonial love. His experimentation with narratives of Black and Native collaboration contradicts the seeming inevitability of US empire’s consolidation, forcing the question of nonwhite futurities inside, outside, and along its borders. The vertiginous movement of his work between historical pasts and the tumultuous present, as well as between the vast machinations of empire and its intimate effects, made him the most popular African-American poet of the 1870s and ’80s. 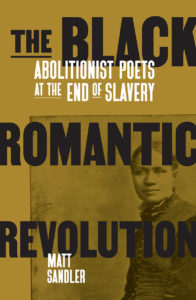 From The Black Romantic Revolution: Abolitionist Poets at the End of Slavery by Matt Sandler. Used with permission of the publisher, Verso Books. Copyright © 2020 by Matt Sandler.

Matt Sandler is Program Director of the M.A. in American Studies at Columbia University's Center for the Study of Ethnicity and Race. He specializes in American and African American poetry. Before returning to Columbia, he taught at Louisiana State University, Gettysburg College, and the University of Oregon. His work has appeared in Callaloo, African American Review, Comparative Literature, Twentieth Century Literature, Atlantic Studies, the Journal of American Studies, and the L.A. Review of Books, as well as a number of anthologies. 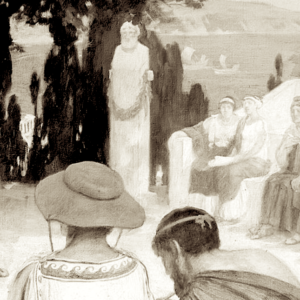 In 1934, in curious approximation of a correspondence between Sigmund Freud and Albert Einstein, titled, “Why War?,”...
© LitHub
Back to top
Loading Comments...