Notes on Your Sudden Disappearance 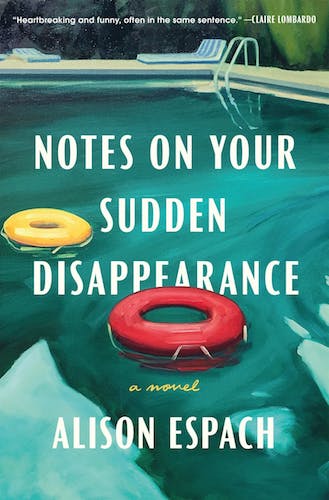 The following is excerpted from Alison Espach's new novel, Notes on Your Sudden Disappearance. Espach is the author of the novel The Adults, a New York Times Editors' Choice and a Barnes & Noble Discover pick. Her short stories and essays have appeared in Vogue, Joyland, Glamour, Salon, and McSweeney's, among other places. She is currently a professor of creative writing at Providence College in Rhode Island.

Six weeks later, you were dead. I’m sorry if that seems sudden to you, but that’s what it felt like to me. That’s what it still feels like even now, fifteen years later. Like, poof! Sally, your sister is dead! Now, go to church.

There was no warning. No premonition. Not at all like the movies, where the sister always feels the bad thing that is about to happen. The sister notices a crooked painting on the wall or feels a chill up her spine or wakes in the middle of the night with a terrible feeling in her chest and clutches whoever is sitting next to her and says, Glen, something is wrong with my sister, and somehow Glen can feel it, too.

But I felt nothing. I thought it was just going to be another one of those school nights when nothing happened, when we did our homework and then ate dinner and then went upstairs to pick out our outfits for school in the morning.

But after dinner, when I went upstairs, I found you already in the bathroom brushing your teeth.

“Why are you brushing your teeth?” I asked. It was too early— normally, we didn’t brush our teeth until just before bed.

I looked at the foam building in your mouth, and I thought, for a second, you might try to speak. I thought we might laugh the way we used to. But you were sensible. You spit in the sink, put your brush back on the holder, and said, “How’s my breath?”

“I’m going out tonight with Billy.”

“Going out?” I asked. I followed you into our bedroom. “You can’t go out with Billy.”

School nights were sacred. The only nights when I was certain I would get to spend time with you.

“So?” you said. “Almost all nights are school nights. Statistically speaking, it means none of them can actually be that important.”

This is what was important: Billy’s semifinal game that night against Dalton. “Dalton, Sally!” you said, like it meant something to you, but I couldn’t imagine what. “If they win, they have a chance at being state champs,” you said.

“Mom actually said you can go?”

It was rare for Mom to break her own rules. Mom ran a tight ship, which is something she liked to say a lot, just before she looked to Dad for confirmation about something. “What do you think? Richard?” And then Dad would take a sip of his beer. Dad didn’t normally make the rules, but he had the power to veto them. Once canceled a trip to Hershey Park because we lied about cleaning our room.

“They said it was fine,” you said, with less enthusiasm than I expected, as though you had negotiated a successful business deal with them. “I’m sixteen. I can do what I want. Why don’t you mind your own business?”

You leaned close to our bedroom mirror to apply Mom’s lipstick. Then, you blotted your lips with a tissue, which was something I had only ever seen Mom do, in the car, before we headed into the grocery store or the mall. A familiar gesture, but watching you do it gave me that strange feeling again, the same feeling I had earlier that morning before school when you leaned into Billy at our kitchen counter and said, “Congratulations, baby,” because Billy showed us the 60 he got on his Global Civ quiz. And I was confused. When did you start calling him “baby”? And since when was 60 a good grade? I would have cried if I got a 60, even on a quiz, but Billy was pleased. All Billy needed was a passing grade, he said, because he had gotten into college that week—a scholarship to play ball at Villanova. But you were only a junior. You still needed to get As on your quizzes and tests, if you wanted to get into Villanova and join Billy one day.

“Sally, I need you to take notes on the State of the Union for me while I’m gone,” you said, pulling away from the mirror. And suddenly, just like that, you were Kathy again. My sister, who always needed something from me, and what a relief. “There’s going to be a quiz on it in history first thing in the morning.”

Though I admit, I would have liked it to be something bigger than that. Something involving your boyfriend.

“What’s the State of the Union have to do with history, though?” I asked. “It hasn’t even happened yet.”

“But it will happen,” you said. “One day, it will be history. You don’t know what’s history as it’s happening. That’s what Mrs. Klausterman said.”

You leaned forward to sweep shadow across your lid.

“Just write down everything that sounds important,” you said.

“But how do I know what’s important?”

This had been a problem for me lately. Everything I thought was important was turning out not to be important. Like school nights. Like the myth of Philomela, which I had taken two pages of notes on because Mrs. Framer had talked about it for nearly twenty minutes, and then it wasn’t even on the test.

But you weren’t concerned. “You’ll figure it out,” you said to me. “You’re smart.”

You plucked two gold hoop earrings from your jewelry box—real gold, a Christmas gift from Billy. As you slid one through your ear, I picked up the other.

I was surprised by how heavy it was. It felt real in my hand, like the weight of the world you were about to enter with Billy. I couldn’t bear the thought: soon, Billy would be at college, and then a year later, you would join him. And what would happen to me? “I can’t believe Billy is going to college next year,” I said.

“Because,” I said, “he doesn’t even know who Socrates is.”

“What does that have to do with anything?” you asked. “It just seems like if you’re going to college, you should know who Socrates is.”

“What, is that some kind of admissions test? You think the basketball coach cares about that? Is that how you’re going to pick a husband?”

You looked back at yourself in the mirror.

“I take you, Billy, to be my husband, for richer or poorer, in sickness and health,” you said, dramatically to yourself. “Assuming you know who Socrates is, of course.”

I laughed. I swallowed. “Are you going to marry Billy?” I asked. You were too young to get married. But you had already done things with Billy that I couldn’t have ever imagined you doing, and so what did I know?

“Maybe,” you said. “Now give me the other earring.”

You started to slide in the other gold earring when the doorbell rang. Your hand shook, as if you could feel whatever your boyfriend did with his hands, and you dropped it on the desk.

“Tell Billy I’ll be down in a minute,” you said. “Oh, and Sally, don’t tell Mom and Dad you’re taking notes for me. Mom won’t let me go out if she knows I’ve got homework to do.”

I didn’t like lying to Mom. Mom always knew. Mom said that lies showed up as white spots on our fingernails. Mom made us put our hands on the table whenever she suspected we were lying, and, of course, we always had a ton of white spots on our nails. We confessed—yes, we were watching Jillian Williams. Yes, we were making prank phone calls. Sorry, Mom, so sorry, but apologies were never enough. “Up to your room,” she would say, “and don’t come out until you’re ready to respect the truth.”

But I was willing to risk it that night. I loved keeping your secrets more than anything. It was the only thing that made me feel like I was still your sister.

“I won’t tell anyone,” I said, and then ran down the stairs, so excited to greet Billy.

Her Hidden Genius by Marie Benedict, Read by Nicola Barber 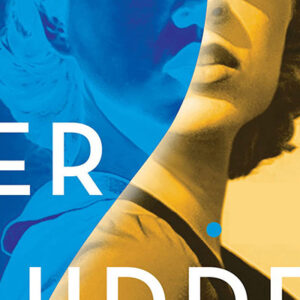 Her Hidden Genius by Marie Benedict, Read by Nicola Barber Every Monday through Friday, AudioFile’s editors recommend the best in audiobook listening. We keep our daily episodes...
© LitHub
Back to top