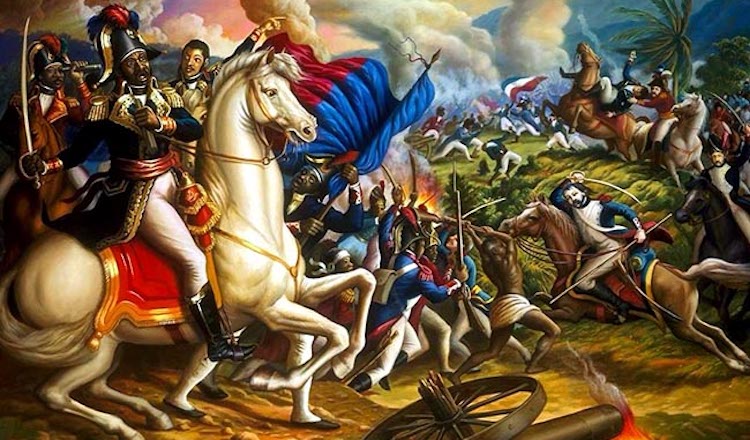 In 2010, one day after a cataclysmic earthquake tore through Haiti, killing over 100,000 people, the American evangelist Pat Robertson decided it was finally time to put Haiti in its place. The catastrophe, he said, smiling with a remarkable resemblance to a devil from a medieval manuscript, “happened a long time ago in Haiti, and people might not want to talk about it.” Robertson then began to delve into Haiti’s history as the first all-black republic in the Americas since the advent of European colonialism. Haiti had famously overthrown its French colonial oppressors and declared independence in 1804, an extraordinary, epochal move memorialized in texts like C.L.R. James’ magisterial study from 1938, The Black Jacobins, and Alejo Carpentier’s baroque 1949 novella, The Kingdom of This World, amongst others. In Claude McKay’s Home to Harlem (1928), the first African-American bestseller, McKay’s protagonist begins to admire the little-taught histories of black liberation and leadership when a Haitian acquaintance tells him about the Revolution. Robertson, however, was not praising the Haitian Revolution; instead, he claimed, the earthquake was the Haitians’ fault.

The enslaved Haitians “were under the heel of the French,” he said in his signature coffin-creak voice. “You know, Napoleon III and whatever. And they got together and swore a pact to the devil. They said, ‘We will serve you if you will get us free from the French.’ True story. And so, the devil said, ‘OK, it’s a deal.'” At the time, I only knew as much as my Social Studies classes had taught me about Haiti, though I had learnt enough about the horrors of Hispaniola’s slavery and the uniqueness of the Haitian Revolution to know that the evangelist’s fiendish words were wrong. Aside from the dubious historicity of the Devil having signed any legislation or his reference to Napoleon III (who had not, in fact, even been born at the time), Robertson’s remarks fit into an old, ugly history of attacking Haiti—as well as the Caribbean more broadly, though Haiti has frequently been the most cruelly smeared. His remarks were at once extraordinary and banal, channeling a refrain I had heard growing up all too often: we are nothing, forgotten worlds rotting away like the dreams of polluted swamps, and when bad things happen, big white countries will briefly remember and blame us, then forget we exist, again.

“The earth / Has grown weary with too much blood,” Kwame Dawes wrote in “The Glory Has Left the Temple”; for a certain kind of American, it seemed, some of us deserved to die in our terrible nations, deserved to thicken the blood in the soils, and they would smile condescendingly if we did.

I thought of Robertson’s gaslighting comments again in 2018 when Donald Trump allegedly described Haiti and a number of African nations as “shithole” (or “shithouse,” according to certain Republican senators) countries that the United States should not encourage immigration from. Instead, the President argued, America should let in more people from places like Norway. Unlikely coincidentally, the “shithole countries” he chose were majority-black, while the good nation, Norway, was majority-white.

When I was a child, my mother lamented me growing up in Dominica rather than in the United States. She, like so many others in our archipelago, had internalized the idea that there was no real future to be had in our islands; America, England, Canada, or Europe, broadly, were the places to be. There was an obvious coloniality in her attitude—she had been born in Dominica and attended a convent in Grenada with her sisters while both islands were still British colonies, and she had always had a soft spot in her heart for England, where she had gone for some of her later schooling. Yet underlying it was something else, too: a defeatist sense that our islands just weren’t anything special. That we should aspire to leave them rather than raise new children in them, and, if the latter had to be, the children should escape.

Not all Dominicans thought like this, and Dominica, like the region at large, had produced brilliant luminaries, like our renowned local historian, Lennox Honychurch; the writer Jean Rhys; or Dominican playwright and litterateur, Alwin Bully. Yet many, myself included, did want to leave for school and to seek better professional opportunities, contributing to the brain drain that has plagued our islands. Rhys, our best-known author, of course, also left. (In one vision of my future before coming out made returning home utterly unfeasible, I planned to return to Dominica to create a writing workshop, something we rarely see outside our annual literary festival, which I had also been on the planning committee for.)

In so much of my upbringing and, later, in my reading of West-Indian literature, I saw this attitude of quiet resignation, this lugubrious idea that we would never be as good as bigger nations. We were, to many eyes, broken reflections of our Mother Countries, even as that image was at once simplistic and naïve, assuming that we should even aspire to be like the ones we had torn free from. We were insulted, it appeared, for the audacity of wanting independence from our white colonial slaveholders and rulers. (Dominica was notable in its independence, as it became a true republic without the queen at its head, though we are still part of the Commonwealth; that we are a republic only makes the unrelated Dominican Republic’s name more flummoxingly similar.)

The saddest thing was how many of us took such self-loathing as the truth. We dreamt big, yet we were consigned, simultaneously, to the idea that the moon-crater potholes in the roads would never really be fixed, that the prime minister would always be a corrupt clownish racketeer out of a tropical opéra bouffe, that we would always be mistaken for the Dominican Republic no matter how many centuries separate the names of our countries, that the fogs surrounding us would never diminish and so we would never, really, be known beyond our shores except in occasional tourist brochures and travel essays and film backgrounds.

When the cast of Pirates of the Caribbean: Dead Man’s Chest began to film near the primeval mangroves of the greendark Indian River in the early 2000s, my father returned home one day with t-shirts and a grin. Doctors of the Caribbean, the official shirts read above a skull with a vanitas grin from a 17th

-century still life made into the movies’ logo. The white shirts had been made for the medical university my father lectured at, which was not far from the Indian River, and though my tee was too large, I wore it with silly pride. An eye doctor in town gushed like a little girl that Johnny Depp had come into her office to be treated. This will put us on the map, some Dominicans insisted, with the same ingenuous faith that we approach so many things with, even while that resignation towards stagnation and failure bubbles and then slowly congeals and hardens inside us, like a seed. (Soon, many people apparently forgot that Pirates of the Caribbean had ever been partly filmed in Dominica, and, as Google’s suggested searches reveal, were looking for that Pirates movie set in the Dominican Republic; we had slipped behind the haze, again.)

I am accustomed to Americans not even knowing my island exists, much less respecting it. Even in the wake of Hurricane Maria, the chthonic storm that destroyed my former home and left many Dominicans, to this day, without electricity or running water, I am still seeing people lamenting the Dominican Republic—which was also hit, but not as badly—rather than Dominica in comments under articles about Dominica, or even in comments to me.

Even after Hurricane Maria, people forgot us.

That my island was ravaged only months before Trump’s shithole comments by that monstrous tempest, that storm vaster and less restrained in its anger than the biblical Angel of Death, was indeed ravaged alongside the devastations wrought by Hurricanes Maria and Irma in Anguilla, Puerto Rico, and elsewhere, only added insult to injury.

Because Trump didn’t just mean Haiti—he meant the rest of us, too, if you read between the lines, as his fervent supporters always refuse to. This condescending dismissal, echoing the way the earliest European colonists pictured our islands as sites of feverish disease, laziness, debauchery, and a lack of civilization—white European conceptions thereof, as the Caribs and the last of the Arawaks were already there when the Europeans arrived. This condescension from a president so unpresidential that he gave a perfect score to his lackluster relief efforts, echoing the very superlative propaganda of the North Korean leader he so professes to despise, yet mirrors in many ways. A man whose treatment of Puerto Rico is criminally pathetic. To be sure, helping after a hurricane is not easy, can feel Sisyphean. But what Trump did in our region was a hint of the way he would later describe Haiti: we weren’t really worth anything.

That non-American islands like mine hit by a hurricane are now almost forgotten after an initial flux of relief feels depressing and hurtful, if unsurprisingly so.

If you’re not careful, you begin to internalize all this into thick, rough self-loathing. Begin to feel it having taken root in you like a little sooty flower, which reddens and bulges the longer you let it grow—taken root, not take, because it has already begun without you even realizing it, and it’s only when you find yourself dismissing your home, too, that you see what has happened. You learn, in other words, to believe you are shit. It becomes a quiet mantra, a thing that brushes against your insides. It becomes dense, homiletic. You feel small, like the title of Jamaica Kincaid’s famous jeremiad, like nothing you people does matters.

For all the president’s stupidity, depravity, bigotry, insecurity, and dotage, his crass rhetoric, which tangentially applied to your own country despite not being specifically mentioned, starts to seem true. You begin to let yourself be taken over, as the president has, by a rotten, rotting set of ideas and insecurities. You begin, even, to let a zealot like Robertson—who ascribes most disasters to God’s punishment but who also frequently targets people of color as deserving of divine wrath—sound rational because you have come to believe you are small, irrelevant, a shithouse inhabitant.

I’m tired of this rhetoric.

At the end of the day, the true shithole country is the one envisioned by Trumpism. America was not great before him, and is far sadder in his wake, but it still contains a grandeur in spirit worth fighting for. And so do the countries the president, who recently admitted his surprise at the number of nations in the world, dismisses. “Love is earth’s mission / despite the massed dead,” the Jamaican poet Anthony McNeill wrote in Chinese Lanterns from the Blue Child in perhaps his most quoted of poems. I still want to believe that, even as I know, rationally, the universe cares nothing for brief-blown specks like us. Instead, it’s up to us to care, to refuse to let arrogant, myopic, neo-colonial buffoons, like this president, presume to speak for worlds whose beauty and brilliance, whose artists’ diverse, dangerous creations, to paraphrase Edwidge Danticat, he will likely never be able to see.

Gabrielle Bellot is a staff writer for Literary Hub. Her work has appeared in The New York Times, The Atlantic, The New York Review of Books, The New Yorker, The Paris Review Daily, The Cut, Tin House, The Guardian, Guernica, The Normal School, The Poetry Foundation, Lambda Literary, and many other places. She is working on her first novel. 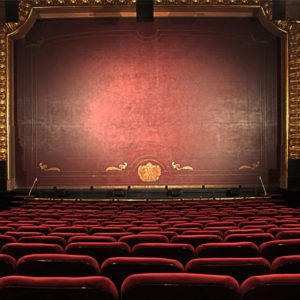 A play is a story that happens. It’s here—this moment, this accretion of moments onstage—before it’s gone. I prefer...
© LitHub
Back to top