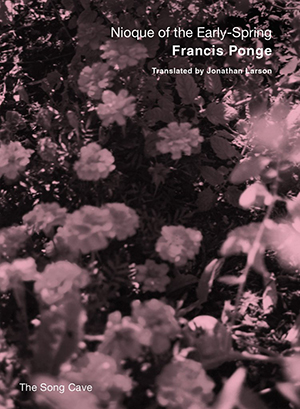 The following is from Francis Ponge's notebook, Nioque of the Early-Spring. Published for the first time in English on the book's 50th anniversary, Nioque of the Early-Spring is an homage to the season and meditation on the cycle of time. Francis Ponge (1899–1988) was literary and artistic director of the communist weekly newspaper L'Action. His books include The Voice of Things and The Making of the Prairie.

Proem of the Same Day

At every instant to have lost, to have to refind one’s vocabulary, to have to start over from the most common vocabulary, crude, down to earth, from the lack of vocabulary, nearly absolute, of farmers, of workers, of their badges, muddy, earthen blunder: look at what is good! Good sign. A chance.

(Not merely the vocabulary of the hay dock, but the lack of vocabulary.)

Like never-ending rain, the inclement weather brings decay, it deteriorates rustic houses, one must redress (repair) this or soon suffer collapse. Look at what is good. Good sign. This struggle, this elementary inclement weather. Rain, which damages, which brings walls to collapse, which rots the wood but also washes, that is healthy. Struggling with that, that is good. There is need for a constant reinvention; of the solid, of the good, of the roughly constituted.

So, one restarts to clear the throat or gullet, of pebbles, of the piles of pebbles in the road, of the earth and the water of the streams (that come from the rains).

As there are piles of pebbles collected in places to regravel the roads, surely there are words. One must go and search for them. In the gullet, in the gullet of others, in books, in dictionaries. By the shovelful, in scraping the graveling.

Countryside, encumbering solitude. It must be said that I sleep a lot, do not talk much, am rather grumbly, surly. No ideas, no readings, a real wild child. And that I cumber my body like an old tree-trunk of gnarled meat, of indigestible things at times, that I have plenty of mucus, catarrh, not the body that is unduly liberated, the spirit so numb and misty and dripping that it suddenly suns itself. That, that is good.

And the idea of death, the possibility of dying (from a gust of wind) at every instant that sweeps across me. That, that is good, too.

I like these large sooted knots, these expressions of knotted trunks, bundles of wet (soaked) firewood, large sooted knots under a grey silken sky (a little blue, made blue), and this untidying, these face-slaps of inclement weather (by the elements) in solitude.

The bistre darkens more and more, almost to black, from which the tender green suddenly suddenly surges (and even, at first, for the hawthorns, the white), then all the colors in imitation of the mineral.

It is from the branchlets, from the nearly black reglets that the green and the white surge up.

From Nioque of the Early-Spring. Used with permission of The Song Cave. Copyright © 2018 by Francis Ponge.

Jeff Hobbs on Telling the Story of Your Murdered Friend 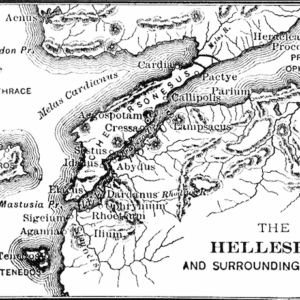 Lit Hub Daily: May 3, 2018 If it works for chickens… How a Coney Island sideshow kept thousands of premature babies alive. | Lit Hub Meghan...
© LitHub
Back to top