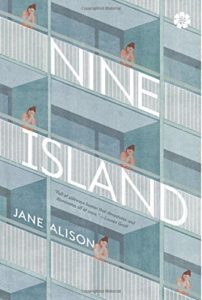 The following is from Jane Alison’s, Nine Island. Alison is the author of a memoir, The Sisters Antipodes, and three novels—The Love-Artist, The Marriage of the Sea, and Natives and Exotics—and the translator of Ovid's stories of sexual transformation, Change Me. She is Professor and Director of Creative Writing at the University of Virginia, and lives in Charlottesville.

So I’ve sailed the seas and come to—

No. I’ve sailed no seas. I’ve driven south down I-95, driven south for days, until 95 stopped and I was back in Miami.

No country for old women.

I’m not old yet, but my heart is sick with old desire, and I’m back in this place of sensual music to see if it’s time to retire from love.

What a delight to be free of that maddening monster, lust!

I’d just spent a month with you, Sir Gold, up where 95 starts. After thirty years since I’d seen you last, thirty years of disaster with men, one day you dropped from the sky to my in-box. Your name there I looked at a very long time.

Ahoy! you finally said when I clicked.

First we had a yearlong exchange of pictures and words. Then I flew up for a week of ceviche, strolls through hydrangeas, Greek pots. Then you asked me to come again and stay awhile in your stone house on a hill.

These words I looked at a long time, too. Bring Ovid! you said. Bring the cat.

Are you here yet? you said, when I’d just started driving.

You smoked me a trout, yanked armfuls of greens out of your ground, made me a tarte tatin. You even filled your swimming pool just so I could swim!

Gazing down at the naked older me, you murmured, Look at that.

Later you said, Isn’t this funny, after so many years. Come closer, you murmured in the dark.

And in the morning: happy whistling as you strode over wet grass with the dog, then bounded back to me still in bed.

I thought, Could it be? Happy end?

But when the month was done—well, who knows. Your hazel- green eyes went pained, and you decided it best to stay as you were, just the dog, the stone house, the hill.

Thanks for coming up, though!

I ramped onto 95 south thinking, Really ought to give up on all this.

But give up on what, exactly, I have to ask myself. Has it not been decades of comical disaster? Should be good to give up on disaster.

I stopped near Annapolis to see my mother. She is a lady who’s sailed the seas of love, all the way from Australia. She’s had a long career in men, trailing me along through husbands, then boyfriends, then the species of men who vanish by daybreak, until finally the seas dried up and she landed alone. She knows all about my wandering. Erring, as she calls it.

You, too? she said to me once. Oh, my darling dear.

When I parked outside her house in Woods Landing, she came to the door and wavered, silky as ash: she wobbles and lists even sitting. Loss of labyrinthine function, doctors say, a phrase that has bewitched us. She insists it isn’t dizziness; the horizon just started tilting one day, and she can’t get it to stop.

I came in and watched her lurch and careen from wall to fridge, then tumble into a chair, surrounded by her carved and painted birds, clutching the table for safety.

Look at you! I said to her. This has to end. You need a plan. Do you hear me? A plan for where to live next. It’s time.

She tossed her head and glanced away. Let’s not talk about me, she said. Let’s talk about you, bossy girl. How’d it go?

Meaning the month. She’d heard about Sir Gold three decades ago, when he first broke my heart. Then much, much more about him this year, when it all seemed so hopeful again.

I shook my head.

She pondered me. After a moment, sighed.

Well, she said, placing her spotted hand on mine. Well, well. Maybe, darling, you should give up on all that. Maybe it’s just time.

Got back in the car and drove blurrily south.

From Annapolis down around D.C., through Virginia, North Car- olina, South. Trees changed from oaks to loblollies to palmettos among pines as the sun freckled my hands, mottled my chest. Buster was with me, have I said that? Buster, my darling, the only real one. Skinny and black with a white spot on his nose, almost entirely blind and deaf, paws flailing for knowledge.

Three decades of wandering among men. I have to ask myself, For what? Who made them the trees, the stars?

Boys at seven running after you and knocking you down, sticky lips all over your face. Boys in alleys, on sand dunes, in cars; boys on tables, on stairs, in closets. Skinny blond painter with fish eyes I lived with awhile, tall architect with an eclipse in one eye and long hands that shook. The one I married and stayed with for years . . . Then the wretched end of that and it was back to the start: a heat- seeking tour of old boyfriends. Who knew? Might be something I’d missed. Wrote to old boyfriends from decades before—college, high school, one from fifth grade—the kind that really know you and send messages back that fill you with hope. Have thought about you often! Would love to see you. Come! The tour took me up and down I-95, involved lots of nervous drinking and ruinous sex, but one old boyfriend after another in flesh was not what he’d been in ether, and not at all what he’d been before. First was Lurch, then Mick, Sad Eyes, the Devil. But they turned out even more errant than me: girlfriends or wives kept secret in pockets, vessels broken on once noble noses, gazing into glasses of gin.

And this was when Sir Gold appeared, drifting back into my life like a cloud.

Just halfway along the footpath of life

In Georgia I stopped at a hotel with walls made of oyster shells jammed in concrete, and in its saloon I ate shrimp and grits and drank too much wine for a woman alone, helplessly checking for messages. Someone—you—saying, Come back!

Such a sickness, wanting. No end?

After the hotel of shells came the zone of orange groves. I’m skipping the miles of spattered asphalt, turtles pondering on the side of the road, gas stations, Waffle Houses, outlets for cigarettes or perfume, trucks with no qualms about blasting my Mini to the shoulder. But we recover fast and mad, no trouble getting in their way again and making them lose time. Once we were in Florida, I gazed into the orange groves. Groves to the east, groves to the west, slanting corridors of citrus, the sun biblical as it set beyond them, an almighty crown of light.

Then 95 ended and I was back in Miami. Where I’d moved two years ago, fresh from marriage and shaky, true, but full of hope and vim. Such vim! LIVE IN PARADISE, the ad had said. I’d looked up at all the glass shining high in the sky, enormous white clouds pulsing. Energy in that upper air: ions spun through deepening blue, singing LIVE THE LIFE!

But below that sky of dancing ions, up and down Route 1: bill- boards for breast augmentation.

Drove east over the Venetian Causeway toward my island, Belle Isle, with Buster, Ovid, Latin dictionaries, notes, an invisible trail of exhaust. Biscayne Bay glinted green all around.

He’s been my guide through the land o’ love from the start.

Take my hand, he whispered when I was eighteen. I’ll walk you through the thickets of love and sing you strange stories to help you see. In fact I first met you, Sir Gold, the day I first read Ovid. A Tuesday: Latin in the morning, Painting at night.

I was sitting cross-legged on the studio floor when a voice like a breeze in branches murmured, Got an extra pencil?

I looked up: a golden boy’s face, hazel-green eyes as startled as mine, looking down at me.

It happens, you know. Shaft in the heart.

It took us both a moment to stir, but he’s the one who moved first. He shook his head slightly and turned.

Me: I was done. Soon I followed him helplessly from party to party, followed that torn suede jacket slung from his shoulders as he strode and laughed away. And when he happened to cross my path and those eyes caught mine—all words flew from my head.

Late at night: I’d hover mute and drunk outside his door, too miserable to knock.

And turned the pain to art.

Echo, who wanted a beautiful boy but had nothing to give, could not even speak for herself. Who’d want her? She pined and pined, wasted away, finally turned into rocks. Stones, bones. A voice hanging around in the air.

Motored over the Venetian Causeway from the tollbooth to San Marino Island, past more glinting bay, and on to Di Lido Island and Rivo Alto, passing palazzi, modern white boxes, extravaganzas of blossoms and fronds.

Which made me think: DRAW BRIDGE A HEAD.

Of him. Again. A joke he once made when by magic I sat with him somewhere, trying not to melt in his eyes.

He drew it and slid the picture my way. Two men and between them, a breast on a leash.

See? he said, see? And laughed with himself, looked hurt that I didn’t, tucked the picture away.

But the girl he finally married instead of me when I was too much trouble: that’s the kind of cancer that took her.

The bell clanged cars to a stop at the drawbridge, so I got out to watch the bridge slowly split. Walked to the edge of the grassy verge and looked over the water to my island. Belle Isle, once called Bull Isle for the bulls that used to graze there, before a new, more belle clientele moved in. On it my building loomed huge and gray.

The yacht nosed between the piers and glided near, long and sleek and shark-gilled. On its snout lay a black-haired girl in a moon-white bikini. As she drifted past, she tilted her head to the setting sun, and her eyes fell upon me. We gazed at each other through filmy air, her flesh emitting light.

From NINE ISLAND. Used with permission of Catapult. Copyright © 2016 by Jane Alison.

Jewish Literature Isn't Dead: It's Being Written By Women

Nell Zink: How to Become a Novelist in Ten Easy Steps 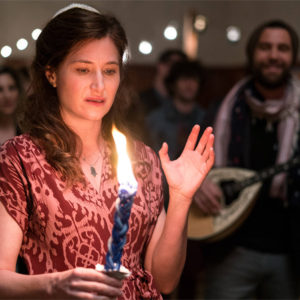 Jewish Literature Isn't Dead: It's Being Written By Women Like many bibliophiles, I’ve followed the recent wave of reviews of Jonathan Safran Foer’s new novel, Here I Am, with...
© LitHub
Back to top