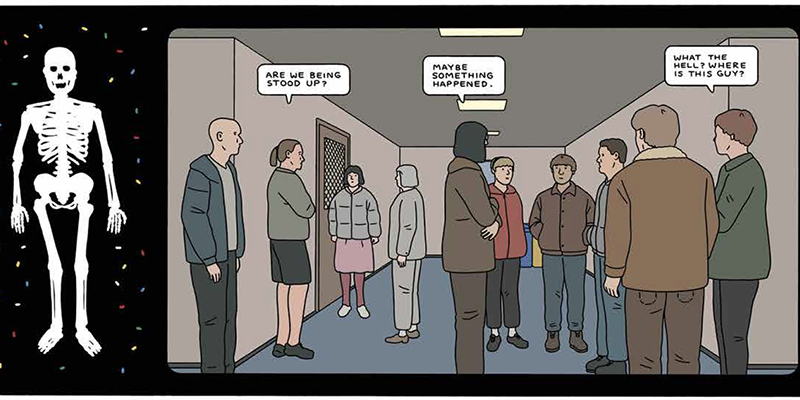 Nick Drnaso: Can You Write Good Characters That Don’t Share Your Worldview?

*
On his style on drawing and character development:

Maris Kreizman: How do these slightly lonely or isolated people find the courage and the will to want to come together with this group of strangers… to act?

Nick Drnaso: If you can’t help but write characters that are somewhat similar in temperament to yourself, or kind of share your worldview to some degree… it’s like thinking about what you would associate with the traditional actor personality, someone who is performative or comfortable or who are seeking the spotlight, and then placing these people who maybe shouldn’t even be there, or just accidentally found themselves in that environment.

When I was thinking about different scenarios it was pretty easy for me to rule out the idea of an eager young wannabe celebrity kind of person. I tried to avoid all those tropes and make this a little bit left of center in terms of what you would think of an acting class.

Maris Kreizman: And your style of drawing is so signature in that so many of your characters have emotions that are hard to disseminate, seemingly expressionless. And when we act, at least the amateurs, we go the way of expressing ourselves too much. Tell me about drawing these people struggling to act in your style.

Nick Drnaso: That was kind of a question that I never quite settled every day while I was sitting at the drawing table making all of those thousands of practical decisions about how to set a scene or how to render the faces. All I can say is that I guess I just did my best approximation of what I thought fit with the flow of the story and somewhat matched the emotions of the scenes.

But I knew at the outset it was gonna be a challenge, coming off of my last book [Sabrina} where all of the characters generally look the same and don’t emote much in their faces. Trying to figure out how to have characters have more variety in their expressions. But now that I look back I think I still veered toward that kind of expressionless thing that I can’t get away from once I actually start working on a story day after day. For some reason all of those broader expressions that I try at the outset end up getting pared back.

Or if I go back and re-draw something, it’s to make it more neutral because I find that for whatever reason, something that’s really bold or expressive will just seem kind of clunky, or I just don’t have the sensibility to integrate it into a story when mostly I’m just concerned with readability and flow.

Nick Drnaso was born in 1989 in Palos Hills, Illinois. His debut, Beverly, received the Los Angeles Times Book Prize for Best Graphic Novel. His followup, the graphic novel Sabrina, was a New York Times Notable Book of 2018 and received nominations for the Booker Prize, the Eisner Award, the LD and LaVerne Harrell Clark Fiction Prize, the Orwell Prize for Political Fiction, and the New York Public Library’s Young Lions Award. Sabrina has been published in fifteen countries. Drnaso lives in Chicago with his wife and their two cats. 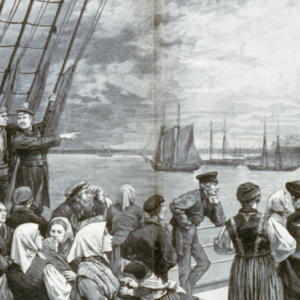 In 1959, American businesswoman Ruth Handler, along with her husband, Elliot, the cofounder of Mattel, invented the Barbie...
© LitHub
Back to top