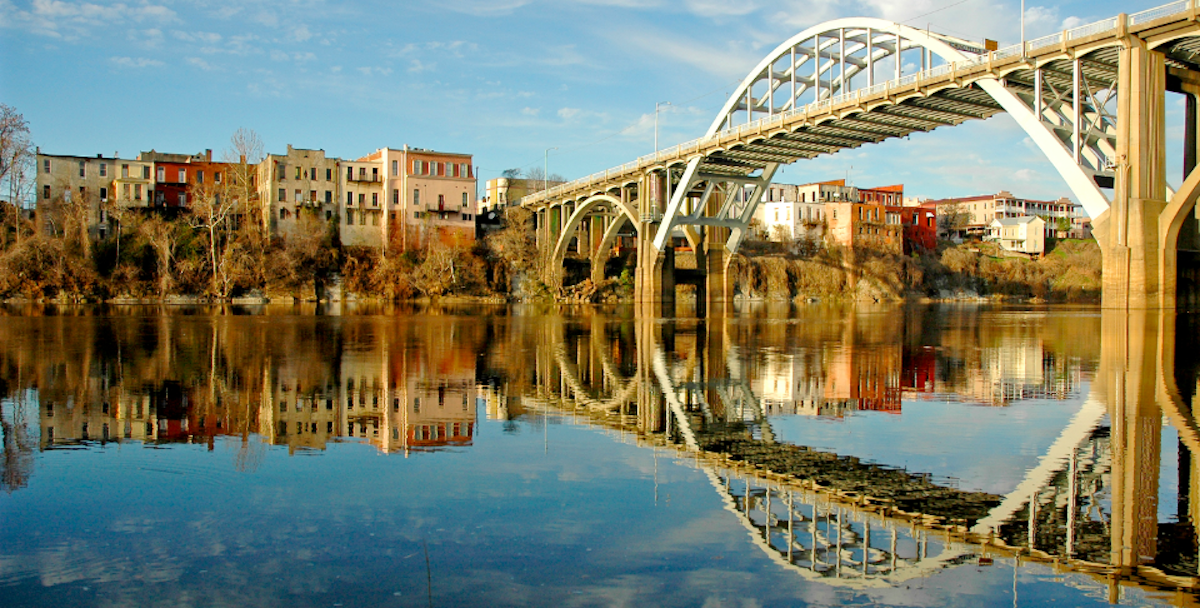 Never Again: Why We Must Vote

We were rushing that day in Selma—our two little girls, my husband, and me—rushing to beat sunset, rushing to beat twilight, rushing to beat dusk, all that would, in time-honored succession, eventually leave us in complete darkness (if we didn’t make it), shrouding our awestruck treks back and forth across the infamous Edmund Pettus Bridge.

We were in the same county that put now-Democratic Senator Doug Jones back into the Alabama senate race or, in the words of the Reverend Bernice King, pushed him “ahead for good,” and from there on to victory, in last year’s special election.

We were in the same county where one of my great-great-great grandfathers is listed as a “qualified” voter in the voting registration records from 1867, with a near-calligraphic cursive “C” by his name for “Colored,” and where my paternal grandmother inhaled and exhaled her first breaths of Alabama air as a newborn, at a time of intensified disenfranchisement for Black people in the state, even though exactly one month earlier women in our nation were granted suffrage after all their suffering.

We walked slow. We walked fast. We walked with purpose that day in Selma. My family and me, on one of my history detective trips. This particular adventure taking place on Martin Luther King Jr. Holiday weekend, 2016. The search: tracking the peripatetic journey of Nicholas Said, an African-born American Civil War Veteran of Muslim heritage who had come to our country a free man and had been last seen in Alabama teaching Black children in Selma and other cities, in his earliest years there, but by the late 1890s, was possibly trapped in the state in slavery by another name: the convict leasing system.

What my children saw first was a gargantuan bridge. What my husband saw first was the site of a historic march. What I saw first was a collage of deliverance, my family in the foreground, me trailing in the back, the Alabama River to my left, my right, and beneath, steel-arch bridge beams high above, and light, amazing white-yellow light, from the still-visible sun, casting rays in a westward path across the water. A path that would later leave me in a fit of uncontrollable tears when I learned it led all the way from Selma to its cradle in Mobile Bay: all the way to that city where my father was born into an Alabama so seamlessly racist it stung you raw while concurrently, sickeningly, normalizing the pain.

Once a white customer yelled this at my father, when he was just a little boy selling the Mobile Register on a corner in his hometown.

This my father asked his mother, upon returning home. “That’s what they call us,” is all she replied.

Not very far at all from where that ignorant white man had sought to rattle the dignity of that little boy, who’d one day become my father, whose only crime had been trying to make honest extra change from the thick stack of paper under his arms, while excitedly shouting out, “Mobile Register! Mobile Register!” I stood under a redder, softer, more rapidly disappearing sun than I had experienced in Selma the day before.

I stood at the furthermost point of a T-shaped pier on Mobile Bay. The pier placed me out a good thousand feet, it seemed. Water surrounded me in every direction save for behind. As far as the eye could see, there was only water. I could not see where the inlet called Mobile Bay ended and the Gulf of Mexico began, or where that ocean basin ended and the Atlantic began. I only know that, on an ethereal level, I had already reached the ocean. Everything, everything suddenly felt tremulous under my feet.

My heart beat fast but I did not run. If I run, I thought, something might give way. I told my family they should not lean against the wood railings of the pier, but they were slow to move. I felt desperate for them to stop leaning. They looked at me odd.

“We were in the same county where one of my great-great-great grandfathers is listed as a “qualified” voter in the voting registration records from 1867.”

My husband could not understand why I was afraid. The water is shallow in this part, he said. I could not articulate my truth in the moment: it was the confluence of things that had me shook.

The things I carried, they did not.

When we had headed from Selma toward Mobile the evening before, so, too, had the Alabama River been heading there, joining with the Tombigbee River about 50 miles before reaching the city, to form the Mobile and Tensaw rivers, both of which discharge into Mobile Bay. It was the Mobile River that bordered the predominately Black area of Mobile where my father, in his early years, grew up: the area called “Down the Bay.” The Mobile River bordered it from the east, before it moved on to its cradle in Mobile Bay.

The exact same Mobile River that, as an eight-year-old, my daddy often walked to with a croaker sack, draped over one shoulder, so excited about the possibility of filling his rough, tan burlap bag with crabs he planned to catch with his bare hands.

The exact same Mobile Bay from which Nicholas Said departed on a Tombigbee River steamboat to his final known place of freedom, about 90 miles north of Mobile, in Bladon Springs.

Standing on the pier, I didn’t know all the specifics then but I somehow felt it, deep, flowing within me, strong. The things I carried.

I prayed all the way back to the banks.

I prayed for people I carried but had never known.

People who survived their forced transatlantic journey, and people who did not, forever lost at sea.

People who Nicholas Said, after having lived in the United States for only three years, had already started referring to as “my people” and had joined the Union Army ready to die so that his people might live… free.

People, some of them for sure among those brought ashore, who were my own flesh and blood people; people whose DNA was my DNA.

People who had arrived in the Port of Mobile as early as 1701 and were sold on the shore of the bay, or, in the earliest days, laid out flat on barges, like timber, and floated up the Alabama River, sold on the banks of places like Selma and Montgomery—a path that destroyed the wholesome family life structure the likes of Roy Moore imagines were allowed to exist during slavery; instead there were, too often, only mothers, fathers, brothers, sisters, and innocent babies ripped apart from each other.

People, also, who had arrived on the last known slave ship, over half a century after the Act Prohibiting Importation of Slaves took effect in 1808, snuck into Mobile Bay in 1860 with a plan to pass them off as part of the existing U.S. slave population of over four million souls.

People from that ship who were to be sold, like so many before them, on an auction block in downtown Mobile just a few minutes’ walk from where my father, a century later, would play with marbles on the front porch of a red shotgun house with a dirt yard.

People, too, on that ship, the schooner Clotilde, who were Black, and Muslim, and female.

And what about me?

I am like so many others, among the discounted when it comes to thinking about the voting public.

When Roy Moore disparaged Muslims, I’m sure he didn’t think about how that would fire us up, the second largest religious group in Alabama.

“I prayed for people I carried but had never known. People who survived their forced transatlantic journey, and people who did not, forever lost at sea.”

That legacy which took my grandmother’s sixth son, who’d grown up to join the United States Army only to be shot down by police on a bridge in Mobile one Christmas Eve, the cold water flowing beneath, his warm blood flowing in the street above, eventually finding its way into Mobile Bay.

Let them all keep counting out our voices. And we will vote them out.

We will get there by sharing our stories, and hearing the stories of others, amplifying the voices of those who have been muted, all too often.

We will get there by fighting for the environment, quality education for all, the elderly, children, veterans, people with disabilities, dignified healthcare, jobs, better infrastructure, and against societal harms like the prison industrial complex—and that is just the beginning.

I think now of my Muslim daughters who, despite the rain, went knocking on doors with their daddy this past November to help get out the vote for Ralph Northam, Virginia’s now governor.

I think now of that day in Selma, almost three years ago, how they hugged their little bodies up against the rails of the Edmund Pettus Bridge, stretching their necks to examine the river below, which most surely had born witness to the extreme violence along its banks, meted out to Black people during my father’s childhood, simply because they wanted to register to vote.

We had all stopped our trek in that moment, my husband, my daughters, and me, to appreciate the water’s calm, its rich, almost thick brownness a marker of all the fertile forces within it, living and once-living.

“It’s like chocolate, but you can’t taste it,” my oldest daughter had said, filled with awe.

And now I think of something else:

How we cannot let the Roy Moores of America drag our nation back to a time when so many Black bodies filled that Alabama River, how the stolen labor from those disenfranchised bodies, whose blood flows in my veins, fed a nation and nourished its growth, and let it grow rich off the exclusion and oppression of others.

Never again; we must win.

Precious Rasheeda Muhammad is an independent scholar, author, lecturer and historian widely recognized for her original research contributions to the study of Islam in America. She is currently working on a book, When the Revolution Comes: Dispatches from Harvard to Africa. The book reveals eye-opening intersections between the story of an African-born Civil War veteran, her own centuries-old American family history, and the greater story of race and religion in America. She holds an MFA in Creative Writing from the University of California, Riverside-Palm Desert and an MTS from Harvard University. She lives in Virginia with her two young daughters, Mirembe and Nyota, her niece, Imani, and her husband, Carl. Online she can be found at www.preciousspeaks.com.

Jane Coaston and Alexander Chee on Politics, Storytelling, and the Midterms

Lewis Lapham: Of America and the Rise of the Stupefied Plutocrat 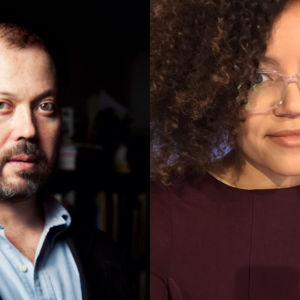