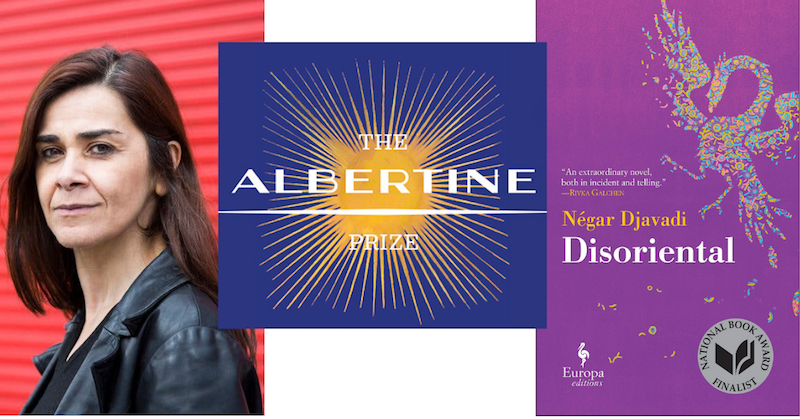 Disoriental, Négar Djavadi’s novel that explores the epic journey of a family over three generations between Teheran and Paris; was named winner of the Albertine Prize 2019, co-presented by the Cultural Services of the French Embassy and Van Cleef & Arpels.

The annual reader’s-choice award recognizes US-based readers’ favorite work of contemporary French fiction translated and published in the US. The $10,000 award honors the author and translator of a French-language novel published in the U.S. during the previous year.

Disoriental follows the family history of Kimiâ Sadr as she sits in the waiting room of a Parisian fertility clinic.

While  alone amid couples, family narratives and personal recollections mix as her thoughts wander from her grandmother’s birth in a late 19th-century harem in northern Iran through her childhood in Tehran to her present incarnation as a 25-year-old French-Iranian punk fan. Throughout the novel, moments of Iranian history, politics, and culture punctuate stories of family drama and triumph.

“By exploring the nuances between the intersection of eastern and western cultures in Disoriental, Négar Djavadi sheds light on one of the many facets of French culture” said Benedicte de Montlaur, cultural counselor of the French Embassy. “Now in its third year, the prize received more votes than any other year, a testament to the growing appreciation and need for international literature in the United States.”

Europa Editions was fêted tonight at a celebration at Albertine, the acclaimed bookshop of the Cultural Services of the French Embassy in New York City. Négar Djavadi and translator of Disoriental, Tina Kover, received the award during a ceremony hosted by the Prize’s honorary chairs, American author and translator Lydia Davis and French literary journalist François Busnel.

Along with the winner of the Albertine prize, the winners of the Prix Albertine Jeunesse were also announced. This reader’s choice award invited children between 3 and 11 years of age to choose their favorite book from a selection of works of Francophone youth literature that are available in English translation. The prize seeks to reinforce the practice and love of reading among children. This year’s winners are:

More information here; all of the books are available at Albertine Books.

Négar Djavadi was born in Iran in 1969 to a family of intellectuals opposed to the regimes of the Shah, then of Ayatollah Khomeini. She arrived in France at the age of eleven, having crossed the mountains of Kurdistan on horseback with her mother and sister. A screenwriter, she lives in Paris.

Tina Kover has been a literary translator for over a decade, translating works of both classic and modern literature including Alexandre Dumas’s Georges, the Goncourt brothers’ Manette Salomon, and Mahir Guven’s Older Brother. She studied French at the University of Denver and the University of Lausanne, Switzerland, and later worked in Prague teaching English as a foreign language. Her translation of Négar Djavadi’s Disoriental was also a finalist for the inaugural National Book Award for Translated Literature and for the PEN Translation Prize.

Albertine  is a reading room and bookshop that brings to life French-American intellectual exchange. A permanent venue for free events and debates, the space offers more than 14,000 contemporary and classic titles from over 30 French-speaking countries around the world. www.albertine.com.