Michael Frank on One of His Mightiest Relatives

Most every family I know has at its core conception of itself a founding myth. Almost always this myth concerns an act of courage, or daring, or imagination, or luck—some leap, anyway, that long ago channeled hardship into an action that brought about transformative change and set an example (typically an unreachable one) for many generations to come.

As transmitted by my screenwriter aunt, Harriet Frank, Jr., who was our family narrator, the central myth of our family concerned my paternal grandmother and the way she reinvented herself in 1939. After ten long and unhappy years toughing it out during the Depression in Portland, Oregon, Huffy (as she was known in the family; she was Harriet Frank, Sr. to the world) packed her two younger children into the family car, a 1934 Nash, and moved to Hollywood. The way my aunt told (and told, and told) the story to me and my brothers when we were growing up, our grandmother “lucked” into an interview with Louis B. Mayer, who was then head of MGM. Dazzled by Huffy’s intelligence and critical acumen, Mayer hired her on the spot—so my aunt maintained—to become one of his story editors, a job, in those days typically held by women, in which she would help find, digest, and shape the material that would be adapted into movies.

Everything that makes us the Mighty Franks comes from Huffy, my aunt said. It’s all because of her boldness and her courage that we are who we are today, every drop of it is due to her. Let her be your lodestar as she was mine. An example to live by, always!

As a child, I listened to this talk the same way I did to fairytales, where fates would turn as if by magic. But as I grew older, I began to be on the lookout for revealing details that didn’t so much prove or disprove the truth of what happened as bring it into the realm of the human, the real; maybe even the attainable.

My grandmother, it turned out, had grown up with a novel-devouring mother and studied English at Reed and, later, Berkeley—so she wasn’t simply born with some kind of preternatural innate story sense. In Portland, after years of (as she herself described it to my mother long after the fact) sleepwalking through her life, a combination of straitened finances and an unhappy marriage caused her to wake up and begin to cast about for work that suited her skills. She reported on books to women’s clubs. She wrote magazine stories. For a while she had her own radio program.  One layer went down on top of another, so that when she managed to arrange (rather than simply lucking into) an interview with Mayer—through a second cousin who was married to a Hollywood agent—the groundwork had, in fact, been intelligently (if perhaps unconsciously) prepared.

And she wasn’t hired on the spot, either: Mayer gave her a novel to read. It was called Escape, and my grandmother devoured it overnight, then returned to tell the story to Mayer the following day. (Afterward she wrote in her diary, “It turned out to be my escape.”) The fact that she aced the audition and not only got the job but held it for 15 years was impressive, yes—but not in the way my aunt intended.

I was maybe 11 years old when I first began to try to gather evidence about my grandmother’s life. Looking through her library one day, I came across a handful of personal inscriptions in the books on her shelves. Huffy’s library remained intact after her death, since she and Sylvia, my maternal grandmother, shared an apartment together, and no one touched Huffy’s books until Sylvia died four years later. This was a generous amount of time for a curious child, and later an even more curious teenager, to explore these books. What was I looking for? Hints, facts, evidence—anything that might help nuance that persisent myth that clung to our family matriarch. 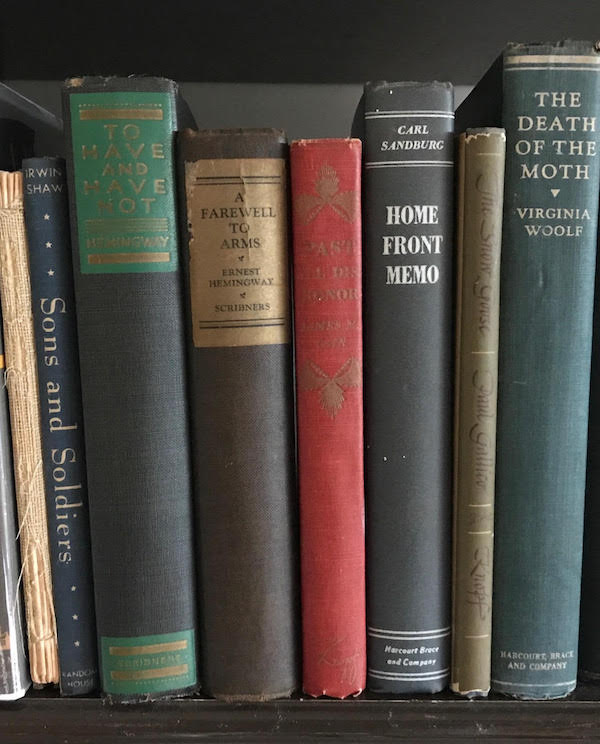 The first inscription I came across was in a young adult novel called Follow My Leader, which told the story of Jimmy, whose life is changed when he is blinded in a fireworks accident one July 4th:

To Mrs. Harriet Frank with gratitude for your help

Oversized, shaky, and sloping, Garfield’s handwriting somehow just wasn’t right. Eventually I discovered that Garfield was, like Jimmy, blind himself, which explained the handwriting; what it didn’t explain was why I became obsessed with the book, reading it maybe 15, 20 times over the next few years. It was only decades later, after I had begun writing The Mighty Franks, that I began to wonder whether Follow My Leader captured my attention so powerfully because I had been—in a very different way, obviously—a rather blind child and young adult, blind to the internecine workings of my family, blind most especially to the complex personality of Huffy’s only daughter, my dominating, larger-than-life, chimerical aunt.

Follow My Leader wasn’t the first personalized book I came across on Huffy’s bookshelves.  Further sleuthing revealed inscriptions from writers who when I was young still carried their own kind of residual mythic weight:

To Harriet Frank—who has been so very kind to me. With best wishes, Paul Gallico (The Snow Goose)

To Harriet Frank, the best-looking Scheherazade I know. In appreciation of a big fan & the hope she enjoys it. James M. Cain, Los Angeles Calif, June 19, 1946  (Past All Dishonor) 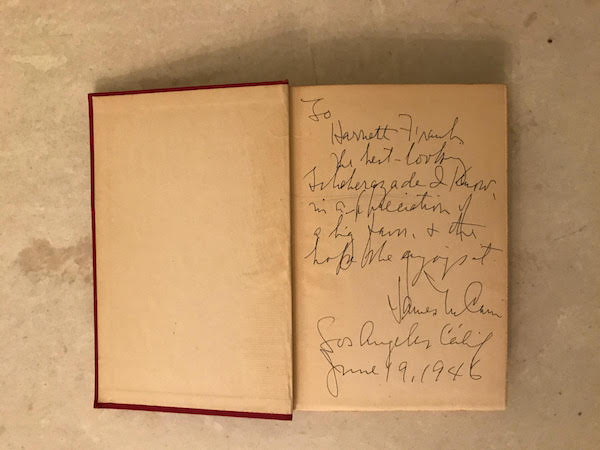 Clearly my grandmother had earned these writers’ gratitude—but why? I knew, of course, that she read and told—today we would say pitched—stories. I knew that Mayer would sometimes buy them and other times not. But what was it that she actually did when she went to sit down in Mayer’s office?

As I grew older, I developed the habit of checking the indexes of every book about old Hollywood that I came across in bookshops and libraries. Eventually I happened upon this passage in a book called The Moguls (1969) by Norman Zierold:

Harriet Frank was herself a sound actress. When she recited a story for Mayer, a table lamp was carefully arranged to highlight her face, especially to show a single tear rolling down her cheek. Almost always the tear, which she had an uncanny ability to produce, made Mayer buy the property.

All of a sudden my grandmother was there before me, in a way I could never have seen her myself. Like my aunt, she was a dramatist; unlike her, she was also a performer, who turned her talents, it seemed, to clever use. The lamp, the tear: what flair—or calculation.

In 1991 Katharine Hepburn published Me, a memoir in which I found another account of Huffy at work: “I was quite anxious to do Mourning Becomes Electra with Garbo and with George Cukor directing,” Hepburn wrote.

We didn’t get anywhere with Mayer. He listened to the whole thing. He heard it told by Mrs. Frank, his storyteller. It was customary for the heads of the companies at that time to have someone tell them the stories which were sent to the studios for possible pictures. I thought this was idiotic until I heard Mrs. Frank do it. I used to laugh at the idea of her telling stories. I was wrong. She was brilliant. I was absolutely riveted and fascinated.

A living person, a known person, who was not related to my grandmother and was therefore uninterested in idealizing her, had weighed in, and offered this glimpse into my grandmother’s professional life. And not just any glimpse, either. Imagine delivering a captivating precis of that garrulous and particularly cumbersome play of O’Neill’s? (I certainly couldn’t.) My grandmother had not only tackled Mourning Becomes Electra; she had wrestled it down. She dramatized, she riveted, yet in the end—even with Hepburn and Garbo on board—she hadn’t succeeded.

Now here, finally, was an example I could live by: you try; you fail; you return to your desk the next day and start again. It’s out of such grit that lives (and movies) are made—and books are written.  I’ll take it over myth any day.

The Mighty Franks, by Michael Frank, is available now from FSG.

Listen: Michael Frank talks to Paul Holdengräber about his new memoir, The Mighty Franks, the lives we could have led, mastering a “line,” revenge, and searching for the truth in our own past.

Michael Frank’s essays, articles, and short stories have appeared in The New York Times, The Wall Street Journal, The Atlantic, Slate, The Yale Review, Salmagundi, and Tablet, among other publications. His fiction has been presented at Symphony Space’s Selected Shorts: A Celebration of the Short Story, and his travel writing has been collected in Italy: The Best Travel Writing from The New York Times. He served as a Contributing Writer to the Los Angeles Times Book Review for nearly ten years. He lives with his family in New York City and Liguria, Italy.

Hannah Tinti on Learning to Shoot a Gun for Literature

Scott McClanahan: "Most Fiction Feels Like a Bunch of Dumb Stories" 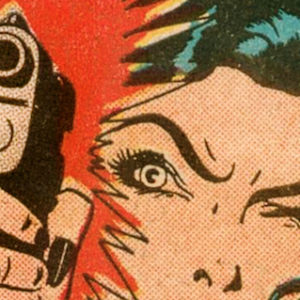 Hannah Tinti on Learning to Shoot a Gun for Literature

At the 2017 Bay Area Book Festival, Literary Hub went backstage to interview authors and panelists on a wide range of topics:...
© LitHub
Back to top
Loading Comments...