My Beautiful Oubliette: The Difficulty of Being a Writer in Prison

Dean Faiello Finds Daily Meaning Through the Act of Writing

As I write this piece, March Madness is taking place. It is 7 am and my fellow prisoners are gathered in the dayroom of the Cayuga Correctional Facility around a flatscreen TV, reliving last night’s basketball game. The final score was tallied eight hours ago, but the men are still fighting for points and disputing calls. Last night, a battle took place on the basketball court and in the dayroom. Men cheered, jeered, shouted and cursed.

Because it was still too dark in the dorm room to write—on the weekends, the lights don’t come on until 2 pm—I chose the dayroom, a raucous romper room of men watching sports, arguing and playing dominoes by slamming the plastic tiles down onto a Formica table. Here, even chess is a trash-talking contact sport.

Prisons are not set up to inspire writers; I have few choices of where to put down my piece of paper and write. That’s the whole idea of prison rehabilitation—limit the choices and temptations that daily life offers, and hopefully, men will learn to make the right decisions. But the reality is that many of us simply find a way to get what we want. Prison makes us smarter criminals.

Medium-security prisons offer many advantages over maximum-security prisons, but privacy, quiet and solitude are not among them. Sixty men are housed in a dorm at Cayuga, and for my first two months there, I had no desk or chair. My five neighbors were 30 inches from my face. I was in a double-bunk cubicle with two steel bunk beds, two metal lockers and 24 inches of “free” space. My bunkie had to leave the cubicle every time I sat on the bed.

Eventually, I was assigned a single cubicle, which offers a steel bed with an ultrathin “mattress,” a chair and two small lockers. It is delineated by four-foot-high metal partitions, the kind normally used to form bathroom stalls. Sometimes I write in the cubicle now, on top of my locker, in the shadows, as men snore through their ESPN hangovers. From a distance, I listen to the dayroom dialogue—the phrasing, expressions, prison slang—and catch myself repeating sentences out loud to remember them, to practice their sounds.

Prison has helped me to recognize my behavior as that of a privileged white man. The poverty I’ve endured in prison, the exploitation—paying five dollars for a jar of instant coffee on a prisoner’s salary of six dollars a week—has changed my perspective. Painstakingly, I’ve learned empathy and compassion.

I used to be deluded about the lives of those less fortunate than me as I had spent most of my free life basking in hedonism. Decadent nightclubs, expensive restaurants, exotic vacations on idyllic islands…

I would be up late, high, wandering from room to room in my ramshackle 100-year-old Victorian home; hungover, I struggled to get up in the morning and be at work by noon. In prison, the pleasure and challenges of writing propelled me to wake at 5 am, slam down a big mug of instant coffee and write—essays, letters and lectures that I present in prison programs. By 9 am, I had a small pile of pages, an accomplishment that had never happened when I enjoyed, and abused, my freedom.

Writing has also improved my relationships with family members. Wrapped-up in my own world, I had been too busy partying to spend time listening to my sister, my aunt, my cousins. But writing has inspired me to make my letters to family interesting, humorous and thoughtful. The first time my aunt wrote back to me and said, “I loved your letter. You made me laugh,” I felt I had accomplished something. Up until then, all I did was work, make money and spend it, an empty pursuit.

Before I was transferred to Cayuga, I was incarcerated in Attica for ten years. Most of Attica’s 2,000 prison cells do not have a desk or even a chair. For the first three years I wrote sitting on my steel bunk, using the top of a two-foot-high locker for a desk. Then, finally, I was approved for Attica’s honor block. For a year, I was double-bunked, with even less space than in my previous cell. But at least I had a desk—a steel shelf, really, just 30 inches wide. And I had a chair, which is a glorious luxury in prison. For seven years, I sat at my spartan, honor block-cell desk, writing essays by hand, editing them, then producing the final product on a typewriter.

I bought my typewriter ribbons from a prison catalog that offered bizarre items like clear plastic hot pots and see-through typewriters. Electric items, like hair clippers, reading lamps, fans, anything that uses power—have to be in a clear plastic case so we can’t hide contraband. There are only a few companies that manufacture such items. As a result, they are expensive and difficult to obtain. I waited weeks for my typing supplies to arrive. When they finally did, I made my three-hour trip to the package room. Sometimes I had to go back the following day because so many prisoners, impatient and angry, were waiting in line. Once it was finally my turn, I had to negotiate with the package room officer to keep more than one typing ribbon. The ribbons were bulky and expensive. At nine dollars a piece, they lasted for only 20 pages, or about 6,000 words.

“In prison, the pleasure and challenges of writing propelled me to wake at 5 am, slam down a big mug of instant coffee and write.”

Miraculously, I managed to produce several 5,000-word essays. Against prison rules, I would get copies made and submit the manuscripts to literary magazines via snail mail. Unfortunately, though, I couldn’t see my work in print. Attica’s package room prohibits prisoners from getting free publications because they are considered payment. Inmates are not allowed to earn money outside of prison.

My transparent typewriter’s life ended abruptly when I was transferred to Cayuga—a two-hour car ride that took three days in a prison bus. For three days, I was fed nothing but cheese sandwiches and warm apple juice. I lost six pounds. My typewriter was stuffed into a garbage bag and tossed into the luggage hold of the bus. It broke. When I submitted a damage claim to the Department of Corrections and Community Supervision in Albany, they responded that I had no proof that DOCCS employees damaged my typewriter. I guess they require proof on video. I should have known. In prison, you never win, whether you’re right or wrong.

Undaunted, I continue to write by hand. For the final draft I borrow typewriters from fellow prisoners in exchange of shots of instant coffee and stamps. While typing up this essay my ribbon ran out. Another one cost me a pack of cigarettes. It’s a good thing I don’t smoke.

At Cayuga’s Transition Center, I meet and talk with men who have just arrived here. I make it a point to tell them about prison writers—their work, their impact, their efforts to bring about changes in prison. To put their bid at a medium-security prison in perspective I talk about Nelson Mandela and his long walk to freedom. When men complain about not having lined paper to write on, I read them portions of Martin Luther King Jr.’s “Letter from Birmingham Jail.” I explain that he started his letter in the margins of a newspaper, using a borrowed pencil. When they doubt the impact of prison writing, I relate the story of Viktor E. Frankl and his powerful memoir, Man’s Search For Meaning.

Frankl taught me that to make my incarceration valuable, I had to find a reason to get up in the morning, to encounter meaning in life. I decided to write—about my experience, my pain, an aspiration, a purpose that had eluded me for years. I tell them that instead of pulling the covers over their heads and going back to sleep after the morning count, get up and write, to your families, your children, your friends. If you waste your time in prison, you’re wasting your life.

Prisoners often insist that they are “grown-ass men.” I tell them to act like one. In Meditations, Marcus Aurelius wrote that it is every man’s responsibility to rise early and contribute to society. If you like watching the movie Gladiator in the dayroom, then put on your armor and go into combat.

I tell my fellow inmates about the many Christmases I spent in Attica. Holidays in prison are ugly. Volunteer programs are cancelled. Recreation is cut short. We spend hours, sometimes days, locked in our cells, watching parades and celebrations on our tiny TVs. Christmas concerts and New Year’s Eve ball drops are bittersweet. Holiday dinners are baloney-and-cheese sandwiches.

I use the time I’m locked in my cell to write my way out of it. I explore my misery and vent my frustrations. My “oubliette,” my beautiful dungeon, becomes a place where I struggle to be remembered, to prove my existence.

Sometimes I tell the guys in orientation a more personal story: One Christmas morning at Attica, at 7 am, a block clerk came to my cell and told me that I had a package and that there would be a package room run at 8 am. I told him to stop with the jokes and get away from my cell. The clerk insisted that I get dressed and be ready at 8. Sure enough, at 8 my cell gate banged open. I grabbed a net bag and went downstairs. I was nervous.

While people outside were opening presents, I walked the desolate corridors, through two prison blocks and three electric gates. I knocked, lightly, on the package-room window. Prison guards are usually not in a good mood at 8 am, particularly on Christmas Day. The window opened, and a guard, without saying a word, took my ID. Several minutes later, he returned with a small box that he sliced open with a hunting knife. He removed a thick journal, thumbed through it looking for contraband. He handed it to me, then slammed the window shut. I scurried back to my cell, tightly holding my copy of The Minnesota Review. I opened it to the table of contents, where I found “Adivina,” my first published work. It was the best Christmas gift I ever received.

As I write this essay, my copy of The Minnesota Review sits in my locker. It’s doing time with me, having accompanied me through five prisons and fourteen prison cells. It offers me solace as the pre-season football bedlam fills the dayroom and battle lines form.

Dean Faiello's work has appeared in The Minnesota Review, Descant, Confrontation, and other journals, as well as Fourth City, an anthology. He is currently serving a 20-year prison sentence for first-degree assault. 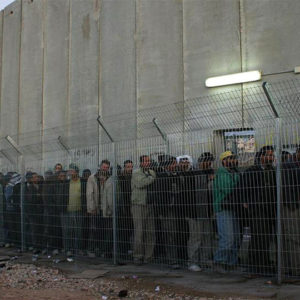 Ayelet Waldman and Michael Chabon didn’t want to edit Kingdom of Olives and Ash (Harper Perennial); they felt compelled...
© LitHub
Back to top