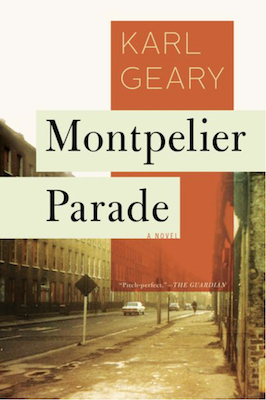 The following is from Karl Geary’s novel, Montpelier Parade. To Sonny, Montpelier Parade is a different world. Working with his father in the garden of one of its homes, he meets Vera. A series of intoxicating encounters with her lead him to feel he has fallen in love. Karl Geary was born in Dublin, and moved to NYC at 16. He has worked as a scriptwriter and an actor, and has adapted Dorothy Parker’s story “You Were Perfectly Fine” for the screen. He lives in Glasgow.

It had started to rain, but it was the gentle kind. There were fewer cars along the Strand Road, fewer streetlights too. You could hear a train bound for Bray; its engine sounded like it could smash right through you. All the while, you watched the road ahead for packs of boys who would beat you up just for meeting them. They’d push you first for fun, as if they hadn’t decided they’d hurt you. “Giz a smoke,” they’d say, or “What are you looking at?” They’d call you a queer and then you’d feel a kick from behind. Once they had you on the ground, they would exhaust themselves with kicks and punches. It was really the anger that made you cry, not the pain, but it all looked the same to them, it helped them go on.

You walked fast then, left off the Strand Road and away from the Martello Tower, away from the starless sky that hung over the Irish Sea.

You stood at the dark end of the church car park and stared across the scrub of wasteland to the lights of your housing estate. It was hard to hold your breath, hard to listen. You waited for your eyes to adjust, and when you felt brave for a moment, you ran. Through the darkness, to the other side of the high rocks, to Cats’ Den, where a huge rock jutted out to form a natural canopy. Hardly a few hundred feet from the housing estate, completely hidden. You arrived at Cats’ Den and searched around in the dark for a rock to sit on. The wet from the rock kissed at you through your jeans, and all the while you kept your hand clenched tight around your pocketknife. You waited to catch your breath.

You took out the bottle of wine and studied its label. It was a simple green bottle. Instead of a golden swallow were French words or maybe Italian words. There was no price, just a white paper scab where she had quickly pulled the tag with her nail. The kindness of that.

It was not a screw top, so you used your pocketknife to force the cork into the bottle. Its sour tang made your lips tight. You tipped your head back and took huge glugs that left you breathless. You closed your eyes and felt the liquid burn through you, past your throat to your belly and farther, warmth spreading across your groin. You opened your eyes, wiped your mouth. Warm, all warm.

Time passed, and a great silence descended, and you were no longer scared. It was as if the whole city had held its breath and tiptoed away.

You thought about having the cigarette, you even patted your hand across your chest pocket where you felt it, unbroken, but you decided to wait until you were in the dark of the cinema. Then you realized that you had an extra two pounds eighty. You could buy a whole pack of ten smokes. Carrolls were the best, the packets red, like American cigarettes.

You thought about her, how decent she’d been. You barely noticed yourself as you took another swig from the bottle. It never burned as much the second time. “Apples in an orchard,” you heard yourself say aloud, followed by your own slight laugh. You reminded yourself to keep quiet and then wondered why. After all, you weren’t afraid. Not until you heard that scraping sound in the distance, like boots over stone. You felt for the outline of your pocketknife; for years you had carried it, but then you knew for sure you could never use it. You tucked the bottle into your coat and let your thumb rest over it. Listening as the movement came slowly toward you, and you knew that someone was waiting for their eyes to adjust to the dark, just as you had done.

You remembered Sharon only then, when you saw the top of her bleached head as she stumbled through the brambles toward you. Her head was lowered, as if she were looking for something she’d dropped earlier. You called into the darkness, “I’m here.” So as not to frighten her.

“Fuck you doing here? Thought you were scared of the dark,” she says, catching her breath.

“Shut up to fuck or I’ll give you something to be scared about. You got any smokes?”

Your mother didn’t like Sharon. She lived up the road from you, and her father had two rusting cars sitting on cinder blocks outside the house. The county council had been called up, an anonymous complaint that the cars were unsightly. Her dad was a drunk and wouldn’t move them.

She found the biggest rock to sit on, the comfy rock, and took out her own cigarettes. In the spark of her match she must have seen the bottle sticking from your coat pocket. She looked off into the night. You felt shy then, taking the bottle out and sipping at it.

“Where did you get that?” she says.

“This woman bought it for me.”

Sharon pulled on her smoke, and even in the dark you could see the billow of her exhale.

“Least I’m not drinking that shite.”

She took her cigarette between her fingers and rolled it in a perfect circle. Sharon was little more than a year older than you, and since she’d left school, she could be found up here most afternoons and some evenings, smoking.

“I saw Mr. Cosgrove get killed.”

“I did, right outside McCann’s. He was drunk; he walked into the road.”

“I heard his head was nearly knocked off, that he was mangled.”

“Ah, no, he wasn’t, but it was bleeding. From his head. The rest of him looked all right.”

“He couldn’t have been all right if he was dead.”

“Was he not mangled and all?”

“No.” But then you thought of his face, that terrible look, and his body on the cold ground, and everybody staring.

“I fucking would. I never get to see anything.”

You had played together when you were children, before she’d grown and wore heavy makeup, before she had boyfriends who had cars and wives and gold rings on their pinkie fingers.

“What are you saving your smoke for?” she says then.

“I’m going to the pictures,” you say, and heard yourself draining the excitement from your voice. You were lit up by the night, and Sharon couldn’t join you there, so you felt across the wide distance for her, still back in the plain evening, and hated that sympathy you had for her.

“Do you want to come?” you say, only because you were drunk.

“Why don’t you go with the fanny that bought you that?” she says.

“Course you are, Johnny-no-fucking-mates. That’s you.”

“Do I fuck, rather drink me own piss.”

“You’re some awful ponce,” she says, and flicked her lit cigarette toward you.

You thought of Sharon that way, your bodies flung roughly together. She hugged her jacket around her. Her feet kicked in, and she leaned forward, rocking herself there. You’d come close a few times, but you’d left off, not wanting to be one of those boys who made her cry. You looked up to see if you could find a single star or trace the outline of the moon.

You wanted to go then. It was getting late, but you couldn’t face leaving her there alone, and felt trapped.

You asked her for a cigarette, she gave you one, and you sat together, swaddled in darkness, smoking.

From Montpelier Parade. Used with permission of Catapult. Copyright © 2017 by Karl Geary.

"What Am I Trying to Leave Behind?" An Interview with Jhumpa Lahiri

Dear Rick Moody: What Should I Say About My Scars? 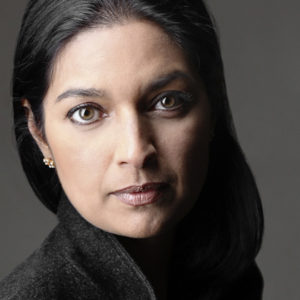 "What Am I Trying to Leave Behind?" An Interview with Jhumpa Lahiri Life is marked by unexpected moments, pockets filled with unforeseen and precious magic. In my wildest dreams, I could never...
© LitHub
Back to top