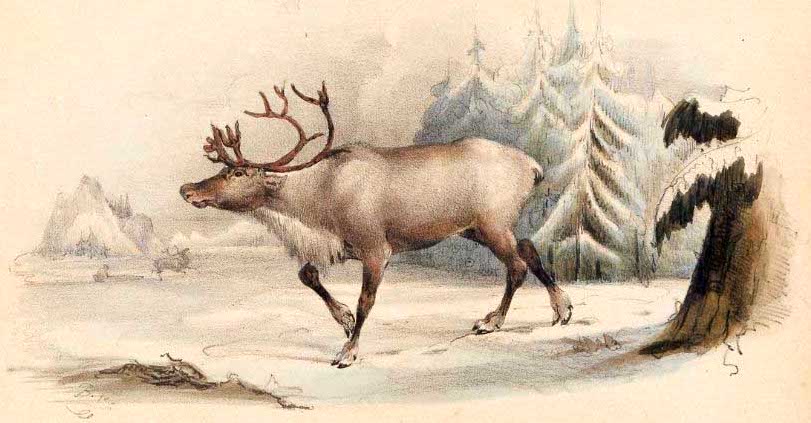 “Maybe we are all prospective migrants. The lines of national borders on maps are artificial constructs, as unnatural to us as they are to birds flying overhead. Our first impulse is to ignore them.”
–Mohsin Hamid
*

Across the vast Eurasian Steppe of southern Siberia and Mongolia are clusters of upright granite stones, carefully shaped with four flat sides and carved with stylized flying reindeer in relief. These petroglyphs, concentrated in the Khoid Tamir river valley, date from the Bronze Age, centuries before the birth of Christ. A typical motif on one face of the stones shows several fanciful reindeer intricately interlocked, each animal with legs tucked up, noses stretched into bird-like beaks, elongated antlers thrown back like wings.

Still today, the Nenet people of Siberia and the Dukha of Mongolia migrate as much as 500 miles each year with their domesticated reindeer herds. But throughout most of the world, migration has become a fraught concept, a political flashpoint. Migrant members of the human kingdom are now vilified as rapists, terrorists and barbarians. And though migration and immigration policies are fiercely debated in the legislatures of Europe and North America, perhaps this is a problem that the ruling class does not really want to solve. To paraphrase the Greek poet Cavafy, those people are a kind of solution.

But for millennia, long before there was a politics of war, sovereignty, and national boundaries, migration was simply a way of life attuned to seasonal rhythms. We migrated with the animals, first only to hunt them, then with some of them as our companions. For the food, clothing and shelter that they provided, we offered them dignity and gratitude, as in the carvings on the deer stones. And then our paths diverged. It is strange now to consider that, having used the grand transition from a nomadic to a settler species as a yardstick for progress, we humans are well on our way to being migratory again. Indigenous people like the Nenets and Dukhas, who have conserved a sliver of that zone in which all humans and animals used to coexist, carry the memory and preserve a vestige of the ancient harmonies. They may also offer lessons to help bring us back into alignment.

For wildlife as well as people, the geography of today’s migrations comprises an obstacle course of borders, a minefield of risks and interrogations.

In the western hemisphere, the First Nations that are located within the Canadian provinces preceded the country we call Canada by thousands of years. Many of those nation-territories overlap one another and spill across the 49th parallel into the northern United States. The story “Borders” by Thomas King (recently adapted as a beautifully illustrated book for children), shows us the arbitrariness of the line on a map that divides two countries. A mother and her son decide to travel from Alberta to Salt Lake City, to visit an older sister who has moved away. When questioned at the Canadian/US border, the mother states her citizenship as Blackfoot. Relentlessly pressed by the agents to declare that she is either Canadian or American, she stubbornly refuses. She and the boy end up spending two nights in a parking lot within the border zone, permitted neither to cross back into Canada, nor proceed across the line into Montana. Eventually, the mother’s refusal becomes a media sensation and, as a reward for her integrity, she and her boy are allowed to continue on their journey.

While King’s gently ironic parable exposes the legal fiction we call by the name “border,” our news is flooded with real stories of people devastated by war and environmental catastrophe. For them, border crossings by any means necessary are a matter of life or death. Many are criminalized and tortured. Ian Urbina’s recent exposé reveals a secret collaboration between the EU security organization Frontex and the Libyan coast guard, capturing boatloads of refuges and hiding them in secret prisons. Others perish at sea, like a group of mostly Kurdish migrants attempting last month to cross from France to the UK in an unseaworthy rubber raft. They drowned in frigid water, on the same day that thousands of other people crossed the English Channel in the comfort of the Chunnel train, or aboard sturdy ferries.

For wildlife as well as people, the geography of today’s migrations comprises an obstacle course of borders, a minefield of risks and interrogations.  And all over the world, as people flee war and drought to seek refuge in other nations, countless species of animals discover that the habitat corridors they have used for thousands of years have been fragmented by overdevelopment and climate change, or are simply barricaded by human infrastructure. To a gray wolf, crossing an eight-lane highway is as fraught with danger as the heavily patrolled Mediterranean Sea.

Wet, wet, the interior of the island, they said, bog and marsh, rivers and chains of ponds alive with metal-throated birds. The ships scraped on around the points. And the lookout saw shapes of caribou folding into fog.

I recently spent a week on remote Fogo Island off the northeast coast of Newfoundland. On a long hike with a local guide, we were told that caribou live on the island; but none crossed our path, or even appeared within a distant vista. The guide told us how, year by year, the seasonal ice is disappearing. This is the ice that once assisted the caribou safely onto the island in late fall, and off again at the start of spring.

Days later on the ferry ride back to the Newfoundland mainland, the boat captain announced over the tannoy: “For those who are interested, there are two caribou off the port bow.” We were in open water, and I thought I must have misheard. But there, intrepidly making the crossing alongside us humans, were the animals: two sets of antlers, two chins lifted above the choppy water, paws paddling like puppies. We lost sight of them almost at once, as we were traveling faster than they, though not nearly as bravely.

Caribou have the longest migration of any terrestrial animal. They travel as much at 3000 miles annually, traditionally southward in late fall, and north again in the spring. Though they are strong swimmers, long swims are difficult, particularly for the calves. The Arctic ice has been their terra firma; but now they are forced to cross long stretches of water. In some cases, their migration patterns may be shifting or shortening, to avoid the open sea.

The caribou of North America are actually the same rangifer tarandus species of ungulates as the reindeer of northern Europe and Russia. While the latter are domesticated, caribou are still wild. On both hemispheres, they have served as subsistence for Indigenous populations for thousands of years.  Highly adapted to extreme northern environments, a fuzzy inner coat provides a thermal layer close to the body; an outer coat of hollow hairs repels water and provides additional insulation. Their oversized hooves, with a wide curved edge, serve as snowshoes to roam the white fields in winter, as paddles to cross open water, and as trowels to forage for lichen beneath a winter layer of snow.

Collectively, we need to imagine even ourselves as migrants with wings, and the world as it really is: without restrictive borders, with birds and reindeer, us and caribou, crossing.

Our English word migrate derives from the Proto Indo European root *(e)meigw. This root is also the source of the Greek word, ameibein, giving us the name for the unicellular shape-shifting organism amoeba. Interestingly, many migrating animals are now showing “amoebic” tendencies, shifting their shape to accommodate themselves to a climate change. Studies have shown, for example, that the bodies of birds in the Amazon are becoming smaller, as a greater surface area to volume ratio allows their bodies to cool more easily. For land mammals, appendages are becoming longer, to draw blood to the extremities, again allowing their bodies to shed heat. The caribou-reindeer’s hooves may well evolve to become even more like fins, their antlers more like wings, as they adapt to a warming planet.

In the beginning of the world, the other species were our life raft. Now, in the spirit of reciprocity, we must be theirs.

–from an Indigenous origin story, as told by Robin Wall Kimmerer

The world has awakened to the reality of climate change, and to the forced migrations (both human and animal) that have already begun on its account. Yet even within the ostensibly “correct” culture of energy conservation, we define sustainability in terms of providing future generations with enough resources to satisfy our own settler-human desires. We grieve for a bare moment the migrants who lose their lives on a desperate voyage, then head for the mall. We acknowledge the sad fact of species extinction and support politicians that are working across national borders on shared goals for renewable energy; yet in the false name of progressive politics we allocate hundreds of billions to build more roads and highways, the better to efficiently deliver our ever-increasing production of things.

To be sure, there are international developments that represent a positive direction and heightened awareness of this crisis. But neither the Kyoto Protocol (1997) nor the Paris Agreement (2015) is ambitious enough to meet our moment. Both are woefully reactionary—full of turgid prose, but empty of imagination. Climate change is in full motion before our eyes, resulting in unpredictable flows of people, weather and animals. And still we produce material goods far beyond our needs, and close our eyes to those interwoven systems already, irrevocably and negatively, impacted by a century of consumer capitalism. An insurance industry supports the rebuilding of entire towns leveled by catastrophic fires. People simply refuse to move. For us settlers, to migrate is somehow a sign of failure.

Those two Newfoundland caribou likely came safely ashore, being intrepid swimmers and conditioned to extreme cold. Still, their species may not ultimately survive the disappearance of the Arctic ice floes. As for the Indigenous peoples who once migrated with the seasons and with these animals, we indoctrinated them to adopt our foolish habits, foreclosed their ancient and enduring way of life, forcibly settled them into barracks like prisons. Now, we must bend our knees and plead with them to help unsettle us.

As eight mythical reindeer prepare to fly around the world through a solstice night sky, their earth-bound cousins swim across waters that once were ice, and people from lands devastated by wars and warming weather attempt and fail their own icy water passages. This is the shared paradox of our time: a project that for centuries has made taming the wild its core mission has trapped us in a wilderness of a different kind. From where we are now, no accords or protocols can show us the way out. Instead, collectively, we need to imagine even ourselves as migrants with wings, and the world as it really is: without restrictive borders, with birds and reindeer, us and caribou, crossing.

Jill Stoner is Professor of the Graduate School at the University of California, Berkeley, where she taught in the department of architecture for 28 years. She recently completed a six-year term as Director of the Azrieli School of Architecture and Urbanism at Carleton University. Her first book, Poems for Architects (William Stout Publishers 2001) is an anthology of 48 poems that reveal the transformation of our spatial sensibilities in the twentieth century. Toward a Minor Architecture (MIT Press 2012) unravels the myths of architecture’s colonial history through literary references, and advocates for a more politicized approach to the build environment. She currently writes for a wide range of publications, including Canadian Architects, Inside Higher Education, and The Los Angeles Review of Books.

The 8 Best Book Covers of December

Jane Smiley on Her Writing Process, Beloved Pets, and Writing in Paris 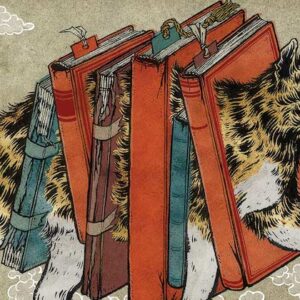 The 8 Best Book Covers of December