Memoirs of an Ex-Prom Queen 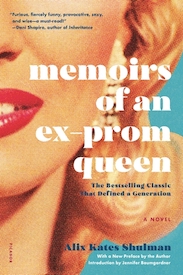 The following is excerpted from Alix Kates Shulman's reissued novel, Memoirs of an Ex-Prom Queen, originally published in 1972 and considered today to be a classic work of fiction, born of the women's liberation movement. Shulman is the author of three other novels, the award-winning memoir Drinking the Rain, two books on the anarchist Emma Goldman, and three children's books. She divides her time between New York City and Maine.

Since it is night time, it’s almost impossible to admire the view; instead we start admiring stars. I wish quickly on the first one, but I know it won’t work. The headache hasn’t worked. Sulking hasn’t worked. Not even a miracle is going to get me home free from a 20-dollar date, even ( especially) one I never wanted. If a man can’t collect on his investments he must admit to being a fool. The only question is: How cheaply can I buy out? What will I have to pay him to let me go?

I identify the Big Dipper, the Little Dipper, the Five Sisters, Cassiopeia, and the North Star, hoping my erudition about the night sky will preclude getting romantic.

“You mean that one, there?” says Jan, pointing at the North Star from around my far shoulder. Once over, he keeps his hand around me. I move close to my door, but the arm moves after me and then the man. I try to remember some other constellations, but they have all deserted me.

I ask for a cigarette. After it is presented and lit, back comes the hand. I try the radio. That too he manages to use against me. “You are too beauuuu-tiful for one man alone,” he croons and exerting pressure on my captive right shoulder attempts to probe me with an opening kiss.

Disgusting! “You are too beautiful,” he moons, coming up for breath (true or not, it doesn’t matter), then presses his thick lips down on me for another.

Our teeth touch. Enough. I start out straightforwardly, pushing against his chest with my hands to let him know how I feel and to give him the opportunity to withdraw nicely. It’s like pushing a mountain: he doesn’t budge. I pull my head back at the neck. He’s not a rhinoceros but a squid!

(To pull back lower down, from the shoulders or back, would permit him almost effortlessly to flatten and mount me.) He presses in after.

He lets the fingers of his right hand slowly down onto my breast, like a date at the movies, at the same time that he begins blowing into my ear. After taking the precaution of crossing my legs I reach up toward my breast and grab his fingers. But he must think I simply want to hold hands, for instead of pitching the battle over the breast, he slips his other hand up my skirt, carried away, I guess, by his vision of his irresistible charms. When he finds the passage  locked, he tries to open it by stroking my thigh, inching higher and higher. My earlobe receives a vicious nip (“baby, baby!”). Abandoning my breast to his right-hand flank, I bring in

my remaining limbs to assist my legs.

He’s not a rhinoceros but a squid! Somehow he has got both my hands, which had been pulling at his probing arm, off the field, and with one of his extra limbs has pushed me down prone on the car seat. Oh-oh. With a single hard thrust of his knee he can now break my defenses, wedge my thighs open, and make for the opening.

“Oh baby, baby!” he replies, sucking on my ear and trying to slip his fingers inside my underpants. He thinks that a finger inside me will make me desire him; they all read the same bad books.

Assessing my position I see that this man doesn’t care in the least that I reject him. He won’t hear of it. I must submit or outwit him; he cares only for cunt. How discouraging to have come these 300 miles only to wind up struggling in yet another parked car. In flat Ohio they drive you 15 miles out into the country; in the Adirondacks they take you up 4,000 feet. In either case, once they turn off their motors and the lights it is very hard for you to get back home.

“Scorn appearances,” says old Emerson, and here I am, hundreds of miles from my reputation just dying to scorn appearances, yet as terrified of this meat chef as of anyone in Baybury Heights. What is the difference? Having come this great distance to be myself and make love freely, must I still try all the old tricks to avoid being raped? What is going on? If

Candide had been born a girl, would he too in this best of worlds have wound up being ravished on a mountaintop?

Now I know time’s up. No matter how tightly I squeeze my legs, if I don’t get Jan out of there right now I haven’t a chance. “Power ceases in the instant of repose,” says Emerson. I can’t waste another instant using the wrong tactics. Anger is out. If I scream or slap this man he’ll slap me back and unzip. Pleas and flattery are useless too. He has long since faced his needs and dismissed mine with a simple there’s only one way to handle

a woman—take her! No, I have only one resource with which to move him from his investment; only one trick in my arsenal stands a chance of working. If he isn’t to be paid off in sex for his trouble and expense he will have to be paid off in tears. It works on fathers, doctors, and teachers; maybe it will work on Jan Pulaski, making him, too, feel powerful and benevolent. If it doesn’t, I might as well save my dress and cooperate: I am vanquished anyway.

I make myself cry, sobbing and sniffling.

The virginity I defended was imaginary, but the innocence I mourned was not.

“Nothing (sob). May I have your handkerchief?”

Awkwardly he gets his silk hanky out of his pocket with his free hand and gives it to me. “Here.” More awkwardly still, from under him, I dab at my eyes.

I bawl away, no longer faking. “It’s just that-ohhhhh, I can’t tell you. Ohhhhh.” My face will be blotching up from all the tears.

It is working. I press on. “Take me home Jan. Please. You’ve just gotta take me home right now. Ohhhhhhh.”

“Okay, kid, okay, I’ll take you home. We’re going right back to the Belleview Palace. Just try to stop crying a little, will ya?” He turns on the motor. “Just leave everything to your old Uncle Jan.”

All the way down the mountain I cried real tears. The virginity I defended was imaginary, but the innocence I mourned was not. I knew I might as well go back home.

I finished out the month of July at the hotel so Fritz could find a replacement for me and I could announce my departure and collect my tips. Then, once again packing up my Emerson, I left the mountains for good.

Back in Cleveland everyone treated me as though I were daring, accomplished, and beautiful: Queen of the Bunny Hop returning home in triumphal splendor. I alone knew I had really come back in defeat.

I spent August in retreat, listening to Beethoven and studying the college catalogues, adjusting myself to my reduced circumstances while pretending to everyone that I had had an enviable and expanding experience. I so beguiled Alan Steiger with stories of my mountain adventures, and I so beguiled Angie through the mails with stories of my  homecoming, that I actually began to believe in them. When I finished peeling completely and my skin began to glow again, I felt as though it had never stopped. My parents were as sweet and soft as applesauce. And the ugly blemish I had worried over in June had by September become a tiny brown mole, a permanent “beauty mark,” which eventually I came to accept, like something I had been born with. 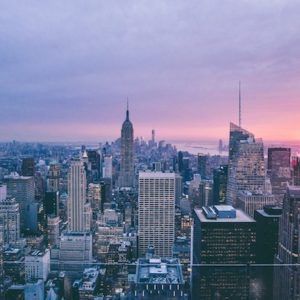 Saeed Jones on Finding a Sense of Self in New York City When I was ten or eleven years old, my mother had decided that we should take a family vacation to New York City with my grandmother...
© LitHub
Back to top