Meet Zimmy, the Quarantine Dog (Or, an Insane Response to an Insane Time)

Chris Offutt Has a Story to Tell

The new puppy is named Zimmerman. He looks like a project abandoned by a kindergarten class. They assembled him from scraps, began coloring with a black marker, got bored and started daubing at his body, then quit altogether. He’s half Australian cattle dog (aka a blue-heeler) and half chihuahua. Both are smart dogs and Zimmy is the smartest dog I’ve ever encountered. I’ve already got him playing checkers.

I’m from the mountains of eastern Kentucky, a pragmatic world where everything has a use, particularly animals. Chickens provide eggs and an occasional meal when they quit laying. Cows offer milk. Hogs supply a winter’s worth of pork. Goats will eat poison ivy, ticks, household garbage, and weeds. Cats keep rodents down while dogs will alert you to strangers or assist with hunting. All these animals live outdoors. One motto of the hills is “Humans in the house, animals out.”

I’ve never had a dog before, let alone a puppy, even more outlandishly a speckled lapdog with a black head. During my twenties, I moved often and lived in single rooms. In my thirties and forties, I was busy raising sons under restricted economic conditions, barely able to keep them clothed and fed. They never expressed interest in a pet, which suited me because we couldn’t afford the expense. In my fifties I remarried into a dog family.

My wife is from a Louisiana matriarchy. For three generations the only men were “married-ins,” such as me. I was curious how this would come into play on my first visit to a big family gathering in New Orleans heat. I loved it because nothing was expected of men. If a male in-law was sent to the store, all the women assumed he’d return with the wrong items, probably 90 minutes late. There were more dogs than children, all with common human names. In fact, two dogs were named Maggie, which became confusing. In the evening there developed a habit that to me was unusual—the women set the air conditioning thermostat very low, around 60, then lounged on couches and chairs with a blanket and a dog. It was a tradition of sorts. Only dogs and women on the furniture while the men shivered against the walls wishing we’d brought coats and gloves.

In the past 15 years my wife has mounted a slow and cunning campaign to erode my resistance to animals in the house. Three dogs worth of steady erosion. I was like a piece of soft sandstone located on the sharp bend of a river. My wife wore me down to a pebble. There really wasn’t much I could do because we’d met while she was walking her dog. A greyhound is distinctive in appearance, instantly recognizable as the logo on the side of buses. I fell in love with her the minute I saw her—the woman not the dog—and summoned the courage to win her over with my intelligence and wit. I said, “Is that a greyhound?” We’re still on our first date.

Millie was next, a gun-shy birddog who was mostly feral. Her life was lived on perpetual patrol, killing everything in her path—snake, squirrel, rabbit, armadillo, groundhog, chipmunk. A very pretty dog, she was a small English setter with long strands of hair on her forelegs like the fringe of a cowboy shirt. Nobody really liked the dog, but everyone loved her. She was fearless and friendly, but prone to spending days alone, much like me. She also refused to lie on the couch, much to the dismay of my wife.

In the past 15 years my wife has mounted a slow and cunning campaign to erode my resistance to animals in the house.

The next dog entered our lives while I was working in Los Angeles and my wife was lonely. Teenage boys named him The Punisher after the comic book character, a compromise brokered by my wife. She had the thick chest of a sheepdog and the stick legs of a Jack Russell. Her head was tiny and her shoulders gigantic. No collar would stay around her neck. She was a dainty and elegant lady, despite looking like she’d just stepped out of a cartoon strip. She spent most of her time on the couch beneath a blanket with my wife. I’m allowed on a chair. 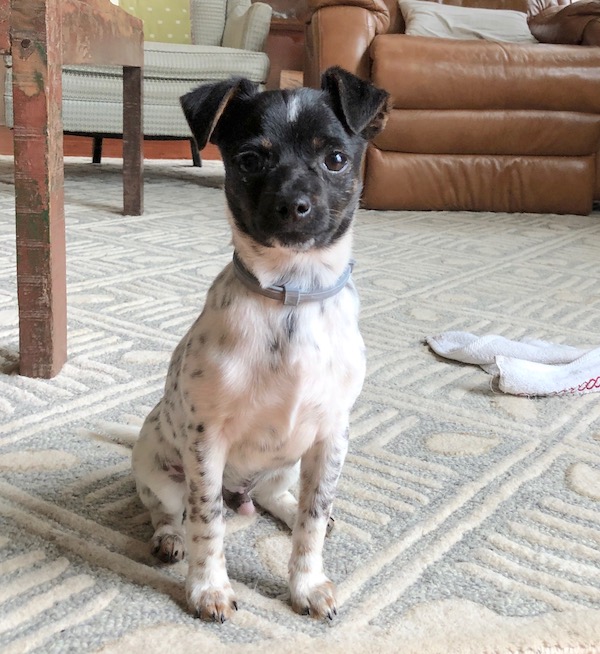 Time passed and the birddog died. We buried Millie on the property and my wife wanted a new pet—an overlap dog—to help her get over The Punisher’s eventual death. A few months ago my steadfast opposition to animals in the house had been ground to dust finer than a frog’s hair. It was new dog time. My wife generously offered to let it be “my dog” instead of hers and I shocked both of us by expressing a preference for a lap dog. I liked the idea of it—sitting by the fireplace in winter with a cup of tea, a book, and a dog. A little dog. My own dog. Heck yeah!

As it turned out, finding a small dog is difficult. They go fast. Puppies get adopted in a single day. We spent several months searching for dogs, filling out online forms, traveling to various towns. None worked out. Either the dog was already gone or it never stopped yapping, a trait I couldn’t support.

Coronavirus arrived in the midst of our search. Dogs were not moving out of kill shelters as fast as before. We had to make an appointment in advance, then drive to Tupelo and practice social distancing while interviewing the dog that went back home with us. Zimmerman aka Zimmy. I held him on my lap the entire hour-long drive. I sang Bob Dylan songs and murmured the dog’s name in an effort to forge a bond that would lead to my chair at night.

As it turns out, puppies are filled with energy and extremely curious. They chew everything in sight. They want to play, play, play—then fall into a deep sleep—and begin anew. My only experience with baby-proofing a house was plugging electrical sockets and toggling floor-level cabinet doors closed. It is impossible to puppy-proof a house. Zimmy chewed the leg completely off a chair, ate a workboot, and destroyed nine pillows. You can’t get mad at a puppy any more than you can get mad at a two-year old. My response was to take him on my lap and treat him the way I wish someoned would treat me—hold me gently and stroke my head.

Last night I built a fire, made my cup of tea, and opened the espionage novel I’ve been reading. Zimmy relaxed on my lap with his head on my arm. My wife lay on the couch beneath a blanket with The Punisher. We all felt as relaxed as possible during a lockdown pandemic. The fire crackled. The fictional spy was in danger of betrayal. Zimmy squirmed, then carefully picked his way across a chair and a coffee table to the couch. He snuggled against my wife, who draped the blanket over him. The Punisher stirred briefly. I put another log on the fire and returned to my book. Sure enough, the spy was a victim of treachery. I knew how he felt.

Chris Offutt is the author of the novels Shifty's Boys, The Killing Hills, Country Dark, and The Good Brother; the short-story collections Kentucky Straight and Out of the Woods, and three memoirs: The Same River Twice, No Heroes, and My Father, the Pornographer. He has written screenplays for Weeds, True Blood, and Treme, and has received fellowships from the Lannan and Guggenheim foundations. He lives near Oxford Mississippi.

What the Beaver Can Teach Us About Innovative Conservation

Days Without Name: On Time in the Time of Coronavirus 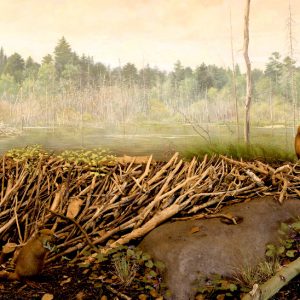 What the Beaver Can Teach Us About Innovative Conservation

The man appeared suddenly, out of the darkness and around the bend. He was standing to the side of the asphalt, near the edge...
© LitHub
Back to top
Loading Comments...