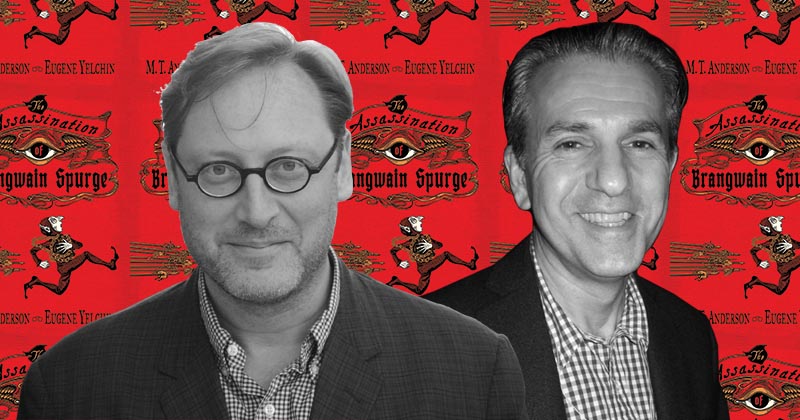 The Authors of The Assassination of Brangwain Spurge on Twin Peaks, Boris Pasternak, and Vladimir Lenin

M. T. Anderson and Eugene Yelchin’s The Assassination of Brangwain Spurge (Candlewick Press) is a finalist for the 2018 National Book Award in Young People’s Literature. It is a delightful work of political satire populated by elves, goblins, and glory. Literary Hub asked the duo a few questions about the book, their creative habits, and YPL.

I write at night. Earlier in the day, I don’t have much to say. By the time evening comes, things have happened to me. I’ve read things. I’ve thought about things. And I’m isolated as the world goes to sleep. So that’s when I start to write.

There’s not just one, but I think that my writing would be profoundly different if I hadn’t watched David Lynch’s Twin Peaks as a teen. It taught me about a particular kind of deadpan American weirdness.

Music, history, and architecture are all close to my heart. And yet people keep asking me about writing, about which I have nothing interesting to say.

There are two opposite strategies that come to mind. One is just to sit down and write anyway, lightly and randomly, turning out flimsy, quickly-scrawled material that you promise yourself you’ll throw away anyway. That kind of brainstorming might help to define the problem and get you excited about an answer.

The other method is the opposite: to walk away and work on something else. Sometimes even for a month or two. When you return, you can look at your problem objectively, from the outside, no longer so mired in the middle of it.

I wish my dogs could read it. I think they’d get a real kick out of it. Also, that cover looks highly chewable.

Obviously, I want literature as a whole to represent the astonishing variety of the world we live in. Otherwise, why read? And it’s not just about representing the full range of sexuality, but also race, culture, and nationality. This is one of the reasons that so many of us are delighted the National Book Awards have added the translation prize to the traditional roster of Fiction, Nonfiction, Poetry, and Young People’s Lit. It’s an acknowledgement that the American literary scene needs to look out more into the world. Our lives and our literature will only be enriched as a result.

Your dystopian novel Feed is a defining YA book of the 21st century, but you’ve written in a number of subgenres, rather than sticking with near future excesses. Why write so widely, and what inspired you to tackle fantasy in your latest?

Why not? The poet Auden once wrote, “Weep for the lives your wishes never led.” I want to experience as many ways of being alive and awake as I can; so it’s vitally important to me that I read widely and challenge myself to work in many different genres. It’s a way of exploring who I really am, who I might be, who I’ll never be, who I wish I were, and who I’m glad I’m not.

As for fantasy, it was always a favorite genre of mine when I was a kid. I loved those huge, fat books about bands of friends heading into realms of evil. When writing for kids who are ten or eleven, I revert to being that freckled kid again who’s reading high fantasy and amazed at the richness of the world, but also wondering what it’s like to be one of the goblins who are always chopped up without a second thought in those books, or blasted by something called “mage fire,” or buried in rock slides. What do we have against goblins? They’re a lot less smug and irritating than elves, frankly. For one thing, they sing less.

When I am uncertain how to proceed, I find that I am afraid to proceed: afraid to discover something I don’t want to discover—my artistic limitations, for example, the inadequacy of the final result as compared to the initial concept, or fear of revealing some unpleasant truth to myself. I end up stubbornly staring and staring and staring at the material and at myself in that material until I’m ready to continue.

Boris Pasternak’s Doctor Zhivago. Learning the history behind the book’s publication, learning what happened to Pasternak in the USSR after its foreign release, learning that the fictional character of Zhivago is composed of Pasternak’s own sensibilities and beliefs (including his refusal to leave the USSR while he still could) pushes repeated immersion in his text to a state of recognition—as if the events in the book are happening to me, as if the characters’ feelings are mine.

I can name a number of cultural events that have undoubtedly changed my life: watching Baryshnikov dance, for example, or watching Andrei Tarkovsky’s film Mirror. Or listening to rock and roll for the first time or listening to Joseph Brodsky reading one of his poems. Also standing in front of a Vermeer painting or sitting in the audience for Giorgio Strehler’s play at the Piccolo Teatro in Milan. I would probably have become some other person without witnessing those things.

Curiously, the advice came from a certain film director who said in my presence, “If I am afraid of something, I know this is what I need to do.”

Who do you most wish would read your book?

My parents, no longer living. They would not be able to read wondrous M. T. Anderson’s text since they could only read Russian, but I would be happy if they could take a look at my art. During my youth, having artistic talent in Russia guaranteed some sense of security, and both of my parents had sacrificed much of their security in order to cultivate my interest in the arts.

On one hand, it is frustrating that we are still differentiating humans by their sexual orientation or their race, but on the other hand, it is encouraging that YPL clearly reflects that frustration. Since YPL speaks in the voice of young people, it makes one hopeful for their future. But I don’t think that our job is to reflect our culture. Our job is to change it. You may think I am crazy to quote Vladimir Lenin, a man who turned the world upside down, but these words seem appropriate as to how we might want to be handling the issue: “I am certainly not radical enough; that is, one must always try to be as radical as reality itself.” 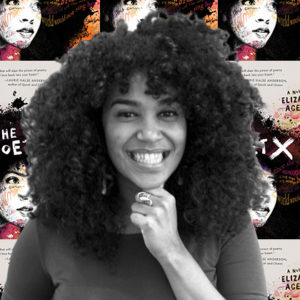