At this Week's Festival Neue Literatur, a Crash Course in Contemporary German Literature

Xaver Bayer will be appearing as a featured writer at the Festival Neue Literatur. The following excerpt is translated by Daniel Bowles.

Beware of white men, you who live on the shore.

Since eight o’clock this morning, sharp shooters hidden on the roofs and behind some windows above the large pedestrian zone in the center of the old city, where the density of luxury stores, banks, and fine restaurants is greatest, have been firing randomly at passersby. What’s more, terrorists have taken hostages and holed themselves up with them in neighboring businesses, pubs, and hotels. According to conservative estimates, as the radio would have it, thirty-four people have been killed so far, a number that is likely understated, for just in the area visible from Marianne’s parents’ apartment, where we have been since last night, we can count over twenty dead, and the pedestrian zone continues to the left and right much farther than we can see.

One of the buildings where the shopping strip begins is half collapsed and on fire because an attacker blew himself up when a special police unit was about to storm the roof. No one has any idea where all snipers are positioned and how many terrorists in all are involved in the attack. The inner city is cordoned off, and there’s a curfew. From the windows of the apartment we see the pools of blood where pedestrians were struck down; some are still lying there, while attempts were made to rescue others, but only at the outset, because rescue workers are also under fire, attested to by a burned out ambulance, among other things. We also see a dead camera team. Helicopters have been circling over the city for hours. Evidently, in the interim, one of the terrorists has been killed, although the media are still uncertain about this. Hundreds of police officers in bullet-proof gear and mobilized military units have been deployed to the adjacent alleyways. Meanwhile, several small tanks have taken up position in the pedestrian zone. For the time being the attackers are keeping quiet. Still, the air is filled with smoke and the wailing of sirens, and we continue to hear the cries of pain of those passersby who weren’t killed, just injured.

To make matters worse, today is supposed to be the hottest day of the year, as the weather report has been predicting for days. Rain is expected to offer some relief toward evening or even overnight. At present there are still no clouds in the sky.

Marianne has been in the kitchen for some time now, and I’ve made myself comfortable on the sofa, only now and again venturing to the windows to update her on the situation. Every so often I ask her whether she needs a hand, but each time she replies that she’s fine, she’s got everything under control. I’m eager to see what she has planned.

For a while I watch a live webcast on Marianne’s tablet, even briefly recognizing the building we’re in, but then I think to myself that this sort of thing is absurd, that, come to think of it, I can experience the whole thing first hand too, and so I turn away from the screen and stand at the windows again, peering first at the roof and then at the façade of the building across the way, and when I don’t see a sniper, I stick my head out. At this very moment, one of the security personnel at the jewelry store opposite us does the same thing, he sticks his head out the entrance for a few seconds, there’s a bang, he collapses, more shots follow, smoke canisters are tossed by the police into the middle of the pedestrian zone, obscuring the area, obviously they want to rescue the man without being seen by the sharpshooters, a very loud detonation then blows several of the windows on the other building to smithereens, there are screams, further volleys, and all the while, incessantly, the alarms of the fancy shops, which ultimately prompts me to close the windows and draw the curtains, too.

“Are you sure you don’t need any help?” I call into the kitchen.

“Almost done, thanks!” is Marianne’s reply.

So I go to her tablet, connect it to the speakers, pick one of her playlists, the first bars of Edward Elgar’s Enigma Variations Opus 36 ring out, I turn up the volume so that the noise from outside is at least partially drowned out, then I meander a little through the rooms of this spacious apartment: high ceilings, everything generously appointed, primarily with antique Chinese furniture, Oriental rugs, and Indian fabrics, wooden and stone sculptures from South America, African tribal art, paintings by well-known European and American modernists hanging everywhere, and at least one entire wall of shelves in each room filled with books whose value alone can be measured by their spines.

Marianne has obviously prepared for this day well. “Voilà, here is today’s menu,” I hear her voice just beside my ear and start a bit because I didn’t hear her coming on account of the loud music. She hands me a folded sheet of handmade paper. I open it and read the plan of the meal, which, written in calligraphy, is more evocative of an old official state document or codex. The order of the courses is doubtless refined and unusual:

Accompanying these dishes are select white, red, and sparkling wines, concluding with liqueur and coffee. Cigars are to be served.

“Not bad,” I say, whistling through my teeth in appreciation.

“You may take your seat,” Marianne says, disappearing into the kitchen again, and I proceed to the salon, where the table has already been set. Here, too, I have a quick gander through the windows, but nothing about the situation has changed, except that paramilitary men seem to be involved in the whole fracas now too, because there are some masked figures running about wearing fantasy uniforms, hooligans perhaps, I think.

And then Marianne is back with two champagne flutes, I thank her, we smile and toast each other’s health. Marianne whispers the brand and vintage into my ear.

“Sublime,” I whisper back, and then we sit down at table and begin the meal.

I am overcome. Each course of Marianne’s dinner seems to trump the previous one. How she’s done it is a mystery to me, the dishes are served at the ideal temperature, and my glass is always full, and there is just the right amount of everything on one’s plate so that one never risks growing tired of the dish.

“I never even knew you were such a fantastic cook,” I say to Marianne in praise.

“Neither did I,” she replies.

It’s between the last main course and the first dessert course that I ask Marianne whether she hadn’t once told me that her father owned a couple of rifles.

“Not just a couple,” she laughs, leading me into her parents’ bedroom and opening the drawer beneath the bed, and I glimpse a half dozen hunting rifles, two of which I pick up.

“And the ammunition?” I ask.

“Here you go, everything’s full,” Marianne says and opens her mother’s walk-in closet to hand me a Louis Vuitton suitcase.

“Thank you,” I reply, carrying the rifles and suitcase into the salon.

While Marianne fetches the Radetzky Kipfel from the kitchen, I inspect both rifles. Before me are two 6.5x54mm Mannlich-Schönauer rifles of premium Austrian manufacture in immaculate condition, and the shells in the suitcase are even full metal jacket bullets. The music from the next room has meanwhile switched to the second song from the Chansons madécasses by Maurice Ravel.

As Marianne returns with the next two plates, I set the weapons aside, and we continue eating leisurely, listening to the music. When we arrive at the last dessert course, a stray bullet smashes through one of the windows of the apartment and bores through a Franz Marc painting hanging above the table at which we are sitting. Amusingly, the projectile has gone directly through the breast of the horse depicted in the painting. And a minute later, another pane shatters, presumably a ricochet, and this time the projectile pierces an Andy Warhol further to the left on the wall, one from the series “Double Elvis.”

“What a strange coincidence,” I say, and Marianne nods.

She goes to the kitchen one more time and returns with a small cup of coffee, which she sets before me on the table.

“But after this I really can’t manage another bite,” I say, groaning and dabbing my lips with the napkin after the last sip of coffee.

“You won’t have to,” Marianne says, and at the same moment there is an immense detonation out in the pedestrian zone, causing the window panes to shatter inward, you can hear the sputtering of machine gun fire, and grayish-black smoke pours into the rooms.

“Should I help you with dishes?” I ask Marianne.

“No, thank you, the cleaning lady can do them tomorrow,” she replies.

“As you wish,” I say, choosing a cigar from the box she offers me, cutting it, and lighting it. After relishing a few drags, I arise, take the rifles and shove five bullets into the drum magazine of each. Then, with one of the two weapons in my hand, I look cautiously around the corner of the window frame.

“Do you want to join me?” I ask, pointing at the second rifle.

“In a moment,” Marianne replies, “I’m just going to quickly wash my hands,” and flits into the kitchen.

“I just realized,” I call after her, “I haven’t even asked you yet what I owe you for the truly sumptuous meal.”

“Oh, it’s fine,” I hear her laughing from the kitchen, “I’ll bill you later.”

“Fantastic,” I say, releasing the safety on the rifle.

In the end Marianne is standing on one side of the window frame and I on the other, we’re looking down together at the horrific scene presenting itself to us almost submissively from below, we see the smoldering grenade craters, the splintered shop windows, the corpses lying in pools of blood as if in their appropriate sauce, the burning tanks and the frantic police officers, we hear the shots and explosions and the screams and the megaphone commands and the sirens and the helicopters, and a panicked pigeon flies right past our window.

“Who goes first?” I ask Marianne.

“Me!” she cries, moving to the middle of the windowsill and opening fire. She is able to unload all five rounds before the policemen return fire and, after reloading, three more before she falls dead beside me. A shot to the head, I ascertain, in light of the brain matter sprayed onto my suit. What beautiful hair she had, I think, then I take a deep breath, assume her position in the window frame, place the gun stock against my right cheek, aim precisely, and, with measured slowness, exhale.

Xaver Bayer is a novelist and critic living in Vienna. He won the Hermann Lenz Prize in 2008.
Share:

How the Trash Gets Sorted, by Iris Hanika

Naw Much of a Talker, by Pedro Lenz 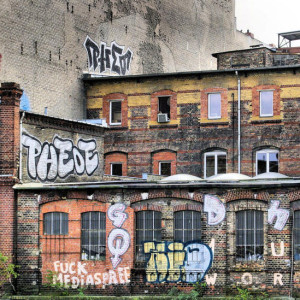 How the Trash Gets Sorted, by Iris Hanika Iris Hanika will be appearing as a featured writer at the Festival Neue Literatur. The following excerpt is translated by David...
© LitHub
Back to top