Maurice Carlos Ruffin on Being a Patriotic Black Southerner

For years, she calls, and I let it go to voice mail. I tell her: I don’t need it. I don’t want it. It’s creepy to be ruled by things you don’t understand. Things I don’t care to understand. Yet, despite my aversion to mysticism, every morning my mama leaves a horoscope on my voice mail. Some days my fate is unbelievably cheery. (I’ll paraphrase one: “Your moon is in ascension and good things are coming your way.”) Other days, my fortune sounds like a blues song. (“You been dedicated. You paid the dues. Why life been a burden on you?”). I no longer stop her from delivering these signs and symbols. She called this morning. I don’t understand it, but I listen.

In 2010, I take a photo of Dad at a family gathering. He would die in 2014. Through all the years that he was my father and I his son, he dragged me to this birthday or that celebration. Graduations. Wedding receptions. Reunions. On that day in 2010, we’re in pine tree country, near land where he and his eleven siblings were raised. He stands on a platform next to a massive grill overlooking dozens of aunts, uncles, cousins, and people we can’t even place. His bright red shirt. His dark gentlemen’s slacks. His arms akimbo. His chin lifted high as he squints into the distance. He looks like he’s about to tell the Avengers how to save the world. The pic reminds me that he always favored flag colors: red, white, or blue shirts. A coded patriotism that I only see now that I can longer talk to him, listen to him. He never talked much about his military service as a young man stationed at frosty Ramstein Air Base in Germany, except to regale me with his exploits as a catcher on the unit’s all-Black baseball squad. I see him squatting behind home plate, breath billowing from his nostrils as he drops hand signs for a curveball.

For my part, I’m overeager to return to the City. I always feel out of place among my extended family. I was a bookish kid, but rambunctious. Age and education rung some of the connection and common sense out of me like Wangero in Alice Walker’s Everyday Use. I’m wearing a suit jacket to a cookout. But Dad takes his time with each person we share blood with as if to say, “we still here, and we ain’t going nowhere.”

I’m a runner. I run six times a week. I can run ten miles on a cool day without breaking a sweat. (And no, I’ve never won a footrace. But I can outrun you.) Sometimes I wear my red-white-and-blue running outfit. As I pass them, I enjoy the surprise of onlookers. There’s something about witnessing delight on the face of a stranger. Confusion gives way to joy. The child temporarily emerges from the adult. They don’t expect a Black southerner to be very patriotic. But I’m very patriotic. I’m a Black man, and I love America.

I’m aware that’s become a controversial statement. “I love America” is something you now say if you take Fox News with your morning coffee. I get it. Every Independence Day, one of my favorite high school classmates posts Frederick Douglass’s Fourth of July speech on his Facebook page. You know the speech. It contains the line, “What, to the American slave, is your 4th of July?” I get that, too. I know our past, and I know our pain. Enslavement. Peonage. Jim Crow. I know I our present, and I know our pain. Mass incarceration. Red lining. Extra-judicial police killings. But the future is up for grabs.

I think about the heroes of the past. The ones we all know. Dr. King, Malcolm X, Jackie Robinson. And the Black women who quietly worked for Civil Rights even as some of the men in their own movement tried to erase their names from history. So I say their names: Myrlie Evers, Dr. June Jackson Christmas, Aileen Clarke Hernandez, Diane Nash, Judy Richardson, Kathleen Cleaver, Gay McDougall, Leah Chase, and Gloria Richardson. I see Ms. Richardson on a sweltering day in Maryland, her palm pushing away the muzzle of a soldier’s gun. It was the solider who feared the woman that day. And then there stood Bayard Rustin, who advised Dr. King throughout the Movement, but was pushed to the shadows by prejudice against his homosexuality. As if his skin was leprous. As if Mr. Rustin’s love of men were more dangerous than the bullet that touched Dr. King. And following them today are countless Black activists, writers, politicians, and school reformers fighting for an improbable future.

If we’re honest about the facts, the narrative is this: many thousands of Black activists as well as ordinary citizens have been dragged, lynched, dismembered, or otherwise assassinated because they wanted to vote, eat, own, or love. Some would not unreasonably argue that those people—an arena’s worth of pulsing souls—died in vain. Look at the state of the world, they say. But still we rise.

I think about the many activists I encountered in my high school years, the 90s. It seems the authorities couldn’t capture or kill all the dangerous men and women in my hometown of New Orleans who dared to create food programs for children or dared to holster a gun to their hip, a right guaranteed by the Constitution for some. By the time I met our local rabble-rousers, they were far past their prime. One such man, who had doleful eyes and a deep, resonant voice, always wore dark leather jackets. To my knowledge, he was not a Black Panther, but his jacket was a visual symbol linking him to those American revolutionaries. I always begged off becoming involved in his counter-injustice schemes. It didn’t appear to me that the situation warranted any sacrifice by 15-year-old me. I had a video game console at home and a new pair of Air Jordans on my feet that the girls at school complimented me on. But I finally heard their message: speak up, young man. You’re not free till all of us are.

I think about my maternal grandmother, an outspoken union worker. Family lore says that the house where she, my grandfather, mother, and uncle lived was burned down by people who didn’t like her speaking out. It didn’t make the paper, and I don’t think there was an arson investigation, so I can’t verify these events, but I have faith in my mother’s recollection of her own childhood. I know even less about the generation before my grandparents. I’m not a historian or genealogist. And there are some painful aspects of my ancestor’s lives I’m not ready to know. What happens when I try to trace their history before 1865?

I have vague memories of grainy black-and-white photos from my childhood—my maternal great-grandmother standing in front of a Creole cottage. Large reflective glasses on her face. Posed like that woman from the American Gothic painting, but without the man. I don’t know as much about her as I’d like. But I know that if I were transported to her time, I would be terrified to walk down her streets. But she did just that and more every day. That was her life. My grandmother told me that her mother could handle a rifle. My grandmother kept a shotgun by her headboard. I don’t think she ever used the shotgun. But she carried herself like a woman who could handle a shotgun. She was unafraid. Just like her mother.

I’m afraid of guns and don’t consider myself an activist or reformer, and I’m not entirely sure what I would give my life for. If anything. This makes me wonder all the more where they got their courage from. Their gumption in the face of a world designed to grind and gulp. I may have found an answer in film. In the middle of Guess Who’s Coming to Dinner, Spencer Tracy’s lightly racist liberal patriarch asks Sidney Poitier whether it’s true that Black people have a special sense of rhythm. Poitier denies that there’s anything fundamentally different about Black folk. Instead he says, “there’s an explanation for that. It’s our dancing, and it’s our music. We brought it here.”

Sometimes I scroll through the Internet with a sense of helplessness at the inventive new ways white supremacy manifests in the modern world.

When Buddy Bolden, Louis Armstrong, and the other early jazz musicians created the genre that formed the foundation of modern American music, they were not calling forth shadowy spirits from the heart of darkness. They were transferring musical folkways that survived the Middle Passage. That was resistant to enslavement and all the inhumanities of white supremacy. My musical ability—when I was younger I played violin, stand-up bass, and electric bass—sits at the end of a long overgrown path. I don’t play anymore. But even when I could play, jazz music mystified me. The bending of notes felt both otherworldly and technically advanced. Yet, somewhere inside me I imagine there’s a tiny jazz musician seated next to a tiny activist, waiting for their moment. Maybe they are bigger than I think.

Sometimes I scroll through the Internet with a sense of helplessness at the inventive new ways white supremacy manifests in the modern world. Who knew a white person would call the police on a Black child for selling water? Not I. Who knew a Black boy would be forced to cut his hair to conform to the visual ideal of his white coach? Not I. I can’t promise I’m strong enough to call out evil every time I see it. But I can do it here and now.

My parents were never activists. They were never rich. They were born into an America where they couldn’t sit at lunch counters. They couldn’t try on clothes the way I’ve tried them on, comparing the cuts as well as the blues and reds against their russet cheeks. They experienced slights I still can’t quite believe were common. And through all of it, they built and held onto life. Just like the generations before them.

I don’t believe that anyone really knows what the American dream is. But I do believe my ancestors lived it. Life came at them hungry and left hungry. When I despair and find myself leaning away from a world teeming with racism, I recall the power of those patriots, including the ones to which I am only linked by spirit. It took me a lifetime to see the story they gave me, to own the colors of my nation: red, white, blue, and black. 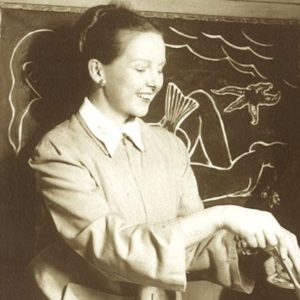 Ruth Reichl on M.F.K. Fisher's Lifetime of Joyous Eating "Please don’t whisper," whispers Mary Frances. Even reduced to the tiniest thread, her voice is imperious. The small...
© LitHub
Back to top