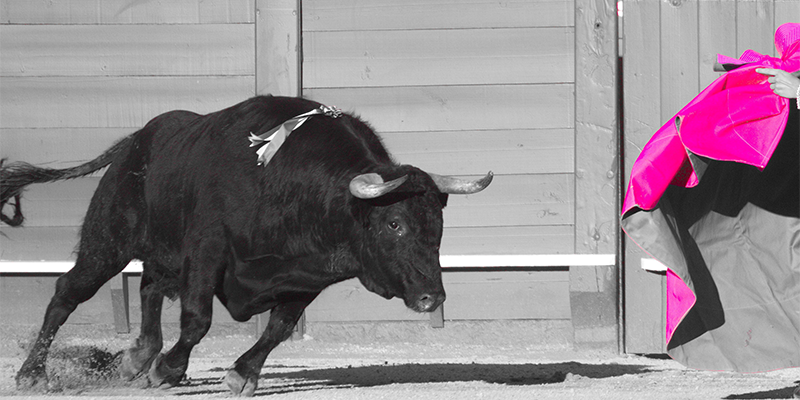 Every Saturday, from ten to noon, I pretend to be a bull. I also pretend to be a torero, shaking colored capes in my twin sister’s face as we stumble around the soft dirt of a public softball field. Children wander by, asking to be chased, shrieking as we take turns stalking them. Dogs snap at our capotes; the wind puffs dust in our eyes. An occasional observer laughs, calling out a mocking Ole!

Before taking up the practice of torear, I assumed I knew everything about bullfighting, or, rather, that I knew the most important thing: that it was wrong. As a vegan obsessed with animal rights, I could not imagine that I would enter this world as anything other than an antagonist. But less than sixty seconds into my first glimpse of a corrida, I had the horrible feeling that I was falling in love. What I thought I knew—about myself, about animals, about life and death and my relationship to all those things—I no longer knew or had never really known.

I begged a couple of teachers—an amateur torero from Spain, a former banderillero from Mexico—to train us. I was shocked to discover that we’d be devoting most of our time not to learning to think like a torero, but to think like a bull; our goal is to understand, as far as possible, how he thinks, sees, and feels. We take turns charging each other, backs bent, arms outstretched, gripping a pair of huge horns. We refuse to chase a poorly manipulated cape; we must be seduced, cajoled, tricked. There are “good” bulls and “bad” bulls; we’re almost always the latter. We snort, we wander off, we try to find the flesh beneath the silk swirling around our heads.

For three decades I have attempted to manage my fear of violence and suffering through my writing; torear gives me the opportunity to think through the same issues through—and with—my body.

It’s ridiculous, of course, but in this weird work there is tremendous freedom that comes only from imagining, in excruciating detail, the life of another being. What does he feel, how does he move, what does he desire or fear or crave? How does his being intersect with or diverge from the torero’s, from mine? How might the world appear to a creature with eyes facing sideways instead of forwards, his 1,400-pound body propelled on four legs rather than two, his every movement exposing or shielding his massive heart, the main artery of which will, if the torero has his way, be severed in front of thousands of breathless aficionados?

The milieu of bullfighting is overwhelmingly conservative, patriarchal, inclined to sneer at the anarchic-communitarian ideals with which I most passionately identify. And though I have never fought a “real” bull (nor do I intend to), I have spent considerable time with those who breed, sell, slaughter, and eat them. My relationship to bullfighting is tense, perverse; I don’t belong here, yet here I am, uneasily embraced by people with whom I have almost nothing in common aside from an obsession with the ways fighting bulls live and die.

For three decades I have attempted to manage my fear of violence and suffering through my writing; torear gives me the opportunity to think through the same issues through—and with—my body. Just like writing, the work of torear is immensely joyful, even though it is built around the things that scare me most. But no matter how much I practice, I can’t ever really know what the bull knows; the fantasy of my animal body is just that, a fantasy. The limitations are frustrating, exhausting, sad. But fantasy is my profession, and I believe there is wisdom in pretending, otherwise I would never dare to imagine any being’s life or suffering or ecstasy or death, and if I did not, then I wouldn’t be a writer, or a reader, or, perhaps, human, since to be human—or a bull—is to be helplessly in community with Others. The ways in which the world of tauromaquia imagines this community—even as it destroys a precious part of that community—is what fascinates and repels me, bringing me to our circle of dirt week after week.

I have tried, through veganism and various activisms and philosophies, to live above blood; but bullfighting reminds me that nothing will separate me from death. I have already consumed countless plants and hundreds of animals, disseminated tons of toxins, critically disrupted human and non-human lives in ways mostly invisible to me. How can anything—ritual or writing or playacting—counteract the misery of being fundamentally unable to justify the costs of my living? Bullfighting has no real answers, at least for me. Still, when I take the horns, or tell a story, I’m trying to see a way out. I know I won’t find it. But it feels good to try.

Maryse Meijer is the author of the story collections Heartbreaker, which was one of Electric Literature’s 25 Best Short Story Collections of 2016, and Rag, which was a New York Times Book Review Editors’ Pick and a finalist for the Chicago Review of Books Award for Fiction, as well as the novella Northwood. She lives in Chicago. 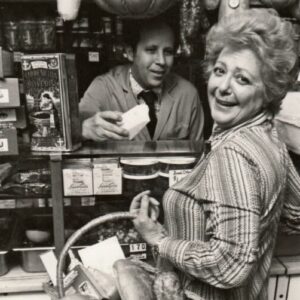 Before the pandemic hit, I never cooked. So many other demands on my time—getting drinks with friends and colleagues, attending...
© LitHub
Back to top