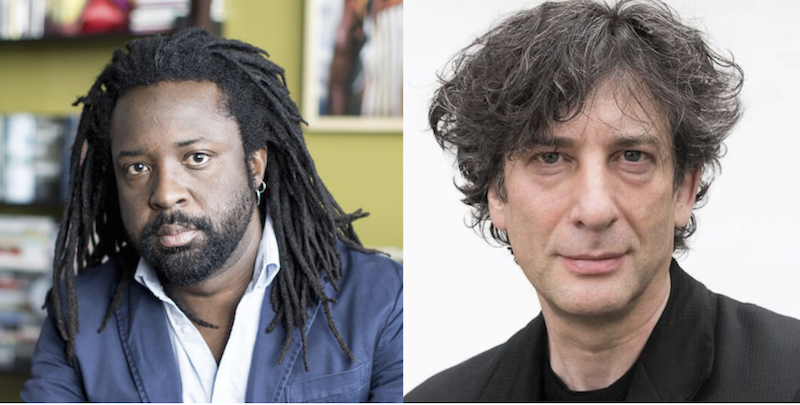 Marlon James: On the Power of Myth in Neil Gaiman’s Fiction

"He is a myth-maker, but also a dream restorer."

Thanks to Neil Gaiman, spiders now stop me dead in my tracks. This is a truly weird turn of events, worthy of one of his novels, that now, instead of trying to shoo them away or smash them, I stand frozen, and wonder if this eight-­legged brother is about to tell me something that it’s been trying to share since before the slave ships. Something that I’m only now ready to hear. I would explain more, but that would turn this into a foreword for just one novel, Anansi Boys, when this collection is so much more.

Besides, what brought me here was not spiders, but Tori Amos. This already sounds like the line of a ’90s song, and the line I’m writing about is from 1992, and is actually hers: If you need me, me and Neil’ll be hanging out with the Dream King. The lyric clearly means something to Amos and to Gaiman, but it meant something else to a young obsessive of them both. By that time, I had been reading Neil’s work for years. But that one line made me think Amos had done something else. She went into his work and found herself. I remember hearing that song and thinking, “So I’m not the only one who believes in Neil’s world more than my own.”

I still think I live in Gaiman’s world more than my own. For us mal­adjusted misfits, an escape to his worlds was all that enabled us to endure ours. I would say that Gaiman creates the kind of work that begets obsessions, but that seems too easy. All great art has its devotees, but Gaiman, particularly for other writers and oddballs, regardless of genre or art form, gives us permission to never let go of the world of wonder that we’re all told at some time to leave behind. Of course, the best writers know this is a scam—there is no fantasy world standing opposite the real world, because it’s all real. Not allegory, or fable, but real.

Which might explain why I devoured American Gods when it came out in 2001, a year that badly needed an escape into fantasy. Except that es­cape was not what it gave me. The novel proposed something way more radical: the idea that the forgotten gods were still around, adjusting quite badly to their twilight, and just because we no longer believed in them didn’t mean that they had stopped messing with us. And it wasn’t just the continued machinations of gods, but the continued importance of myths. After all, a myth was a religion once, and a reality before that, and myths still tell us more about ourselves than religion ever could. Neil Gaiman is a myth-maker, but also a dream restorer. It never even occurred to me that I needed a character to be rescued from simply being relegated to folklore, until he took the stuff of childhood rhymes, half­-forgotten, and gave them living, breathing, combative souls. Then he threw them into a present that they weren’t always ready for, and certainly wasn’t ready for them.

This collection abounds in fantastic beasts, normal people with weird powers, weird people with normal struggles, worlds above this one, worlds below, and the real world, which is not a real as you might think. Some stories travel through strange realms in three pages. Some don’t end so much as stop, and some don’t begin so much as pause and wait for you to catch up. Some stories take up an entire city, others a bedroom. Some have the stuff of childhood, with very adult consequences, while others show what happens when grown­up people lose what it means to be a child. And then there are some stories that let you off with a warn­ ing, while others leave you so arrested that peeling yourself away from them will take days.

This collection abounds in fantastic beasts, normal people with weird powers, weird people with normal struggles, worlds above this one, worlds below, and the real world.

There’s more. Toni Morrison once wrote that Tolstoy could never have known that he was writing for a black girl in Lorraine, Ohio. Neil could never have known that he was writing for a confused Jamaican kid who, without even knowing it, was still staggering from centuries of erasure of his own gods and monsters. Sure, myths were religions once, but they are at the core of a people’s and a nation’s identity. So, when I saw Anansi, on the other side of erasure, responding to being rubbed out and forgotten, I found myself wondering who the hell was this man from the UK who had just restored our story. I understood what being taken away from our myths meant for me, but I had never considered what it meant for the myth.

If Gaiman’s comics and graphic novels turned me into one kind of fan, his fiction turned me into another. I envy the person who, by pick­ing up this collection, will be reading Neil for the first time. But on the other hand, people who know all of the Beatles’ songs still pick up com­pilations, and they do so for a reason. This is an introduction by way of throwing you in the deep end, touching on nearly everything that has sealed Gaiman’s reputation as one of our masters of fantasy. And yet even for the person who’s read quite a bit of his work, there is still much to discover, even in the old stuff. Like I said, there are people who own ev­ery album but still buy the greatest hits, and it’s not because of nostalgia.

It’s that by putting these stories beside each other, a curious new nar­rative emerges: that of the writer. The excerpt from Neverwhere is bril­liant enough on its own but sandwiched between “Don’t Ask Jack” and “The Daughter of Owls,” all three pieces take on a new dimension. Put together, it’s the theme that becomes the story. The secret lives of chil­dren, the world of terror and wonder that we leave them to when we turn off the light and close the door. What happens when the door stays closed. What happens when one world moves on and the other does not. It doesn’t escape the reader that “Neverwhere” sounds similar to “Nev­erland,” another place where a cost is paid when children never grow up. But it does something to you, entering one world still feeling the effects (and bringing the subtext) of the one you have just left behind, taking the fears and wonders of one story to another. Or even better, seeing, as you move through the collection, what keeps Gaiman awake at night.

Other odd things happen in this volume. The way we read certain characters in “I, Cthulhu” shades how we react to their names cropping up several stories later. Those characters never really appear in the sec­ond story, but it doesn’t even matter. They have left such a stamp on our imagination that we barely realize that the dread that comes to the latter story is one we bring to it. The subtext of foreboding, the sense that any­ thing could happen is coming from us. This is what great collections do: recontextualize stories, even the ones you’ve read before, and give you brand new ways to read them. Together, they also reveal aspects of story you might not have been aware of when they were apart. Side­splitting humor, for instance. Humor and horror have always been insepara­ble bedfellows: horror making humor funnier; humor making horror more horrifying. The opening punch of the story “We Can Get Them For You Wholesale” is hilarious not just because of how dark and ridicu­lous it gets, but because it is punctuated by that most British of qualities, cheapness. Just how far are you willing to go, if there’s a bargain to be had? Spoiler: The end of the world.

This is what great collections do: recontextualize stories, even the ones you’ve read before, and give you brand new ways to read them.

Maybe a better comparison for this collection is the Beatles’ White Album: massive in size and scope, with individually brilliant pieces pre­sented together because the only context they need is how good they are. In this volume is funny stuff. Scary stuff. Fantasy stuff. Mystery stuff. Stories that reinforce all that you know about Neil Gaiman’s work and stories that will confound what you know. It’s tempting to say that the great thing about this or any storyteller is that he never grew up, but that’s not quite it. In fact, when I was a younger, one of the thrills of Gaiman’s work was how it left me feeling so adult for reading them.

Meaning of course that if you’ve read Neil’s work for as long as I have, then you recognize the rather wicked irony that it took worlds of make believe to make you feel grown up. These characters may have powers, see visions, come from imaginary homelands or do weird, wonderful, sometimes horrible things. But they also come loaded with internal trou­bles, are riddled with personal conflicts, and sometimes live and die (and come back to life) based on the complicated choices they make. And here I used to think that it was the fairies that were simplistic and the people who were complex.

There’s something so very Christian, or rather Protestant, about the idea of dismissing the imagination as a sign of growing up, and as a dil­igent student of dead social realist writers, I believed it. But realism is speculation too. And if you were a black nerd like me, a white family from an impossibly clean suburb experiencing nothing more than the drama of crushing ennui as they tear their lives apart just by talking about it was as fantastical as Superman.

Being no fan of H. P. Lovecraft I’ve of course saved him for the end. You can’t talk about a modern fantasist without bring Mr. Mountains of Madness into the room, which is funny given how much he would have hated being in any space with so many others not like him. But when I read Neil Gaiman, I don’t see Lovecraft at all, not even in “I, Cthulhu.” The ghost I see hovering is Borges. Like Jorge Luis, Neil is not writing speculative fiction. He is so given over to these worlds that he has gone beyond speculating about them to living in them. Like Borges, he writes about things as if they have already happened, describes worlds as if we are already living in them, and shares stories as if they are solid truths that he’s just passing along. I don’t think I really believe that in reading great fiction I find myself, so much as I find where I want to be. Because Neil’s stories leave you feeling that his is the world we’ve always lived in, and it’s the “real” world that is the stuff of make­-believe. 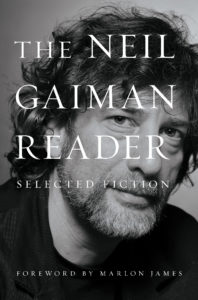 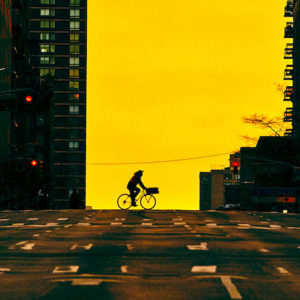 The stories we tell about ourselves say a lot about how we’d like to be seen. Here’s mine: Before it was the Pacific...
© LitHub
Back to top
Loading Comments...