Jane Ciabattari Talks to the Author of Properties of Thirst

Properties of Thirst, the new novel from Marianne Wiggins, whose Evidence of Things Unseen was a Pulitzer Prize finalist, is a complex, thorough, riveting novel. It’s massive in scope—an emotionally satisfying family saga, an exploration of twentieth-century roaming and taking, an insightful glimpse into the filming of early Hollywood Westerns, and the story of the effects on individuals of government policies like the diversion of water from the Owens Valley in California to Los Angeles and the internment of thousands of Japanese Americans during World War II at Manzanar and other hastily built, witheringly uninhabitable camps.

Virtually every page offers poetic language, conceptual surprises, gripping sensual details. It’s a sensational, near miraculous achievement, completed after Wiggins’ massive stroke in 2016. Marianne’s answers are in quotes because they were spoken to her daughter, Lara Porzak, who has been at her side throughout her recovery and completion of the novel.

Jane Ciabattari: Congratulations on completing Properties of Thirst despite having a massive stroke in 2016 when you had only a few chapters to go. How has your time while recovering from the stroke, finishing the novel, and preparing to launch it, while also dealing with the ongoing pandemic?

Marianne Wiggins: “Since my stroke I have a lot of time on my hands, most of which is spent doing healing exercises and therapies. What usually happens after I finish a novel is that I need to fill the empty space in my head, but life has provided new subjects for me to concentrate on, such as relearning how to walk—my healing protocols now take up most of my time. These therapies take place in my daughter Lara’s home (she is typing this now for me as I speak), so being housebound was already in place pre-pandemic. The height of the pandemic coincided with my 24/7 care regimen, the difference being that my daughter was now always home—the pandemic afforded me the opportunity to have my daughter’s help in committing my
words to paper to finish the novel.”

I had been wanting to write a book about California and the water shortage since coming from England where it rains all the time.

JC: What inspired Properties of Thirst? What drew you to write about this region (the Owens Valley), this era (primarily the 1940s), the Lone Pine rancher fighting against the appropriation of water by the Los Angeles water department, the history of Manzanar, the Japanese-American internment camp where 10,000 were held during World War II?

MW: “I was stunned to discover Manzanar as a National Historic Site on a road trip my daughter took me on when I moved to California from England. I was stunned to discover that we as a Nation had interned our fellow citizens of Japanese lineage during WWII. I had never been taught this nor did I know it. I had been wanting to write a book about California and the water shortage since coming from England where it rains all the time. I usually take a historical event and then populate it with my characters. When I saw the landscape surrounding Manzanar in Owens Valley I knew there was a story there for me to tell. I felt it on my skin.”

JC: In Evidence of Things Unseen, a Pulitzer finalist, you write of the buildup of nuclear science after World War I to the dropping of “Little Boy” on Hiroshima—about “physics and writing about nuclear fission… and how patently and calmly the government lied to us,” as you put it in an interview. In your new novel, the increasing value of water in a time of extreme drought today is palpable in your descriptions of the Owens Valley with its natural waters diverted through “stream piracy,” leading to “decapitated land.” Why did you pick The Properties of Thirst as the title for your new novel?

MW: “My original working title for the novel was Six Miles South of Independence, that’s the geographical location of Manzanar in California and I liked the wordplay. As I dove more deeply into my work I needed a broader title, one that suggested that this was going to be a book about WATER.”

MW: “I was trying to match the emotional territory of my character’s tales to the elements of the landscape and of thirst. When I’m writing, I see each page of the book as a canvas and I like to put in brushstrokes of phrases—in John Dollar I played with margin notes and in Eveless Eden I played with running heads—I took a word or phrase from each page and placed them above the text in the corners of the pages “running heads”—I think those margin notes and running heads, as well as the chapter headings in Properties of Thirst, set the stage for what is to play out in the text.”

JC: What was your research process for this novel? What was most helpful—documents, oral histories, travel, archives, history—as you created the world of the Rhodes family—Rocky, influenced by Thoreau, who leaves the East to establish a ranch in the wild desert in Lone Pine, California, in the Inyo mountains; his twin sister Cas, his French-born wife Lou, who dies of polio when their twins, Sunny and Stryker, are toddlers—and visitors like Chicago-born Schiff from the Department of the Interior, who is involved in setting up Manzanar shortly after Pearl Harbor?

When I’m writing, I see each page of the book as a canvas and I like to put in brushstrokes of phrases.

MW: “Seeing the topography on that original trip was the stage setting. That came first. Then I began reading about the historical development of Los Angeles and the prejudice on the ground in The United States against the Japanese after Pearl Harbor and those two things lit the fuse. To answer your question I love travel and reading written histories as my research.”

JC: In 1912, on his first visit to the Sierra Nevada, Rocky camps near Owens Lake, and witnesses thousands of snow geese swooping down on the water. Then Teddy Roosevelt handed out his “Executive privilege” to divert the water to L.A.—“Needs of the many outweigh the needs of the few.” Once the valley’s water was diverted to Los Angeles, when the snow geese attempted to land during their annual migration, they hit crusted salt, breaking their legs. Later, the toxic dust becomes a health hazard for valley residents and the internees at Manzanar. What was involved in developing the narrative thread about the roots of today’s water crisis in California?

MW: “It was a decades long learning process for me. I was born and raised on the east coast where it rains all the time, then I spent much of my adult life in England where it also rains all the time—abundant rain! So experiencing extreme drought was new to me when I moved to California. I had visited the Sahara and Egypt but I didn’t understand that there were American deserts so when my daughter moved to California, the first time I visited her I came by train because, as an expat, I wanted to experience my whole country—and that opened my eyes to the change in topography and climate that we as a unified nation experience. You can’t live in Southern California without knowing of the severe water limits.”

JC: Your opening line—“You can’t save what you don’t love”—echoes throughout the book, from Rocky’s comments on the land he fights to save through Schiff’s feelings toward Sunny. How did this refrain evolve?

MW: “I made it up! I think that’s what Rocky is to me. It came out of Rocky Rhodes. It came out of knowing his character. It has a hook and a springboard so it’s a perfect first line! That’s the springboard… if I were to make a speech for example, that opening line would reveal 30 different vistas, different narratives. It only made sense to bring it back up again in the end. This is what I think of when I think of Rocky Rhodes. And relationships could be saved if we all could love—you can’t save a relationship without love. When I’m using ‘save’ I am using it in a life guardian way.”

I am waiting for my dreams to spark my imagination, to receive inspiration.

JC: As if a counterpoint to thirst, food is a major element in this novel. French cuisine, from Sunny’s mother Lou’s cookbooks and recipe box, with notations in purple ink. Haute cuisine served in private dining cars, on cruises, in New York and Paris, when Sunny’s aunt Cas takes her on a trip when she is twelve. The food Sunny concocts for Lou’s, the restaurant she names for her mother, where she uses locally available vegetables and game (duck rillettes, trout quenelles), to serve ranchers and water department workers and Hollywood film crews. The food prepared on the ranch, from tacos and chicken soup, which Schiff and Cas make together, through a menu of Green salad, terrine of elk, souffle, claret. How did you develop this theme?

MW: “A writer’s day involves eating and a lot of drinking! I write longhand and all my notebooks have food & drink stains on them—mostly pasta sauces and red wines! I like to eat. Writing is a solitary pursuit and the dinner bell is something to look forward to! My father was a grocer and my mother’s father was a grocer—food has been part of my vocabulary, it’s in my DNA, and I love to cook. I also collect cookbooks—everything from Escoffier to Betty Crocker. I don’t watch much television, but I do love a great cooking show—since my stroke, I’ve watched all of Anthony Bourdain’s programs and the documentary series ‘Chefs Table.’”

JC: The food theme also underlines the love stories in the novel “Show me what you eat and I’ll tell you who you are,” Schiff muses at one point; Sunny’s food draws him to her at once. Cas is enthralled by Lynwood, a visitor who becomes a collaborator, after he prepares a memorable gin martini—like a “Norwegian fjord in the dead of winter,” with bay, juniper berry, coriander, mustard seed, an “exhalation” of vermouth, a blue borage flower and a single flake of salt, the “iceberg.” Did you have this in mind all along?

MW: “Yes. I like to drink and I live to eat. I made up that recipe—my first venture into mixology.”

MW: “Walking independently and living life outside a diaper! I am waiting for my dreams to spark my imagination, to receive inspiration. I am also reading a lot of nonfiction to see what sparks. I never know when or where a great story will reveal itself to me.” 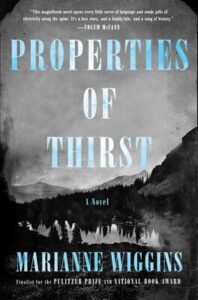 Properties of Thirst by Marianne Wiggins is available from Simon & Schuster. 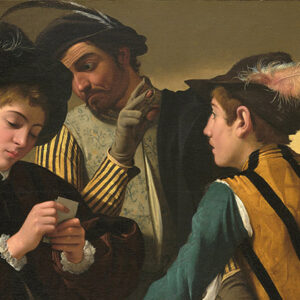